Tom Burr: Surplus of Myself

Tom Burr: Surplus of Myself

Running parallel to Münster’s Skulptur Projekte, notions of private and public are unsettled in this playful post-minimal exhibition of new works by American artist Tom Burr

The bed is not only a site where we are born, where we die and where we make love, but also a place where the state has a pressing interest – a public interest. So wrote the gay, Cuban-born American artist Felix Gonzalez-Torres at the height of the American culture wars in 1993, recalling the 1986 supreme court decision on Bowers v Hardwick, which declared sex between two consenting adults of the same sex illegal. Against this backdrop, secrecy and concealment become strategies not simply for upholding the private sphere, but doing so as an act of resistance against the disciplinary force of hegemonic culture.

Judging by its title, Surplus of Myself, you would be forgiven for thinking the current exhibition at Westfälischer Kunstverein, of work by Tom Burr (b1963, New Haven, Connecticut), is about excess rather than secrecy: a confessional breach of the boundaries of identity. But, instead, behind this headline is a strategic and carefully controlled leakage of that surplus, clues falling like drops from a pipette.

Burr’s exhibition can be seen to begin outside the walls of the gallery, with his collaboration with Cosima von Bonin commissioned for this year’s Skulptur Projekte Münster, a prestigious 10-yearly showcase of art in public space. The piece – a long black Mercedes Benz flatbed truck named Benz Bonin Burr, after its three makers – is placed in the square directly in front of the gallery. On the bed of the immense vehicle is a black wooden crate firmly strapped down by two blue harnesses. Suggestive of art transportation (the adjacent Henry Moore bronze, for instance, looks about the same size), the sculpture is a hiding place, always threatening to withdraw some object from public view.

Like a set of Chinese boxes, inside the Kunstverein, Burr’s conceit becomes clear: containers inside containers, each as communicative as they are stubbornly silent. During my visit, I was lucky to walk in on a tour given by Burr to a polite-looking, middle-aged section of the local art audience. The room is dominated by three black grid-structures reminiscent of Sol LeWitt’s famous incomplete open cubes, each acting as a stage for an ensemble of poignant artefacts. Like his works, during the tour, Burr employs the language of formal abstraction typical of 70s minimalism, in weaving around the sculptures a semantic field of descriptors without signifieds: containment and release, care and control, maintenance and authority. They are about “pinning something down”, he says, but what, exactly, remains opaque.

One of the black cubes, Broken In (2017), contains a surplus of Burr’s self: a single shoe. A rupture in the polite facade; a trace of the personal, the private, the used. Another, New Haven, 1963 (2017), is lined with black latex and displays a photograph of Yale University’s art and architecture building. The building counts as one of the earliest and most significant examples of American brutalism, and has been referred to in turn as a tour de force, and oppressively monumental. A third cube, Broken Healthcare System (2017), is carpeted with dark blue blankets. Burr buys these online, he tells the tour group, as “military-style blankets”. That they are not simply military blankets, but “in the style of”,tells us something about the symbolic, performative realm in which all these works begin to come together. In taut suspension within the black grids, the blankets and the latex, the photographs, with their implication of the potent masculinity of concrete brutalism, even the helpless single shoe, are at once held and oppressed, revealing everything or nothing at all. To the so-accustomed eye, what Burr describes cooly as formal experiments clearly belong to the language of gay BDSM and underground fetish culture.

“What about the dog collages,” the exhibition’s curator, Kristina Scepanski, asks Burr. “We are all very interested to hear about the dog collages.” Burr begins instead to talk about the neighbouring work, from 2011, Black Wall Skirt (our lady in the corner), a short curtain known in theatres as a “hard teaser”. On the stage, the hard teaser would be flanked vertically by two so-called “tormentors”, together forming the “false proscenium”, a narrow stage-within-the-stage, the purpose of which is to mask the fly system. Aside, most likely, from this irresistible jargon, Burr uses the theatre curtains (another one of which is hung at the other end of the room) to once again address issues around performativity and concealment, public and private. Issues so very actively at play even in his own presentation of the works.

“But the dog collages?” Scepanski repeats. The dog collages are three framed works from 2007, Untitled (Querelle & Mario), in which pictures of dogs are interspersed with dialogue from Jean Genet’s 1947 novel Querelle of Brest, which was turned into a film by Rainer Werner Fassbinder in 1982. “Mario: ‘But seriously, does it feel good?’ Querelle: ‘It was the first time I ever did it, so I never thought it would be like that … You’ll just have to give it a try yourself.’” Viewers familiar with either Genet or Fassbinder’s classic will know that this scene deals rather unabashedly with the delicate topic of receptive anal penetration. This might also give a different slant to the title of the cube sculpture Broken In.

“The dog collages,” Burr says, finally giving in to the curator’s request, “don’t generate a lot of meaning.” Rather, their significance is strictly personal: Burr used to live close to a park in New York City where there were a lot of dogs, and liked to go there and watch them. He also thought it a funny coincidence that the works, which he had long forgotten about, were made exactly 10 years ago, a nod to the decennial format of Münster’s sculpture projects. In an exhibition largely made up of black curtains and incomplete cubes, that these works shouldn’t “generate a lot of meaning”, is nothing short of hilarious. Yet at this moment, Burr, in his crisp white shirt, the top two buttons undone, under the black suit, keeps a perfectly straight face.

In an interview in 1995, the literary theorist Leo Bersani, known by many for his post-Aids study on the politics of homosexual desire Is the Rectum a Grave?, told Katja Diefenbach: “I think it is very important for minorities to resist the attempt to identify them in ways that would increase what Foucault called the pan-optic vision: being able to see them, and therefore able to control them more perfectly. In response to that, there was an effort, especially on the part of the lesbian and gay community, to erase so much as any signs by which they might be identified and controlled, that in the process they have nearly succeeded in erasing any specificity. The difficulty with that is that without some kind of specificity there is no point of resistance to hegemonic culture.”

What Bersani describes is a double-bind: to not be seen by the eyes of The Man, yet to recognise in one another signs and symbols around which to congregate, whether in love or in struggle. The only way to resist, he argues, would be to begin thinking, once again, about what gay specificity might mean. The surplus of Tom Burr, although purportedly specific, extends beyond the individual to form a public-private language that simultaneously signifies and conceals in precisely such a way. This happens through formal abstraction, as well as the abstraction of singular authorship by reference and collaboration: with Bonin and with Benz, LeWitt and Genet, and elsewhere in the exhibition, the collage artist Linder and David Bowie. In Burr’s clever game of hide and seek, collaboration ultimately extends to the viewer, left to discover the work somewhere between broken-in gay specificity and tight-lipped, slick minimalism. 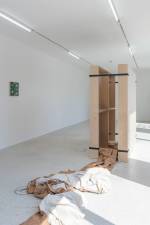