Albers & Moholy-Nagy: From the Bauhaus to the New World

Albers & Moholy-Nagy: From the Bauhaus to the New World

Two of the great practitioner-teachers of 20th-century art, Josef Albers and László Moholy-Nagy, were born in the late years of the 19th century. Both taught at the Bauhaus and were caught up in the series of cultural migrations occasioned by the rise of totalitarianism in Europe. Both men finally ended up in the US, gaining citizenship there, but despite their shared histories, their paths diverged. However, this exhibition makes good use of the structural similarity of their experiences, using it to weave a path through the turbulence of the mid-20th century and these two artists' responses to it.

The show does not dwell on juvenilia: the first works date from the early 1920s, by which time Albers was in his 30s and 'starting from the bottom' again at the Bauhaus, and Moholy-Nagy was already an internationally known artist. The first room shows Albers's 'Scherbenbilder' constructions, made from found shards of coloured glass: it is possible to see in these glowing, illuminated works evidence of his lifelong engagement with materiality, as well as an early Dada influence in the use of broken or discarded objects. Both artists' fascination with transparency and light is clear, here as throughout the exhibition. The pieces by Maholy include some of his early 'photograms', in which objects placed directly onto photographic paper leave ghostly impressions and overlapping shades.

The works on show in the next room chart Moholy's increasingly bold use of industrial materials, including enamel and galalith, as well as his progressively refined experiments with overlapping paths of colour. The beautifully modulated tones of an iconic painting such as 'A 19' are clearly a result of Moholy's deepening interest in light; indeed, as one of the statements collected in the 'Artists' Writings' section of the catalogue shows, by 1923 he thought of light as a 'new plastic medium', analogous to 'colour in painting and tone in music'.1 His continuous experimentation in photography bears this out.

Albers, meanwhile, was adapting his glass works to industrial methods. Employing skilled craftsmen to sandblast sheets of glass according to his stencils, he serialised production and removed the artist's hand from the finished work. His manipulation of certain variables, such as the colour of the glass, fits the template of formal experiment he was to espouse in his later teaching at Black Mountain College. Albers the designer is represented by a fruit bowl and a tea glass seemingly modelled on scientific apparatus, an armchair and a set of stacking tables with painted glass tops. A sketch for a coat of arms, a design for a universal typeface and photographic collages show a few of the other avenues Albers was exploring. Both artists also enjoyed a fruitful engagement with architecture, as is evident from the titles of some of Albers's glass series ('Skyscrapers', 'Windows'), and Moholy's vision of the geometry of architecture in his photograph, 'Bauhaus Balconies'.

A section of the room is devoted to the way Albers and Moholy spread the ideas of Bauhaus: stencilled onto the wall are their utopian pronouncements about education, and work by their students is displayed alongside the books that, for Moholy especially, were an important tool of dissemination as well as masterful works of graphic design. This section of the exhibition opens out into its later mirror image - a similar arrangement of quotes, books and students' works that attempts to catalogue the two teachers at work in America. While the topic of Albers and Moholy's educational legacies is potentially massive, the exhibition at least acknowledges the relevance of teaching to their everyday lives, philosophies and reputations.

Moholy's expansion of the vocabulary of photography, and his demonstration of its possibilities as a productive and not simply a reproductive art form, are the subjects of the next room. In a neat piece of juxtaposition, the curators have hung his painting 'A 20' (1927) next to his large gelatin print 'Photogram No. II' (1929): their similarity, in both size and theme, is immediately clear. This is a concise way of showing that Moholy's visual language translates perfectly between the dialects of paint and light, while at the same time illuminating his pointed claim that photography should be afforded an equal status with painting. In fact, he went beyond this, arguing in Painting, Photography, Film that, 'The traditional painting has become a historical relic and is finished with.'2

It is perhaps worth saying a little more about the photograms. Typically, Moholy's methods used objects in direct contact with photosensitive paper, and sometimes made use of non-visible radiation. This offered him an escape from the dictates of perspective imposed by a camera, and a way of improving on the human eye in the pursuit of an objective vision. Moholy's technophilia had taken on an almost mystical overtone: 'Tomorrow we shall be able to look into the heart of our fellow man, be everywhere and yet be alone ... The unambiguousness of the real, the truth in the everyday situation is there for all classes.'3 Other photographic works include Dadaist photomontages, and a series of beautiful camera shots whose perspectives and deep shadows emphasise the same abstract lines as his paintings.

Moholy resigned from the Bauhaus along with Gropius in 1928, and Albers left not long afterwards, when the Nazis closed it in 1933. The exhibition treats this as a literal turning point, veering off to the right towards a documentation of the transitional period before both artists arrived in America. Immediately before this, a room is devoted to what could be seen as the pinnacle of Moholy's attempts at making art mechanical and sculpture weightless: the 'Light Prop for an Electric Stage'. This kinetic sculpture is shown in a dim room, with a projection next to it of the film 'Light Play: Black-White-Grey'. The two interact in a silence broken only by the clunks and whirrs of the revolving object as it sends reflections orbiting the room and scattering off its many surfaces. The texture here is in the quality of light and shadow: direct, attenuated, dappled; seen through portholes, projected onto the wall, flashing momentarily into the eye.

The closure of the Bauhaus meant Albers no longer had access to the glass workshops; he produced woodcuts and prints instead, which allowed him to maintain the same authorial distance, but were more closely related to the early Bauhaus celebration of craft, rather than its latter focus on industrial design. Whether or not Albers had previously struggled to marry industry and craft, these works show a lightness and a deft simplicity that defies any sense of privation. Two particularly lovely prints are an elephant's head formed from looping, intersecting circles, and 'Easterly', whose stippled surface revels in the texture of the cork from which the block was cut.

Moholy's work from his years in Britain (1935-37) shows him turning his hand to commercial projects, with commissions for posters from Imperial Airways and London Transport, and documentary photos for various books, including The Street Markets of London and Eton Portrait. Other works show him synthesising his interest in new materials with the light/eclipse effects of the 'Light Prop' sculpture. 'Space Modulator Experiment, Aluminium 5', for example, uses a raised layer of transparent cellulose acetate to distort and discolour painted dots, partially obscured behind a holed piece of aluminium.

Meanwhile, Albers's onward journey to America is revealed in a sudden explosion of paint. There's a feverish intensity in his first brush-based works in 15 years that mirrors or perhaps extends a sense of exploring a new world. Another new and lasting engagement with the architecture and culture of Mexico is revealed through paintings such as 'To Mitla' (1940), which anticipate his famous 'Adobe Variants', and photos of the pre-Colombian ruins he visited there.

Despite this, the mood of the exhibition darkens as it progresses. The next room is large, and physically mirrors the early Bauhaus room, but the spectre of war seems to hang here. Albers's works veer between unsettling, shifting, perceptual balancing acts such as 'Equal and Unequal', and pastoral collages of leaves collected from around Black Mountain. Of course, this narrative is partially imposed by the curators, and an examination of the dates shows that some of the more sombre pieces were created before or well after the war; but it is perhaps a narrative worth accepting for what it says about both artists' responses to the unravelling of modernism. Moholy's 1946 sculptures, 'Leda and the Swan' and 'Dual Form with Chromium Rods' use translucent acrylic in redoubling, enfolded shapes; at the same time, their maker's utopian, socialist ideals were being stretched by technology's failure to deliver the future he had envisioned, and by his need to adapt to life in post-war America.

If we take 'humanising the machine' as a representative aim of one strand of pro-technological, humanist modernism, then the Hiroshima and Nagasaki bombings represent, if not its ultimate failure, then at least its final loss of innocence. Moholy's attempts to deal with this coincided with his own final illness, and a series of semi-representational paintings and crayon drawings link his leukaemia with the spectre of nuclear destruction. This biographical and historical knowledge somewhat overshadows the vibrant colour he introduced to his later works, including a gorgeous slideshow of colour photos and photograms never exhibited in his lifetime.

The final room of the exhibition is given over to Albers alone: works from two of his best-known series are shown, his 'Variants' and his 'Homages to the Square'. Writing in the catalogue, Hal Foster sets Moholy's focus on 'transparent opticality' against Albers's 'material tactility',4 and these later paintings testify to a deep awareness of the material properties of colour and form, born of long experimentation. The last 'Homage' paintings, of greys within greys, encourage an almost transcendental stillness of gaze: the endpoint in a lifetime of striving towards socially engaged, experimental art. 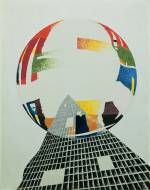 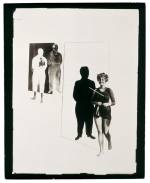 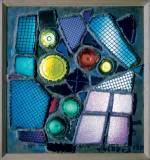 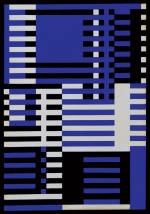