Beneath The Surface: Toby Ross-Southall and Giorgio Bruni

Camden first became a popular “must visit” location when Urban Space Man(agement) moved into the lock in the late 1970s, and craftspeople took spaces to market their work attracting tourists to swarm the weekend streets of Camden Town.1 Camden is also home to a number of well-established music venues such as Dingwalls, Jazz cafe, Barfly and the revamped Round House. Yet for all its busy bustle and hip north London vibe Camden has very few contemporary art spaces. Fortunately for NW1 this is about to change.

Toby Ross-Southall and Giorgio Bruni’s exhibition Beneath the Surface announces the opening of a new North London art space Studio #205. Recent Central Saint Martin’s graduates, Ross-Southall and Bruni have shared studio space for a number of years working both independently and collaboratively, with “mutual respect … we criticise each other’s work”.

Their film Perfecting Fee won them and their collaborators the 2010 Smoke and Mirrors 48 Hour Film competition. An edgy, uncomfortable five-minute film, Perfecting Fee begins with a nice chap thinking aloud, “talking” us into his confidence; we listen to him musing on his new girlfriend, naively following him into a nasty surprise. Ross-Southall and Bruni have turned us (their audience) into little Red Riding Hoods, in this disturbing context we are somehow left feeling complicit in his secret crime (no spoiler here – you must see it for yourselves). “We like to deal with how we navigate people round our work, the audience has a really important role, we want to be playful and give people a sense of danger.” Their prize, a West End weekend of studio, editing and technical support time, will give them the facilities to complete their next collaborative project – a film for the Cannes festival. 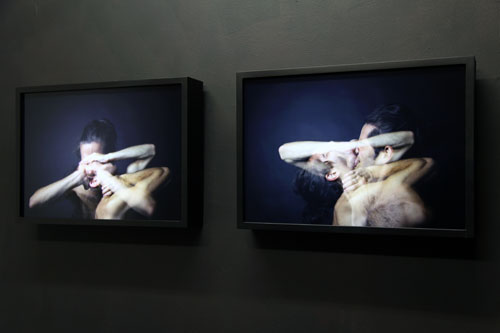 In Ross-Southall’s solo work there is also a sense of disturbance. Self-Effacement I (2010) might be two people fighting, biting, kissing or perhaps even eating each other – the work echoes Steve McQueen’s Bear 1993, in which two naked men wrestle – they are perhaps acting out of love or out of hate it is not clear. Ross-Southall’s Self-Effacement I is a multi-exposed self-portrait, “It’s to do with phatic functions and actions with uncontrollable outcomes” he explains. 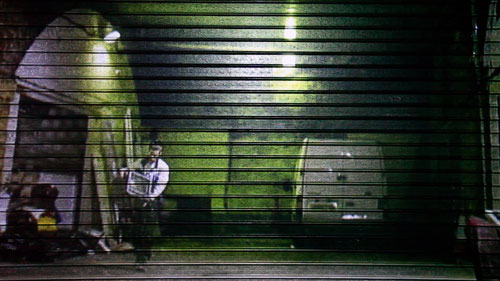 In the basement Ross-Southall’s film Self-Effacement II (Bonny Street) 2010, (projected onto an aluminium garage door) flickers and sways on the textured reflective surface. “I’m inspired by Nick Roeg2 – he uses different techniques to disrupt the viewer – I want to evoke a suggestive incoherence, like reading two books at the same time, one page from one and then the next page from another, as though two people are reading the same book but interpreting it differently.” 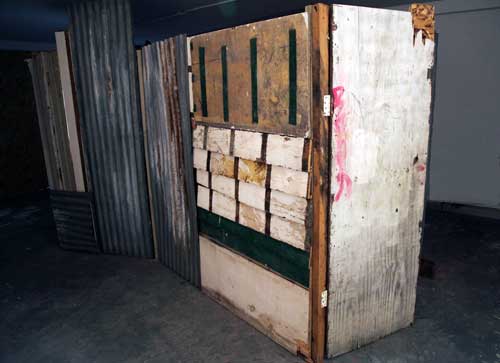 Giorgio Bruni also likes to pose questions to the audience. In his wall pieces constructed from found objects Bruni juxtaposes the crisp and the weathered:
“I like going out and scavenging for distressed surfaces – even my walking is my art (Le Derive3) – to recreate the way the walls work in London, the layering, the weathering, the memory in those walls.” Bruni’s And What? (2010), a large construction of found wood and corrugated iron, might be a shanty home or an entry into a mine, “I wanted to make something like a passage that gives the audience a sense of walking through from one place to another … it can (will be) made again in different locations”. Inside, a number of monitors built into the construction hiss and flash – “I want to give the idea of electricness of a constant hum – the images (on the monitors) are not meant to be fixed – they pose questions”. 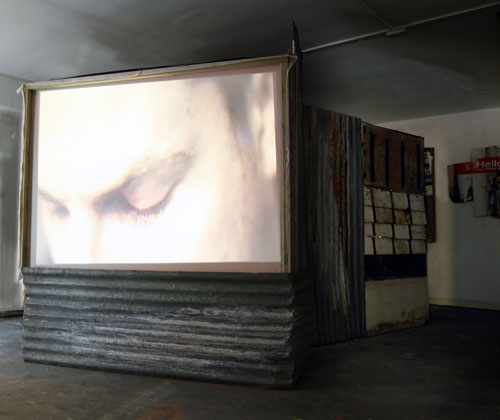 Bruni and Ross-Southall explain that they want to break down barriers between subject, viewer and artist, to explore ways of involving the viewer in the exhibition process itself.

Inspired by Antonin Artaud’s Theatre of Cruelty4 John Cage and his collaborators had a similar desire to break down barriers, when they performed their first Happening in the dining hall of Black Mountain College.5 Although that Happening took place over 60 years ago, the value of creative communities whether Art Factories or Colleges where creativity is nurtured and collaboration facilitated, is particularly relevant in our current climate of drastic cuts to art funding. While today’s art colleges design hot desk studios, disallowing students any sense of workspace continuity, and consequently no opportunity to cross fertilise ideas, supportive creative communities are more vital than ever for the development of innovative works. 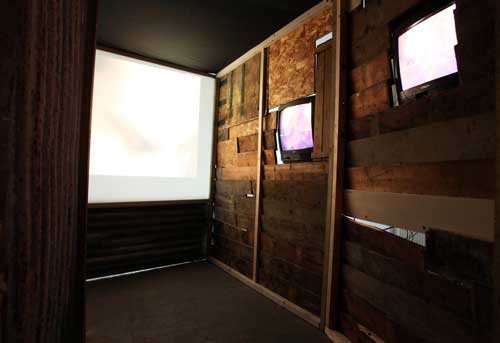 #205, Camden’s Art Factory, initiated by playwright Polly Stenham and curator Victoria Williams together with Toby Ross-Southall and Giorgio Bruni, already facilitates photo and film shoots, provides workspace for artists and writers, and will soon have more studios for local and visiting artists. Furthermore, refurbishment is underway and by early 2011 there will be a new gallery in #205: The Cob Gallery launches with its first show in spring 2011.6 NW1 must be delighted to have such an exciting creative hub in their midst, and for the broader London art community, the launch of Camden’s #205 Art Factory and The Cob Gallery is certainly cause for celebration.

1. Since developing Camden Lock into a market space the founder of Urban Space Management, Eric Reynolds, has applied his reinvigorating touch to the following London spaces – Gabriel’s Wharf, Spitalfields, and Greenwich. Urban Space Management is currently based at Trinity Buoy Wharf, where craftspeople and artists are offered spaces to make and sell their work.

2. ‘… cinematic visionary Nick Roeg’s films are marked by aesthetics of alienation, experimental editing, … [and] the use of fluid and frequent flashbacks (and forwards). As with other experimental directors, these works also juxtapose differing film styles … in a jagged and disorientating manner. Xavier Mendik for Kamera.co.uk

3. Guy Debord. The Theory of the Derive. http://www.bopsecrets.org/SI/2.derive.htm

4. Antonin Artaud, The Theatre of Cruelty, in The Theory of the Modern Stage (ed. Eric Bentley), Penguin, 1968, p.66
http://home.aubg.bg/faculty/Ndelchev/Artaud.ppt

6. Playwright Polly Stenham (celebrated for her play That Face which won the Critics circle award and the Evening Standard’s 2007 Charles Wintour award) has named the new #205gallery space after her father the businessman Anthony “Cob” Stenham – devoting this enterprise to his memory. Guardian Obit November 2006, extract ‘… Cob Stenham … highly successful businessman … had an unconventional and idiosyncratic approach to life and work which led to a mass of interests, activities and friendships. Throughout his career he was an inspiration to young people working under him… his two daughters, Polly and Daisy, lived with him, and he was a loving and attentive father. … he gave them a preparation for the future that few children could hope for, by his example of tenacity, courage and industry, by his love of books, art and the theatre, and by his love for them’ http://www.guardian.co.uk/news/2006/nov/06/guardianobituaries.business