Kortei subverts traditional practices, using alternative materials and approaches to the construction and framing of paintings in her broader comment on the fight for racial equality in the art world and beyond 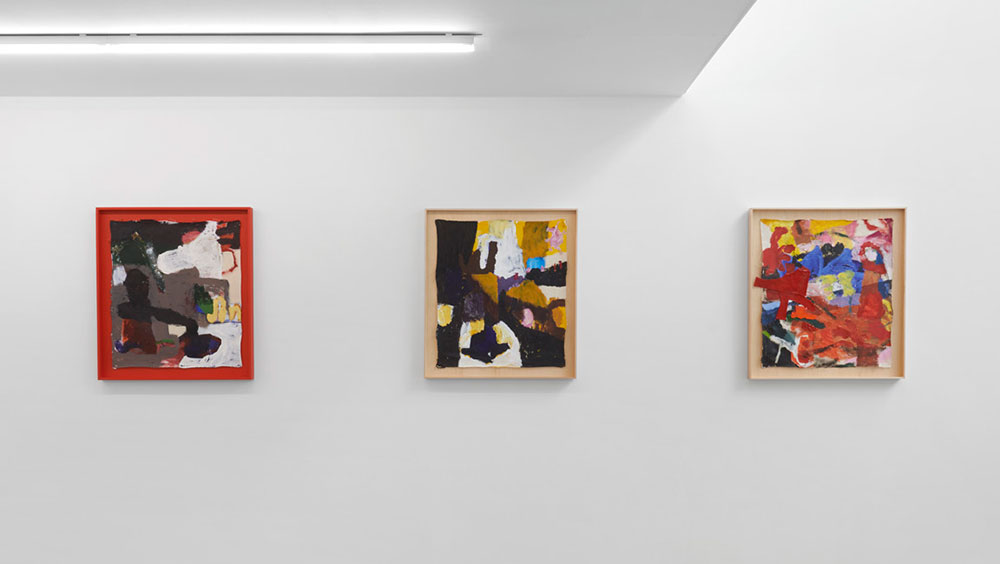 In Hilda Kortei’s debut solo exhibition at the Cob Gallery, an array of bold, abstract paintings in multicoloured frames line the two rooms. Using acrylic and spray paint on unstretched calico, with the occasional use of other fabrics such as felt, elastic bands and ribbons, as well as glitter and paper, she makes a powerful statement about what it means to create art in a space that has been overwhelmingly white and patriarchal for so long.

Like artists such as the American painter Walter Price (whose striking figurative and abstract work is currently on show at Camden Art Centre), Maya Balcioglu (whose exhibition of fabric works recently opened at Lungley Gallery) and Anya Painstil (whose works explore black identity and heritage through large textile works), Kortei subverts traditional practices, pushing the boundaries of how paintings are constructed and presented, and the influences that form those decisions.

Moreover, her fascination with the concept of “finality” and the assumed importance and value of reaching a destination of completion and perfection –and her ultimate deconstruction of this in favour of incompleteness and even a sense of chaos – give the body of work a real boldness and energy that announces an exciting new artist. In refusing to conform to established ideas of “completeness”, Kortei implicitly comments on the lack of closure and finality in the struggle for black freedom and equality, expressing in these powerful, loaded terms the unravelling, frustrating lack of progress that inevitably accompanies any engagement with, and lived experience of, racial inequality.

Born in south-east London in 1994, Kortei draws on myriad sources for her inspiration, from Roy DeCarava’s Harlem photographs to the literature of Christina Sharpe and Toni Morrison. She also considers the American artist David Hammons to be a crucial influence: in his sculptures, in which found objects, video and performance are drawn together to produce a rebellious series of works, he seeks to disrupt the artworld’s racial bias and constraining aesthetic codes. In this tradition, Kortei imbues her own practice with a subversive spirit, letting ribbons hang from roughly cut calico, and presenting an aesthetic vision of entanglement and chaos. In this show, the artist’s love of jazz and ska music is also evident: she finds freedom and joy in an intuitive, emotional and energetic “performance” of painting, and her works suggest a continued making and remaking; the artistic project is never finished.

Nevertheless, the message, while part of a continued movement, remains clear and powerful. Colour, of course, is political, and like Price, whose recent paintings explore “whiteness” so fascinatingly and movingly, Kortei is concerned with the use of black paint in her work and its charged implications. “Black is a versatile colour,” she says. “Sometimes there’s an innocence there for me, a warming feeling I get when I use black. It’s comforting. Other times, it’s disruptive. Unmoved. I enjoy letting the colour speak for itself, however gentle or thunderous it wants to be. A painting is never complete without it.”

Kortei’s use of black in these particular works points to an exploration of the concept of “blackness” and black identity in a political sense – from how it is entwined with other colours, and the emotions and memories evoked when it is combined, for instance, with red and pink, to how it can symbolise an abyss that is reminiscent of socially, culturally constructed fears. Concurrently, it also represents the source of creation and beginnings, as well as mystery and unfathomableness. Blackness is, in Kortei’s work, a space to retreat into and a place of reflection; these aspects of the work counter and complement the other meanings and connotations of “blackness”, whether fearful, political, or – as Kortei ultimately implies – a complex, constantly shifting entanglement of them all, which defies finite representation.