In this solo exhibition, Tahnee Lonsdale presents 12 large oil paintings, produced this year, that provide a meditative and emotive space in which to consider embodiment, togetherness and loss

At first glance, Tahnee Londsale’s figures, emerging and overlapping throughout these large, square canvases, seem to hide from view, yet their presence, their heavy emotional lives and social interactions, are mesmerising. They possess a hypnotic quality and I find myself drawn into the depictions of entangled limbs. Seeming fluid and layered as pools of water, each painting encourages a dwelling – in the deep shades themselves, and the complex puzzle of mannerisms, poses and coalescence that they both reveal and hide from view. 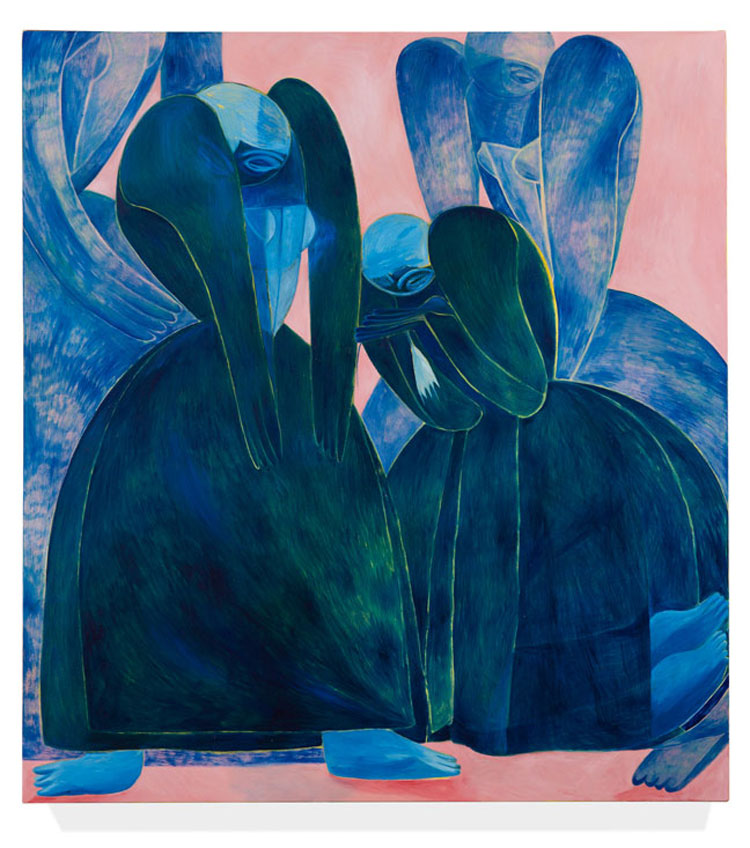 In I Love You No Matter What, for instance, three (or perhaps four) blue figures overlap to create one weeping whole – at least, that is my first impression. With a small bunch of flowers, and the melancholy of the blue, it would seem that this is some sort of mourning scene. And yet, what could be a tissue held by the central figure could also be a baby. Are they mourning or nurturing? Are they swimming between these places in the life cycle? There is a spiritual dynamic to the three central figures, too; they resemble the holy trinity, in a way, but also the figures beneath the crucifixion; either way, there is a transcendental aura, or echo, in this composition, though it is stylised and simplified in a refreshing palette, and with lines that recall Matisse and Picasso, rather than more overt art historical or religious iconography.

In the same room, two other paintings complement this painting in their palette and style – Ancestors and Family Dynamics. The first seems to show the elaborate shapes of medieval gowns, with billowing sleeves and skirts, although painted with such a degree of abstraction that any specific time is never certain. These bodies are also seemingly headless, or faceless, so they emerge as ghosts or shadows, blending into one another to create an intimidating group of arched, overlapping figures. In Family Dynamics, similar figures seem to drag one another down into a chaotic mass of limbs, or shadows, collapsing into one another. My six-year-old said they reminded him of the game Twister, while, for me, there is a sense of being drawn downwards, into a sort of Underworld; these figures become a river, or pool, in their uncanny fluidity.

In the Cob Gallery’s larger room, the paintings are less melancholic, but retain this mesmerising style and complex emotional space and experimentation. Here, too, the careful layering of blocks of colour, using a minimal palette, resembles the techniques of screen printing to a degree, creating depths of colour that encourage a reflective, meditative interaction. 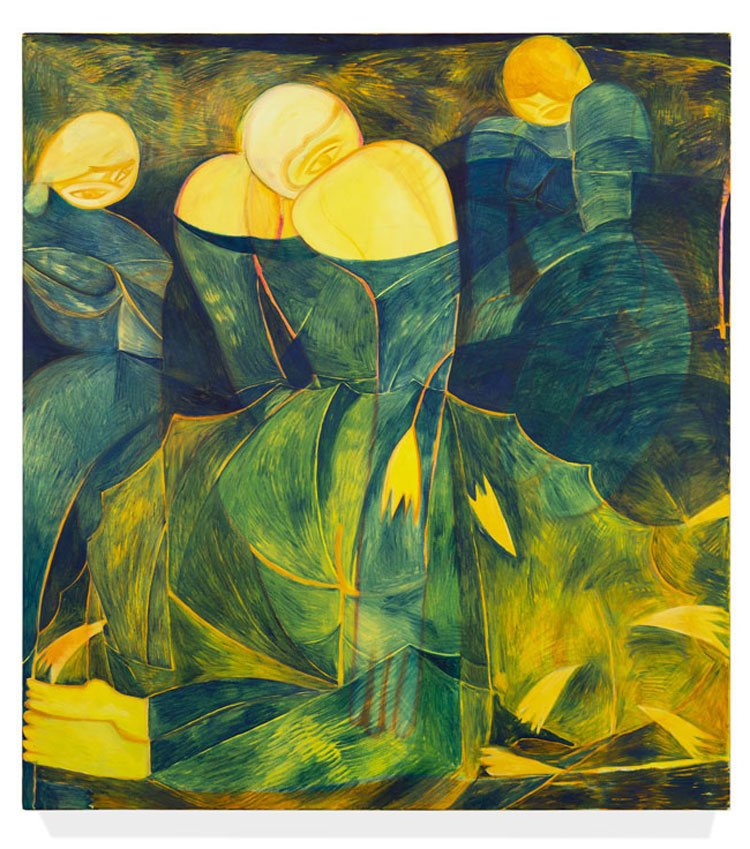 In Under The Shell, from which the exhibition takes its title, Lonsdale recalls Botticelli’s Birth of Venus (1486) – in particular, the feminine shapes and style. The muted greens and pale yellows of Botticelli’s painting are also referenced, though in deeper, more vivid shades. Nevertheless, his painting echoes through this piece, creating a fantastical and dream-like space. Subtly, Lonsdale reveals the ways in which our own imaginations and reference points are conditioned by this historical inter-visuality; we recall images, symbols and icons from the past, often without realising. 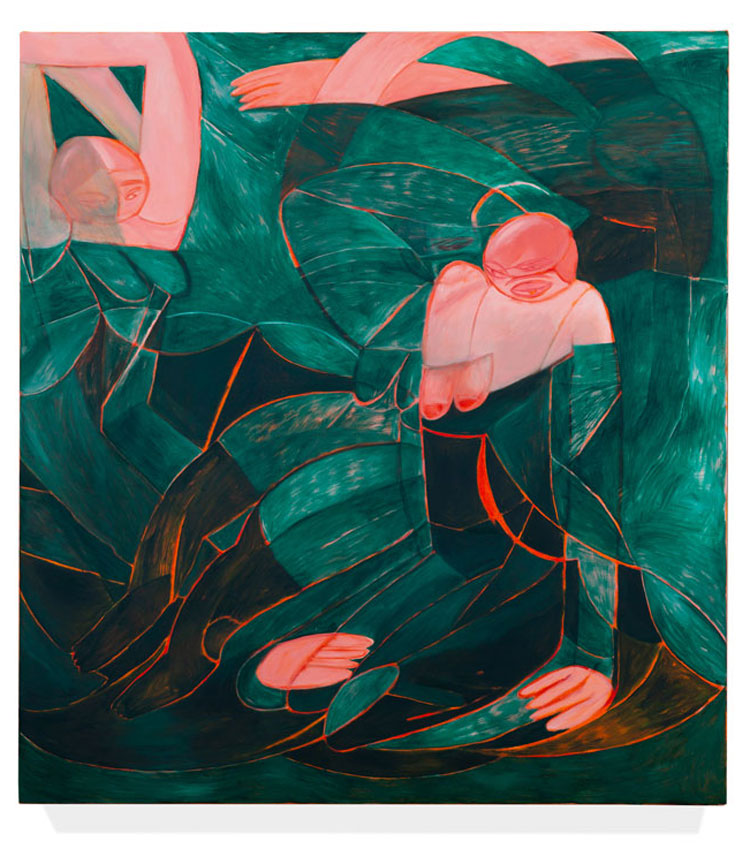 In Bath My Weary Limbs, in which a figure is partially entwined and concealed by palm-like shapes, in a peach pink and almost dark turquoise blue, there is again a sense of falling, and landing – and yet, it is a soft landing. The feeling of weariness, and languishing, is pertinent, but any anxiousness and darkness is offset by nurturing colours and shapes; it is as if the painting holds the figure, or the feeling, and relieves it of its interior tension. Here, as in the other paintings, there is a sense of healing and imminent resurrection after a fall or a break; the figures drown, but they are nurtured on the seabed. There is a softness to the melancholy, and hope within the mourning and drowning implicit in these scenes. 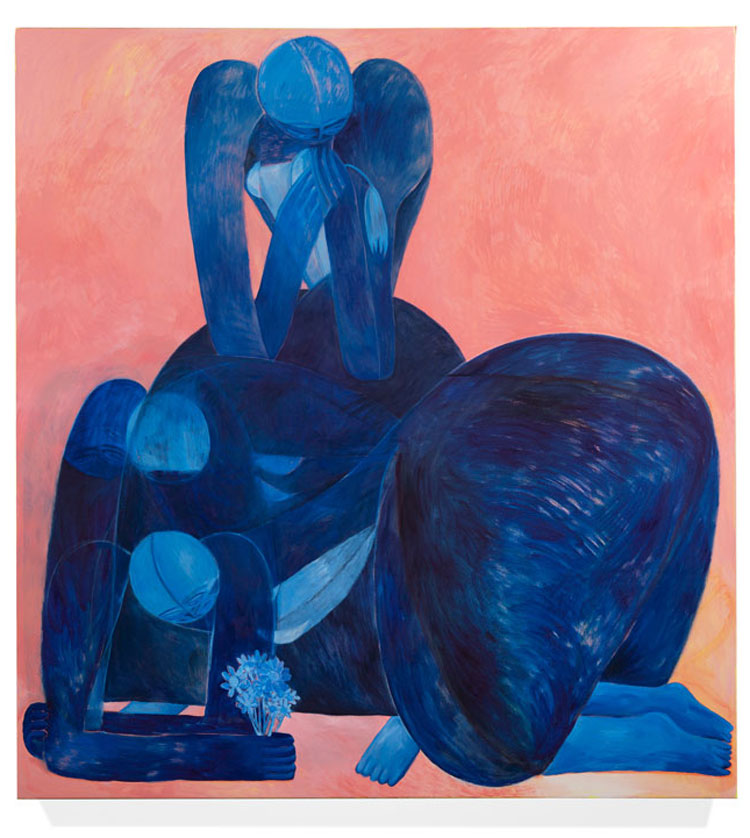 The idea of coalescence and communality is particularly striking, throughout this body of work. In each painting, limbs are entwined, and they at once pull one another down and rescue or console one another. This speaks poignantly to the current time, in which we become aware of the commonality of a strange, isolated and yet social trauma, as we attempt to move out of it. Mourning and yet moving, accepting shared pasts and visual languages, and yet speaking to otherwise abstract and ambiguous emotions, Lonsdale’s paintings capture what it is to attempt to recover, and to realise the commonality necessary to that moving on. Even as these figures drown and collapse, they are reborn, these souls nurtured on the seabed. 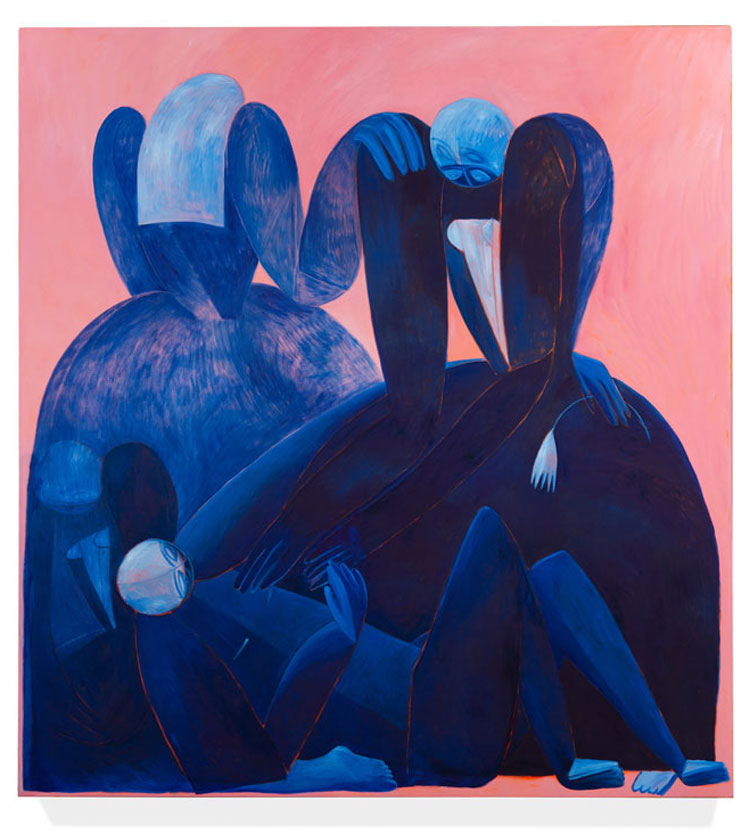 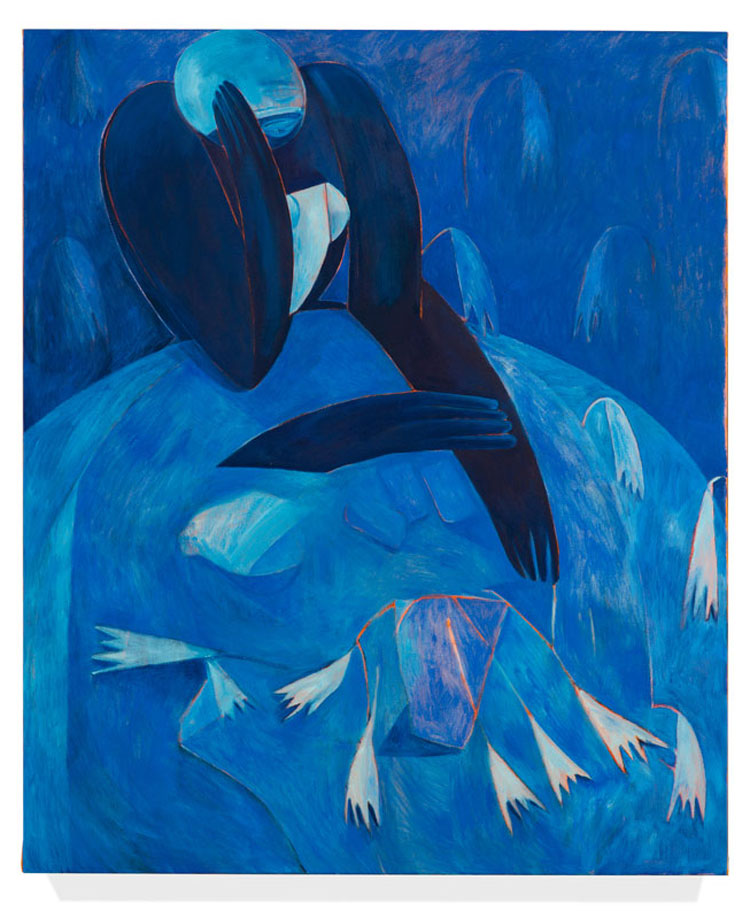 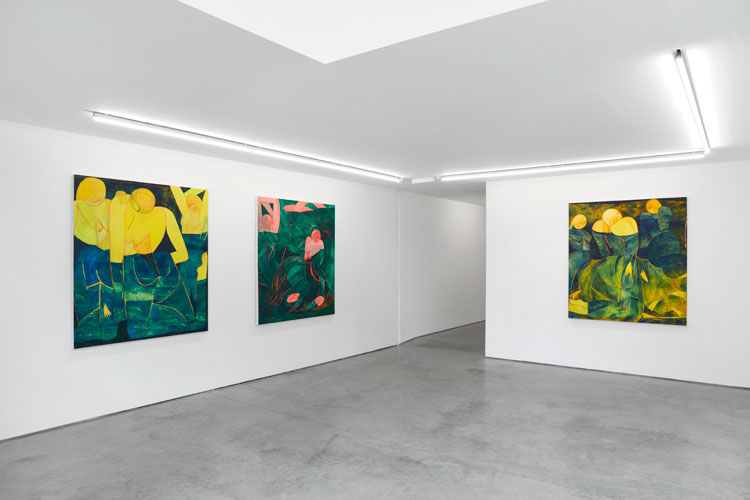