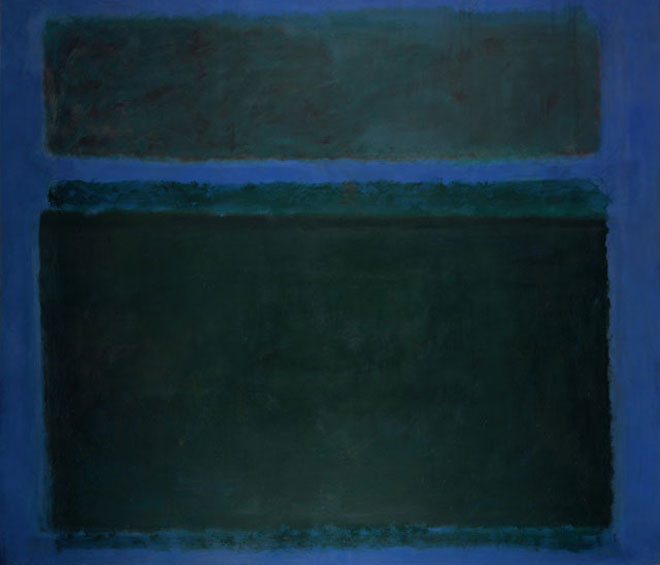 Although the protagonists of abstract expressionism were known as “the irascibles” and became famous for drinking and bar-room brawling, there were scholars in their ranks. And while New York became the city most associated with the group, its artists came from as far away as the American west coast and Europe. Janet Sobel (who had a not insignificant influence on Jackson Pollock) started her life in Ukraine, Mark Rothko, born in Latvia, escaped the antisemitism of tsarist Russia as a child; Arshile Gorky fled tragic beginnings in Armenia (and ultimately met a tragic end in Connecticut) and Willem de Kooning reached America as a stowaway from the Netherlands.

The first room of this exhibition acknowledges these diverse beginnings with some surprising early works. Rothko’s Self Portrait (1936), with bright red lips, tinted blue glasses and his strange barrel-shaped torso wrapped in a brown jacket, makes him look, quite frankly, creepy. This muddy image is a world away from his later meditative fields of trembling colours. The surrealists and cubists haunt these formative and often clumsy canvases, as Rothko wrestles with Max Ernst, and Jackson Pollock wrestles with his own cubist experiments.

Pollock has a huge hall dedicated solely to his work, a kind of solo show within the larger exhibition. And it contains some of his most important works. Mural (1943), commissioned by the legendary collector Peggy Guggenheim to cover an entire wall of her Manhattan townhouse, is an enormous canvas of restive curls that jostle in a tangle of colour. It is a composition that could not speak more eloquently of movement and energy. This room also houses a vast canvas by Lee Krasner, but she gets little more than a cursory mention in the wall text – a footnote in Pollock’s tragic story. Cast as wife and protector of his legacy, rather than an artist in her own right, her canvas is positioned solely as a tribute to her husband.

Rooms dedicated to individuals (Clyfford Still, Willem de Kooning and Rothko also have their own space) are rather arbitrarily strung together with themed sections, making this a disjointed experience. But while this exhibition does not flow seamlessly through the complex world of the abstract expressionists, there are some parts that pack an emotional punch. A room entitled “Darkness Visible” starts to get under the skin of what drove many of them. Here, Robert Motherwell’s In Plato’s Cave No 1 (1972) stands apart as something very modern, transcending the often brash, almost animalistic work of some of his contemporaries. Strangely textured, watery washes of black acrylic give the impression of an alien landscape, like the surface of a distant planet photographed from an orbiting space probe. It is intriguing and elusive, a fitting partner to Rothko’s Untitled (Black on Gray) (1969-70).

The room also houses Motherwell’s enormous Elegy to the Spanish Republic No 126 (1965-75), one of a series of almost 200 paintings inspired by the tragedies of the Spanish civil war. On a background of creams and whites, three squashed spheres are imprisoned within solid black bars. It has the monumentality of a prehistoric megalith, equally as timeless and indecipherable.

The last room acts as a counterpoint to the fascinatingly melancholic atmosphere of the darker works of the abstract expressionists. Here are their pastorals, their sunny gardens – the lighter side of a group marred by tragedy and loss. Happily, Joan Mitchell’s Salut Tom (1979) bids us au revoir as we leave, a quadriptych of yellows and greens; an unapologetically joyous impasto landscape. One of only two of her paintings on display, it draws on Monet’s water lilies and speaks of summer much more convincingly than Pollock’s Summertime (1948), exhibited earlier in the exhibition.

It is worth mentioning that the contributions of women, such as Sobel, Krasner and Mitchell, are touched on only briefly, and certainly none is given a room of their own. And this exhibition as a whole feels a little clunky. Trying to tie together the varied concepts and techniques, not to mention personalities, of these complex individuals is no easy task. It seems that the curators have hedged their bets with a mixture of elegiac and tentatively themed rooms. It’s a shame that they weren’t a little braver. 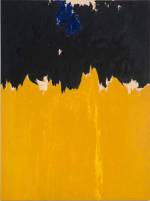 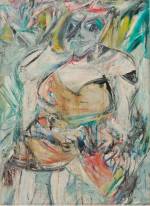