From the archive: A New Illustrator – Aubrey Beardsley

From the archive: A New Illustrator – Aubrey Beardsley 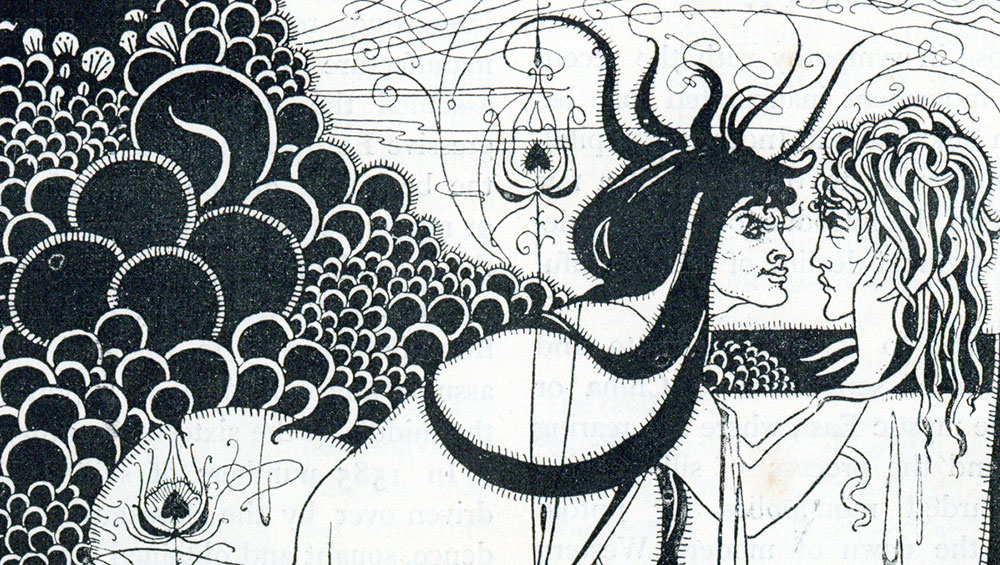 From a drawing in illustration of Mr. Oscar Wilde's ‘Salome’ by Aubrey Beardsley (detail). In A New Illustrator: Aubrey Beardsley, The Studio, An Illustrated Magazine of Fine and Applied Art, Vol 1, No 1, April 1893, page 19. © Studio International Foundation.

I have lately seen a few drawings which seem to me to be very remarkable. The very limited number which the artist is said to have produced makes their perfection of execution all the more remarkable. I am quite well aware that the mere fact of publicly admitting one’s interest in the work of a new man, whose first design may be a delight to artists, is not considered to be good form in criticism.

But why should one care about good or bad form – or criticism either, for that matter? For the criticism of art to-day is merely the individual expression of persons who mostly know nothing about their subject. Though artists may be struck with a man’s earliest work, and though the creator of it may, and frequently does, never produce anything better, one usually waits until he is dead, or discouraged, before any visible sign of appreciation is granted him. Thus is the intelligent critic spared from making a spectacle of himself. 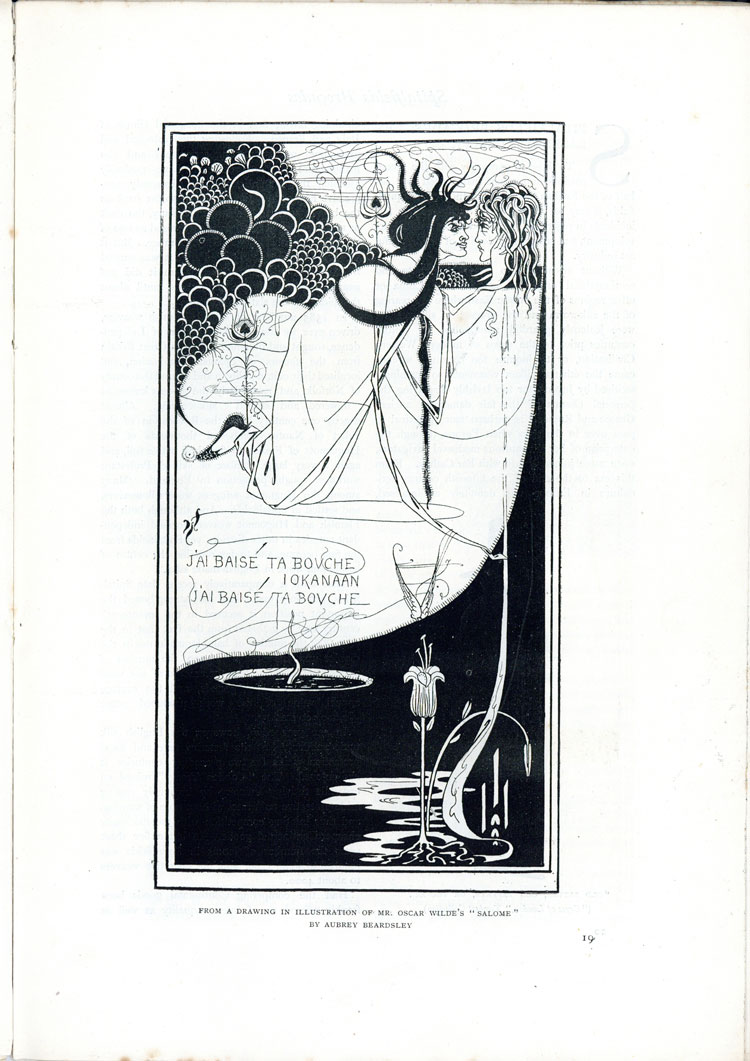 A New Illustrator: Aubrey Beardsley, The Studio, An Illustrated Magazine of Fine and Applied Art, Vol 1, No 1, April 1893, page 19. Image: From a drawing in illustration of Mr. Oscar Wilde's ‘Salome’ by Aubrey Beardsley. © Studio International Foundation.

But whether Mr Beardsley’s work is appreciated or despised – and my only fear is that he will suffer from over-appreciation and enthusiasm – the drawings here printed show decisively the presence among us of an artist, of an artist whose work is quite as remarkable in its execution as in its invention: a very rare combination. It is most interesting to note, too, that though Mr Beardsley has drawn his motives from every age, and founded his styles – for it is quite impossible to say what his style may be – on all schools, he has not been carried back into the fifteenth century, or succumbed to the limitations of Japan; he has recognised that he is living in the last decade of the nineteenth century, and he has availed himself of mechanical reproduction for the publication of his drawings, which the Japs and the Germans would have accepted with delight had they but known of it. 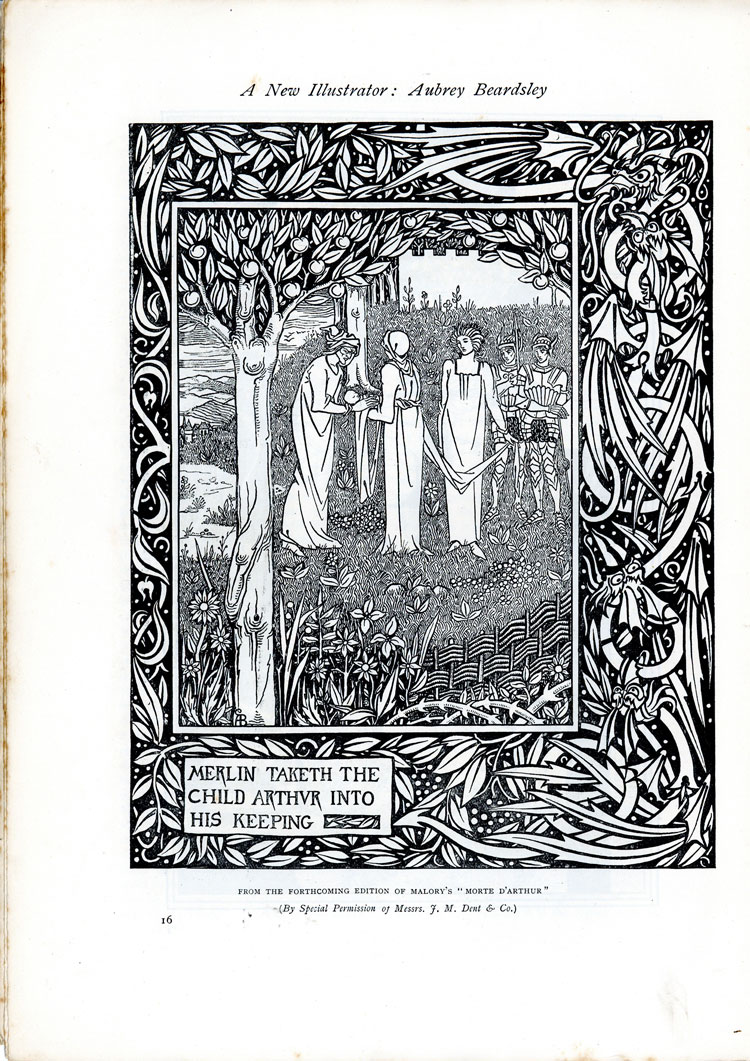 The reproduction of the "Morte d’Arthur" drawing, printed in this number, is one of the most marvellous pieces of mechanical engraving, if not the most marvellous, that I have ever seen, simply for this reason: it gives Mr Beardsley's actual handiwork, and not the interpretation of it by someone else. I know it is the correct thing to rave over the velvety, fatty quality of the wood-engraved line, a quality which can be obtained from any process-block by careful printing, and which is not due to the artist at all. But here I find the distinct quality of a pen line, and of Mr Beardsley's pen line, which has been used by the artist and reproduced by the process-man in a truly extraordinary manner. The decorative borders also are very charming. Mr Beardsley has recognised and shown by his work that decoration means, not the production of three or four fine stock designs, and the printing of these in books, to which they have no earthly relation, on a hand-press ; but that decoration should be the individual and separate production of designs which really illustrate or decorate the page for which they were made, and that the artistic value of such designs is not lessened by the fact that they are quite as well, if not better, printed by steam than they have ever been by hand.

Although in all of Mr Beardsley’s drawings which I have so far seen there are signs of other men’s influence, I know no reason why this influence should not be apparent if the inventor of what we may consider the type is a worthy man to imitate. However, to say that Burne Jones, or even his far greater master Rossetti, invented what is vulgarly known as the Rossetti type, is absurd. They did not invent it: they have only recorded a type which is very common in this country, emphasising certain characteristics which no one had ever so emphasised before. Mr. Beardsley, in illustrating the " Morte d’Arthur," wished an appropriate type; he has taken the one which appealed to him most, and he was perfectly justified in doing so. But it seems to me that he has drawn such special attention to it that this detracts from the otherwise great merit of his designs. However, in a series of portraits which I have seen, and in designs which he himself calls Japanesques, this type scarcely occurs at all. It is far more amusing to dwell upon one’s pleasure in a man's work than upon what may seem its weaknesses, and though he has allowed recently a number of drawings to be printed elsewhere which are not worthy to be signed by him, some of the little headpieces, notably one of men in armour, seem to me, in execution as well as design, quite equal to the best fifteenth-century work. Then, too, his little landscapes are altogether delightful: though they are conventional in the right sense, they are not imitations. But most interesting of all is his use of the single line, with which he weaves his drawings into an harmonious whole, joining extremes and reconciling what might be oppositions – leading, but not forcing, you properly to regard the concentration of his motive. In his blacks, too, he has obtained a singularly interesting quality, and always disposes them so as to make a very perfect arabesque. Certainly, with the comparatively small amount of work which Mr Beardsley has produced, he has managed to appeal to artists – and what more could he wish?

The illustrations from Mr. Beardsley’s work in this number are: Salome, from the original belonging to the artist; La Cigale, Les Revenants de Musique, the property of THE STUDIO; Siegfried, from the original drawing belonging to Mr. Edward Burne Jones; the frieze on page 10, from a pen-and-ink design, kindly lent by Mr. Robert Ross; and four blocks from Messrs. J. M. Dent & Co.’s new illustrated edition of Malory’s " Morte d’Arthur," to be published in half-crown monthly parts, beginning in June next. 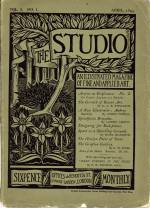 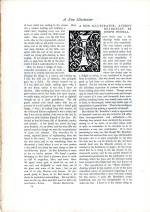 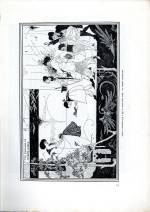 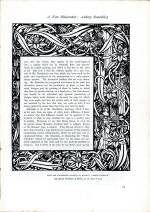 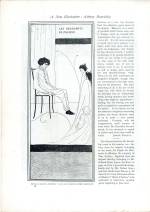