Beyond Ophelia: A Celebration of Lizzie Siddal, Artist and Poet

Beyond Ophelia: A Celebration of Lizzie Siddal, Artist and Poet

Best known as Millais’ Ophelia, Lizzie Siddal was a Pre-Raphaelite artist and poet in her own right. She died young, with no particularly established reputation, and this small exhibition is only the second entirely in her honour 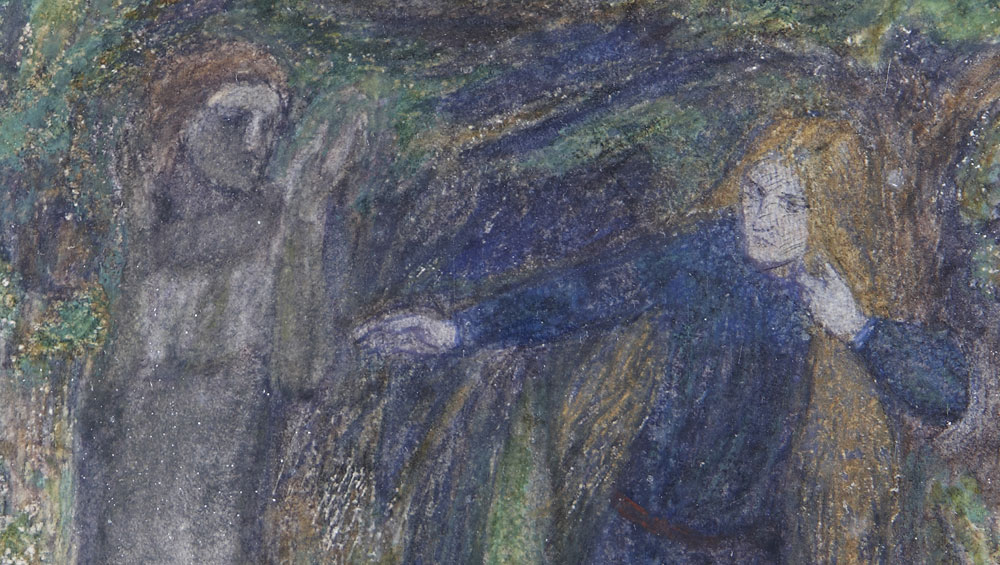 She was described by William Rossetti as “a most beautiful creature with an air between dignity and sweetness with something that exceeded modest self-respect and partook of disdainful reserve,”1 and is best known as John Everett Millais’ Ophelia (1852) – the girl who caught pneumonia by lying in a cold bath for hours while he painted – and her widower Dante Gabriel Rossetti’s posthumous Beata Beatrix (1863). Lizzie Siddal (1829-62), born Siddall, but persuaded by Rossetti to drop an L for reasons of style and association, was well aware of the conundrum of her situation, valued, as a woman, for her appearance and as a muse for the male artists of the Pre-Raphaelite Brotherhood, while striving to be loved for her character and her own naive artistic abilities. Her incomplete poem, The Lust of the Eyes, begins with the following perceptive lines summing up how it must have felt to be “used” in this way, rather than “nurtured” as a whole woman – and the wife she long waited to become: “I care not for my Lady’s soul / Though I worship before her smile; / I care not where be my Lady’s goal / When her beauty shall lose its wile.”

Siddal was not entirely overlooked as an artist, however, and did enjoy some success in her own right, aided in part by her mentor and husband-to-be, Rossetti; championed by the art critic John Ruskin (who told her she had “genius”2 and gave her a stipend of £150 a year); and by Ford Madox Brown, who, in 1854, wrote that she was “a real artist, a woman without parallel for many a long year”.3

Popular legend has it that Siddal was “discovered” by Walter Deverell, an early associate of the Pre-Raphaelite Brotherhood, in a milliner’s shop and that, quite taken with her copper hair, he asked her to model for him. Some dispute this, claiming that Siddal, while working as a dressmaker, independently approached Deverell’s father, the principal of the Government School of Design (now the Royal College of Art), with some of her sketches. Either way, it was through Walter that Siddal was introduced to the Pre-Raphaelites, for whom she went on to work as a paid model, sitting first for him, then Millais, then Rossetti. She soon became Rossetti’s pupil and lover, and they shared a difficult and tempestuous relationship, both of a temperament that today would most likely be diagnosed as bipolar. Rossetti was commitment-phobic and repeatedly postponed marrying Siddal. She, in return, used her recurrent illness and overall fragile state – described then as consumption, latterly as anorexia nervosa, but most likely largely the effects of a worsening addiction to laudanum – to gain his attention and summon him to her when she wanted. They finally married on 23 May 1860, just two years before she died of an overdose, not long after suffering a stillbirth.

In the catalogue accompanying a 1947 Pre-Raphaelite exhibition in Birmingham, Siddal is cited as one cause of the dissolution of the Brotherhood. Simultaneously, however, three of her drawings and a self-portrait were included in the show. The following year, six watercolours were exhibited at the Whitechapel Gallery. In the 1984 Tate Pre-Raphaelite exhibition, Siddal was the only female artist out of 30, and, out of 250 works, two and a half were by her – the “half” being a watercolour of Sir Galahad and the Holy Grail, inscribed as being designed by “EES” and executed by “EES & DGR”. There has only ever been one solo exhibition of her work, however, curated by Jan Marsh at the Ruskin Gallery, Sheffield, in 1991. This included 34 works, 14 photographs of unlocated works, a photographic portfolio of her sketches (one of a number compiled by Rossetti after her death), a Gothick-style jewel box which she had helped to decorate, her copy of the Scottish ballads, which inspired four of her drawings, and a small group of poems, loaned from the Ashmolean Museum, Oxford. This current exhibition at Wightwick Manor does not, therefore, have great precedence.

In 1961, the art historian and soon-to-be biographer of Rossetti, Lady Rosalie Mander, bought a bundle of Siddal’s drawings at auction. She later went on to acquire two gouaches. Wightwick, the erstwhile home of Lady and Sir Geoffrey Manders, now belonging to the National Trust,  accordingly has the second largest public collection of Siddal’s works of art. Beyond Ophelia displays these all together in the Daisy Room, some framed for the first time, alongside poetry and a short introductory film narrated by Marsh. The curator, Hannah Squire, also seeks to channel the spirit of Lady Mander’s husband Geoffrey, who liked to display quotes from favourite writers on the walls of the manor (these can still be enjoyed in other rooms), by adding similar inscriptions pertinent to – and, indeed, by – Siddal. 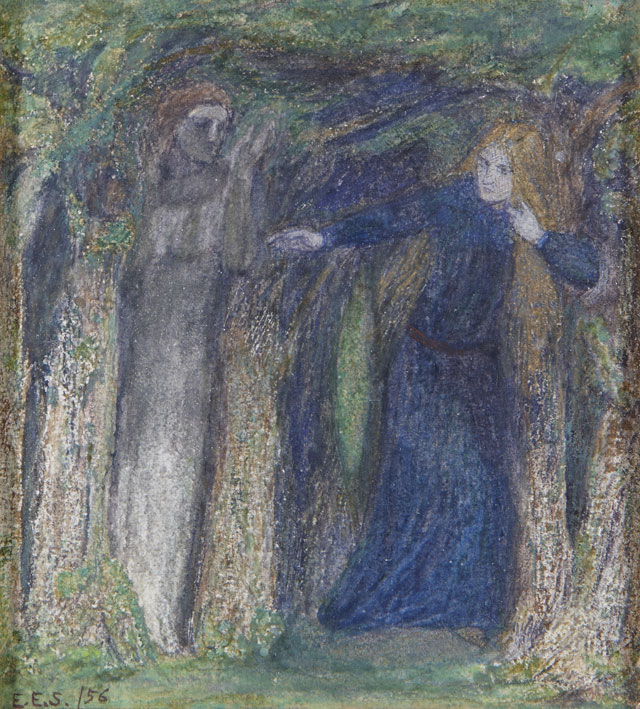 The two gouaches are miniature gems, neither larger than A5, but each capable of casting an enchanting spell. Despite her stipend, Siddal was greatly limited by the cost of materials and the (un-)likelihood of selling her work. The Haunted Wood (1856) is an example of what critic Tom Lubbock once described as Siddal’s “terrifying Blake-like images”, with a long-haired maiden simultaneously reaching for and recoiling from a shadowy figure among the tree trunks. The painting is thought to have inspired Rossetti’s later watercolour and drawing How They Met Themselves (1864), and, when it was shown at an exhibition, organised by Madox Brown, feedback was positive. Rossetti’s brother William described it in the Spectator as: “Quite unlike anything which the manner of lady artists have accustomed us to.”

The second gouache, St Agnes’ Eve (c1850), is, like many of Siddal’s works, based on a poem by Alfred, Lord Tennyson. This one tells the tale of a nun who devoted her life to Christ, here seen kneeling, gazing out of a window at the distant clouds. Three drawings of St Cecilia (begun in 1855) have a similar subject – the patron saint of music and a symbol of steadfast virtue and heroism, who, despite having taken a vow of chastity, was forced to marry a pagan, but went on to successfully convert both him and his brother to Christianity. The sketches were made as illustrations for Tennyson’s poem The Palace of Art, although Siddal never received an official commission. Each picture depicts St Cecilia, an angel (who will protect her), and her attribute, namely organ pipes. In all of them, St Cecilia’s head is thrown back, as if swooning, yet seeking to remain strong and dignified – another woman caught in that liminal space between passive subject and active object. 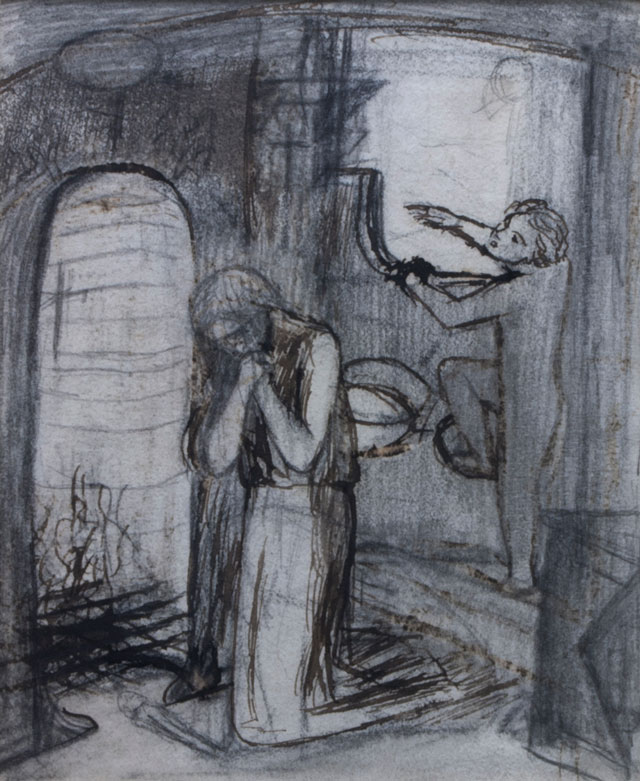 The pen and ink drawing of Sister Helen is a sympathetic rendering of a tortured subject, who, having melted a wax figure of her unfaithful lover and brought about his real-life death, falls to her knees, clutching her throat in agony at the loss of her soul. Although based on a poem by Rossetti of the same name, the story could better have been written by Siddal of Rossetti – her own unfaithful lover. Contrastingly, however, Lovers Listening to Music (c1854) has been touted as a possible portrait of Siddal and Rossetti in happier times, sitting in an embrace at Lovers’ Seat, near Hastings (which they are known to have visited that year), being serenaded.

Siddal was not ignorant of prevailing artistic thought, and her subjects reflect the standard motifs of the Victorian era: the Bible, medieval legend and poetry. There is, however, a keen female slant in her renderings, and the majority of her protagonists are women. Her three drawings of the Nativity, for example – some double-sided, once again showing her methods of economising – depict only Mary and her child, at whose side she tenderly kneels, demonstrating both devotion and submission. There has been some suggestion of “Mariolatry”, or excessive veneration of the Virgin, since the figure of the Christ child remains but an outline. To me, however, it seems far more simply a case of Siddal placing herself in the role of the subject, silently voicing her longing for a child of her own.

There is a wonderful booklet in the exhibition room, comprising information sheets and pages of Siddal’s poetry. Sadly, it is not available to buy in the shop. In her verse – which was never intended for public consumption (although William Rossetti published all 15 of her poems posthumously), Siddal’s ambivalence comes through even more clearly, and she often eulogises on the theme of an early death.

Marsh, writing of the response to the exhibition she curated in Sheffield, says: “The critical consensus was that [Siddal’s] art revealed a modest and naive, not to say inept, talent. Indeed, as the exhibition curator, I rather shared this view, given the evident ‘defects’ of draughtsmanship, such as boneless bodies, awkward anatomy and shapeless drapery.”4 She later adds: “She might almost, in today’s terms, be characterised as a naive or primitive painter.”5 It is this innocence, however, coupled with a deep insight and understanding of her situation and prospects, that makes Siddal’s work so haunting and helps it remain important to this day. In the census of 1861, Siddal’s occupation was listed, like her by-then husband’s, as “Artist: Painter”, something highly unusual at a time when married women’s occupations were rarely included. The smallness of this exhibition – just two paintings and 10 drawings, all of modest scale – emphasises the constraints on her life and output, and, most especially, how it was tragically cut short. One can only be left wondering how her style and skill might have developed, had she but lived longer.

To touch her shadow on the sunny grass,
To break her pathway through the darkened wood,
Filled all my life with trembling and tears
And silence where I stood.

I watch the shadows gather round my heart,
I live to know that she is gone
Gone gone for ever, like the tender dove
That left the Ark alone.6 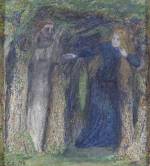