Eight key works from the past 15 years, all unapologetically seen from a woman’s perspective, circle around the fluidity of sexuality, identity and the diversity of human behaviour 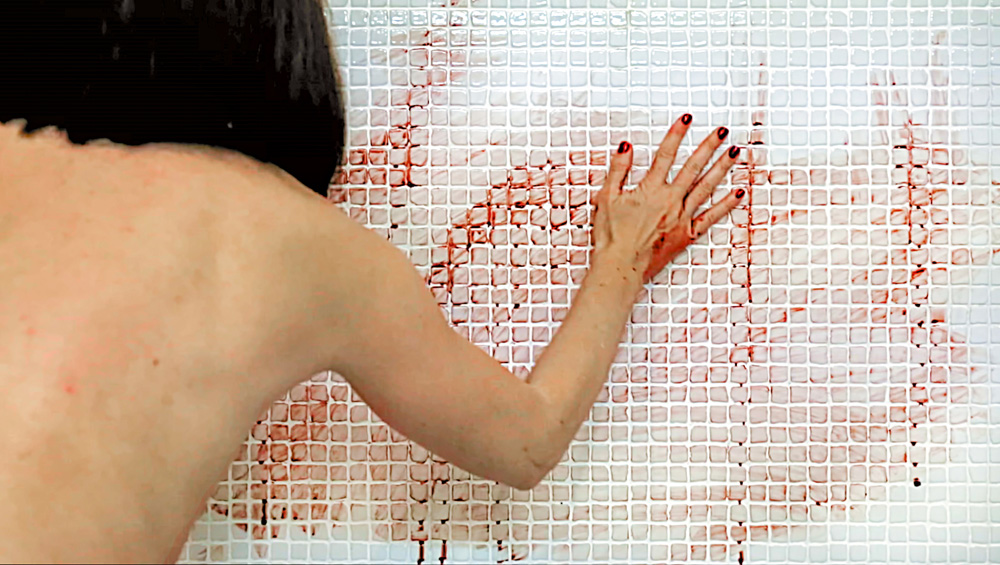 A tall, bright, three-sided column of stacked screens beckons the viewer to enter Show Me,  Yapci Ramos’s solo exhibition at the Tenerife Espacio de las Artes in Santa Cruz, Canary Islands. Ironically phallic in form, Red-Hot (2015-2018) provocatively flashes text and images of the artist in a shower, mostly unclothed, inking words on to its white tiles in her own menstrual blood, then washing it away. While the use of body fluids as a material is no longer controversial, menstrual blood still has the ability to make some people – usually men – squeamish, uneasy, even angry, among a host of conditioned reactions that might include envy. For women, it is more matter-of-fact, part of a natural cycle, although for some it can be painfully incapacitating. Be that as it may, it signifies women’s power to reproduce, underscored by the artist’s blinking haiku of encouragement: Go, Wake, Yes, True, among other words. For Ramos, it also conjures ancient rituals and religions centred on the Canaries’ aboriginal worship of the mother goddess, the Earth and the magical power of blood, with purification rites that included cleansing in the sea in preparation for birth and renewal. Sleekly, elegantly modern as it is, in its eruptive primal messaging, it nonetheless seems to connect to Tenerife’s celebrated (and active) volcano El Teide, once a sacred site. 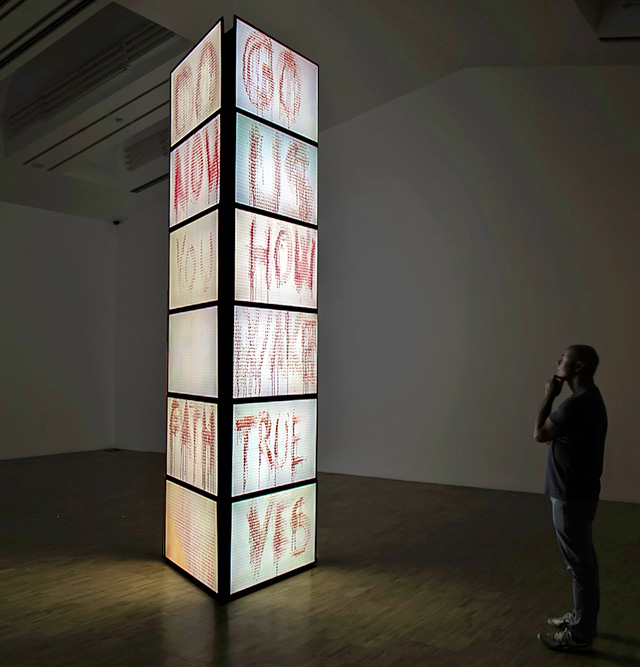 Such representations of women are often still greeted critically, viewed negatively as exhibitionism when made by women, especially if the women in question are striking in appearance, as Ramos is. (The same criticism did not consider it exhibitionistic, or exploitative, or voyeuristic or false when men represented naked women, as they have done since time immemorial.) That attitude seems to be shifting as the cultural and social climate changes, and women around the world are reclaiming the rights to their bodies and their stories.

Ramos (b1977) is a photographer and video artist with an international profile and a native of Tenerife, where her family has lived for generations. This is her first one-person exhibition in the Canaries and her most comprehensive to date, each of its eight very different installations occupying an entire gallery of the museum. Ably curated by Yolanda Peralta, the selection includes key works from the past 15 years of Ramos’s production. It is a very personal exhibition for her, she said, and a summation in some ways, as she considers what will constitute the next stage of her development.

The themes in the present exhibition have engaged her from the beginning of her career, circling around the fluidity of sexuality, identity and the range and diversity of human behaviour. It is evident that Ramos has a profound sense of empathy for outliers, for the vulnerability of lives lived at the margins of society. She addresses her subjects interrogatively, delving into their circumstances and their psychological complexities, regarding them with toughness as well as tenderness, but without judgment, acknowledging that there are no simple solutions. 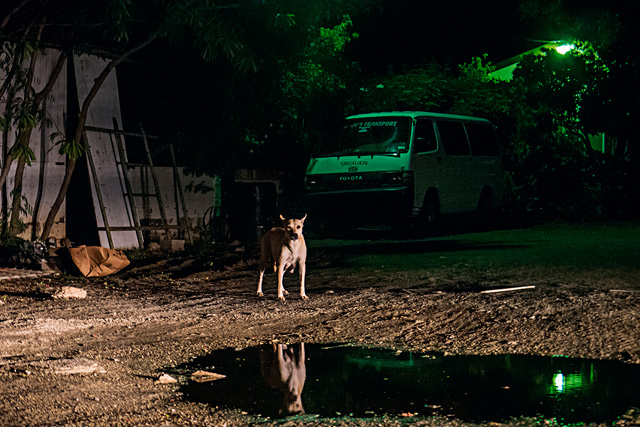 Perras (2012), a series of photographs of abandoned, battered dogs roaming a destitute neighbourhood in Aruba, are surrogates for the prostitutes who ply their trade there. Instead of the women, it is the dogs that are caught in the hard, quick light of the camera’s flash as prey, victims, discards – and perhaps as survivors. 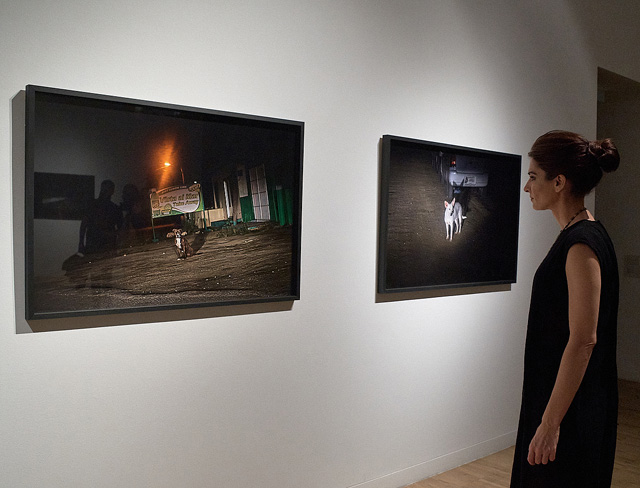 Another sequence of photographs, and equally, if more immediately disturbing, shows a very young girl who has garbed herself in the seductive clothing of someone much older, her eyes dramatically rimmed in black eyeliner. But it is the childish mouth slicked in scarlet lipstick that sets off alarms, as does the unflinching gaze. Is it innocence or precocity we see in it, that allows her to pose herself as an illicit sex object? How did she become so expert in the art of maquillage? And what might be the consequences of such early sexualisation? (The photos, unstaged, were taken 13 years ago and shown only recently). 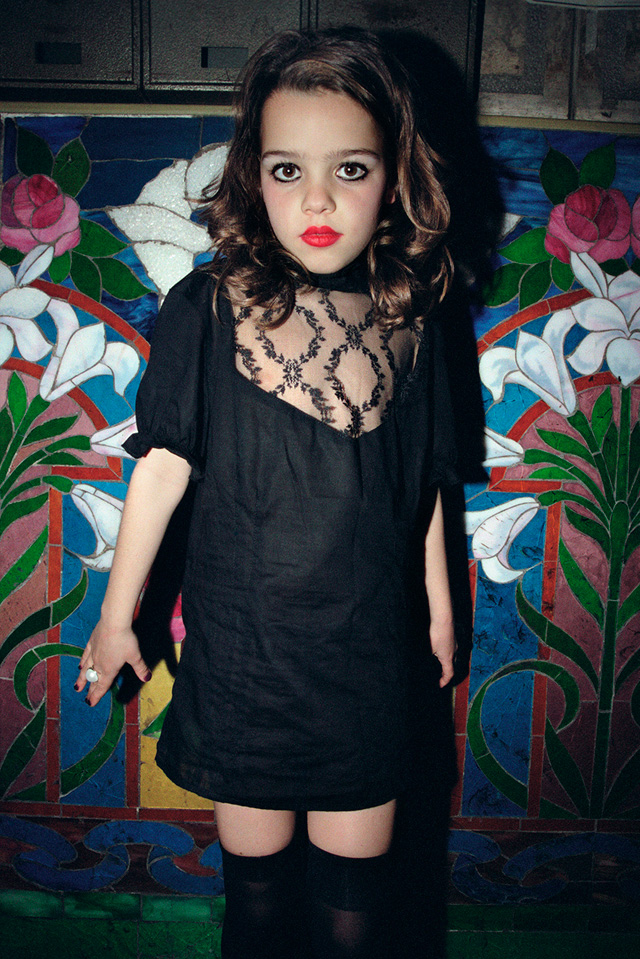 Bushes in the Night (2016-18), a beautiful, lulling video about several varieties of plants is less fraught. It seems at first to be a documentary, but, instead, it tells us about the sexual perverseness of flora, remarkably similar to that of their human counterparts – and amusing. 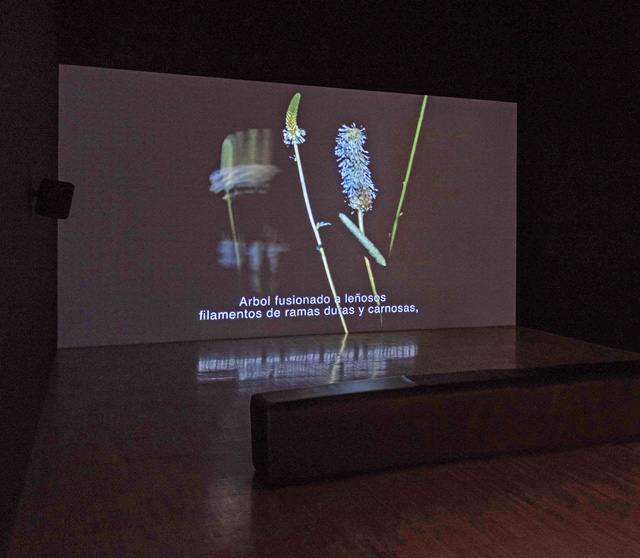 The focal point of the show, arguably, is Back &Forth (2006-18), a kind of then-and-now story, with the inevitable poignancy of younger dreams and possibilities checked by reality and constricted by the passage of time. A series of larger-than-life, full-frontal nudes flank one wall, Almodóvar-like personas as heroes. They are friends from Ramos’s time in Barcelona, taken around 10 years ago. 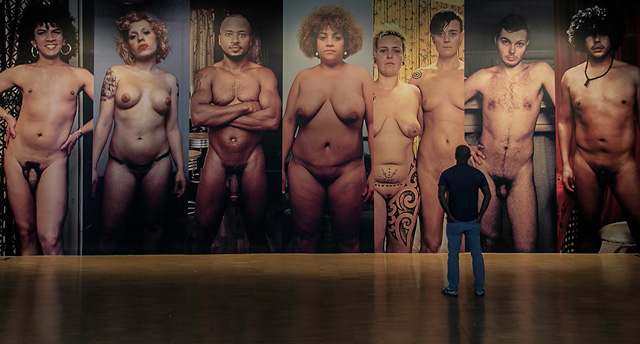 On the opposite wall, eight recently made, three-channel video interviews are projected in which each talks about their present life, some living in Barcelona, others in New York, Paris and elsewhere, comparing it with what they had hoped to accomplish for themselves. One is Mayra, who recounts her story of ups and downs with fatalism and laughter, backgrounded by the exuberant decor of the bar she owns. Another is Charles, who seems lost, unhappy, pacing literally and metaphorically back and forth in a white, nearly empty room.

The last room holds a multimedia installation called Identidad (2015-18). It is a tribute and a memory palace, made up of possessions and memorabilia from a favourite relative to whom she was close, reconstructing some aspects of his home, weaving together the real and the imagined. 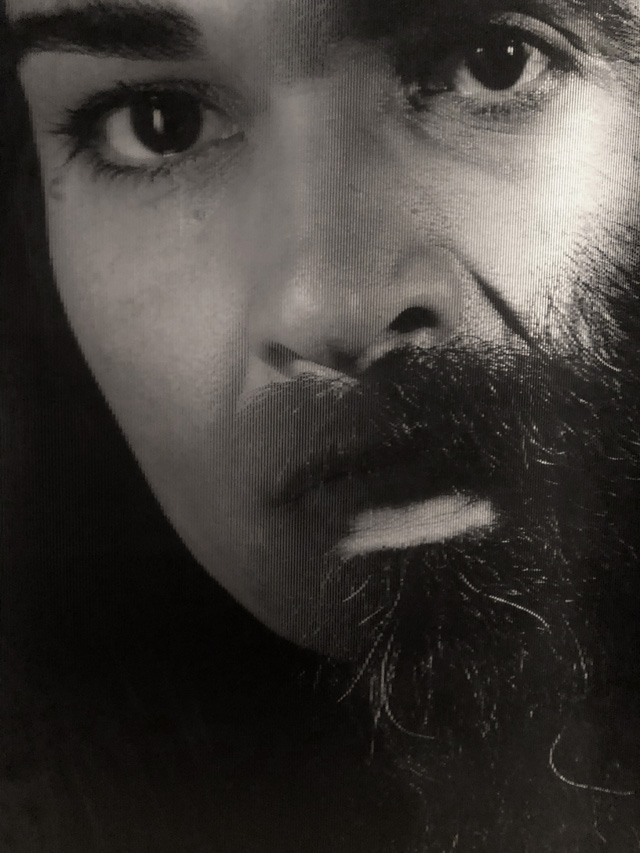 The title of the exhibition, Show Me, is also provocative. It can be read as an imperative, as a challenge, like her work. It is a demand to be shown as an artist who is a woman, whose subjects are frequently about women, unapologetically from the point of view of a woman, insisting on a parity astonishingly not yet achieved, on beholders who can see. Show Me also reverses who the critic is, demanding that men show women more respect and consideration, meeting women’s criteria, not simply the other way around. Let’s see if they are up to it. 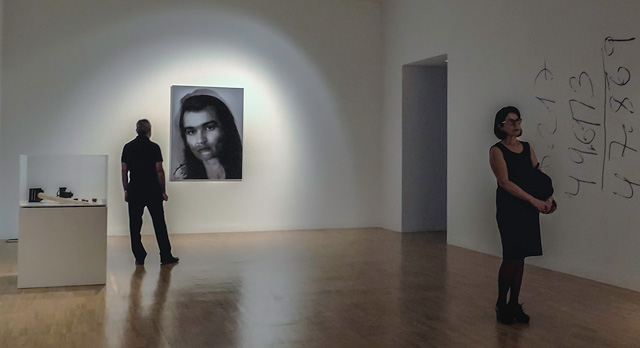