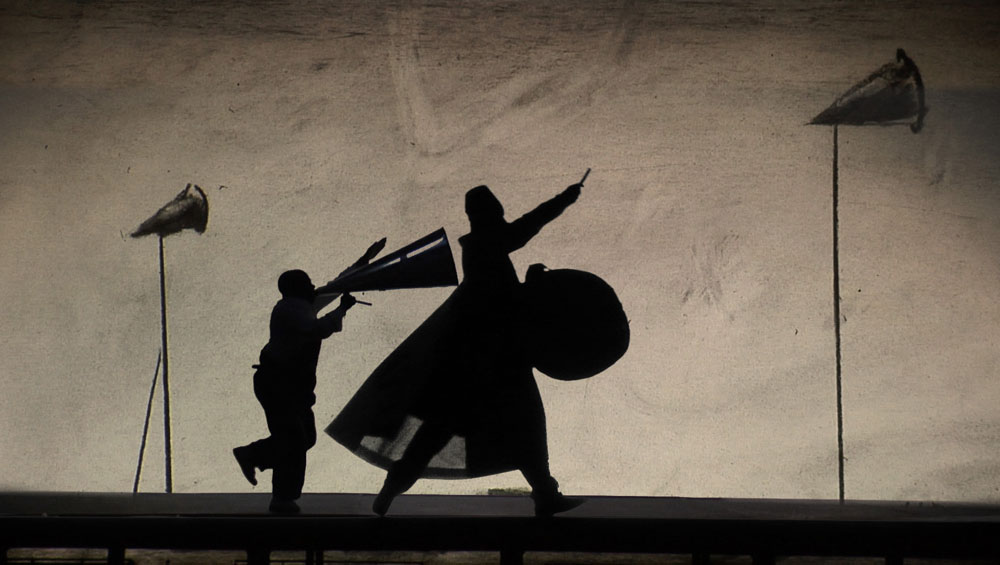 There is a well-deserved buzz around the Whitechapel Gallery’s current exhibition of William Kentridge’s work: chances to see his installations in the UK are few and far between, and they merit direct, devoted viewing. This exhibition includes some of the best work he has made since 2003, and projects, with rightful pomp, the vast and interwoven creativity of this master draughtsman, film-maker, opera and theatre director and installation artist.

Kentridge’s appeal has long been his commitment to both the craft of art-making and his conceptual range. Exemplifying this is the first installation in the show, The Refusal of Time (2012), a five-screen piece accompanied by a musical score by composer Philip Miller, with whom Kentridge works frequently. The underlying aural and visual motifs for this work are a product of the artist’s discussion of theories of time with scientist Peter Galison. There is a wild but futile drama to the spectacle: the incongruent ticking of multiple clocks, a repeated and reversed scene of romantic kiss-and-make-up, the artist ambling across screens or laying out chairs for others to walk over, one by one, while in others he stands beside himself, removing and re-donning his hat. In the centre is a machine known as the “elephant” – a huge set of bellows that demarcate time through its breath and the fairground-style plinky-plonk of organ music. This, along with the pages of books that appear as the backdrops for many of the filmed scenes, identifies the tension between mechanically measured time and space and that which is created by human methods of delineation: waking, eating, working, walking with even steps. The fairground music even conjures the sense of time as a form of longing through its nostalgic timbre. Kentridge shows creativity and human emotion as bounded by circumstance, but nonetheless rebellious, spilling off the page and seeping into the gaps between clock ticks.

He distils this further in his Second Hand Reading (2013), presented in a small side room, a flipbook film made from drawings on the pages of the Shorter Oxford English Dictionary. Fast but lyrical, and a bibliophile’s dream, the film shows the limits of the page size and margin both honoured and exceeded. Objects such as birds, trees, typewriters and megaphones draw themselves, are scribbled out, transform into other shapes, spin in space to appear three-dimensional and tear themselves up, while a sketched figure of Kentridge stalks the pages, hands in pockets, thinking. A stunning soundtrack composed and sung by South African musician Neo Muyanga helps to bring emotion and meaning to the disjoined terms and phrases that appear – “Taking the lion for a walk”; “A sonnet I have not written”, “IF”, “&”, “SO”. These highlight the suspension of meaning that occurs when words are gathered without context in a dictionary. A narrative is nonetheless discernible as we track our progress through this syncopated story via the quickly increasing or decreasing thicknesses of the pages at either edge and the alphabetic position we have reached in the book.

Kentridge positions objects and environments as forces that act on the body and the psyche. As an artist, he gives himself over to the control that materials and media exercise over him. In the installation 7 Fragments for Georges Méliès, Day for Night and Journey to the Moon (2003), shown all together in one room in this exhibition, he makes use of early cinematic techniques such as stop-motion, animation, time-lapse, frame reversals and film splicing to indicate how his drawn objects can perform for themselves, dancing, eluding and expanding beyond the studio’s confines. Darkly twee, these films bring to life sketched forms that mischievously dash off the page. Images are sprayed around, but the scenes are also chaste, somehow economical, with nothing rendered superfluous: these disobedient objects know their limits to be the page, studio, the hand, the camera’s viewfinder. Meanwhile, Kentridge himself becomes a character performing the film’s making and narrative: his body is a form of measurement, his hand at times mark-marker and at times eraser; his photographic form draws a version of himself so lively that the drawn Kentridge leaps off the paper and replaces the “real”.

In light of Kentridge’s relationship with objects, it is fitting that the show ends with O Sentimental Machine (2015), a work about Soviet politician Leon Trotsky’s exile in Turkey in 1929-33. Archival footage shows Trotsky claiming technology to be the future and calling for people to be instrumentalised as sentimental machines. Water slowly submerges the various scenes, while Kentridge appears in facial disguise, parodying Trotsky’s mannerisms. What this amounts to is a clever reversal of Trotsky’s conception of man as machine: as the exhibition shows, Kentridge does the opposite, endowing machines and objects with personality, emotional intelligence and agency.

Although Kentridge’s own figure appears in a central position in almost every work he produces, he is nonetheless a vulnerable presence. His takeover of the Whitechapel galleries feels instinctive, almost uncontrolled – even the huge staircase is adorned with a mammoth drawing of a figure in black tape, as if the walls of the gallery, like the pages of a sketchbook, cannot contain his ideas. Rather than an interpretation of our own experience, Kentridge’s visual output could plausibly be an entirely accurate drawing of a very closely parallel reality. This reality consistently frames his work through the aesthetics of cinematic monochrome and charcoal drawing, as well as repeated motifs such as birds, megaphones, typewriters and cafetières, as if mundane and common items could, in fact, be the unexpected portals to an alternative form of existence. 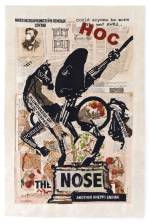 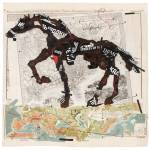