The Queens Museum has a new name and a new life. Formerly the Queens Museum of Art, it reopened its doors to the public on 9 November, after an extensive four-year expansion and renovation project. 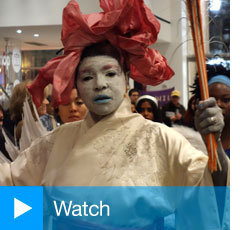 From its foundation in 1972, the museum had been housed in the northern half of an historic New York City building erected in 1937 for the 1939 World’s Fair. Since 1952, the southern half of the building had been occupied by a no less historic ice-skating rink, fondly remembered by generations of New Yorkers as the site of their first skating lessons. The New York City building has a history of use for notable public purposes. From 1946-50, it was the first headquarters of the United Nations General Assembly, and in the mid-60s, it was remodelled to accommodate New York City Pavilion at another World’s Fair. Its most recent renovation, underwritten in large part by the City and State of New York and the Queens Borough President’s Office, removed the ice-skating rink, expanding the museum into the southern part of the building and doubling its footprint to 105,000sq feet. In place of the rink, Grimshaw, the architectural firm responsible for the project, built six new galleries and an expansive central area. This change allowed for the addition of several artists’ studios for the onsite residency programme, and created space for educational needs and public events, as well as storage and support facilities.

The explicit aim of this expansion was to make the museum more visible, not only literally – to the passing motorists on the Grand Central Parkway – but also physically and culturally – to the people of New York and the international community. The outside of the structure changed, but not drastically, retaining the basic shape and features of the prewar original. The spruced-up facade of the building facing the highway is now covered by a series of glass panels. The only modification noticeable from the highway is the large lettering spelling out the museum’s name.

On entering the museum, the full extent of the renovation becomes apparent. In terms of the physical space, its interior is a paradigm of openness, efficiency and functionality. A large skylight dominates the capacious rectangular atrium that replaced the rink, providing a source of natural light not only to the central area but also to the surrounding galleries. The light is diffused through multiple louvres, which surround the skylight on all four sides and descend from it like a mesmerising geometric waterfall, stopping approximately 12ft from the floor. Six new galleries have been built around the central space, housing both permanent and changing exhibitions. A minimalist glass staircase leads to the second floor, where there is more exhibition space and a theatre. Because glass has been used wherever possible for the external walls, the museum is filled with natural light even on a grey and rainy day, providing a welcome connection to the world outside.

Exhibitions and programmes in the new space span an impressive range of topics, bringing together the building’s legacy, the museum’s roots in the city’s history, and its dedication to providing educational and curatorial support to the vibrant artistic community in the borough of Queens. Of the nine exhibitions currently on view, four – Panorama of the City of New York; From Watersheds to Faucets: The Marvel of New York City’s Water Supply System; World’s Fair Visible Storage and Gallery; and The Neustadt Collection of Tiffany Glass – either belong to the museum or are on long-term loan. These four exhibitions form the core of the collection, constituting a major part of museum’s identity. Among them, only Tiffany glass can be considered artistic in the traditional sense. The other three have a tenuous relation to art defined as either professional occupation or pleasing appearance, which may have prompted a change of the museum’s name.

Panorama is a breathtaking 9,335sq ft model of all five boroughs of the City of New York, every building and structure represented on the scale of 1:1,200. The model was originally commissioned by the legendary Robert Moses for the 1964 World’s Fair. Made of wood, plastic, paper and brass, Panorama is a dazzling sight because of its scale and the minuteness of its execution. Permanently ensconced in the southern part of the building, it was restored and “updated” in 1992 to include every edifice and architectural configuration that had appeared in the city since the model’s creation in 1964. For anyone who lives in New York, it is great fun to find a particular location in the maze of buildings, making Panorama one of the museum’s main attractions.

If Panorama can be considered (with a stretch) to be a piece of applied art, From Watersheds to Faucets is clearly a scientific exhibition. Its centrepiece is a 540sq ft relief map of the New York City Watershed, made by the City’s Department of Water Supply, Gas and Electricity for display in the 1939 World’s Fair. Surrounding it are photographs documenting the construction of the city’s water supply system and extensive wall texts explaining in detail its history and operation. The exhibition engages mind and imagination as the viewer ingests the information and becomes conscious of the extent to which the New York citizens’ lives depend on a technological system that is thoroughly embedded in the city’s fabric. The New York Watershed map does not belong to the museum, but is on a long-term loan from the city’s Department of Environmental Protection.

The handsome Tiffany glass collection received a gallery of its own on the main floor, while tchotchkes and artifacts from both the 1939 and the 1964 World’s Fairs are tucked in on the second floor, next to spacious Education Department galleries.

Temporary exhibitions at the museum all feature contemporary art that relates to people who live in Queens. Taiwan Community Fund sponsored a gallery in which part of Queens International 2013, the Queens Museum’s signature biennial, is displayed. Organised by Meiya Cheng, a Taiwan-based curator, and Hitomi Iwasaki, director of exhibition and curator at the Queens Museum, the biennial’s theme is site-specificity, appropriate for its renovated locale. In this case, site-specificity is interpreted as the “idea of collaboration between curators and artists and their surroundings”, and is defined by “transgression of boundaries between art and cultural practices”. Intentionally open-ended, this 38-artist biennial includes works and performances by international artists living in Queens as well as nine artists from Taiwan, ostensibly to demonstrate the idea of community as: “The collective imagination of ‘a place’ beyond geographical boundaries.”

Another connection to Taiwan is traced in the work of Queens-based photographer Jeff Chien-Hsing Liao, who made a series of astonishing pigment ink prints documenting every stage of the renovation project. Chien-Hsing Liao’s photographs, displayed in the Panorama gallery, are exceptional in their detail and refinement of the colour scheme. Because of their thoroughness and descriptive clarity, not only are these photographs attractive works of art, but they are also unique documents of the museum’s history.

Mexican artist Pedro Reyes constructed another imaginary environment in the brand new atrium. The People’s United Nations (pUN) connects to the site’s history through a mock reenactment of a UN session. Reyes wants to gather 195 “delegates” from New York City immigrants from countries that make up the UN for two days of interactive games, group therapy and social science experiments, to wrestle with issues they find crucial for themselves and their communities. His installation in the atrium stages the site for this gathering, with multiple boxes and a sculpture, Colloquium. In the absence of the assembly, the atrium is used for performances and by the visiting public. Another Hispanic community from Queens is honoured by a small, but sprightly exhibition, Citizens of the World: Cuba in Queens, a show of contemporary Cuban art, in a gallery hidden behind Panorama. 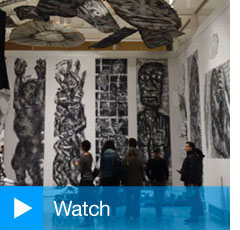 Last but not least, Peter Schumann, legendary founder of Bread and Puppet Theatre, filled two big galleries with larger-than-life papier-mache figures, paintings, drawings and handmade books. He also painted a mural right around the outside wall of one gallery, which is visible from the entrance and atrium. Everything in Schumann’s exhibition is done in black-and-white, pointing to a possible inspiration by the ideas of William Kentridge, another notable theatrical artist working in the visual arts. While Kentridge’s primary medium is drawing and film, as a dancer and sculptor, Schumann works mostly in 3D. The Shatterer, the title of his exhibition, may refer to the shattering of conventions he wishes to perform with his objects and public appearances. As part of the exhibition, his first one-man show, Schumann planned performances and other events, such as a film programme dedicated to the Bread and Puppet Theatre at Anthology Film Archives.

In addition to the ambitious exhibition agenda, the Queens Museum expanded its educational and community outreach, announcing its renovated space with a month-long programme of festivities and performances. By all accounts, the museum’s director, Tom Finkelpearl, its board, the borough of Queens, and the city government have given the people of New York a wonderful place to experience art, intellectual adventure and public interaction. Along with its name and its new website, Queens Museum has changed its identity. Still, it is good to know that the demolished rink did not disappear completely, but has been resurrected as the World Ice Arena at the other end of the Flushing Meadows Corona Park. 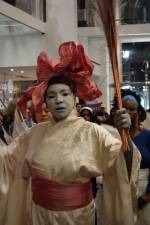 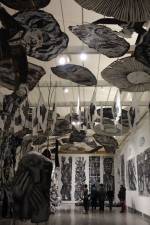 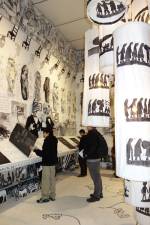 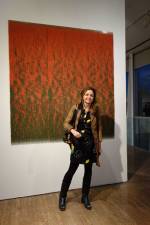 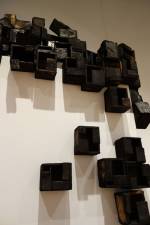