What Marcel Duchamp Taught Me

What Marcel Duchamp Taught Me

One hundred years after Marcel Duchamp produced his first readymade, more than 50 artists, including Peter Blake, Michael Craig-Martin and Janet Laurence, show how he influenced their work

Art was revolutionised when in 1913 Marcel Duchamp (1887-1968) created his first “readymade”, Bicycle Wheel, although it was not exhibited until the following year. To mark the centenary of Duchamp’s first readymade, What Marcel Duchamp Taught Me, the ambitious group show at the Fine Art Society on New Bond Street, London, seeks to establish his wide-ranging influence on contemporary artists. The Fine Art Society is Britain’s oldest commercial gallery, established in 1876, and this is its largest exhibition to date, taking up all five floors of the gallery.

Kate Bryan, the society’s curator of contemporary art, took an impassioned approach to the exhibition. A rare phenomenon for contemporary art exhibitions were the queues that formed soon after the show opened, in response, no doubt, to the positive press reviews, testament to the fact that Duchamp’s ironic iconoclasm is still relevant. Aware of his vital legacy in relation to the way in which art has been perceived through the 20th century and into the present, Bryan was keen to point out that Duchamp was an artist full of contradictions. It was necessary she believed for artists – not historians – to respond to his contribution to contemporary art. The exhibition features more than 50 contemporary artists whose work presents a rich testimony to the master of the readymade.

The readymade challenged the very notion of art itself, with Fountain (1917) becoming an icon of 20th-century art. The original was a standard urinal, which Duchamp bought from a plumbers’ merchant and laid flat rather than in the usual upright position. It was submitted to an exhibition organised by the Society of Independent Artists in New York. The board of directors, although bound by the constitution of the society to accept all members’ submissions on payment of a fee, refused to exhibit it. Fountain dispelled what Duchamp termed “retinal art” in favour of the “readymade” (also his term) demanding of the viewer the creation of a frame and context for the work, and thus a new reality. Conceptual art was thus born of Duchamp’s audacious interrogation of the meaning of art. Irony, a key aspect of art today, can be traced back to Duchamp’s sense of farce, satire a trigger for profundity.

Laurence, who was visiting London from Sydney for the opening, told me: “The methods licensed by Duchamp enabled artists to use any kind of materials for art in order to imply meaning and association. It’s difficult to imagine art today without Duchamp. He enabled us to begin the process of making art with an idea. Non-retinal processes and associations play an important part in art today, as a consequence of Duchamp’s use of the readymade.” Laurence recalled seeing Duchamp’s The Large Glass (1915-23) in Philadelphia for the first time and “being transfixed by the material itself; the remarkable presence the art work established as material (cracked glass), before reading the work as a whole”. Laurence uses glass extensively, which has implications of fluidity and solidity, in her vitrine works: “The studio becomes a laboratory where experimentation and transformation through creative work take place, an interface between intuition and cognition.” She is keen to establish that Duchamp, Joseph Beuys (1921-86) and Joseph Cornell (1903-72) have all played key roles in the evolution of her practice. Laurence uses glass to create veils and echoes, a hybrid form between sculpture, photography and architecture that speaks of the powerful relationship between mankind and nature.

British pop artist Peter Blake has created two new collages from found materials depicting Duchamp at an animals’ masked ball. He famously painted The Marcel Duchamp World Tour (2000–2005), sending his artistic hero around the world to meet Elvis, The Spice Girls, Tracey Emin and Edward Hopper. The British portrait painter Jonathan Yeo has created a double portrait, Untitled (2014), which is a self-portrait with a portrait of Duchamp. He explains Duchamp’s attitude to portraiture: “Duchamp seemed to be exploring the genre itself, often using his own image as a subject to make a point … The idea of retaining the formal characteristics of the genre, while using it to highlight conceptual ideas, has always seemed to me the way portraiture is most likely to evolve in the future.”

Craig-Martin has made a number of paintings and prints that portray Duchamp’s readymade sculptures. For the Fine Art Society exhibition he has painted a new acrylic on aluminium entitled Flesh Willow(2014), which is based on Duchamp’s Fresh Widow (1920).As a teacher at Goldsmiths College, Craig-Martin was a strong influence on the Young British Artists (the YBAs), as they became known. In a recent interview with Studio International, he explained the manner in which an object or work of art transcends appearance. Having been brought up a Catholic, he realised that transubstantiation (when applied to art) was a way of doing something of colossal significance without having to do anything. He returned to the question of how art achieved meaning and metaphysical power. In 1973, he created The Oak Tree using a glass of water, but asserting: “It’s not actually water, it’s an oak tree.” When he makes a painting and says, “It’s a chair yet it isn’t a chair, it’s a painting”, the painting is an object and the chair is an object. There is this slippage between idea and language and object.

It is hard to believe that What Marcel Duchamp Taught Me celebrates the centenary of the first readymade in art, such was his prescient iconoclasm. Craig-Martin reminds us though: “If you are going to be an artist, you have not to be too reverential. You can’t be an art lover in the sense that other people can, and be an artist. You have to be a bit of a vandal. You have to look at it as a resource.”

• Marcel Duchamp, La Peinture, Même at the Pompidou Centre, Paris until 5 January, offers a rare opportunity to see an appraisal of the French-born artist who spent most of his career in America, arriving there in 1915. 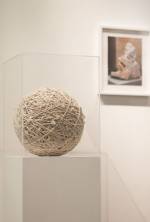