Michael Craig-Martin has three exhibitions opening this month, one at Chatsworth House in Derbyshire and two in London. At Chatsworth, the 17th-century house and its superb grounds can be viewed through the framing created by Craig-Martin’s 3D versions of his immediately identifiable line drawings in brightly coloured metal, for example a pink stiletto-heeled shoe. At Alan Cristea Gallery, he is showing screen prints alongside a show he has curated of single works by artist-printmakers whom he admires: Andy Warhol, Roy Lichtenstein, Pablo Picasso, Georges Braque and Henri Matisse.

The exhibition at Chatsworth comprises a major display of sculpture in the garden with new works made specifically for this exhibition. Each work is an immense line drawing in space, fabricated in steel and painted in a vibrant hue. Inside the house, Craig-Martin highlights sculptures from the Devonshire Collection, and selects particularly engaging portraits for the Old Master Drawings Cabinet, including drawings by Hans Holbein, Annibale Carracci and Domenico Ghirlandaio. Here, the artist is in his element, as he was when he curated the exhibition Drawing the Line at the Whitechapel Gallery in 1995, which he described as a history of drawing, but one that also charted “my own life as an artist”.

Craig-Martin was born in Dublin in 1941, but grew up in the US, mostly based in Washington DC. He returned to Europe in the mid-60s and was a key figure in the first generation of British conceptual artists. As a tutor at Goldsmiths College from 1974-88 and 1994-2000, he had a significant influence on two generations of young British artists. He studied art at Yale during its heyday in the 60s and there he received a Bauhaus training in the course devised and taught by Josef Albers. Although Albers had just left Yale, Craig-Martin took all the courses created by him. “They were taught by his assistants, who had been taught by him and there was no question that you were getting what Albers wanted,” he says. “I knew that they were amazingly intellectually coherent and I have always thought one of the things that has interested me with certain people is that they develop a kind of internal logic about what they do, an aesthetic logic about what they do.”

Drawing education for Albers involved copious line drawing, which enabled Craig-Martin to develop a spatial awareness and lucidity of movement and thought. There are distinct strains within the term “conceptual drawing”; there are many artists today who use Joseph Beuys’s ideas and practice as a departure point for their own work. Where Craig-Martin’s work is concerned, it is the work of Sol LeWitt that springs to mind, not just because they have both made large wall drawings, but because there seems to be a precision and mathematical feel; a link between mathematical precision and organic growth.

Drawing is pivotal to Craig-Martin’s work. Since his student days he has learned to interrogate its meaning and the connotations it created. He says: “The world of my youth as an artist was a world in which the principal presence in art was abstraction. Representation was frowned on. I made a very deliberate decision to create an extreme form of representation, where the subject was unmistakeable. If it is a drawing of a book, it could not be anything else; there would be no question about it. But to apply what I thought about other things which had come from this world of abstraction and conceptualism but which had questioned representation through drawing. What had become my natural point of view, I realised, about these things was different to most people involved with representational or figurative work.”

Representational drawing, in his view, was a formal means that, for most people who employed it, was merely something that existed, a language to be used but not questioned. What interested Craig-Martin were both the interrogation itself and the desperate sense of urgency for it to be revived in order to be once more alive, as in the mark-making of the creators of the caves of Lascaux. He was interested in defining the inherent nature of the drawn line, precisely what it was for representation to be possible: “You draw a chair and it doesn’t look anything like a chair! To me philosophically and aesthetically, there is no entry. It’s miraculous.”

Although Craig-Martin did the Albers colour course, and very much wanted to work with colour, for many years he avoided it: a case of “Who’s afraid of Red, Yellow and Blue?” As soon as he discovered a route into work in colour, he recalls that he suddenly found it terribly exciting and easy to apply. It marked a curious transition from his student work such as the black-and-white film made in Ireland, to the conceptual work that employed mirrors, to the work for which he is now known. The film, in fact, looks like a visualisation of Samuel Beckett’s plays, sometimes known as “Hymns to Nothingness”, influenced as he was by Beckett’s writing and the films of Ingmar Bergman. Raised and educated as a Catholic, Craig-Martin became an atheist as a young man. While atheism may, perhaps, have been a liberating influence, he was still imbued with an overall view of things. Catholicism, he says, accounts for absolutely everything in this life and the next and beyond. He says he understands why many Catholics, having lost their faith become communists because communism also attempted to take account of everything: “I think if you have been brought up within a strict system, there is a certain inner desire to account for everything, and perhaps that is in me. It is interesting how many ex-Catholics are artists.”

The conceptual notion of transubstantiation and that of alchemy (rather more fashionable in art practice of the past 60 years) is remarkable in the sense that something so strange can be inculcated into minds and souls from so young an age, as if to be completely acceptable. Yet transubstantiation was commonplace in the ancient world. The manner in which an object or work of art transcends appearance in its meaning forms the basis of Craig-Martin’s conceptual philosophy: he realised that transubstantiation was a way of doing something of colossal significance without having to do anything. He returned to the question of how art achieved meaning and metaphysical power. In 1973, he created The Oak Tree using a glass of water, but asserting: “It’s not actually water, it’s an oak tree.” When he makes a painting and says, “It’s a chair yet it isn’t a chair, it’s a painting”, the painting is an object and the chair is an object. There is this slippage between idea and language and object”.

Craig-Martin has been an important artist since moving from the US to England in 1973 the mid-60s. His role as a teacher brought him significant recognition, as his students at Goldsmiths who went on to become the YBAs will testify. He is keen to point out that, in order to be an artist, one cannot be too reverential: “You have, in fact, to be a bit of a vandal.” Iconoclasm in inherent in his outwardly elegant, precise work; in this, he continues to make a major contribution to art in Britain.

• All quotes from Michael Craig-Martin are from an interview with Janet McKenzie on 21 January 2014, London. 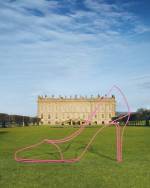 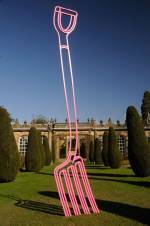 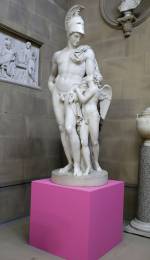 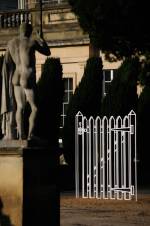