In panoramic scenes of the Californian desert, Sambunaris captures the vastness and grandeur of the land, seeing it through the lens of social, political and environmental concerns 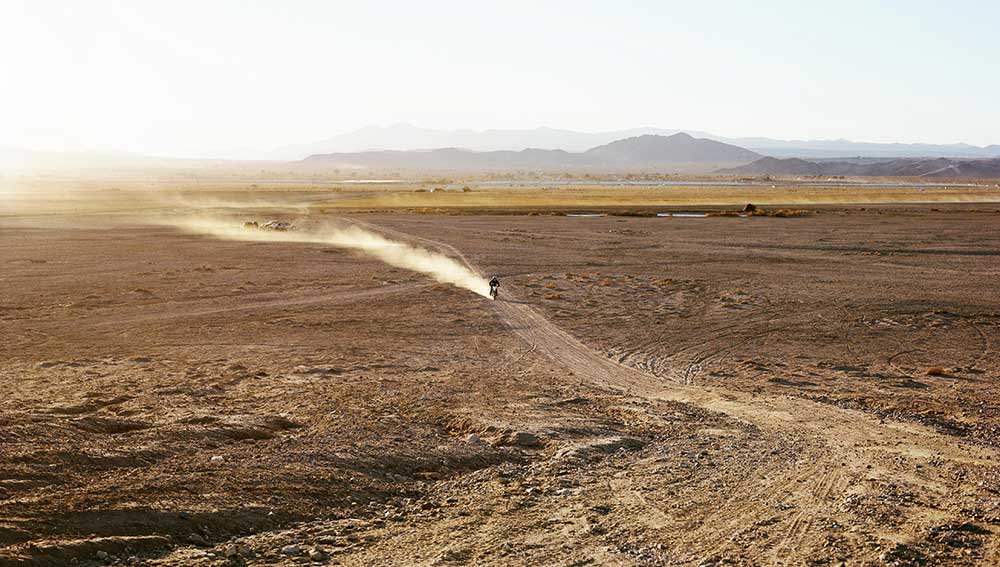 There are only seven – large but not overwhelmingly so – photographs from 2020 and 2021 by Victoria Sambunaris on view at Yancey Richardson; nonetheless, they easily claim the entire gallery. In meticulous images of Joshua Tree, Death Valley, the Algodones dunes and other Californian desert sites, she deftly captures the vastness of the panorama before her, wielding a classic 5 x 7 field camera and colour negative film. It is not an easy feat since the majesty of such scenes is too easily lost in translation when transferred from human experience to camera eye, but Sambunaris achieves that with characteristic elegance and understatement, as well as purpose. There is also a 14-minute video as a kind of prologue to the show, which focuses on the same locations in a series of vignettes in motion with what seems to be ambient sound, an addendum to her project’s narratives. However, it is the photographs, with their exquisite (analogue) clarity and coloration, momentarily paused, that are the focal point of this exhibition. 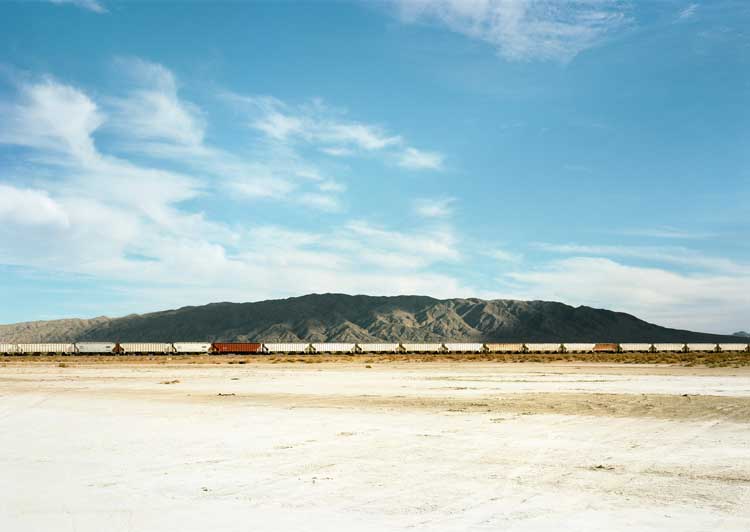 Viewing the landscape from an objectifying distance, Sambunaris leads the viewer to imaginatively absorb the real dimensions pictured, her format all the more persuasive because it is not attempting to be more literally immersive. Instead, her landscapes’ factuality comes in part from their textural richness; sand, dirt, water, clouds, rocks and sagebrush are granularly recorded as well as the cannily selected details that anchor each photograph. For one instance, a single red car in a series of white ones of a train crossing the horizon (we might wonder what it is transporting?) snags our gaze, which then swerves right to the centre and just past it to several puffs of clouds rising like smoke signals overhead. In the foreground, occupying more than a third of the composition, is a dried-up lakebed. The balance between landscape and sky seesaw slightly in these images, one often prevailing over the other for a moment, only to cede its position in another, coming to equilibrium in two of them. As for human presence and activities, there is no contest; the grandeur (and indifference) of nature wins, the intricate markings in the sand, say, of dune buggies and motorcyclists are soon erased, the long scarf of dust trailing the (tiny) figure of a rider in a billowing of temporary, disruptive glory will soon settle, the intruder forgotten. 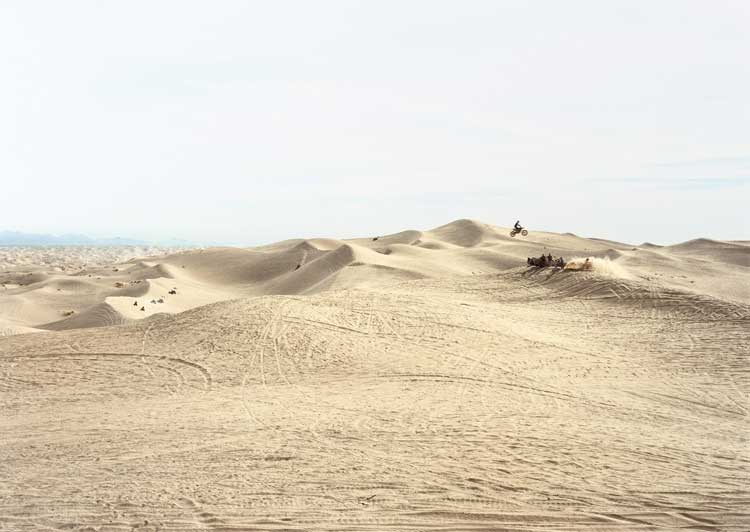 While Sambunaris does not traffic in the region’s myths and cliches, nor is she nostalgic for a past that has often been overly simplified, revised or invented, her project inevitably brushes against the saga of manifest destiny. For one thing, although her photos are related to those of the pioneering 19th-century (white male) photographers who documented the splendours of the west, enraptured by its challenging emptiness (although not as uninhabited as it was once considered), Sambunaris sees it through the lens of social, political and environmental concerns, without a proprietary romanticism and sweeping sense of privilege. 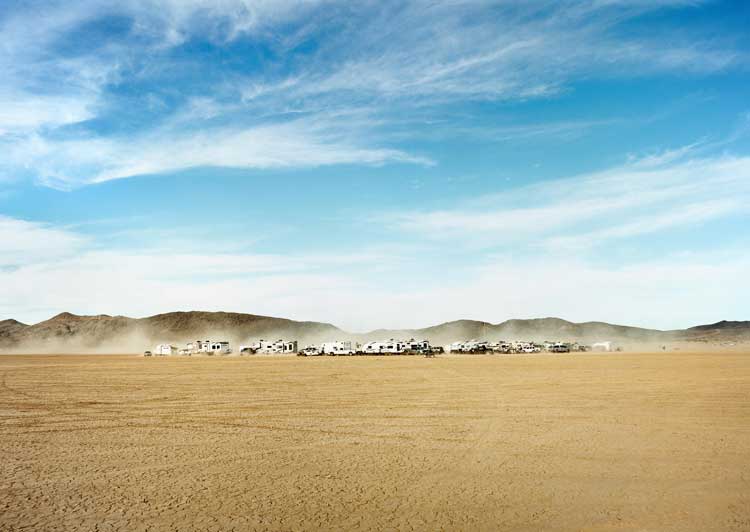 It is also a nod to the American road trip. Sambunaris packs her car every year, sometimes several times a year, and goes camping, as she has done for the past two decades and more, heading across the country alone for months on end to explore a particular region in depth, steeping her senses in it to create what she calls a “taxonomy of a landscape”. She also returns to certain areas at intervals, to note the changes. At its core, her process is intuitive, a subjective odyssey. She never quite knows in advance what she will do, but something clicks into place at some point. For this cycle, it was when she saw Lake Mead, the reservoir formed by the creation of the Hoover Dam that serves millions upon millions of people across several states and Mexico, shocked by how perilously low its waterline was. What she also discovered was that parts of this wilderness were overrun by “hordes” of RV campers and vans, target shooters and others during the pandemic, revellers and off-roaders evoking those making the far more perilous westward trek of earlier days. One of her photos shows a line of campers stretched across the far horizon, which is set below the midline of the composition to underscore the big skies of the west, foregrounded by another great expanse of parched earth. For a moment, they appear to be a wagon train protectively encircling itself: a mirage, a glitch in time.

One of the standouts here is Untitled (Dune Buggy), All American Canal, California, 2021. It seems a platonic vision of a beach, the undulating profile of dune and water mirroring each other, cut through by a dark diagonal line that reads as a road. It is utterly compelling in its lucid beauty, its delicate gradations of blues, creams and darker beiges, the spare colour scheme of almost all the photographs here with an additional shade or so. The darker blue of the water seem washed across the bottom, painted on, still wet, precious. The only image with water, its increasing absence in the region signals the advent of a huge catastrophe and the major theme of the show. In the expanse of the upper quadrant is a dot that turns out to be a dune buggy, human activity (rather frivolously, pointedly negligible in this instance) pitted against nature. It tells a tale in which scale is both subject and metaphor and human aspirations and their consequences double-edged, signifying not only triumph but also a devil’s temptation, a devil’s bargain.

These images address landscape as history and poetics, entwining eons of time with the present, evoking hubris and humility, violence and quietude, and complexity and complicity –with Sambunaris as a witness, her testimony concise and reverberant.