The current Velázquez exhibition is certainly a show to which two visits can scarcely do justice. The important preliminary to this exhibition has to be his group painting 'Las Meninas' (unfortunately unable to travel for this exhibition from Spain). In this Spanish royal family snapshot, the Princess, the Infanta Margarita, aged four, with her maids of honour and courtiers, are all engaged in a calm but active urgency, the dressing in preparation, all but done. There, standing to the left of the picture frame, with a fine brush poised in his hand, is Diego Velázquez himself. Rearward to the viewpoint but in front of the edge of the actual canvas, which is disproportionately tall, he stands upright, seemingly weighing up the composition. In fact, Velázquez seems to be partially presenting himself as the subject of a self-portrait. At the back wall of the room is a mirror, which cunningly reveals the presence of the King and Queen as fussy parents, yet not wishing to intrude. A mysterious male figure fills a doorway to the back of the room, watching.

In this exhibition at the National Gallery, the retrospective view allows the first room to be dedicated to Velázquez's early work in his own town, Seville. The second room is notable for showing 'The Forge' ('Apollo at the Forge of Vulcan', 1630) in prime position, but the overwhelmingly tall (over six feet) portrait of the Count, Duke of Olivares, Philip IV's mentor and chief minister dominates the entrance position. In Room Three, again, the portrait of the dwarf Lezcano can be compared with the portrait of Baltasar Carlos. This nine-year-old prince is shown on a pony. With 'The Forge' demanding attention by its sheer configuration, Velázquez is seen to be increasing the tempo of his brushwork, yet never losing control.

What came to be of crucial importance to Velázquez's career was his sojourn in Rome (1629-31) when he was able to increase his stature by being welcomed, known only by repute by a somewhat abstemious and wary Pope Innocent X. In the late 20th century, the British painter, Francis Bacon, with great perception, fastened on to this individual's suspicious and supercilious qualities in a later series of works, revealing of Innocent's own inner psychology. But what was crucial to Velázquez was to be able to return to Madrid with papal support for his petition to be admitted to the nobility by the Spanish king. This had previously stuck, on account of Velázquez's Jewish blood, as well as because of the fact that painters were, as 'tradesmen', not considered worthy of such elevation, so debarring Velázquez on two counts. But in due course, with the Papal blessing he had received, the King was disposed to admit the painter to the ranks of the select.

In any case, on getting back to Madrid in 1631, Velázquez's career surged sharply forward. His portrait of King Philip IV in 1635 was to capture both the forthright essence of his kingship, but also traces of his vulnerability. The street painter from Seville had at last completed this own upward trajectory. Room One includes such early works from the Wellington Collection as 'The Water Seller of Seville' and many brilliant early works come from the Prado. In his portrait (in Room Two) of the court dwarf, Francisco Lezcano, is expressed a tragic invocation of what it means to be just a dwarf. There is an interesting generic effect, given contemporary interest in DNA effects: works loaned by the Kunsthistorisches museum in Vienna, formerly the property of the Hapsburgs, give visual linkage through facial similarity between them and the Spanish royal family to which they have been closely related In the full-length portrait of Queen Mariana of Austria, the Queen as 'Empress'. While the smug expression can be forgiven in one entering the world at the age of 17, one can connect this portrait via likenesses through Hapsburg blood - Mariana was in fact the niece of her husband: and other smug little faces bear down on the viewer here. How did Velázquez himself survive the vicissitudes of courtly life? One has only to look at the 'Rokeby Venus' to realise that his love for the female of the species was second to none, and for the diversions to be offered as a kind of survival therapy.

Velázquez also encompassed in his work the 'sport of kings', focusing on the ritual pleasures of the boar hunt (skilfully restored by the National Gallery itself for this exhibition). But in Britain we are fortunate above all else to hold that unique and outstanding 'Rokeby Venus', exhibited here from the National Gallery's own permanent collection, appropriately climacteric in this exhibition when displayed in Room Four (where Pope Innocent IV seems to offer appropriately papal dismissal of the female nude). It says much for Velázquez's own charm and persuasion that he carried an actual Papal letter of support for his personal ambition back to Spain.

In José Ortega y Gasset's influential Introduction to Velázquez (1943) can be found a key critical tribute to the artist: 'Velázquez (possesses) the most exemplary understanding of non-existence'. He goes on to say that Velázquez sought to translate what was 'everyday' into 'permanent surprise'. Velázquez managed by transferring reality to the picture, without diminishing its force, also to gain 'the fascination of the unreal'. 'Velázquez', says Ortega y Gasset, 'succeeds in achieving a retraction of painting itself into a state of pure visuality'.

Ortega y Gasset considers it central to Velázquez that he established his own career by his own criteria, his own language. Through his diplomatic skills, and by sure force of personality, he survived the vagaries of court life. Velázquez, as court painters were prevailed upon to do, fulfilled 'multitasking' succinctly. At the Escorial, he supervised the design of the Royal Mausoleum, designed to show the Royal family in death in as sumptuous and golden a light as in life.

An interesting byproduct of this grand exhibition is the way in which the National Gallery have used the four rooms to harmonise with and enhance the style and manner of Velázquez's era. This aggrandisement of these four main rooms endows them as they were intended to be, an ambition sustained by Venturi and Scott-Brown in the new wing as by the architect Wilkins in the original Victorian design. 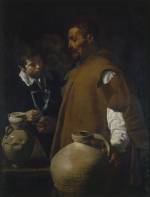 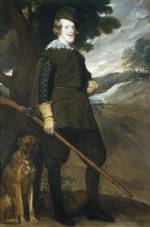 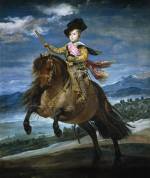 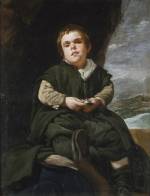