Raven Row reopened with a major survey of Gianfranco Baruchello, a rambunctious and polymathic master of contemporary Italian art 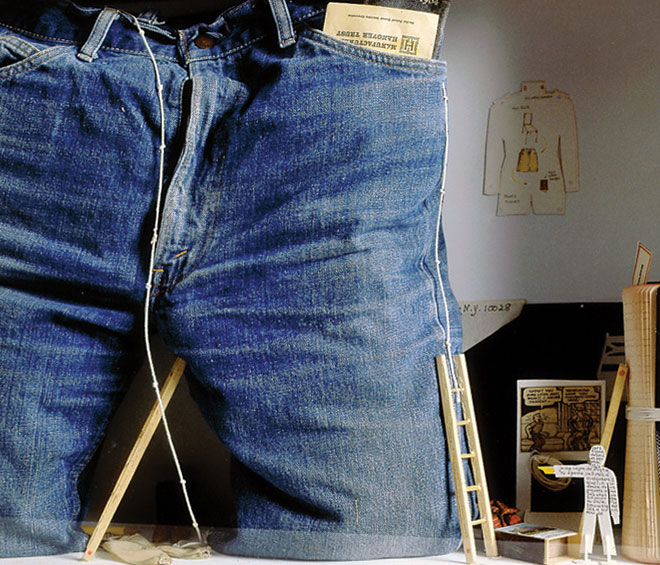 How to begin to describe the work of Gianfranco Baruchello (b1924), one of Italy’s most distinctive and variegated contemporary artists? In a career spanning almost 60 years, he has produced paintings, drawings, collages, sculptures, installations, films, plays, fiction, poetry, essays, happenings and been involved in a pair of experimental businesses. Incidents of Lesser Account – a survey of his work at London’s Raven Row – limits the palette to his video art, box-based assemblages and paintings, and yet even then we are subjected to a matryoshka doll of images-within-images, ideas-within-ideas. Remarkably, it is the first major exhibition of his work in the UK. 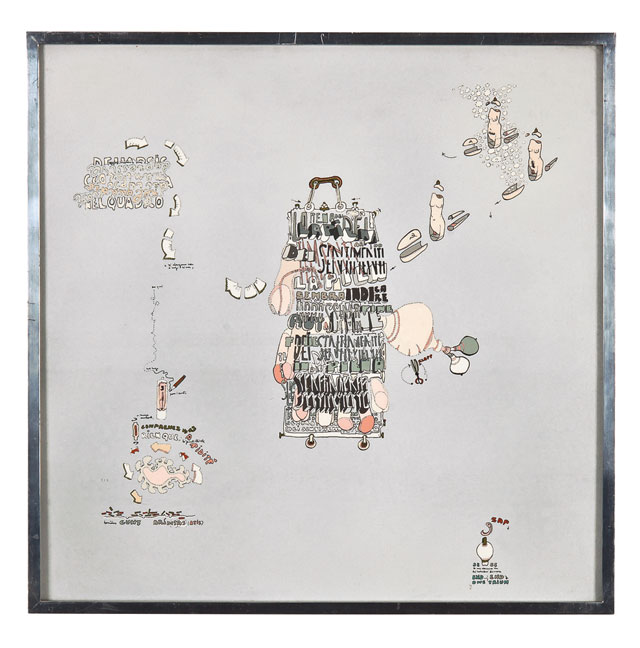 Choose any one of the 50 or so wall-mounted works in the exhibition, and you will likely find a dense web of tiny, cartoon-esque paintings of objects, people and places, painted with incredible precision, sometimes on paper, wood and canvases but most commonly on aluminium, sometimes joined by snatches of text in a polyglot array of languages. Sometimes there are elements of collage; on occasions the aluminium plate sits behind a pair of acrylic layers, themselves painted on to create a three-dimensional effect. With a few exceptions, the background is a white field, and even these exceptions are generally colour fields, as with the turquoise Ne spuntano di nuovi con gambi grassi e bianchi (New ones pop up with fat white stems, 1967). For many artists after the disarray of the second world war and the heart-on-sleeve excess of abstract expressionism, white provided a sense of cleanliness, simplicity and starting afresh. In Baruchello’s hands, it instead becomes a field of misrule, an indeterminate space in which everything and anything can be collocated. 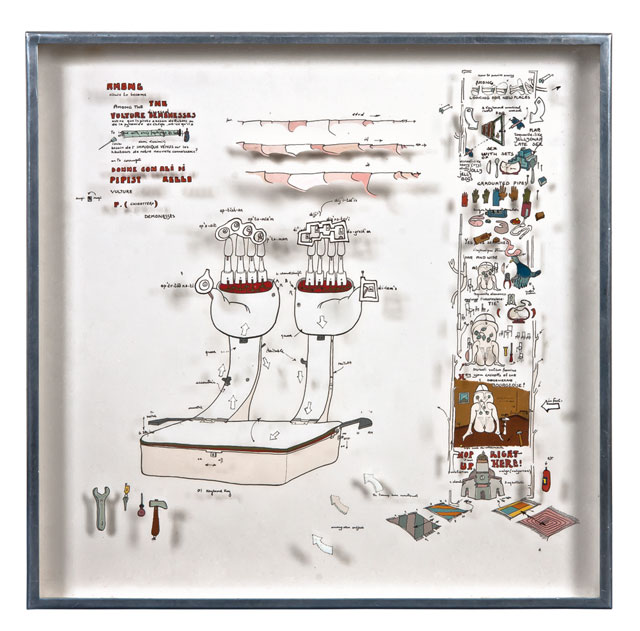 Analogy provides a useful way in. Baruchello’s framed pieces resemble maps, especially the fantastical ones akin to those a child might draw. They also echo instruction manuals, especially when they use arrows to link their pictorial and written motifs. And with their globular forms, artery-like branches and suggestive organ-like shapes, they have something of the anatomical drawing and the long tradition of the bodily grotesque, stretching out from Hieronymus Bosch’s obscene entanglements. In a conversation with the artist in 1970, published in a catalogue to accompany an exhibition of Baruchello’s work at Galleria Schwarz in Milan, Umberto Eco told him: “You are the most traditional painter that ever existed.” And, indeed, Baruchello’s placement of components atop blank space calls to mind visual culture from before the development of Renaissance perspective: medieval tapestries, classical mosaics, Egyptian hieroglyphs and parietal art. As curator Luca Cerizza says in his eassay accompanying the exhibition, Baruchello’s works are “cave paintings for the electronic age”. 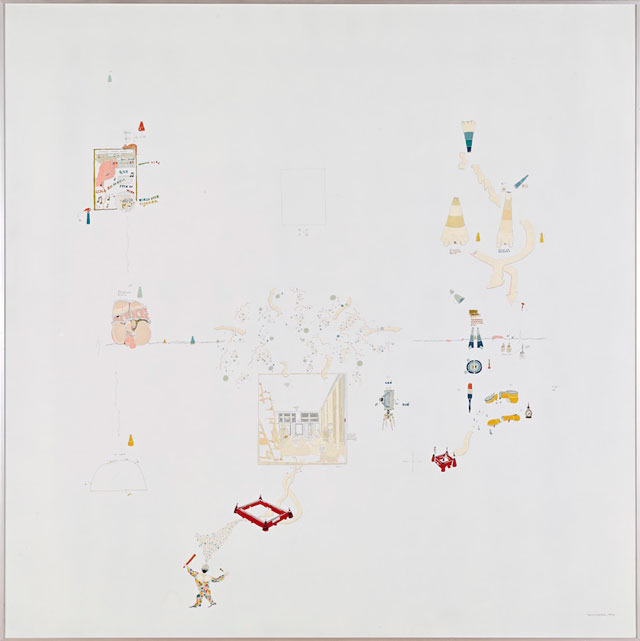 As with prehistoric art, Baruchello’s art tempts you to seek intention while making such a quest nigh impossible. The density of references from history, philosophy, literature and popular culture is taxing enough; the relationship between each further complicates matters. Marcel Duchamp, a defining influence and friend, said that Baruchello’s pieces should be “viewed from close up over the course of an hour”, and deciphering the mass of images, words and structures that appear in the artist’s oeuvre would be a project for several lifetimes.

Baruchello has lived two ostensibly very different lives. Born to a middle-class family in the Tuscan port city of Livorno, he grew up under fascism, an experience that fuelled a longstanding distrust of order and systems. Art was not his first career choice: after the war, he studied law, worked in the chemical industry and, in 1949, took over a small vaccine business part-founded by his father. A decade later, having transformed it into a major biochemical research firm, he resigned and, aged around 35, began his artistic practice. 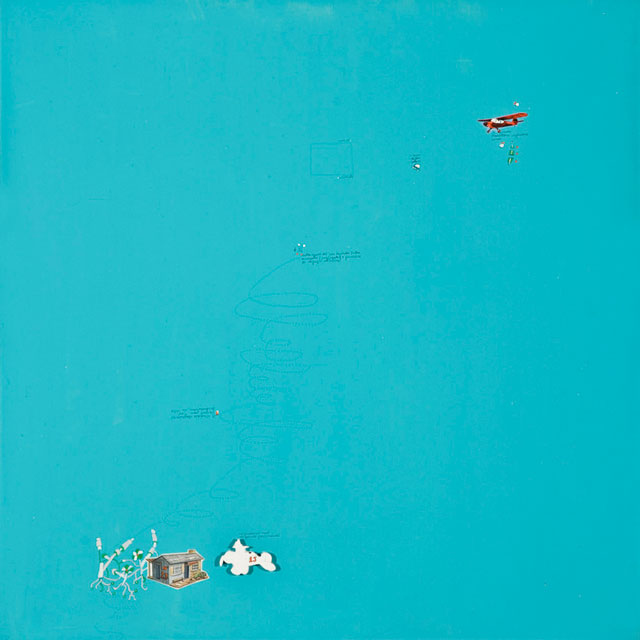 Though formally untrained, Baruchello was no outsider artist. He was immersed in contemporary theory and literature, and befriended avant-garde figures such as Chilean painter Roberto Matta and the radical French poet and critic Alain Jouffroy. Baruchello’s earliest pieces included the Altre Tracce (Other Traces; not included at Raven Row), white canvases painted with nets of black lines, as if Duchamp’s Sixteen Miles of String (1942) had been pressed on to a sheet for preservation. He also produced sculptures from found objects, in a parallel to nouveau réalisme. But it was when he started exploring the problems of meaning and association that Baruchello found his metier. The key piece Primo Alfabeto (First Alphabet,1959-62)consists of a set of symbols that, though they conjure both calligraphic forms and Joan Miró’s blots, remain enigmatic: signifiers without a signified.

Baruchello’s pictorial language developed with extraordinary speed. His first two-dimensional works were on paper but, by 1962, he was using wooden panels and, by 1966, the whitewashed aluminium plates that became a hallmark. At around the same time, he began adding text. There is a consistency to Baruchello’s style, including a series of visual motifs that reverberate from the 60s to the present day. A pair of 2015 works on cardboard and Plexiglas appear as if they could have dated from any point in the past 50 years. But, because of the excitement contained in each piece and the uniqueness of the style, it seldom becomes wearisome. 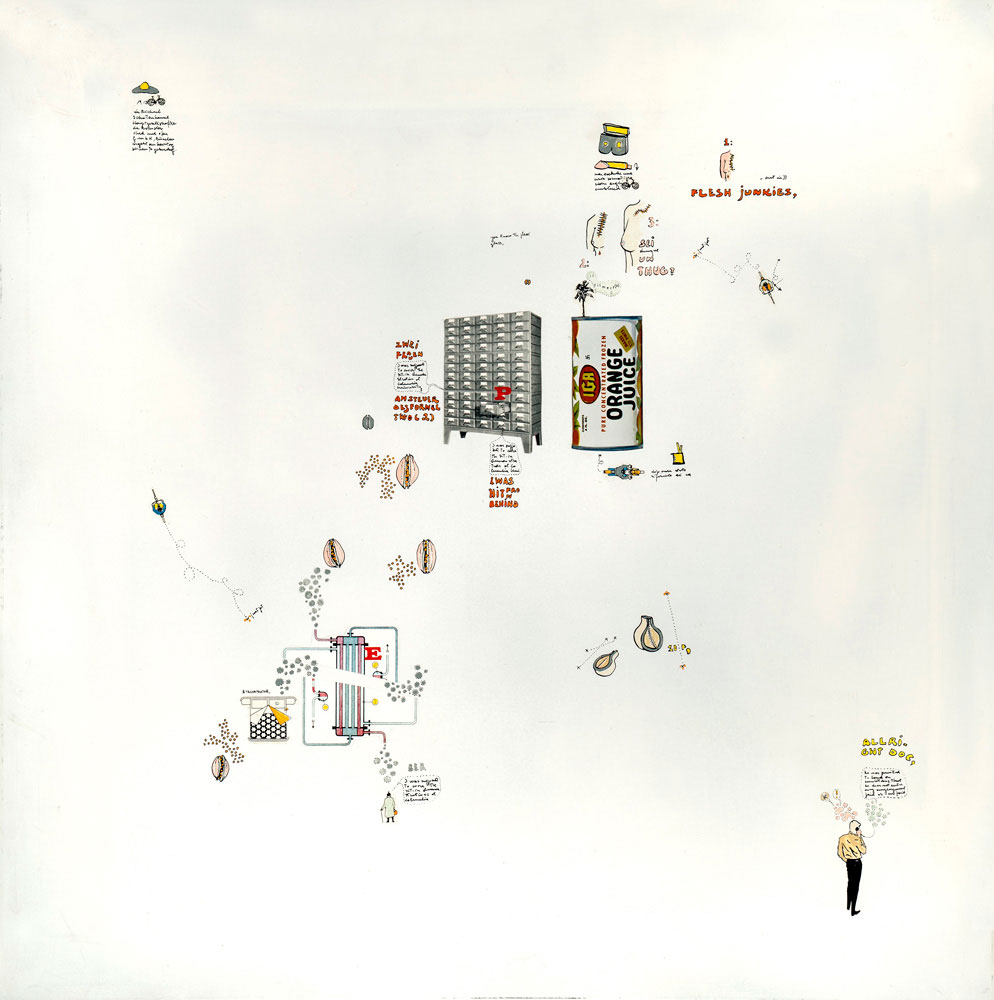 By the end of the 60s, Baruchello had been exhibited widely, been collected by major American institutions, including New York’s Museum of Modern Art and the Guggenheim, and selected for exhibitions curated by Duchamp and George Maciunas. It is obvious why these arch-provocateurs took to Baruchello. While pop art subverted hierarchies by granting the low the status of the high, Baruchello collapsed hierarchy altogether, placing everything from the head of Mao to genitalia in the same spatial field. In Diego Kid al Servizio di sua Maestà (Diego Kid on His Majesty’s Service, 1974), he mocks Diego Velázquez’s position as a court painter by recreating Las Meninas in miniature and revealing the banal thoughts of the royal family as they sit.

Archivio delle Ossessioni. Il Vegetale (Archive of Obsessions. The Plant World, 1979), one of Baruchello’s excellent assemblages in the mould of Kurt Schwitters and Joseph Cornell, problematises the hierarchies of archiving by presenting a ludicrously mismatched and incomplete one, where mock-books are placed alongside apples and teapots. Another work in the same medium, Déserteur de la Légion (Deserter from the Legion, 1974), asks the beholder to create the eponymous character out of a series of disparate items, including a notebook, the drawing of a torso, a cardboard cutout and the crotch and upper leg of a pair of jeans: debris from which we must contrive a whole.

Baruchello’s videos also deal in fragments, inviting the beholder to choose the context. In Perforce (1968), a boy drags a drowned man out of the sea, to the mismatching sound of panpipes. Another, Quaranta Immagini (Forty Images, 1996), is more immediate: placards counting up the numbers one to 40 appear on screen, followed by photographs that alternatively show living men and mutilated corpses. Baruchello gives us no indication as to whether these are the perpetrators, the future victims or other individuals entirely. Is it a polemic against abuses or something else? Are we justified in making connections between successive images?

Verifica Incerta (Disperse Exclamatory Phase) (1964-5), a collaboration with the experimental director Alberto Grifi, would suggest that we are. A 30-minute compilation of scenes from different films, it distills genre cinema to scenes of passion, suspense and violence. As we slip from western to swords-and-sandals epic, the same tension remains. One feels simultaneously familiar with the landscape one occupies and lost within it. As elsewhere in Baruchello’s oeuvre and in Raven Row’s superb exhibition, this indeterminate space proves a thrilling place to be. 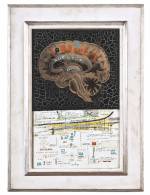