From storms thrashing lighthouses to mountaintops enveloped by cloud, from golden piazzas to the Italian Riviera, Turner’s delicate watercolours are stirring visions of the natural world 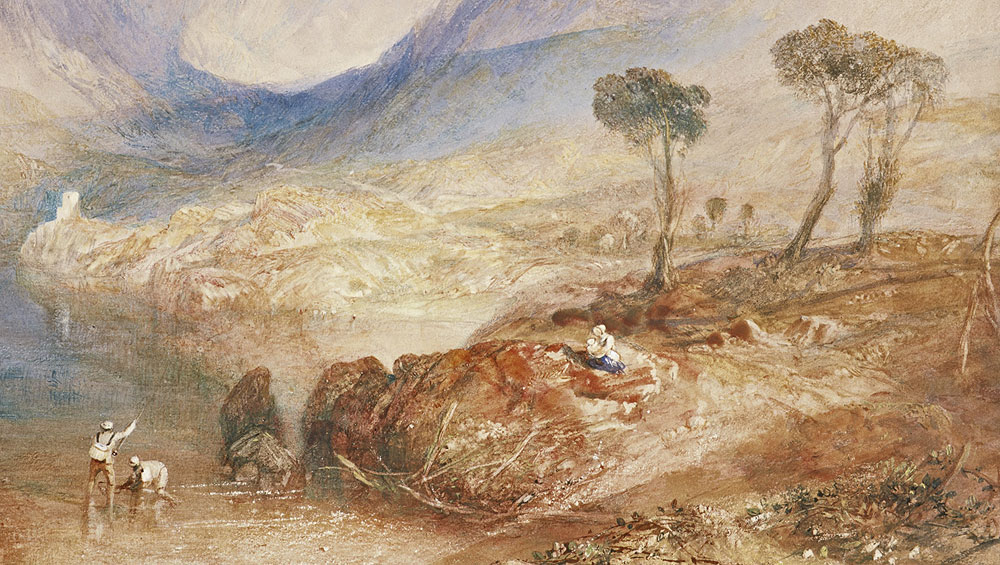 For more than 100 years, the Scottish National Gallery in Edinburgh has been showing a collection of watercolours by JMW Turner (1775-1851), bequeathed by his dedicated collector Henry Vaughan so that they may be accessible to the public indefinitely, “all at one time, free of charge, during the month of January”.

Spanning Turner’s long and distinguished career, these paintings provide atmospheric, delicate and stirring visions of the natural world in its varied states – from storms thrashing lighthouses to mountaintops enveloped by cloud, and from ethereal, golden piazzas to enigmatic perspectives of the Italian Riviera. Although tiny and requiring some concentration and time, these postcard-sized creations contain exquisite studies of landscapes that appear always in motion, always slightly beyond comprehension. They invite and inspire a sort of dreaminess in which the world is both vast and intimate, clear and impossible. There is a sense of freshness to be gained from meditating on these moments, captured more than a century ago, in which time did not stand still, but stirred, lingered, kept moving.

Most of these paintings were inspired by Turner’s travels within the British Isles and further afield in Europe – especially Rome and Venice. From the 1790s, he toured England, Wales and Scotland, making preparatory sketches for his watercolour and oil paintings, and exploring a variety of landscapes, from coastal scenes to mountaintops. A great admirer of the poetry, novels and histories of Sir Walter Scott (1771-1832), Turner collaborated with him on various projects and often stayed with him in his country house (Abbotsford, near Melrose), sketching the landscape around it.

One of these pictures, Rhymer’s Glen, Abbotsford (1831-32) an area of woodlands and waterfalls, was used to illustrate Scott’s Miscellaneous Prose Works (1834-36). Another more imaginative scene, Falls near the Source of the Jumna in the Himalayas, c1836), was based on a sketch by Lieutenant George Francis White and is one of seven Turner made after White’s sketches. They were engraved for White’s publication Views of India, chiefly among the Himalayan Mountains. 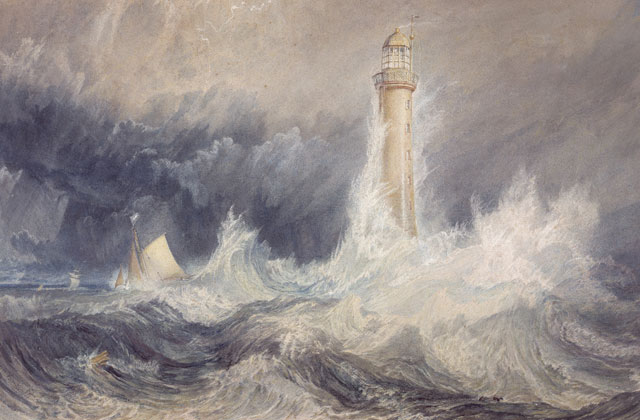 JMW Turner (1775-1851). Bell Rock Lighthouse,1819. Watercolour and gouache with scratching out on paper, 30.60 x 45.50 cm. Collection: National Galleries of Scotland. Purchased by Private Treaty Sale 1989 with the aid of funds from the National Heritage Memorial Fund and the Pilgrim Trust.

Some of Turner’s most powerful images are those in which he imagined the landscape itself. For Bell Rock Lighthouse (1819), for instance, its architect, the engineer Robert Stephenson, commissioned Turner to illustrate his Account of the Bell Rock Lighthouse, using Stephenson’s texts and another artist’s sketches as inspiration for a dark and dramatic vision of the new building surrounding by high waves and heavy skies. (I can confirm, having lived nearby for some time, as Turner would have as well, that this image is no less realistic for that.)

In 1802, Turner made his first trip to Europe, spending 15 years exploring the continent (as the Napoleonic wars played out in the background), from the Mosel River in Germany to the piazzas of Venice and Rome and the secluded bays of the Italian Riviera. The Venetian works are a particular highlight of the exhibition, revealing the intricate brilliance Turner achieved at his peak, in subtle, layered visions of the enchanting and intriguing city. In The Piazzetta, Venice (c1835), Turner presents the city, so enriched with its own Romantic reputation as well as its beautiful light, in a glorious, multilayered manner. Showing a vibrant summer storm in the centre of Venice, with its political and religious symbols and statues, he captures not only the intense and varied weather of the city, but also its rich and tumultuous political life.

This ability to include rather than transcend or contain the varied character of a place – capturing seemingly contradictory aspects, moods, histories and possibilities – is the key to Turner’s enduring relevance and power. Observing the magnitude and incomprehensibility of the world around him – whether the awe-inspiring terror of a storm or the impossible beauty of a cathedral in Venice – Turner was able to allow and submit to this sense of the sublime in his own work, thereby achieving a sense of serenity even in the midst of chaos.

Perhaps this is what is so intriguing about these tiny paintings – the fact that they take incredibly powerful scenes and phenomena and make peace with their power. They do not minimise them (other than in scale), but reach into their complexities and intricacies, reproducing these multitudes as faithfully as possible.

Why Vaughan insisted that his collection of Turner’s work be shown in January is unclear but, regardless of his personal intention, there is some sense that, in beginning a new year and in preparing for spring, we may learn from this serene attitude and vision. Regardless of the severity of the elements and the atmosphere, the moods and the natural drama in which we all live our lives, it is possible to take lingering moments simply to accept our continued but slight place in the wider world – one which is beautifully, excessively unclear, most of the time.