The first exhibition of 2014 at Turner Contemporary brings big canvases, bright colours and a return to nature, but with a fresh outlook. JMW Turner (1775-1851) and Helen Frankenthaler (1928-2011) were both artists who can be understood through their fascination and experimentation with paint, resulting in a complex understanding of the medium.

The exhibition shows the development of the painters, both of whom expressed the landscape through representational and abstract techniques. As a preface to viewing the exhibition, curator James Hamilton asks the visitor to “throw off the burden of art history” and consider the focus of the title, Making Painting.

Frankenthaler was part of the Abstract Expressionist movement, working in New York in the company of artists such as Jackson Pollock, Kenneth Noland and Robert Motherwell. Her large-scale, bold and colourful abstract works could not seem further from the pale, stormy and subtle paintings by Turner, who was working within the landscape painting tradition almost a century earlier, but the two artists share a connection in their attraction to landscape and nature.

Frankenthaler was inspired by the places she went to, travelling within America and visiting Europe in the 1950s. She did not work directly from the landscape, but used a language of abstract brushstrokes to express forms and shapes from memory. The exhibition catalogue reveals that Lorelei (1956) was inspired by a boat trip she took down the Rhine and Hotel Cro-Magnon (1958) was the name of a hotel she stayed in near Lascaux. In Lascaux, Frankenthaler had visited nearby cave paintings and in the painting Hotel Cro-Magnon, a thin black arabesque can be seen among blue and reds. The consistency of black darkens and thins, like the traditional Chinese ink and brush technique. In Dawn after the Storm (1957), a graffiti of circles, crosses and dots surface where nature is translated into an abstract language. A characteristic of Frankenthaler’s work is the halo of oil that seeps into the canvas from areas of block paint. Hamilton tells me that Frankenthaler allowed this halo to develop and learned to predict the shapes that would emerge from the paint. In Seascape with Dunes (1962), prominent halos of oil spread around the blocks of colours that lie like islands, “floating” in the centre of the canvas.

Turner also used abstract techniques to achieve textured effects; he used brush-ends and fingernails to sculpt the tacky acrylic or dilution of water and wash into his watercolours to add ambiguity and seasonal weather effects. Hamilton describes how one of Turner’s works, On the Sea Shore (1830), was in a previous life a piece of scrap paper. Turner used rough paper as a starting point for many of his works in which “gems” of colour in the form of spattered paint became part of the composition; a precursor perhaps to Pollock. In The Evening Star (1830), a splodge of paint reflects down on to the water, a deliberated dash of white, or perhaps an abstract expression of the landscape. Documenting his impressions of changing atmosphere and scenery, Turner travelled across the UK as well as to the Alps in his early life. The colour blue is familiar to Turner, resembling sky and sea, and was also a popular colour choice of Frankenthaler. Turner’s watercolour Sidmouth (1825) shows sculpted waves and articulated currents ranging in colour from dark navy to white. In Grey Sea, Boat Running Ashore (1845-50) dull blues and whites are layered and textured by the brush to create depth of waves. It is easy to make comparisons with two of Frankenthaler’s works where the colour blue dominates – Untitled (1960-61) and Barometer (1992). In Untitled, Frankenthaler replaces paper with canvas, and the surface is less absorbent; the turquoise paint pools before soaking. A crackled area of dried foam resembles the froth of a wave. It is a different effect from Barometer, where acrylic on canvas forms a thick wall of smooth, hardened paint. Colours grade upwards from a seeping of inky blue to a bumpy whitewashed wall.

Turner saw himself as a member of a canon of traditional landscape painters where, to an extent, a conventional formula was followed for art historical classification. Although Frankenthaler did not work to these rules, our eye is not discriminative to her abstract land. Composition is placed before colour in our recognition, like an Andy Warhol silk screen where the colours of a pop art world displace our reality. Frankenthaler’s work Overture (1992) is a deep green canvas in which horizontal lines and the presence of depth allows us to consider the work as a landscape. Speckled paint in the foreground forms yellow and white raked shingle, similar to the winter crunch of sand on Margate beach. In Winter Map (1965), the thinning of colour is used as a technique to reveal the canvas beneath, creating the effect of a beach; an infiltration of yellow suggesting the natural occurrence of sand meeting land and then sea. On a closer look, Frankenthaler’s works are perhaps more representational than originally perceived.

Visually digesting the works in the exhibition can be about reflecting our world on them. Determined to see a landscape, looking at the vertical painting Hansel & Gretel (1975), I tilt my head and a landscape emerges. Reduced to my early artistic instincts, I am satisfied to discover a yellow horizon of sun, a stretch of blue sea and an expanse of solid green land in the foreground. Towards the end of Turner’s career, he began to experiment with atmospheres and moods, moving away from the physical properties of landscape, his works becoming skyscapes and cloudscapes. Trematon Castle, Cornwall (1828) is formed by layers of colour; shapes are ambiguous and with a tilt of the frame, the creamy sky could become sand. Frankenthaler worked on her canvases flat on the ground, circulating the image with a bird’s-eye view. In video footage shown in the gallery, she questions an assistant about a painting displayed on the wall: “Was that vertical or horizontal when we looked at it? What was the top is now the bottom.” Frankenthaler’s horizon was not limited by a conventional point of perspective determined by the landscape painters who traditionally worked en plein air, standing upright with an easel. This exhibition presents a fresh challenge to our perception through the works of two artists who questioned the conventions of landscape and the definitions of abstraction. 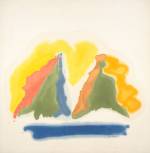