Studio International visited the Dulwich Picture Gallery to view the Finnish artist Tove Jansson’s first retrospective exhibition in the UK. She is well-known as the creator of the Moomins, but as this major retrospective makes clear, Jansson’s work encompasses many creative disciplines 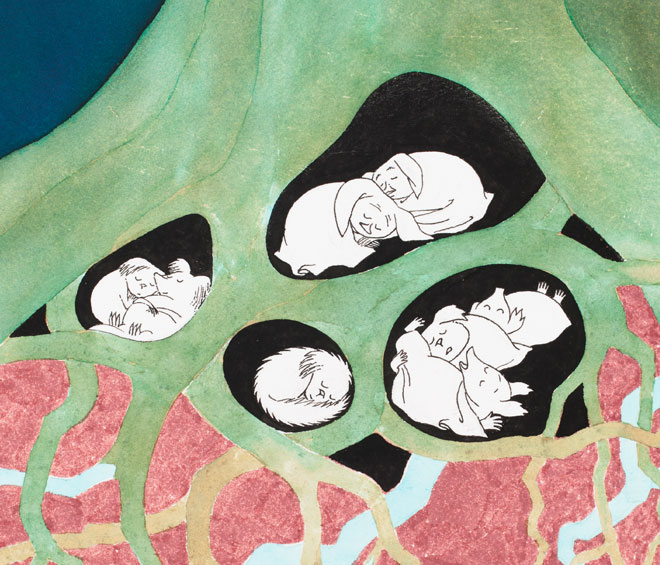 The Dulwich Picture gallery usually hands out a two-page press pack at exhibition openings, but reviewers arriving at the Tove Jansson retrospective received a Moomin tote bag full of Moomin merchandise – cards, a tea towel and a mug. This is the Finnish artist’s first major exhibition in London and, although the goody bag does represent one aspect of Jansson’s practice with which many are familiar, there is more to her work than the curious, captivating Moomin world she created in stories (1940s-70s) and newspaper comic strips (1950s-60s). 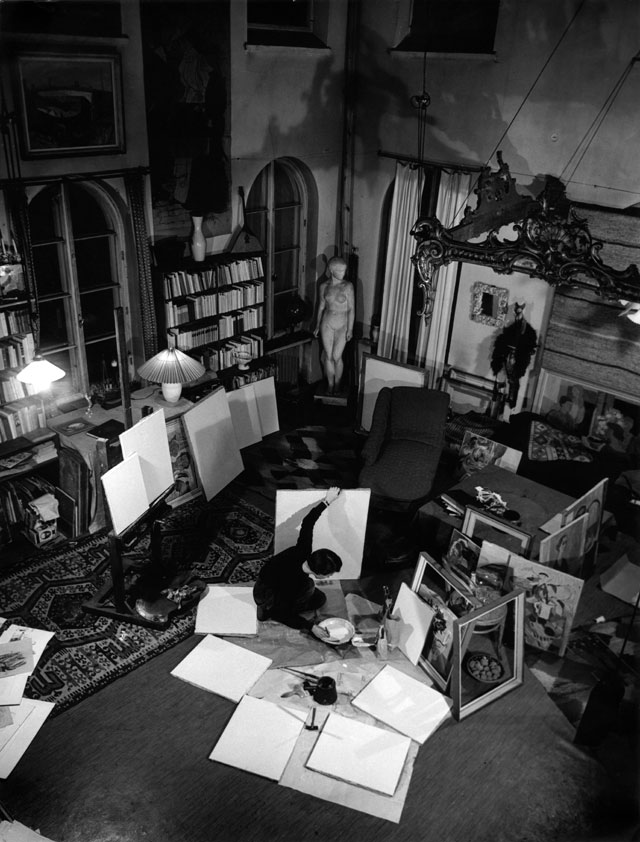 Tove Jansson in her studio. © Per Olov Jansson.

A brief visit to the gallery shop reveals more Moomin merchandise and, extraordinarily, around a dozen books for adults, written by Jansson between 1968 (Sculptor’s Daughter) and 1998 (A Winter Book). Onthe latter, Jansson’s lastcollection of short stories, Philip Pullman has written an entrancing accolade. He tells us that Jansson’s stories are “as smooth and odd and beautiful as sea-worn driftwood, as full of light and air and wind as the Nordic summer”.

The diversity and extent of Jansson’s production is remarkable. “If we put all her work here, it would be overwhelming,” Jansson’s niece Sophia Jansson told us as she led us around the exhibition, yet she conceded that she was disappointed that they could not include one of Jansson’s murals in this exhibition. Jansson made a number of wall paintings, including two, Party in the City and Party in the Countryside, which she was commissioned to do in 1947 for Helsinki City Hall and which are now at the Helsinki Art Museum.

Jansson was born in 1914. Her mother, Signe Hammarsten-Jansson, was a Swedish graphic artist, and her father, Viktor Jansson, was a Finnish sculptor. Jansson’s mother taught Tove and her siblings to read English because, as Sophia explained: “English books were cheap, not many people wanted to read English in Finland, and aunt’s family didn’t have much money.” As a result, Jansson grew up reading AA Milne and Kenneth Grahame, both of whose books were illustrated by EH Shepard, and many of Shepard’s characters, from the stories of Winnie the Pooh and The Wind in the Willows (a favourite of Jansson’s), are populated with anthropomorphic animals.

It is not so far fetched to think of Jansson reading these stories as a small child and watching the sorrowful Eeyore and the spirited Piglet in their antics with Pooh bear, and for those characters to spark ideas in her young creative mind. Perhaps Shepard’s drawings did influence the creation of some of Jansson’s Moomin creatures, but, if so, she mixed those gentle whimsical countryside influences with the strange eerie tales of the Swedish children’s book writer and illustrator Elsa Beskow and the dark myths and monsters of Nordic legends. Running with all these threads, Jansson built for herself a universe touching on surrealism – still referencing something childlike yet never childish, but far away from the places of Shepard, Milne or Grahame’s imaginations.

The first room in Dulwich Picture Gallery’s retrospective shows us more of the lesser-known aspects of Jansson’s creative practice, with richly coloured oil paintings, portraits and landscapes. There are touches of the Norwegian painter Edvard Munch in the colouring and mood of Jansson’s Midwinter Wolves and Mysterious Landscape (both 1930s). And in her Landscape (Picnic) (also from the 30s) we see reflections of George Seurat’s A Sunday on La Grande Jatte (1884) and Édouard Manet’s The Luncheon on the Grass (1863), as Jansson positions her figures seated on the ground and promenading across a landscape. But this is not a pastoral Parisian space; Jansson’s ground is coloured with reds, ochres, yellows and blues, and her trees, oddly shaped, create a strange, wide-open space that borrows more from the early-20th-century Danish Illustrator Kay Rasmus Nielsen, with his expanses of sky and magical places.

Through the 30s and 40s, Jansson painted portraits in oils, confidently executed and composed. In her Woman (self-portrait) (1942), she plays with perspective: we look down at her surroundings but, somehow, she manages a visual shift and appears almost to be looking down at us. Standing with her hands on her hips, she stares at us, her audience, defiantly watching us, keeping us in our place and herself at an equal level. The ability to reshape space in this way takes great skill and visual awareness. Again, there are echoes of various European painters in Jansson’s portraits – Paul Gauguin in the positioning, colouring and shaping of her Maya (1938), and Henri Matisse, Raoul Dufy and Munch again in the composition, colouring and huddled figures in the landscape seen from the window of Jansson’s Blue Hyacinth (1939). The breadth of influence on Jansson – from western and eastern European illustration and storytelling, through European impressionism, pointillism and fauvism – no doubt had much to do with the fact that her parents, both being artists, surrounded her from her earliest years with many and various examples of art. 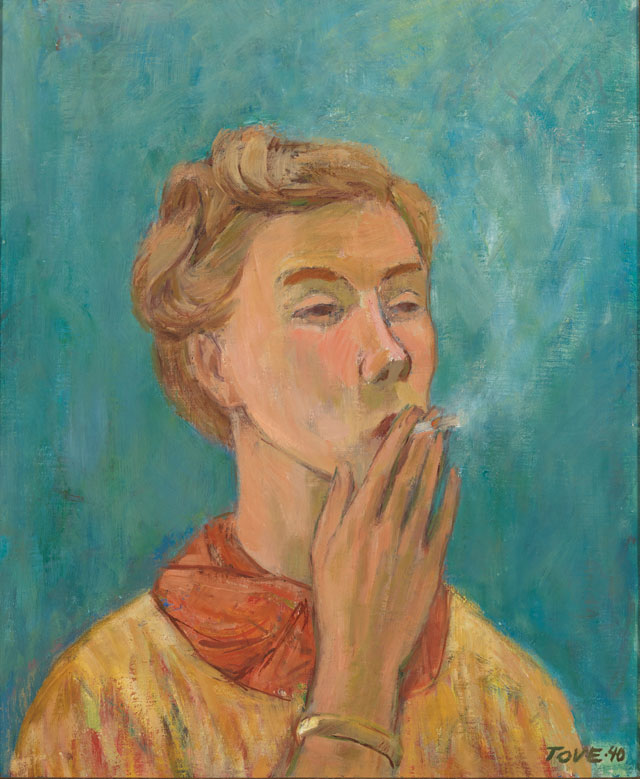 In fact, as her niece Sophia explained, her aunt was taught to draw at her mother’s knee. And there, on page seven of the exhibition catalogue, we see Jansson as a blond-haired child, entranced by the magic that her mother’s hand is shaping on paper, right before her eyes. The critic and writer Jean Fisher describes such an experience in her 2003 text On Drawing, in the seminal book The Stage of Drawing: Gesture and Art, a collaborative thesis and conversation around drawing between the artist Avis Newman and the writer and curator Catherine de Zegher. Fisher begins: “Enraptured by the miraculous conjuring of images from thin air, I had early on succumbed to the lure of drawing and that curious abandonment to the power of the infinite that tempts the drawer to withdraw from the world and map herself into a scenography of a different order.”

Beginning so young and surrounded with so much creativity, it is no wonder, then, that Jansson developed such fluency in drawing, and an aptitude to map herself into a scenography of a very different order. Learning to draw at her mother’s knee gave her the ability to render the observed and to conjure the imagined as fluently and naturally as breathing. And it is this skill that threads through and connects all of her various works – even the novels and short stories for adults, because, in as much as drawing can be a process of seeing and understanding how things are made, it can also allow the practitioner to realise the relationship between things, and this can inform all manner of creative practice.

Yet, despite the creative encouragement of Jansson’s domestic environment, home was not always as idyllic as might be expected. In her painting titled Family (1942), she stands between her Swedish pacifist mother and her Finnish father, who supported the Germans in the second world war, while her two brothers, seated in front of her, play chess; one brother wears a soldier’s uniform, and the other (much younger) brother looks sadly at the chess pieces, as if wishing this war game would go away. In her time, Jansson received ungenerous criticism for the stories her paintings told. “They said her paintings were too illustrative, too narrative,” Sophia told us. Perhaps it was simply an unfortunate slip of fate that Jansson lived at a time when many critics had a narrow view of the arts, and were quick to denounce all things narrative as being of less value than those things, often inaccessible to many, abstracted, expressed or brutalised. Undoubtedly, I have a bias – but art and its reception has changed markedly over recent decades and contemporary perspective takes a broader view, one in which Raymond Pettibon’s graphic drawings and texts will cover a wall in a white-cube space and Emma Talbot will merge her graphic frames with storyboard imagery and painting genres, and both will be celebrated across disciplines. 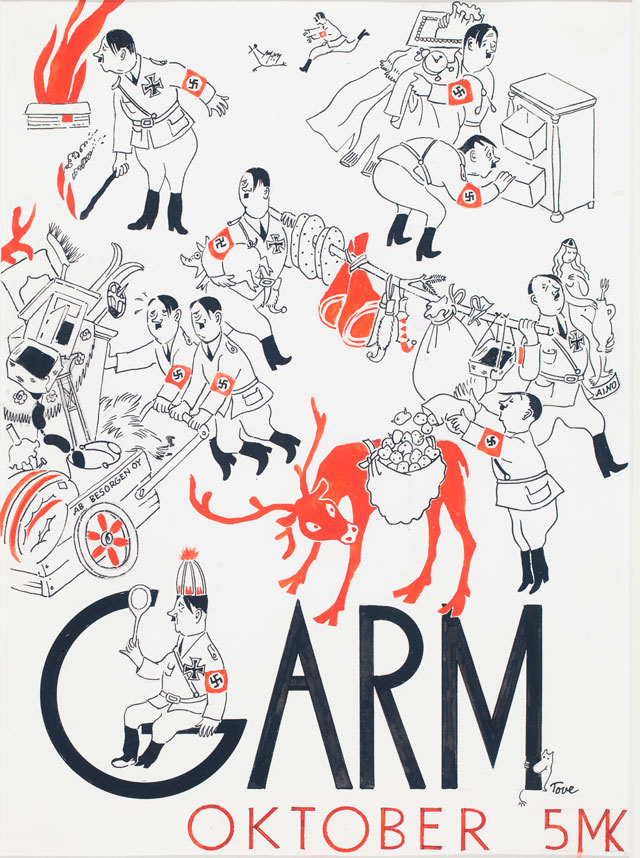 There are more marvellous examples in this exhibition of Jansson’s early drawings made (before her Moomin stories) during the second world war for the Swedish-language political journalGarm, which her mother also drew for. On the cover of the October 1944 issue of Garm, Jansson’s fluent line is crystal clear: Hitler is stealing everything he can get his hands on, even requisitioning a reindeer to carry his booty. And here, peeking at us from behind the letter M of the Garm title, we see a small, long-nosed creature beside the signature “Tove”. A totem, daemon or protective sprite, this little being is the forerunner of the first Moomin character.

Additional beautifully realised and elegant illustrations for other writers’ stories (Lewis Carroll’s Alice’s Adventures in Wonderland and JRR Tolkien’s The Hobbit), are hung alongside many Moomin drawings in this exhibition, with some sketches and working sheets, that wonderfully reveal how Jansson thought through an idea and arrived at her visual imagery. 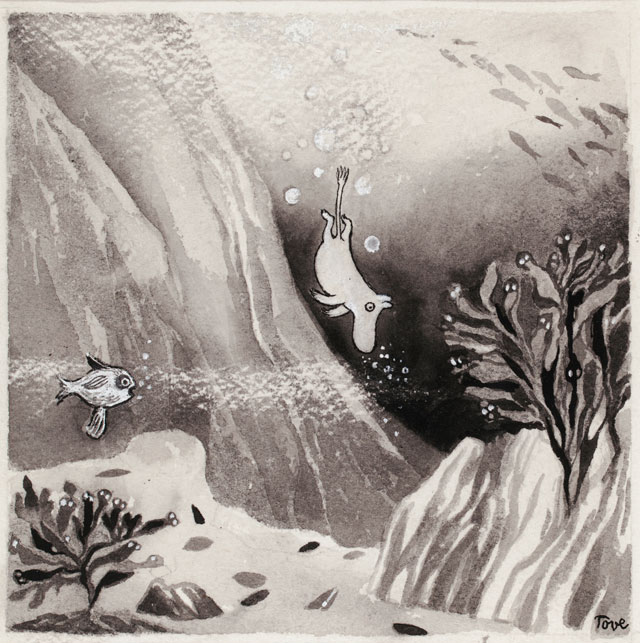 Paul Gravett, an expert in comics, tells us in his contribution to the catalogue that the Moomin “newspaper strips were largely forgotten for decades”. Gravett made photocopies of the series, which were then copied and circulated by fans worldwide. Chris Oliveros, the Canadian founder of Drawn & Quarterly, saw the copies and began a deluxe reprint in 2006. Now, belatedly, says Gravett, Jansson’s comic strips “are being enjoyed and recognised as a high point in her creative output … immediate, abundant and [full of] visual surprise”.

There is so much more to see in this exhibition: Jansson has given us a universe full of enchanting, odd creatures in marvellously wild, peculiar worlds. “The strangeness of the Moomin books is the strangeness of life itself,” the novelist and screenwriter Frank Cottrell-Boyce writes his catalogue text. As a young boy, Cottrell-Boyce “frightened that [he] might find a skeleton or stand on an unexploded bomb”, braved his way across a bombed-out street in Liverpool, enticed to the library by Jansson’s “willingness to ransack her own heart and history and turn it into stories”. Indeed, Sophia featured as a character in her aunt’s 1972 novel The Summer Book. “She writes herself in, paints herself into her work, and includes everything that happened to her,” Sophia told us. “She was very present, she was very engaging.”

Jansson will always be present and engaging in her work, and she will continue to show us how to be courageous; go and see this exhibition, in our current unsettled times we need to remember to “ransack [our own] hearts”. 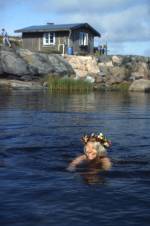