This thorough exhibition explores parallels in the lives and works of Vincent Van Gogh and Edvard Munch, two artists whose lives were plagued by anguish, but whose works are loved for their colour and humanity

“During his short life, Van Gogh did not allow his flame to go out. Fire and embers were his brushes during the few years of his life, whilst he burned out for his art.” –Munch, 1933

From 1900 onwards, works by Edvard Munch (1863-1944) and Vincent van Gogh (1853-90) were increasingly shown together. An exhibition in Cologne in 1912 heralded the two artists as the fathers of modern art. Despite being in Paris around the same time and frequenting many of the same places, it is not thought that Munch and Van Gogh ever met. Their lives and works, however, display uncanny parallels, both setting out to be painters in 1880 and both struggling with and injuring themselves during periods of depression and mental ill health. This thorough exhibition put together by the Van Gogh Museum in Amsterdam and the Munch Museum in Oslo is the first to explore these overlapping trajectories in any depth.

The exhibition opens with a self-portrait by each artist. Van Gogh’s Self-Portrait as a Painter (1887-88) is almost pointillist in style, with thick strokes and vivid colour. Munch, on the other hand, in Self-Portrait with Palette (1926), uses much thinner paint and allows patches of canvas to show through. Both artists portray themselves with the tools of their trade and a heavy frown. Throughout the exhibition, the key current is one of emotions and expression, with each artist taking a rollercoaster ride through life, exploring new techniques for sharing these experiences with the world. We see them develop in terms of freedom of style and choice of colours, from their early paintings, such as Van Gogh’s caricature-like The Potato Eaters (1885) and Munch’s impressionist Morning (1884), through depictions of trees, sunsets, starry nights, wheat fields and couples promenading. Intimate renderings of their bedrooms draw the main comparison to a close, before a final “symphony”,1 intended to create an impression of each artist’s most significant series of works, through short slide shows and reproductions: Van Gogh’s Décoration (August-October 1888) and Munch’s Frieze of Life (1893-1944).

Many now iconic works by each artist are included: The Sower (1888), Starry Night over the Rhône (1888), The Yellow House (‘The Street’) (1888), Sunflowers (1889), The Scream (1893) and Madonna (1895-97). Of course, it is a pleasure to see these old friends once again, particularly in the flesh, as one forgets, with the many reproductions on greetings cards and tote bags, just how thick, textured and lavish Van Gogh’s brush marks are, and what a joy it is to stand before his canvases and be swept away with the swirling strokes. His marks are as prolific as his output – confined within a 10-year period – and there is a sense of necessity and urgency in this flurry of speed. His anxiety comes to the fore, but his output is beautiful and never apparently tortured. He writes, in a letter to his brother Theo (5-6 September 1889), included in a section of printed materials in the exhibition, of the comfort his work brings him: “… what I hope for once I set myself to having some hope, it’s that the family will be for you what nature is for me […] to console you and restore you when one needs it.”

Munch’s work, on the other hand, reflects his depression. The eyes of his subjects are often just dark circles or smudges, gazing emptily into nothingness. “I saw all the people behind their masks – I saw through them and there was suffering,” reads a quote from the artist scrawled large across the atrium wall. His paintings are flatter than Van Gogh’s, but, despite the melancholy – even in the painting bearing this very title (1900-01) – the colours remain bright and vivacious: reds and yellows, perhaps amplifying the artist’s sense of isolation in a busy, cheerful world. His subjects are less the people depicted than the intense emotions they illustrate: jealousy, possession, sadness and despair. Many of his works are eerie and unsettling, set in a slightly surreal, symbol-filled dream world. Nightscapes with floods of moonlight on the water, isolated couples: a vampire wouldn’t be out of place – and, indeed, one painting (1893) bears that name, albeit latterly given, as an interpretation of the locked embrace the artist himself called Love and Pain. Even his renderings of kissing couples seem somehow sinister, and many of his faces bear frowns or deeply furrowed brows. In Kissing Couples in the Park (The Linde Frieze) (1904) and Red Virginia Creeper (1898-1900), faces at the very front of the composition disappear from view, but not into the distance, rather towards the viewer, into his space, intruding, oppressive, with a sense of closing in. “A bird of prey has taken abode inside of me – [it has sunk] its claws into my heart. With its beak it has carved a hole in my breast and its wing-beats have obscured my reason,” writes Munch in an illustrated text of 1913-15. This sense of possession, obsession and – almost – irrationality pervades the greater part of his work on display.

Of course there is The Scream (1893) – one of a series of four painted and pastel variations on this composition made between 1893-1910 – which is known to all, but next to it hangs The Bridge at Trinquetaille (1888), which one could be forgiven for believing to be a study in this series, but which, in fact, is by Van Gogh and completely unrelated. Other such striking comparisons are drawn between Van Gogh’s Starry Night over the Rhône (1888) – my absolute favourite in the exhibition, showing a couple out for a stroll, insignificant beneath a majestic sky – and Munch’s Starry Night (1922-24) and both artists’ repeated use of trees to create verticals – and horizontals – to break up their compositions. The pair also have works included where they zoom in on their natural subject – be it waves or wheat or a grove of olive trees – to almost abstract what they see, creating rhythmic, stylised patterns.

While both painters’ lives were filled with anguish, their paintings remain somehow appealing and accessible to the masses, not just because of the bright colours and often simplified compositions, but because of the depth of feeling and sincere humanity that emanate from their canvases, speaking to viewers across time and place. In another illustrated text (c1900), Munch describes human fates as being “like planets. Like a star that emerges from the dark – and meets another star – shines for a second before disappearing again into the dark …” Neither his star, nor Van Gogh’s, are set to disappear any time soon. This exhibition, with its dual journey, highlighting those incorporeal meeting points, sets out compelling evidence why not.

Reference
1. Both artists described their series as symphonies, hoping that their works, when hung together, would enhance and illuminate one another. 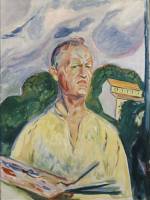 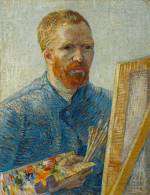 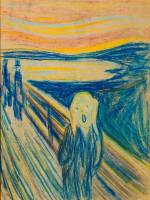 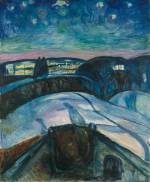