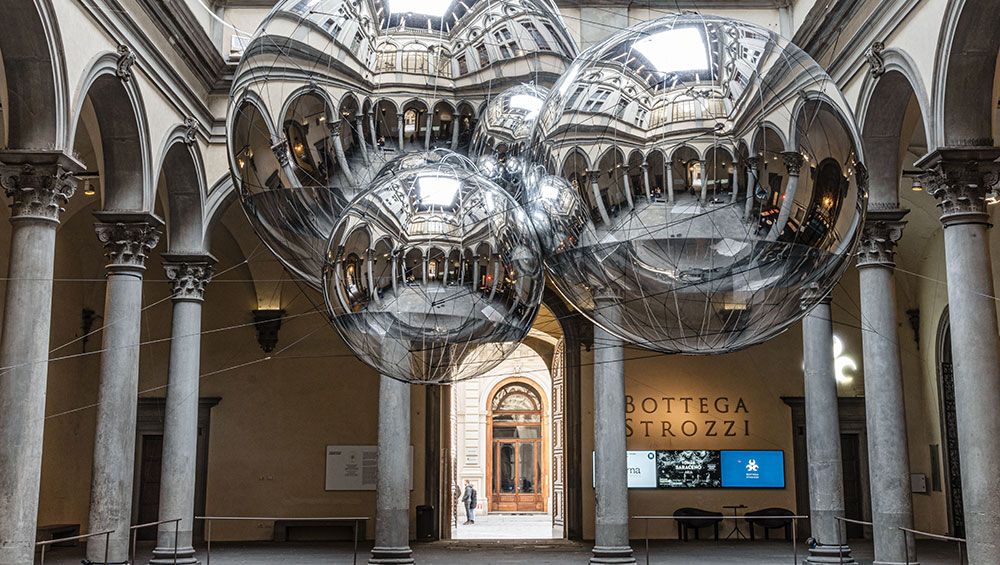 Palazzo Strozzi, Florence
22 February – 19 July 2020
(Please note that due to the nationwide lockdown imposed by the Italian government because of the Coronavirus, this exhibition is temporarily closed until 3 April)

The artist’s ability to dream, to imagine the world differently, has arguably never been more important to our species or our planet than now. The work of the Berlin-based artist Tomás Saraceno (b1973, Argentina) has long delved into alternative realities that seek to harmonise with – rather than plunder – nature, from investigating airborne travel powered only by thermal currents, wind or solar energy to what we can learn from how the humble spider navigates and creates its environment.

Popular culture is saturated with dystopian visions of humanity’s potentially bleak and blasted future. But Saraceno doesn’t do dystopian. In the 00s, he set up his Aerocene Foundation in opposition to this prevailing version of the Anthropocene, sparking a network of curious creative collaborators across the globe who have joined him in a vision of alternative vessels for travel, and even habitation, that could float around the globe, free from borders and without the use of fossil fuels. This is more than just pie-in-the-sky fantasy: he has already set six world records – including for altitude, distance and duration – with his fully solar-powered hot air balloon.

A glittering cluster of Saraceno’s imaginary travelling vessels greets us in the courtyard of Palazzo Strozzi, an imposing rusticated stone palace and a major Renaissance landmark in the heart of Florence; it has recently been enjoying a renaissance of its own, as the city’s first major space for contemporary art, under the director and curator Dr Arturo Galansino.

Thermodynamic Constellation (2020) is a collection of transparent and metallised Mylar globes, suspended in a fine web. Highly Instagrammable, they are more than pretty baubles: they are “prototypes for aerosolar sculptures”, according to the artist’s description. “Floating airborne, without carbon emissions, these aerosolar journeys speculate about what kinds of nomadic socio-political structures might emerge if we could navigate the rivers of the atmosphere, reconsidering the ways in which borders are set up by humans, the power of national institutions to decide who can transit, policies that dramatically affect vulnerable subjects, humans and non-human life forms.” Saraceno invites us to imagine what it might be like to become  “airnomads”, transitioning “from Homo Economicus to Homo Flotantis”. There is much of this beautifully articulated, romantic and speculative language throughout the show. But is the rhetoric more powerful than the art?

In this case, it provokes (in me, at least), a combination of wonder and scepticism, all too aware that we are such a long, long way, from making any of this feasible, let alone establishing whether it is desirable, given the logistical challenges of how we would breathe, cultivate, create and eat in such floating cities. Never mind the impossibility of navigating the political and economic systems of 21st- century capitalism, when “airspace is as regulated and militarised as on the ground”, as Saraceno states elsewhere. But maybe that mixture of curiosity and cynicism is exactly what he intended.

They certainly make for delightful and compelling sculptures, capturing the ornate embellishments and solid walls of the palace courtyard and reflecting them back in the curves of these graceful, ballooning forms. There are more along these lines inside the palace, starting with the first exhibition gallery. Connectome is the title for this room’s inhabitants: geometric structures evoking the Weaire-Phelan geometries (which apparently offer a close simulation of how soap bubbles cluster), they are made of thin, reflective panels and attached to ceiling, walls and floor by dense webs of dark thread that seem to extend and elaborate on the geometries of the “bubbles” themselves and the room (and world) around them; it is a multilayered and spatially rich experience, even before you learn that, with this interior landscape, Saraceno is echoing the map of neural connections in the brain.

For Saraceno, the visual and intellectual leaps between the micro and the macro are pivotal - as we learn when we move into the second gallery and enter the world of spiders. Other artists have given us spiders to remember – Louise Bourgeois’ blackened, spidery grotesques, most notably – but Saraceno wants to reveal them to us as genuinely miraculous creators in their own right.

I am ushered into a pitch-dark room and stumble over a bench placed low down in front of five long strands of spider filament, which drift horizontally, fanned by the gentlest of artificial breezes, their soft undulations spotlit by several floor lamps, while real-time video captures the choreography of these “strings” and translates them into sonic frequencies and patterns. It is an utterly mesmerising experience. The filaments’ movements ripple, like slow-lapping waves, giving off a sound that is strangely like that of a didgeridoo. Saraceno describes this work, Sounding the Air (2020), as “a collective creation improvised by an ensemble of forces and bodies”. It is a tribute, in part, to the ways in which some spiders “balloon”, using “airborne dispersal to move between locations”. 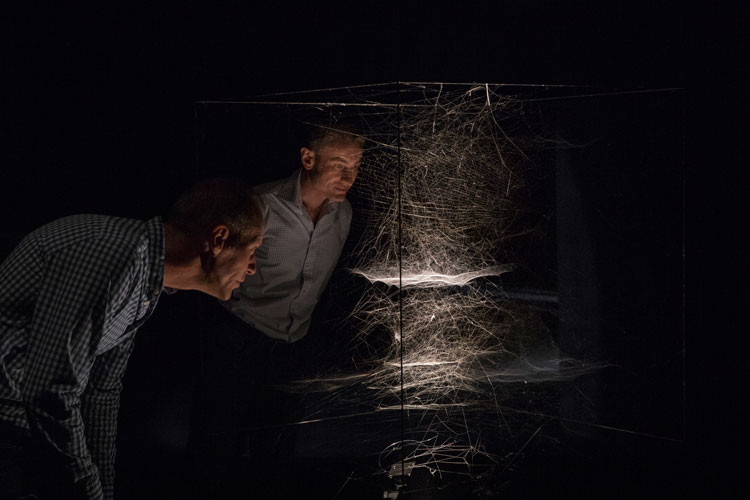 More arachnid achievements await us in the third gallery, titled Webs of At-tent(s)ion, where five glass cases contain spiders’ webs, their delicate threads and extraordinary, gossamer structures powerfully lit from below. There is something of the mystery and magic of cloud formations about the webs’ expertly orchestrated warp and weft as they tilt and curve, anchored only by their diamond-bright strands.

Galansino tells us that spiders are collaborative. They build webs on other spiders’ webs. They adapt and accommodate, repair and extend. These are, indeed, useful attributes for us to learn from, as he says. But the detailed exhibition notes are even more revealing of this room’s tribute to collective endeavour: specific spiders have been let loose in Saraceno’s spider sanctuary (factory?) in Berlin, for specific amounts of time, and then other spiders have been introduced, also for specific amounts of time. And some of their resulting webs have been turned sideways, the better to reveal the beauty of their structure. 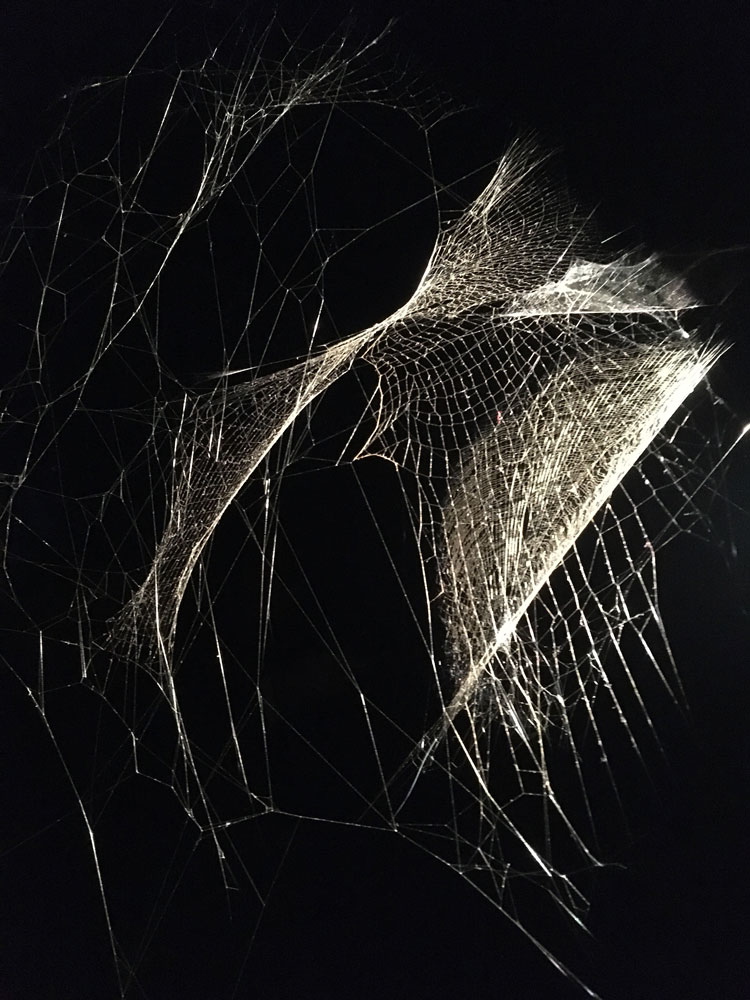 In the ensuing room, also pitch dark, it is just possible to make out a long, horizontal screen, which displays How to Entangle the Universe in a Spider/Web? What appear to be pulsating, endlessly forming and reforming red web-shaped structures are the result of Saraceno’s invented technology that allows him to 3D scan, digitise and reconstruct spider webs “The cosmic web is a vibrant superorganism,” Saraceno’s caption tells us, “its filamentary networks of assembling dark matter provide the mesh on which the large-scale of the universe is composed … The visual vibratory signals of the laser reveal the hidden architectural entanglements woven by the spider, while also imparting their own effects.” It reveals, he tells us, “how all three-dimensional space is made up of an infinity of planes. The universe stands before us between dimensions.”

The uncanny quality of this viewing experience is heightened by the soundtrack coming from the next room, an amplified sequence of plops and pings, apparently generated by dust motes landing on a spider web; I am not sure if this is the web that is in the room, also encased in non-reflective glass, its tiny and industrious maker still present – and just visible - within its creation. Across the back of this space a layered projection of a galaxy shimmers. We are told: “Located in the Mensa and Dorado constellations, this dwarf spiral galaxy can be seen at night in the southern celestial hemisphere. However, we see it with a delay of 163,000 years.” This pairing is entitled: Particulate Matter(s) Jam Session (2018). We are told that the structure of the web is identical to the structure of the galaxy, a fact mind-blowing enough without his caption informing us that this film also lasts 163,000 years, “the length of time needed for the light emitted by the large Magellanic Cloud to reach us”.

I emerge, reeling, into the yellowish light of his next installation, A Thermodynamic Imaginary (2020), another collection of reflective, balloon-like and geometric shapes, which he describes as “a model for a landscape that balances our relationship with, and harnesses the unlimited potential of, the sun”. At which point, my overexpanded mind rebels, seeking solace in the easier to understand attractions of the ensuing gallery, filled with translucent clusters of glass – like bubbles – which are presented as potential future floating habitats, with strangely arachnoid plants protruding from their circular apertures, plants that live on air. Flying Gardens, he calls this. To one side is a little room where you can have your arachnomancy cards read; Saraceno has developed a set of Arachnomancy, tarot-style cards for divining our future, with predictably ecologically attuned - and eminently sensible - prescriptions. 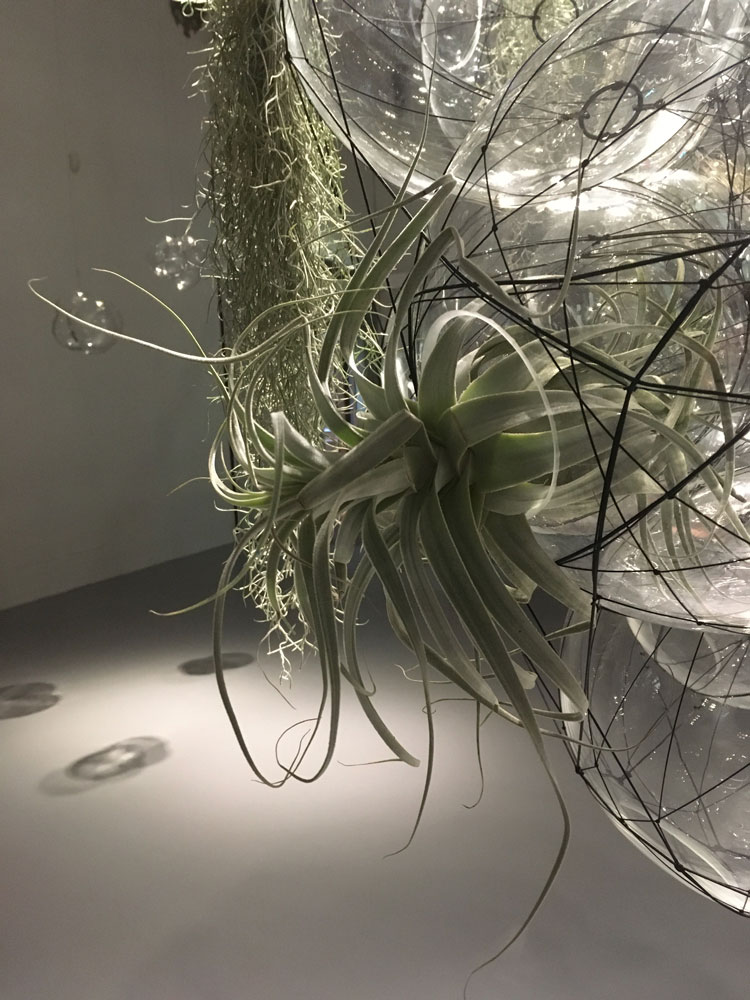 For an exhibition that deploys the qualities of light – the dramatic potentials of its presence or absence – so powerfully, there is a strangely bright, flat, and office-like quality to the final gallery, where Saraceno’s installation Aerographies “puts into perspective the different ways in which the movements of people, heat, animals and spider/webs affect and are affected by the air. Every gesture leaves a trace.” Here, spider webs are laid out on paper and framed around the room – “new spider maps of invisible cities”. Saraceno tells us: “Pens suspended from balloons act as utensils for the wind to draw its trajectories; filled with ink made from black carbon pollution from Mumbai’s air, these pens answer the question of what the air would write with – the material with which we have poisoned the air becomes a tool of its communication, reminding us of its ever-present agency even in the face of our destruction.”

Air, heat, currents, insects, plants, human traces: everything is connected. You leave the exhibition feeling that your mind has been quietly blown. The sight of those five spider-silk strands accompanied by the real-time, massively amplified sound of their gentle thrumming in the breeze will stay with me a long time; one of the most hypnotic and poetic experiences I can recall – more poetic for the fact that this is a natural phenomenon that is being revealed to us, not one of hand-skills and craft but spider skills, revealed by human ingenuity.

While enjoying my brief sojourn in Florence, I made a visit to the city’s impressive Galileo Museum, a celebration of 500 years of invention – most of it sponsored by this city and its wealthy patrons, and achieved by the brilliant minds they attracted, from Galileo to Da Vinci. It was really helpful to see the progression of extraordinary instruments aimed at advancing our understanding of our planet, the cosmos, of time, of navigation, and the complexities of the world around us. The final galleries where advances in both telescopy and microscopy were leading to huge leaps in understanding of the things closest to us and also furthest away resonated powerfully with Saraceno’s interest in what the microcosmic detail and intricacy of the spider’s web might tell us about the universe and how it is constructed and balanced. The art he has created in response is an invitation to us to understand and connect with this miracle – before it is too late. 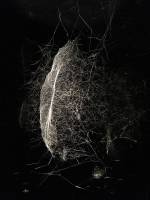 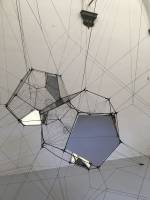 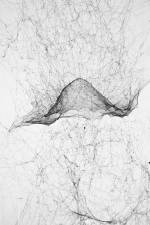 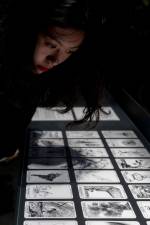