Toby Ziegler: The sudden longing to collapse 30 years of distance

Toby Ziegler: The sudden longing to collapse 30 years of distance

In a new series of large geometric works on paper and smaller figurative oil paintings on aluminium, Ziegler explores the relationships between memory and images 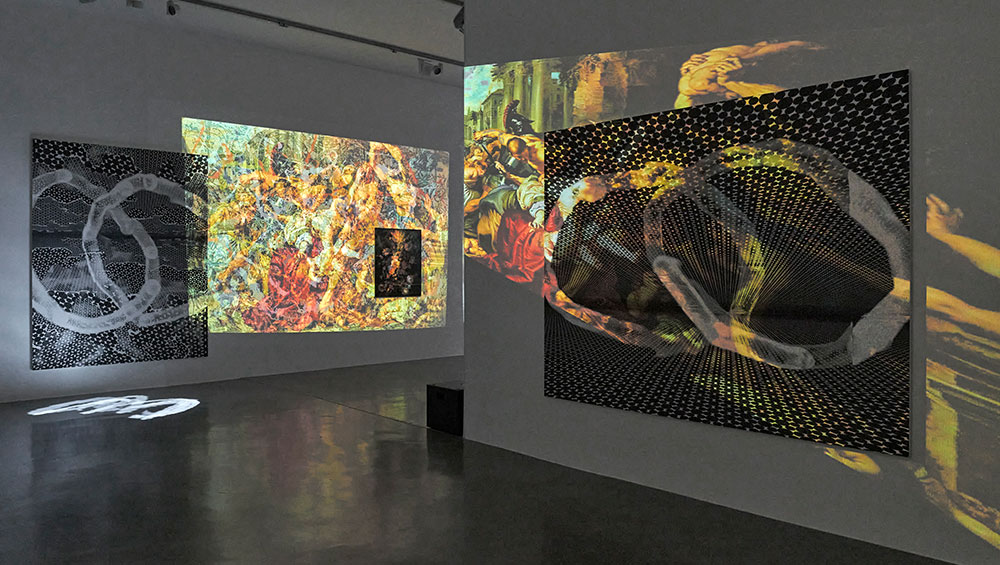 Fifteen years ago, Toby Ziegler lost some important digital files as a result of an unresponsive hard drive, a frustrating, but not uncommon experience in the modern world. The recent discovery and partial retrieval, albeit in a changed form, of these “ghost files” inspired a new series of work, exhibited here in Ziegler’s sixth show with Simon Lee Gallery. 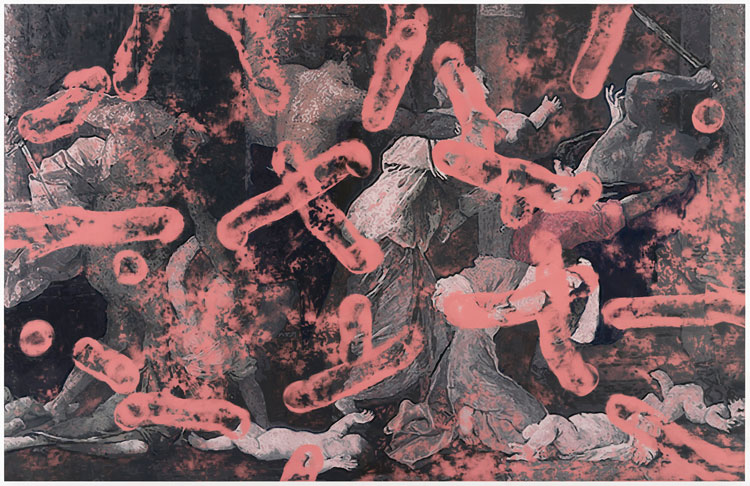 Reconciling his original ideas, which were digitally “lost”, with their new distorted form, through large geometric works on paper, Ziegler explores the ways in which we conceptualise past and present. He accommodates the idea of distortion, forgetting and reactivation, to create a sense of the “present” as a chaotic evolution of disappearance and reappearance, conception and destruction. Memory, he shows, is a process of abstraction. In these works, images disintegrate over time: they do not fully disappear, but transform into something less immediately recognisable, yet in their own way complete and real.

Elsewhere in the exhibition, the artist explores the relationship between image and data, memory and emptiness, through a clashing of figurative art and abstraction. In his smaller oil paintings on aluminium, particularly, Ziegler applies his ideas about the abstraction of memory, to a more general art historical context. Referring to works by Nicolas Poussin and Jan van Eyck, among others, and incorporating processes such as sanding down the surfaces of panels, and therefore removing parts of the original reproduced images, Ziegler mimics the process of time erasing memory. In this way, these oil paintings play with ideas of memory, history and time similarly to the initially accidental way that his “ghost files” appeared. 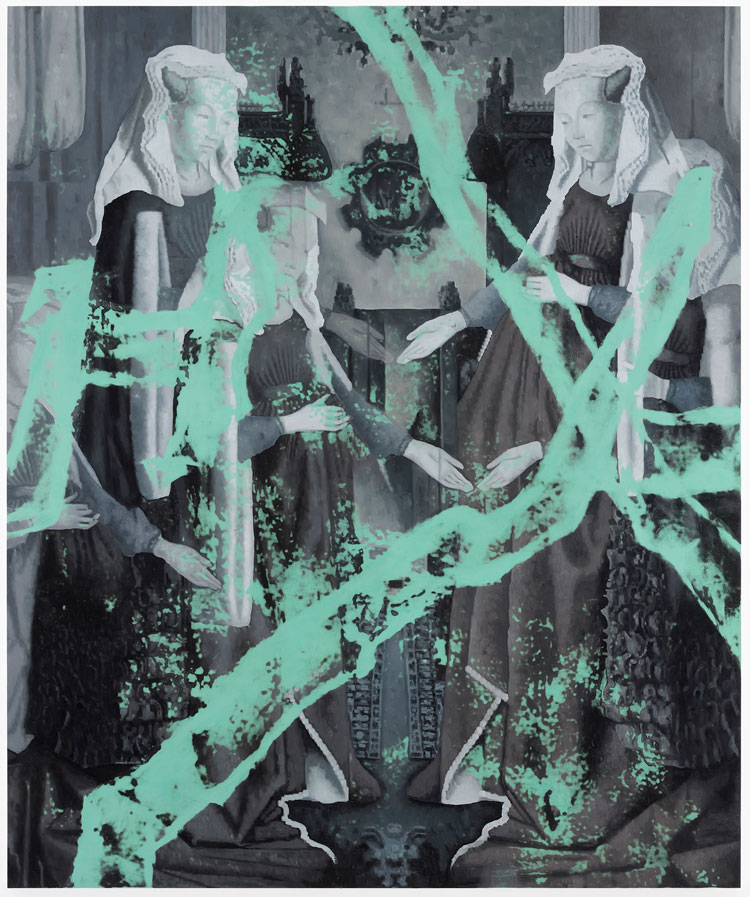 Interestingly, too, Ziegler’s treatment and repurposing of these figurative paintings as “erased” and distorted reveals just how intricate they are, and how time-consuming their production must have been. The essential fragility and vulnerability of paintings – particularly historical paintings – becomes a subject of reflection and, moreover, emblematic of the precarious status of all art and, in a way, all material things. By visually collapsing narrative and pictorial space in these sets of work, Ziegler forces us to confront our own weaknesses and even mortality; memory itself and history in a broader sense is clearly something constructed and perpetuated by mortals; it exists in our minds, which are as vulnerable to the ravages of time (perhaps more so) as these works of art.

Ziegler is clearly interested in the chaos and destruction implicit in the subjective and vulnerable nature of memory, and the intersection with digital technology. In his new video diptych, he applies his methods in painting to this form, taking sequences of images relating to historical forms of divination (such as tarot and geomancy) in one projection and feeding them into an online image search. The second projection shows the results of this, as an accelerating series of thousands of images that transform and merge with the original, accompanied by a soundtrack that veers from melody to white noise. 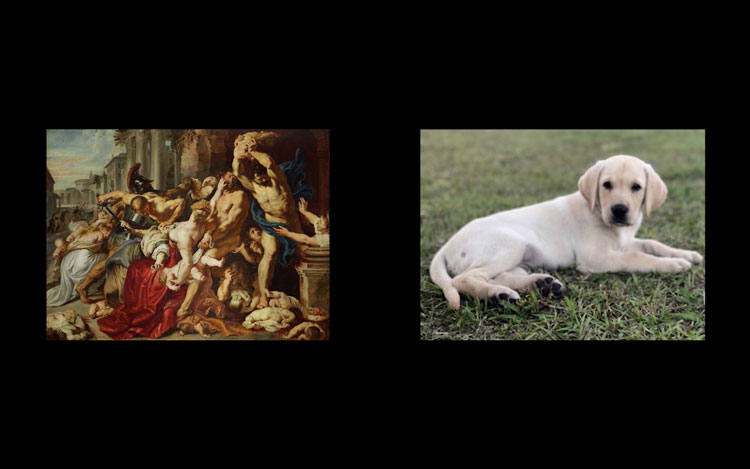 The idea of similarity and connection in images is explored with amusing, surreal results. Fairytale cottages are matched with an exploding sperm whale, for example. The connections seem senseless, but this is what Ziegler finds so fascinating: why do we even try to find patterns and deeper meanings in otherwise random arrangements? Why do we feel such a need to connect and make sense of what would appear to make no sense? What does technology tell us, ultimately, about our own patterns of cognition and psychological habits? About our desire for order and sense? Why do we have trouble with distortion, erasure, and chaos?

On the face of it, it seems clear: these states remind us of our own potential demise and disorientation. This show is a contemplation on mortality, of sorts. Not necessarily mortality in its clearest form – the death of the body – but in the everyday, perennial mortality of things, thoughts and connections, that is so clearly the fabric of life, as much as order, bonds and sense. 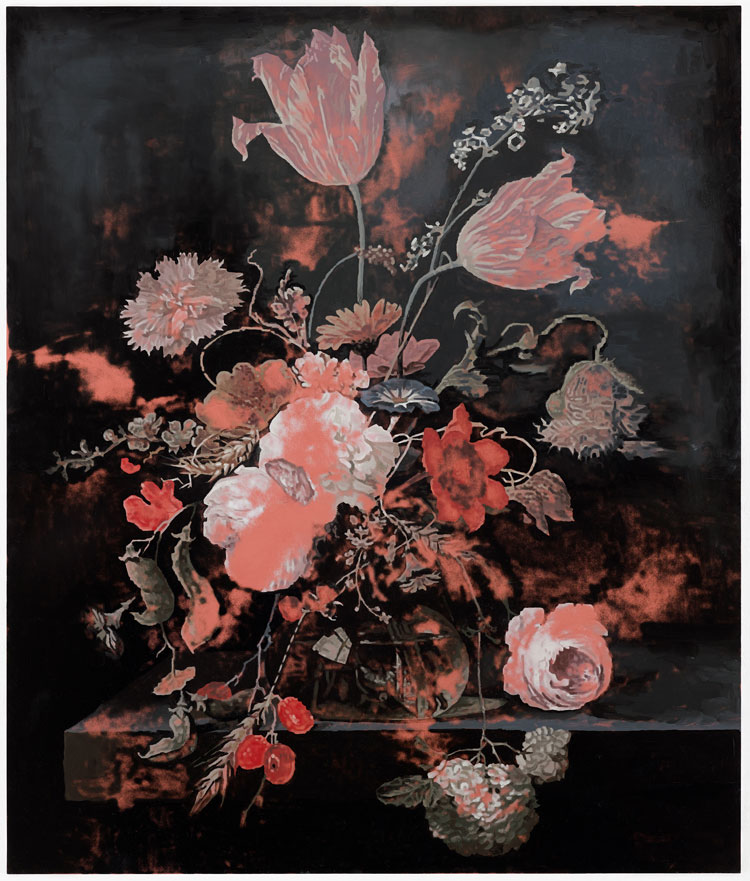 Ziegler approaches this existential crisis by exploring what it means for something to be abstract, and to be abstracted, as a way to understand, in a much broader sense, what we are often, subconsciously, afraid of. His small oil paintings are beautiful in their new, slightly distorted forms; a bouquet of red flowers seems to glow from its dark background, its beauty spilling out sublimely in this digital chaos. His “ghost files” emerge like organised galaxies of stars, webs of DNA: whatever they once were, they are mesmerising now, in this new form. If Ziegler’s art teaches us anything, it is that the new, chaotic, broken present is still beautiful, even as it changes and evolves and threatens to disappear – or perhaps especially because of that fleeting status. 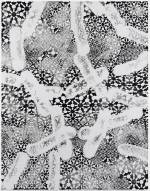