Hiroshi Sugimoto explores the origins of art in relation to science in this sensational and inventive exhibition at the Marugame Genichiro-Inokuma Museum of Contemporary Art in Japan. While this particular exhibition focuses on art as inspired and related to the History of Science, the next three exhibitions in Sugimoto’s ambitious “Origins of Art” programme explore art as linked to Architecture, History and Religion, which altogether will run for an entire year (each theme running for three months).

The running theme of the program is the nature of art as related to a wider history of the world – art as science, as history, and as religion. As Sugimoto points out: “We are in an age of uncertainty. In such a society we might as well look back to the past.” Here is a contemporary artist taking time to reflect on art in the wider scale of things, as well as documenting his own history of reference and past inspiration. Sugimoto shows recent and past work of his own, along with his personal collection of artifacts, which extend to fossils, 7th-century Buddhist statues, and even freeze-dried food designed for astronauts in space.

Sugimoto refers to his work here as a “time-machine”; in the first exhibition, one experiences travelling back to the times of scientific discovery. Sugimoto draws particular inspiration from Franklin’s 18th-century lightning experiments, and Isaac Newton’s light experiments.

In so doing, Sugimoto shows how scientific study and discovery can be likened to artistic “Enlightenment”, also. Human curiosity to understand the mystery of nature, in both areas, led to great progress and a new way of understanding the world around us. With regard to science, Sugimoto notes that: “Humans were able to understand nature without the help of God.”

Indeed, science has helped Sugimoto to create art without God, and (using this new understanding of the nature of lightning) to make photographic works without the use of a camera. As the artist himself jokes, “Without a camera, I am not sure if this can be called a photograph!” – an extraordinary idea.  At the entrance of the museum, visitors are confronted by Sugimoto’s Lightning Field series – six images that scale the 11-metre-high hallway, and flash like lightning. These images were made in a dark room with the help of a Van de Graaff generator discharging 400,000 volts of electricity and without using any sort of camera. Flashes of light were directly printed on gelatin silver print, leaving marks reminiscent of plant roots.

Thus Sugimoto recollects Franklin’s scientific discoveries, in an entertaining and sensational manner, and with modern art pays homage to past science.

Similarly, in his new project, Polarized Colors, Sugimoto takes inspiration from Newton’s 18th-century analysis on optics and the discovery that natural light is made up of a spectrum of seven colours. Here, 50 framed Polaroid images surround the gallery wall, arranged in a single horizontal line. They look like miniature Rothkos, rather than a spectrum of natural light from a clear morning in Tokyo. The artist achieved these works by setting up a prism in the centre of his studio in Tokyo, on a very clear winter morning, and divided the light into seven colours, which were then projected on to a white wall. The reflections of light were recorded using a Polaroid camera. Another inventive use of past scientific phenomenon, to inspire modern art.

Indeed, Sugimoto will continue to connect with the past for a further three exhibitions at the Marugame Genichiro-Inokuma Museum of Contemporary Art in the next year – focusing now on Architecture, History and Religion. Given the inventiveness of the first in his Origins of Art programme, it will be fascinating to see what Sugimoto comes up with next. 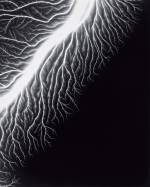 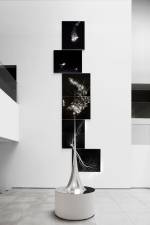 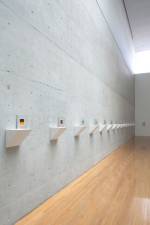