Theaster Gates’s new show at Kunstmuseum Basel is a heady cocktail of thematic elements. South Chicago’s favourite son, a one-man conduit for potent acts of grassroots regeneration and collective emancipation, has reinvented the Virgin Mary as the Black Madonna, and conflated Basel’s history as Switzerland’s seat of printing and publishing with his own commitment to making visible the cultural history of African Americans through his ever-growing collection of publications and archives. He has even started - simultaneously with and inspired by this show - his own publishing imprint: The Black Madonna Press. In a prosperous Swiss city with little racial diversity and strong ongoing Catholic traditions, these gestures are charged. And Gates is detonating two further charges over the summer, at Hanover’s Sprengel Museum (from 23 June) and Munich’s Haus der Kunst (from October 2018), all with their own programmes of talks, performances and disruptive, joyful or riotously musical events. The fact that, two weeks after opening, a poster advertising the show outside the Kunstmuseum had been ripped in half, removing the face of one of his Black Madonnas, is surely testament to this show having touched local nerves. 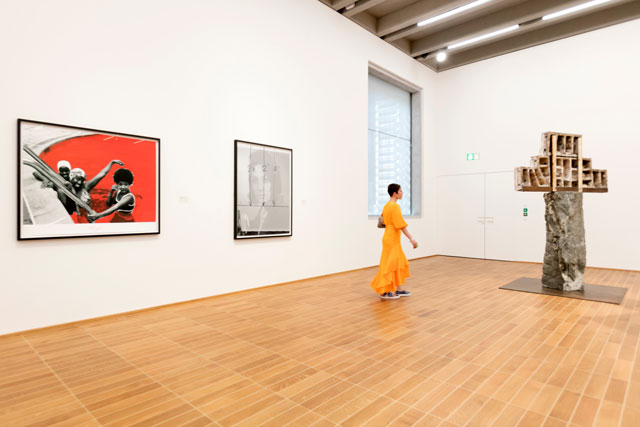 But the Black Madonna is nothing new – this is Gates’s point. For centuries there have been icons of the Virgin Mary, who, for reasons unknown (possibly centuries of smoke from candles, possibly their true original colouring), have dark skin. Since medieval times, across central and eastern Europe, these Black Madonnas have been worshipped, carried aloft at festivals, and visited by hundreds of thousands of pilgrims; there is even one in northern Switzerland, apparently. It is no wonder that Gates relishes the racially affirmative possibilities of such a subversion of the more typical presentation of Mary in books and paintings through the ages as a pale faced, rosy- cheeked brunette. With this and his other Black Madonna exhibitions, Gates is exposing the foundations of our cultural norms, triggering insights into publishing as propaganda. After all, Eurocentric Mary achieved dominance only thanks to the origins and cultural preferences of those who controlled the means of image reproduction. After Johannes Gutenberg invented the Gutenberg press, in Germany, around 1439, this tool for mass reproduction was rapidly adopted throughout Europe, and spawned millions of Eurocentric bibles, which then flowed all around the globe.

Gates has said that the aim of this show is to challenge and confront (he has apparently talked of wanting to place a Black Madonna on every street in Basel), but it is far from some relentless diatribe on political correctness; it is a carefully choreographed journey through the aesthetics of consumer culture and spiritual iconography, conducted with Gates’s characteristic mix of mischief, playfulness and intensity. 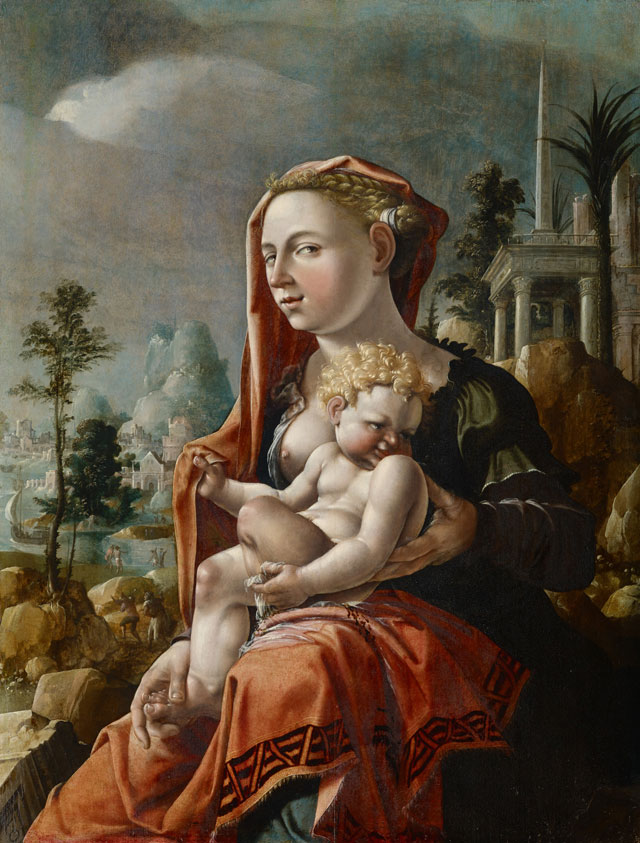 We are welcomed to the exhibition by a most unusual Madonna, just inside the door of the first of Gates’s show’s two venues, in the Kunstmuseum’s Neubau. This Madonna has been selected from the museum’s own archives and it is hard to imagine Gates finding a more atypical one: there is an insolent, sideways slant to the eyes in Maerten van Heemskerck’s Madonna mit Kind vor einer Landschaft (Virgin with Child in Front of a Landscape, 1530). Her unconventional attitude – the defiant expression, combined with the exposed right breast and the fleshy, almost adult-looking limbs of her child - has inspired Gates to dub her the Ghetto Madonna.

Around the room are some far more serene companions: The Madonnas (2018), eight framed digital prints with silkscreen interventions, all taken from the extensive archives of the Johnson Publishing Company. This famous Chicago publishing house was founded by John H Johnson in 1942 to establish a very different, aspirational image of black Americans through lifestyle magazines such as Ebony and Jet. Its archive is now part of Gates’s own archive, and he has delved into the collection, finding a wholesome range of images of women in a variety of situations and poses, from formal to casual. While clearly playing their part in Johnson’s successful campaign to create an appealing African-American consumer market, there is something uplifting and celebratory in these beautiful prints of non-celebrity women living the American Dream, long before such images became mainstream. 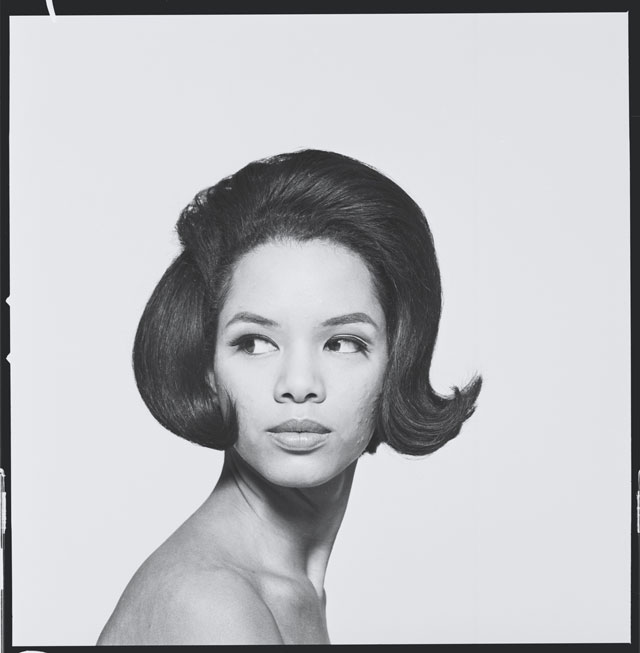 As elsewhere, Gates has modified the images using the graphic mark-up symbols and measurements typical of old-school, analogue printing, along with his own texts and interventions; evoking the processes of judgment, assessment and measurement that underpin their creation. These Madonnas are part of a large installation centred around a huge, bespoke cross-shaped wooden cabinet in the middle of the room – the work is called Facsimile Cabinet of Women Origin Stories (2018). Within the cabinet are hundreds more black-framed images from this archive, which viewers are allowed to take out and admire (albeit only after donning a respectful pair of white-cotton archivist gloves); already, he is changing the rules of engagement. 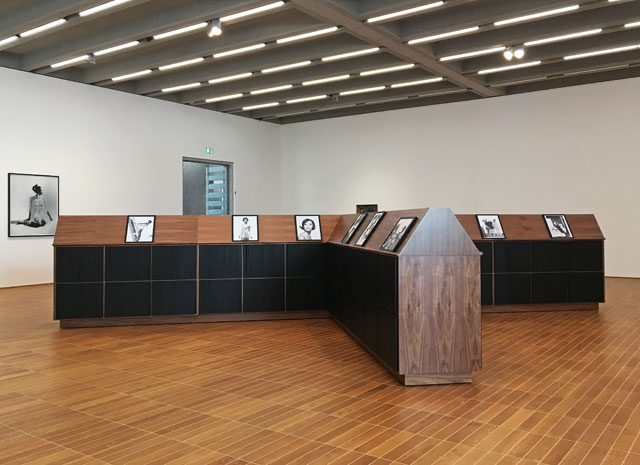 In an interview in the exhibition programme, Gates talks of his long-held interest in archives and the realisation “that organised information had power and that people who organise information, for institutions or for themselves, were involved in a work that was not just about the present but the future”. This cabinet is his way of organising the past and the future, he says.

Next to the slant-eyed Madonna there is a disconcerting video comprising clips of child actress Shirley Temple in black-face makeup, taken from the 1935 film The Littlest Rebel. In this piece, called Black Temple: Shirley Temple Goes Black (2016), she plays a Southern princess who ends up hiding from Yankee soldiers. 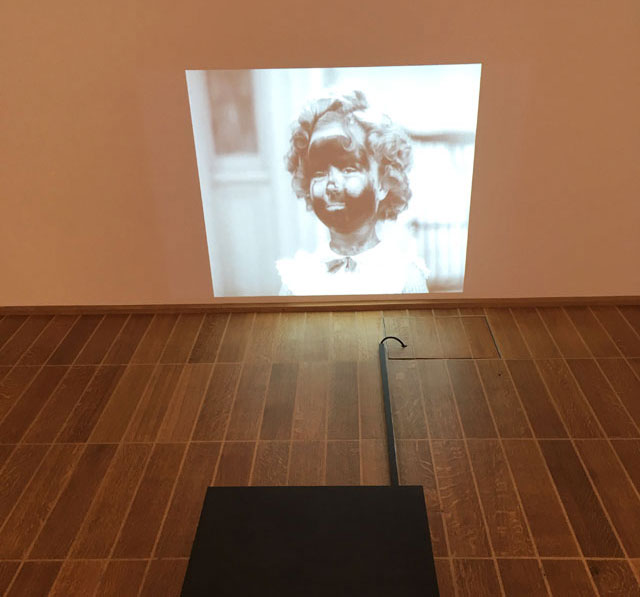 Scenes of Temple, either fresh faced or painted a slick and grossly unrealistic, tar-like black are interspersed with the manic, crowd-pleasing antics and dancing of Bill “Bojangles” Robinson, her real-life mentor and co-star. When Temple tries to “blend” in with her black co-stars, the cultural stereotyping is vividly apparent, and Temple’s innocence at the socio-political implications of what she is being asked to do only highlights the gesture’s toxicity. 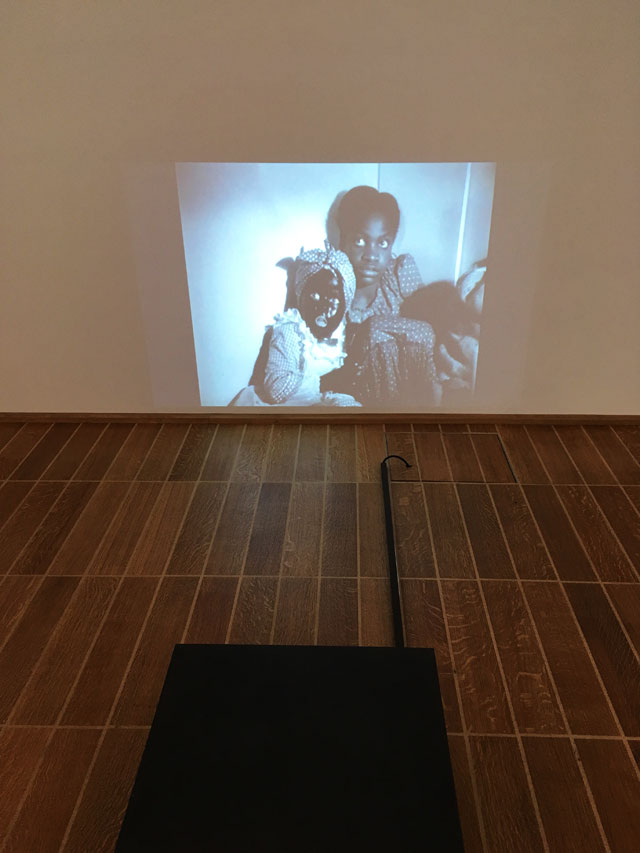 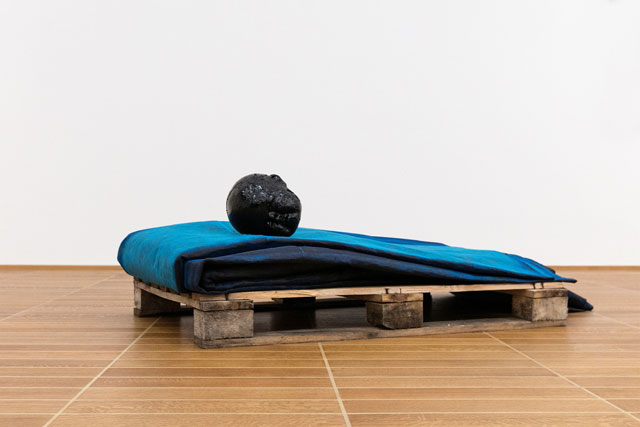 This work and the nearby Tar Baby III with Rubber Components (2016) were created for Gates’s 2016 show Black Archive at Kunsthaus Bregenz. With the latter, a tarred baby’s head lies on a folded pile of blue roofing material – tar and roofing material being regular components of Gates’s work. This replica of a carved head has been taken from the collection of Edward J Williams; an archive of 4,000 objects Williams created featuring as many objects and images as he could find of negative stereotypes of black people and their lifestyles, in order to remove them from the market. Gates’s has also acquired this “negrobilia” collection, and likes to deploy elements in his work. But sometimes the archival origins of an object seem of more interest or value than the gesture itself, which is also the case with the wonderfully titled icon Gates has conjured from decorative terracotta elements salvaged from a demolished Chicago building and a pedestal hewn from Swiss rock: A Cross Between Finance and Pastoral Care (2017). 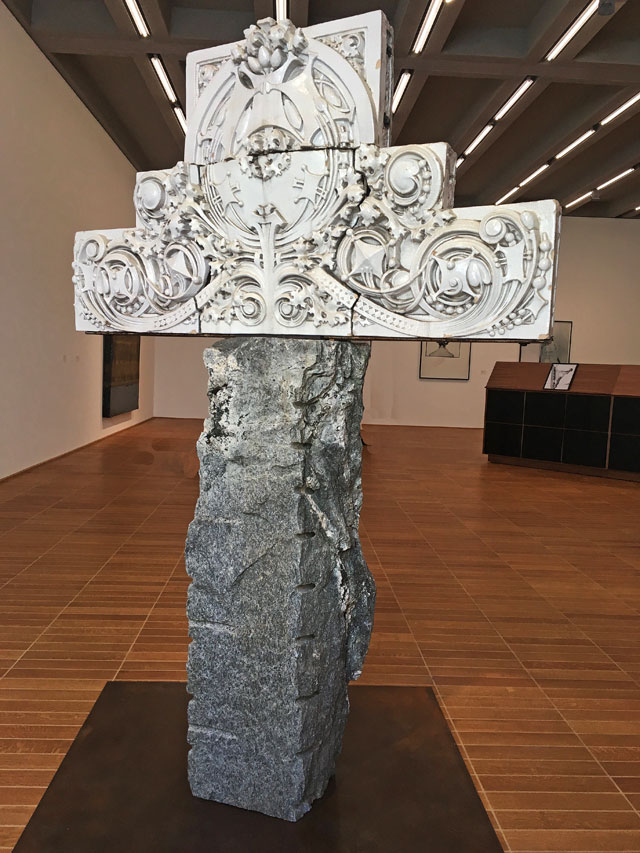 That, however, cannot be said of Walking Prayer (2018), one of the first works encountered in the Kunstmuseum’s second venue, the Gegenwart. On one almost continuous shelf around the gallery’s interior perimeter are hundreds of black-bound books, the lettering on their spines picked out in gold. 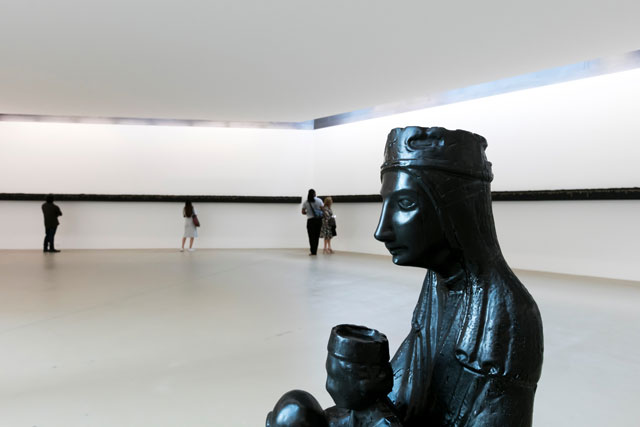 These are rebound copies of publications, also from the Johnson Publishing Company – books about politics, social science, history, spirituality and Black Power, according to Gates, which “demonstrate the intellectual and cultural life of Black Americans”. Gates has picked out a few words or lines or the title of a book and embossed them on to the spines. 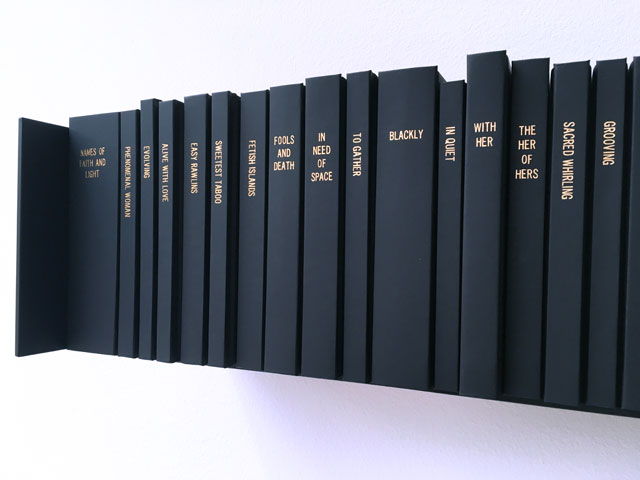 The idea, he has said, is that you might start at one end and walk the entire line, intoning the titles aloud like some kind of Black Power litany. At the centre of this ritual space is Gates’s own Black Madonna (2018) sculpture – a Virgin and Child made of moulded tar. It is an everyday kind of Madonna, modelled apparently from a keychain Gates was given. Already, she looks slightly sweaty, knocked about (Gates apparently threw wine on her at the opening). 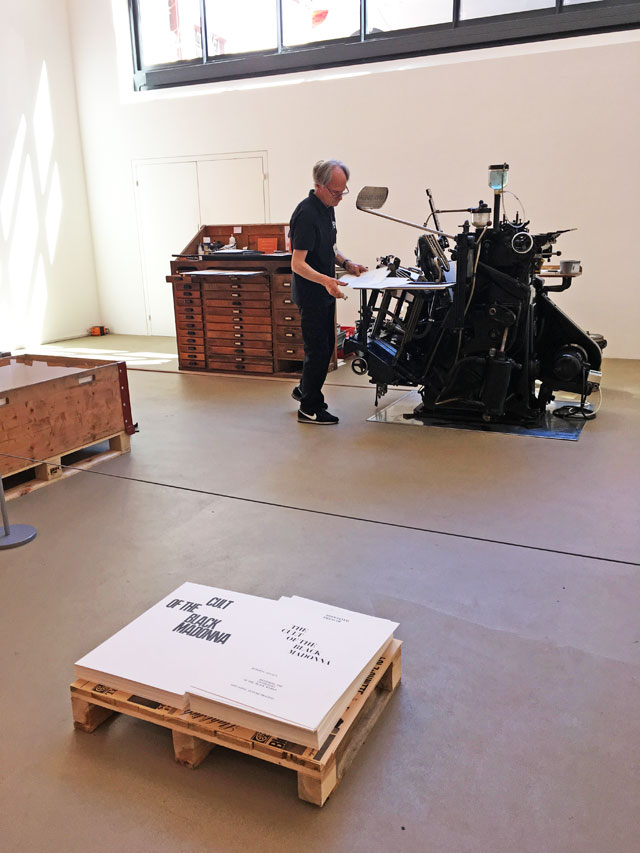 Along the corridor, the pump and wheesh of a Heidelberg press – loaned from a paper museum a few doors away – sets up a pleasing percussion as it prints crisp pages of black type, some of which are destined for a book/artwork Gates is producing along with the exhibition (titled Black Madonna Press with King and Believers, 2012/18). Its rhythm accompanies you as you watch the riveting double-video installation around the corner - Do You Hear Me Calling: Ma Ma Madonna or What is Black Power (2018) - and up the stairs to another gallery where more of Gates’s doctored and adapted images from the Johnson archive are displayed in an arrangement he has titled: All Night I Looked for Her, I Looked for You, I Looked for Myself; Black Madonna Stripes With Afro Model (2018). 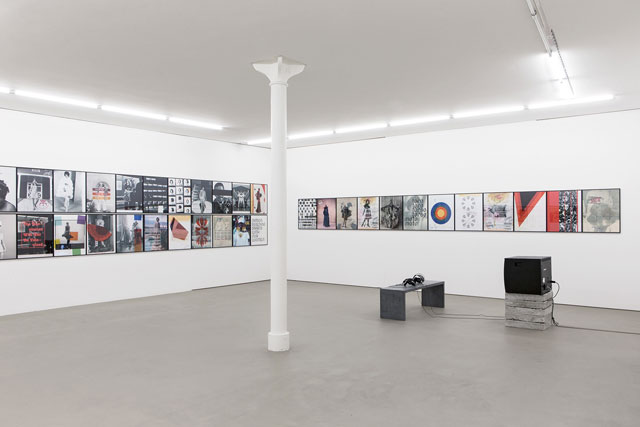 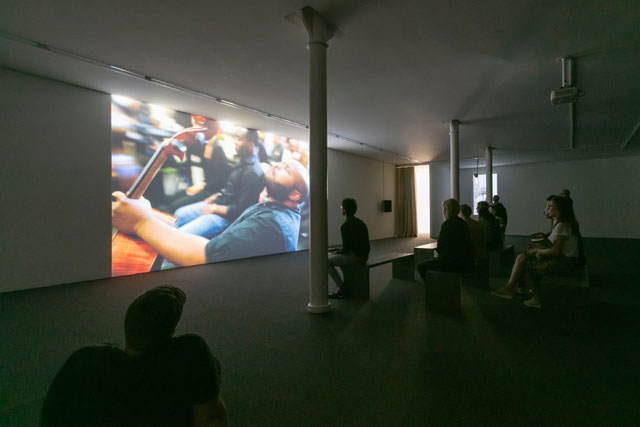 Theaster Gates. Do You Hear Me Calling: Ma Ma Madonna or What is Black Power, 2018. Installation view. Photograph: Veronica Simpson.

It comprises a chorus-line of black female empowerment images, surrounding an old-school boxy TV set, playing a video of How to Sell the American Negro – a genuine piece of advertising from the mid-20th century, promoting this “new and hitherto undiscovered” market. The sass and style and attitude of the female warriors on the walls says everything that needs to be said about the patronising voiceover; it is shocking when you realise that the film was made by the Johnson Publishing Company itself, to drive white businesses to use its magazines to reach this new audience (the ends, presumably, justifies the means).

Although some might question Gates’s appropriation of the role of female emancipator, his intentions seem heartfelt: he told the Art Newspaper recently: “It feels like a great moment to publicly reflect on the power that black women have offered in my life. There’s no better Madonna than my mother.”

And it is a whimsical but wonderful evocation of his mother that we encounter next. To get to the end gallery on this first floor, you have to step over a wide, clunky stretch of vintage bathroom tiles, still attached to the concrete plinth from which this floor has clearly been ripped. Called Bathroom Believer (2018), it is a tribute to Gates’s mother, who apparently used to lock herself in the bathroom when she felt the need to pray. Looming gently over this unorthodox prayer mat is a ladder of overscaled, fluorescent striplights, only some of which are working – a humorous reference to the utilitarian nature of Gates’s mother’s spiritual sanctuary, perhaps, but also one which, through its scale and sense of embrace, may signify the light that would guide her in times of trouble. 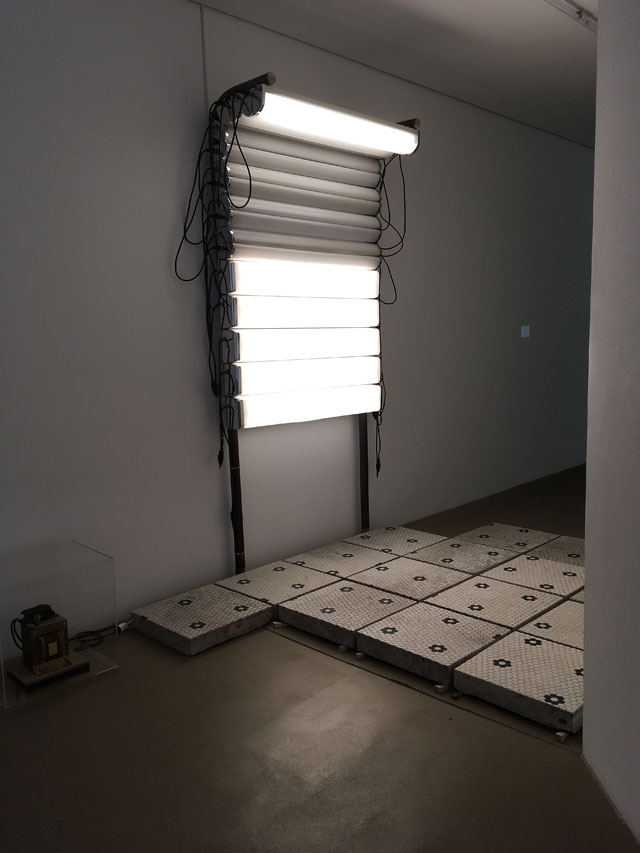 Beyond the bright, white glow of this icon, we step into a darkened room, where Gates’s choreography reaches its crescendo. On a large screen, there is a choir of entirely white people dressed in black. They hold up their black-bound scores and sing the most beautiful, incandescent Ave Maria – a feat of collective musicality made possible by the ink-fuelled machinations of the black, printing press, clearly audible, wheezing and clanking in the downstairs room. The film is Ave Maria, an Exercise in Reproduction (2018).

Whatever the conflicting reactions of Basel’s citizens – or those encountering the accompanying shows in Munich and Hanover – Gates welcomes it all. He told the Art Newspaper: “The way I use history, I want people to become hungry to know more of it. I want to basically feed new historians, new interrogators.” And now he has the means to disseminate a whole new band of interrogators, having recently acquired his own German-made Heidelberg Windmill printing press, using the $100,000 he won for the Nasher Sculpture Center’s 2018 Nasher Prize. It has pride of place in his studio in a former brewery, where his own sculpture used to take place. And that gesture itself (literally) speaks volumes. 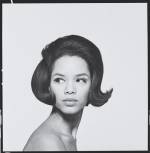