In Tate Modern’s latest exhibition, curators Jessica Morgan and Flavia Frigeri make an ambitious attempt to widen the geographical boundaries of the pop art movement of the 1960s and 70s

Jasper Johns (b1930), Claes Oldenburg (b1929), Richard Hamilton (1922-2011), Robert Rauschenberg (1925-2008), Roy Lichtenstein (1923-1997) and Andy Warhol (1928-1987). Sound familiar? These are artists whose work you will categorically not see in the latest homage to pop art at the Tate Modern. For years now, art history books have dedicated page after page to them whenever the topic of pop art crops up. The critical discourse on the movement has often fallen too easily into a Gombrich-esque linear discussion. Another erroneous perception of the movement – largely due to it being attributed to the US and Britain – is that its main focus was consumerism. Pop art had, in fact, provided artists from all over the world with a vehicle to hold up a mirror to the troubles they were facing in their own countries in a clear and powerful way. For most countries at the time, consumerism just wasn’t up there on the list of pressing issues. Instead, issues such as censorship, social imbalances, war, civil rights and the role of women were more urgent. What this exhibition sets out to do is demonstrate that pop art was not just a collectivised mockery of consumer culture: it was, in fact, a global phenomenon that addressed serious issues.

There is a slight problem, however, when pop art addresses issues such as censorship or social imbalance. At best, it highlights the situation, but ultimately it trivialises serious hardships. Perhaps this is why pop art has not been celebrated on this scale before? Without Rebellion (1970) by Jerzy Ryszard “Jurry” Zieliński (b1943) is one of the first pieces you see in this well-packed exhibition. It features a large red tongue that rolls out on to the floor with a giant nail piercing it. Bearing in mind that the artist comes from Poland, which was then under communist rule, it doesn’t take a genius to figure out that censorship is being suggested here. There is definitely merit in the placement of this piece right at the beginning of the exhibition. It is big, bold, direct and in your face. It sets the tone quite well. But that tone is one of sensationalism and with too much leaning towards style.

One of the key themes of the exhibition is the role of women. The history of pop art – like the majority of art movements – is one often told by men about men. The exhibition succeeds in arguing that the pop movement had a high level of female artists using the pop style to express issues around gender roles as well as sexual liberation. Valentine (1966) by Evelyne Axell (1935-72) has been described previously as a “sexual revolution in art”. The image features a female silhouette – with an unzipped zipper on top – as well as an astronaut helmet symbolising female freedom in the context of the space race between the US and the USSR. In terms of sexual liberation, one of the more striking pieces on the subject belongs to Bernard Rancillac (b1931) in the form of Pilules Capsules Conciliabules (1966). The piece shows a woman whispering into someone’s ear while an image of a baby in a uterus is featured next to it. At the time Rancillac made it, the contraceptive pill was not yet legal and there was no open conversation about it.

A handful of the rooms in the exhibition are dedicated to the works of one or two artists. This was probably to break up the more general themes of the other rooms with a more focused insight into what some of the pop artists around the world were concerned with; to draw attention to individuals who hadn’t received the kind of attention that the American pop artists received. The room dedicated to the Czech-born artist Jana Želibská (b1941) is probably the most successful. Her work Kandarya-Mahadeva (1969/2010–12) refers to the temple of that name in India and plays around with the notions of tantric Hinduism and erotic rituals. It comprises a large cube-shaped light box with panels of female dancers on top with mirrors replacing their genitals – removing any chance of voyeurism. It’s one of the works in the exhibition that lingers in the memory, but more so for the boldness and scale than its intellectualism.

The room dedicated to the work of Cornel Brudaşcu, who was born in Romania in 1937, fails to justify an entire space simply because his work doesn’t seem as urgent as the others in the exhibition. Guitarist (1970) features the face of a friend transposed on to the body of a rock musician. There is a political undertone to this work and others, in the sense that travel to the west was banned in 1970s Romania and western culture was experienced mainly through western magazines rather than first-hand experience. His works therefore acted as an attempt to reflect the conditions at the time.

The final room in the exhibition – entitled Consuming Pop – is probably the most “traditional” in that it covers the well-documented pop art preoccupation with consumerism. The walls are covered with The Laughing Cow (1967/2015) wallpaper of German artist Thomas Bayrle (b1937), featuring the famous logo of the cheese company. The effect is suffocating and oddly terrifying and acts as a pertinent metaphor for the aggressiveness of advertising within consumer culture. It is disappointing, however, that the exhibition concludes with the very theme (consumerism) that the show has tried to diverge from. It is hard to decide whether the room acts as a bridge between the North American/British pop artists and the rest of the world, or whether it simply undoes the message of the show. 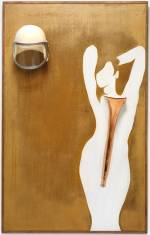 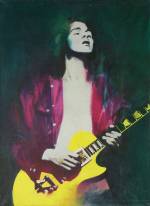 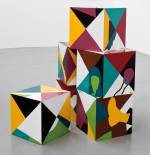 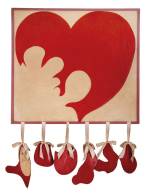 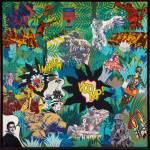 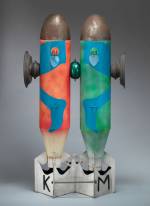 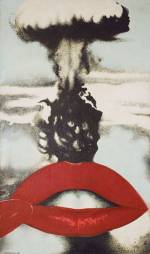