The Not-So-Secret Language of Pins

The Not-So-Secret Language of Pins

A skilled diplomat's arsenal might include a surprisingly diverse range of tactics because a successful persuasion, in fact, largely depends on the personalities involved in the negotiations. Madeleine Albright, who served as US secretary of state from 1997 to 2001 during the administration of former President Bill Clinton, employed a truly novel 'weapon' to express diplomatic means and ends, her collection of pins and brooches. Prior to the Clinton appointment, from 1993 to 1997 Albright was US ambassador to the United Nations. Born in Prague, her father was a Czech diplomat and ambassador to a Yugoslavia headed by dictator Marshal Tito. A passionate advocate of freedom and justice, Albright is an outspoken woman with a refreshing sense of humour. Her jewellery collection provides insight into her character as well as demonstrates the power of visual symbols to convey critical messages when, often, words pale.

Nearly a decade ago, the Museum of Arts and Design (MAD) in New York City, then known as the American Craft Museum, hosted a show dedicated to Albright's mastery of the language of pins. At that time, curatorial consultant Helen W. Drutt English, a specialist in modern and contemporary crafts, invited jewellers from around the globe to create pins communicating a specific message of their choice. These creations formed a travelling exhibit that toured the US and Europe, Brooching it Diplomatically: A Tribute to Madeleine Albright. Once again, MAD is spotlighting Albright, this time by exhibiting her personal collection, now totalling more than 200 items, for the delight of all who view the show in New York and venues on the US tour schedule or the accompanying volume written by Albright and published this fall by HarperCollins.1 A twist on former US President George W. Bush's infamous comment spoken at the 1988 Republican National Convention, 'Read my lips', the title of MAD's exhibit, Read My Pins, makes clear that Albright's use of pins is calculated for effect.

Perhaps it is telling that Albright, as the first female secretary of state, turned to a traditionally feminine mode of communication. Foreign leaders with experience of Albright's approach know her to be a formidable opponent, while a number of them have been inspired by her ideals and became her friends. Rather than downplay her strength, Albright employed her pins as banners or badges. In the catalogue, she explains:

'As my pins became more expressive and drew more comments, I had cause to reflect on the relationship between appearance and identity. To what extent, to adapt the old saying, do pins make the woman or, for that matter, the man? After all, the display of pins has never been confined to one gender'.2

Citing such examples as medieval knights who wore jewelled markers of their status, conspirators covertly signifying their loyalties with jewellery during the English Civil War, George Washington's diamond eagle and Josiah Wedgewood's abolitionist medallion designed for opponents of the slave trade, in hindsight Albright places herself in a long-established tradition. In his catalogue introduction, MAD Chief Curator David Revere McFadden says that Albright's collection grew organically, without any stated purpose or design, 'in response to the changing circumstances and opportunities of her life and career'. The pins and visual cues they impart function beyond the realm of international diplomacy, reaching to the social, cultural and personal. Attached as they are to a woman who has made an impact on history, these pins can also be viewed as a chronicle of Albright's transformation from mother of three children to political powerhouse. Through the stages that led her there, after earning a doctorate in public law and government in 1976 and divorcing her husband in 1983, Albright wore pins to proclaim her independence as professor of world affairs at Georgetown University in Washington, DC, and advisor to presidential candidates. While in earlier decades feminists disowned feminine clothing and accessories, Albright remarks that feminist protocols in the 1980s were much less restrictive:

'The idea was that a woman could show independence from stereotypes without eschewing ornamentation; it was no longer thought essential to dress plainly in order to be taken seriously or to imply that wearing earrings made one unable to think. Since women were making inroads in business and the professions, power jackets and pantsuits came into style. The brooch was a natural accompaniment'.

The exhibition and catalogue mirror the dual nature of Albright's collection: referencing serious (war, Hurricane Katrina and the environment, for instance) and light (a cowboy hat, fairy tale castle, UFO, etc.) subjects, frequently at once. Her pins are portioned into categories by subject, theme or message, with catalogue text chronologically relating Albright's autobiography. In 'The Serpent's Tale', the first section, viewers will learn of the initial use Albright made of pin diplomacy as America's ambassador to the U.N. during Clinton's first term in office, following the first Persian Gulf War. A US-led coalition had reversed Iraq's invasion of Kuwait. Iraqi leader Saddam Hussein refused to comply with U.N. demands for weapons inspection. In typically forthright style, Albright expressed her opinion, and the Iraqi press responded with a poem comparing her to a serpent. Undaunted, Albright wore a serpent-shaped pin to her next meeting with Iraqi officials. Other pins grouped in this section include a number of bejewelled bees, a laurel leaf and Byzantine shield. A silver and lapis lazuli rocket-propelled grenade launcher made in Pakistan, a silver dagger made in Yemen, a dragon/sword combination acquired in Turkey, and an interceptor missile are other instances of diplomatic might wielded, decoratively, by Albright during these years.

Moving through subsequent pin groupings, visitors will observe a number of extremely personal and touching pins and other jewels: for instance, an alumnae leaf from Wellesley College, her husband's fraternity pin, gifts from family members and in-laws (a jade dragon pin, a ruby fish, a Bohemian garnet set circa 1860, and a ceramic heart made by her daughter Katie at the age of five); a suffragette pin circa 1900; and a trio of enamelled ships representing her three daughters. Albright says that most of her jewellery acquired before the 1980s, particularly pieces of considerable value, were gifts. Her acquisitions during the past few decades, she states, are dear to her for their emotional connections and content rather than intrinsic value. Nevertheless, there is plenty in the show that will dazzle the eye.

Viewers will note the many gifts received by Albright from foreign leaders and admirers at home, among them a lion from British Foreign Secretary Robin Cook; a maple leaf from Canadian politician Lloyd Axworthy; a flower from Spain's Javier Solano (NATO, EU and WEU); an 'Ode to the US Armed Forces' from New Mexico governor Bill Richardson and his wife, Barbara; and a large Monticello flag set with crystals from Julann Griffin (a present to Griffin from her husband, celebrity Merv Griffin, when they were married). There are charming antiques, as well (a red-white-and-blue French bow and US sailor, both from 1940; a leopard-print purse circa 1970; a French urn circa 1900; etc.)

Clearly dear to Albright's heart, her Americana-themed pins are a centerpiece of the show.3 Here there are campaign buttons from various eras, Uncle Sam's top hat, a liberty torch, a memorial bow from 1940, a Bakelite Statue of Liberty and an American eagle. Undoubtedly, visitors to the show will find pins that are close to their own hearts, as all of the displayed jewellery has great potential for eliciting a personal connection. The expressive potential is, indeed, astounding: whimsical amber instruments for a jazz band (worn collectively by Albright for a presentation at the Thelonious Monk Institute of Jazz), a jewelled Mickey Mouse sporting stars-and-stripes attire, a variety of fish, ladybugs, turtles, spiders, frogs, butterflies and dragonflies (the latter known to the English as 'the devil's darning needle' but as symbols of strength in Japan); Swarovski hot-air balloons; Dorothy's ruby slippers for Wizard of Oz fans; a 'Shaman Bear' and 'Eagle Dancer' from Native American folklore; moons and stars; doves of peace; and, of course, many embodiments of the truly universal symbol, the heart. Albright gives eloquent import to her collection at the close of the catalogue, summing up the ability of symbols to evoke every human emotion:

'One might scoff and say that my pins didn't exactly shake the world. To that I can reply only that shaking the world is precisely the opposite of what diplomats are placed on earth to do'.

Theodore Roosevelt (US president, 1901-1909) thought that the best response to the 1823 Monroe Doctrine was to 'speak quietly and carry a big stick'. He took his words from an African proverb, translated best as 'Speak softly and carry a big stick and you will go far'. For Albright, the most effective diplomatic tool in her arsenal has been to speak plainly and punctuate with a pin. Can it be doubted that her method has taken her far? Certainly, her response is one of the more creative in recent political history.

1. Read My Pins: Stories from a Diplomat's Jewel Box by Madeleine Albright with Elaine Shocas, Vivienne Becker and Bill Woodward, with photography by John Bigelow Taylor, consists of an introduction by Museum of Arts and Design Chief Curator David Revere McFadden; themed, chronological chapters; detailed captions (reproduced as wall text for the exhibit); more than 200 full-color photographs; and a 'Pindex' relating specifics for each pin.

2. All quotations cited in this article have been taken from the exhibition catalogue. 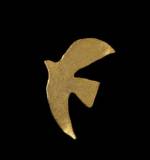