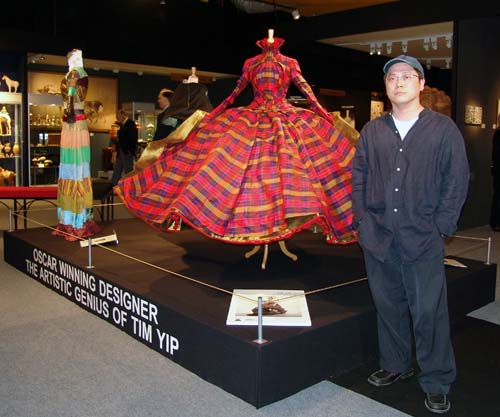 At this year's fair, more than 55 exhibitors from the Far East, Europe and the USA set up booths in the Armory and presented a wide variety of Asian art, ranging from antiquity to the present, and from India, China, Japan, the Near East, the Himalayas and South East Asia. Some major Asian art dealers from New York and abroad did not occupy booths at the fair but exhibited in their own or other locations in New York. For instance, Giuseppe Eskenazi of Clifford Street in London set up his exhibition of ancient Chinese bronzes and sculpture at PaceWildenstein on 57th Street in New York; Jim Lally exhibited in his gallery on 57th Street; and Robert Ellsworth exhibited in his space on Fifth Avenue. Among the many categories of objects exhibited at the fair, and among the dealers outside of the Armory, were arms and armour, basketwork, bronzes, books, carpets, costume and textiles, furniture, jewellery, miniatures and manuscripts, pottery, porcelain and enamels, paintings, prints, sculptures, snuff bottles and much more.

As a safeguard for buyers, recognised specialists strictly vetted each item for sale at the fair for quality and authenticity. There were separate honorary vetting committees for each category, with the membership of each drawn from leading authorities in the respective fields, including many museum curators. There are two main reasons for this vetting. It acts as a safeguard for buyers, to ensure, as far as possible, the authenticity of the material presented and thereby to inspire confidence in the public to buy; and it also maintains the integrity of the fair and ensures the reputation of the exhibitors. The honorary vetting committee co-chairmen this year were dealers John Eskenazi, from London, and Joan Mirviss, from New York. New York dealer Robert Ellsworth is the committee's Chairman Emeritus.

The fair's preview night was held on 31 March. As in the past, the proceeds from funds collected went to benefit the Asia Society in New York, which was founded in 1956 by John D Rockefeller 3rd as a non-profit educational organisation dedicated to fostering an understanding of Asia and communication between Americans and the peoples of Asia and the Pacific. This year at the fair, the Museum of Arts and Design in New York created a special loan exhibition, 'Heavenly Earth: Contemporary Asian Ceramics at the Museum of Arts and Design', which included miniature vessels with intricate and delicate celadon glazes by Chun Liao, exuberantly patterned work by Harumi Nakashima and meditative, architecturally pure works by Yasuo Hayashi, on display in one of the booths. Another special presentation this year, organised by the dealer Michael Goedhuis of Goedhuis Contemporary, featured the artistic expression of Oscar-winning Chinese designer Tim Yip (Figure 1), who discussed his work and presented an exhibition on loan featuring the original award-winning costumes from the martial arts epic movie 'Crouching Tiger, Hidden Dragon'.

The Ten Ten Foundation Inc. sponsored lectures that were held on 3 April. Mary Hunt Kahlenberg, Director of the Tai Gallery/Textile Arts, gave the morning lecture, 'Who Influenced Whom? The Relationship between Indian and Indonesian Textiles in the 17th Century', and in the afternoon, Amy Poster, Curator and Chair of the Department of Asian Art at Brooklyn Museum of Art, lectured on 'Asian Art in America: Building your Collection'. Michael Goedhuis, the New York and London dealer, who specialises in Chinese contemporary paintings, led a panel discussion on 4 April. 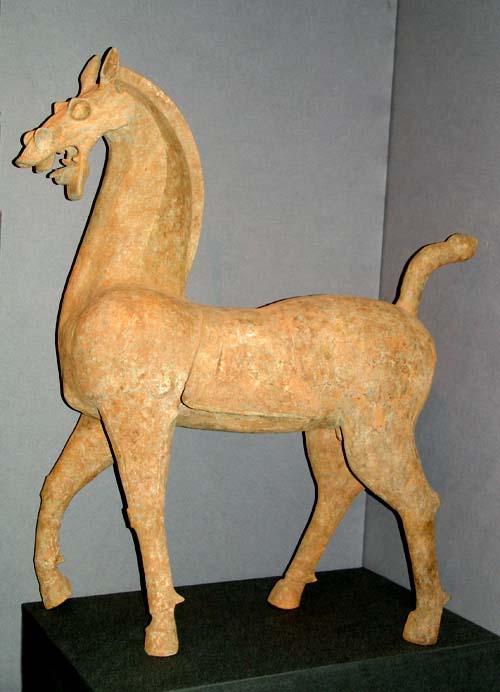 There were a great number of interesting and aesthetically appealing objects at the fair. Notable among them were two Chinese funerary ceramic horses (Figures 2 and 3) of the Han Dynasty (206 BC-220 AD). One of these is 84 cm high, has a green lead glaze, and is from Priestley & Ferraro, London, and the other, a large unglazed but painted figure of a walking horse, courtesy of A&J Speelman Ltd., London, is from China's Sichuan Province and of the Eastern Han Dynasty (25-220 AD). The Chinese Porcelain Company of New York provided a pair of large painted pottery figures of lokapalas from the late 7th or early 8th century. The figures are of grand proportions and crisply defined figural modelling, bearing armour of the Chinese Tang Dynasty (618-907). They stand 123.2 cm high (Figure 4) and are modelled in a mirror image standing pose, one atop an ox and the other on a small ram. Commonly placed in tombs in pairs, as guardians of the four directions of the universe, such figures, known as 'tianwang' (Heavenly King) in Chinese or 'lokapala' in Sanskrit, generally bear Central or Western Asian features that reflect a greater familiarity with foreigners in China's Tang Dynasty. Berwald Oriental Art, New York, exhibited a pair of earthenware horses (Figure 5), also dating from the Tang Dynasty of the early 8th century, (71.2 cm x 67.5 cm and 70.5 cm x 66 cm). Each horse is saddled and standing foursquare on a fitted plinth, the right foreleg stepping forward and the head turning to one side. The horses' tails are docked and bound with a runnel for the manes, originally fitted with hair in a realistic facsimile, and each retains similar pigments of red, black and white. Similar large-scale pairs, specifically created to interact as these two do, are found in several famous tombs of the Tang court around Xian, China. Thermoluminescence tests have confirmed the date of origin estimated for the pair.

Among the ancient Chinese bronzes and sculpture that Guiseppe Eskenazi exhibited at PaceWildenstein was a very beautiful marble Buddha of the Tang Dynasty, 77.5 cm high and seated in 'viras“na' (hero) pose (Figure 6). Although missing its head, right hand and fingers of the left hand, the work is powerfully modelled with wide shoulders, a broad, well-defined chest and narrow waist and wears layered monk's robes, which are arranged over the shoulders and diagonally across the chest and fall in well-spaced linear folds over the arms, stomach and thighs. Two apertures hollowed in its back were probably meant for the insertion of a 'mandorla', a sometimes flame-like aureole framing the figure and implying its majesty or divinity.

Sidney Moss Ltd. of London exhibited a number of scrolls of Chinese calligraphy, considered to be China's highest art form. Among them was a tall hanging scroll, showing ink written on silk in 'ts'ao-shu' (cursive or 'grass' script) written in the technique known as 'i-pi-shu', which is calligraphy executed all in one brushstroke (Figure 7). Of course, the brush had to be lifted for reloading with ink, and close inspection reveals where the line was cleverly rejoined with a heavier absorption of the thicker ink. The calligraphy is signed Wang To (1592-1652), written in Nanjing, with one seal of the artist, and has been dated to 1636. The text, which Wang To copied, is a letter by an earlier great calligrapher, Wang Hsi-chih (303-379), replying to a friend who had enquired after his illness, and who had himself been ill. According to several admirers, Wang To was the most accomplished of the 17th century calligraphers, and to some, the best of the Ming (1368-1644) and Ching (1644-1911) dynasties. Goedhuis Contemporary of New York and London exhibited a more recent example of Chinese calligraphy by Fung Ming Chip (b. 1951), titled 'Post-Marijuana', (2000), ink on paper (70 cm x 69 cm), written in a contemporary swirling script, alongside the traditional script, in a character-for-character translation (Figure 8). 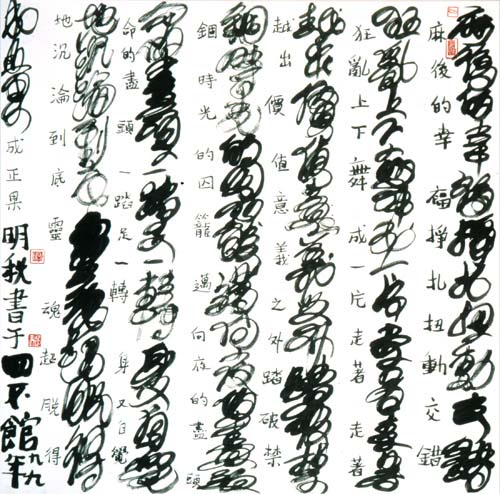 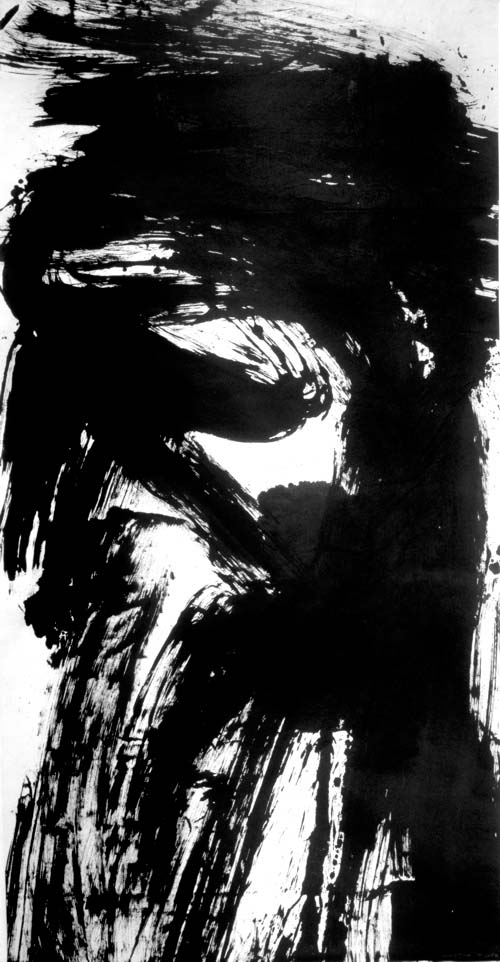 Japanese art was well represented at the fair with pairs of traditional six-fold screens such as 'Hawks', a pair of the Momoyama period (1573-1615), measuring 168 cm x 371 cm, exhibited by Liza Hyde of New York. Among other works, Brian Harkins of London exhibited 'Carp', a scroll painting in ink on paper (86 cm x 45.2 cm), by the master 18th century painter Itõ Jakuchu (1716-1800), signed 'Shin'enkan Jakuchu' painted with two seals, 'Ti jokin in' and 'Jakuchukoji' and another seal, 'senga zeppitsu'. Moving closer to the contemporary period, the Hiroshi Yanagi Gallery of Kyoto, Japan, exhibited 'Coming and Going Begging Monks' (135.3 cm x 32.8 cm), a popular subject of 18th, 19th and 20th century Japanese ink paintings, with this one by Nantenbo (1839-1925) closely following the design of a similar subject by Itõ Jakuchu that is now in a New York private collection. The Tai Gallery/Textile Arts booth represented master craftsmen basket makers of 20th century Japan with exquisite woven baskets (Figure 12). 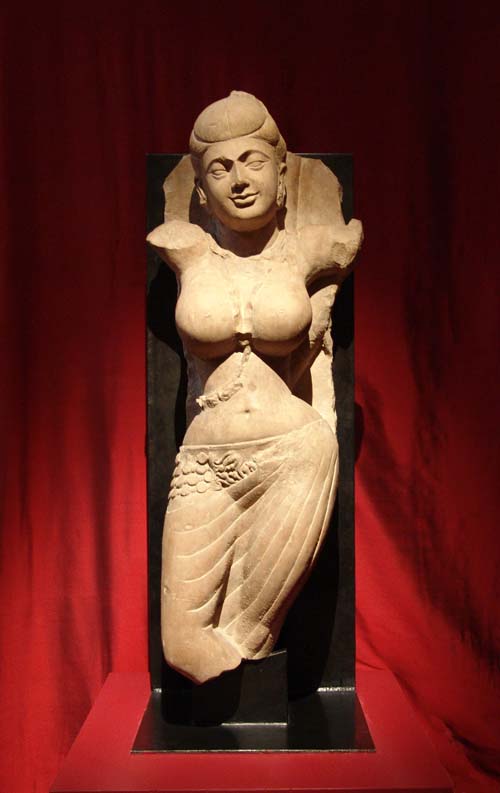 In the field of Indian and South East Asian art, John Eskenazi of Bond Street, London, presented two exquisite sculptures of Maya, mother of Buddha: one in beige sandstone (Figure 13) from 1st century Bihar, India, (89 cm); and one in terracotta (Figure 14), from the 5th to 6th century Gandharan region of Pakistan/Afghanistan, at 135 cm high, with the date corroborated by thermoluminescence analysis, depicting Queen Maya giving birth to the Buddha Shakyamuni with the baby Buddha emerging from her right hip. Doris and Nancy Weiner of New York presented another example from the Gandharan region, a beautiful stucco Standing Buddha (Figure 15) of the Kushan period, 3rd to 4th century, at 139.5 cm high. John Eskenazi exhibited a stucco Bodhisattva Maitreya from the same area, dated to the 3rd century, which has traces of polychrome and measures approximately 86.3 cm high; and a Central Asian grey schist head of a crowned Bodhisattva, also of the Kushan period, 2nd to 3rd century, which measures approximately 60 cm tall. Doris and Nancy Wiener also exhibited a bronze Parvati from South India, circa 1300, at 76.2 cm high (Figure 16). The Art of the Past Gallery presented a Pichwai (Figure 17) from Bikaner, Rajasthan, Western India, 1760-1770, in gouache and metallic pigment on cloth, at 208.3 cm2.

Doris and Nancy Wiener also exhibited a Bodhisattva Avolokiteshvara (Figure 18) in bronze with silver inlay and traces of cold gold and blue pigment of the Kashmir School of Western Tibet, from the 11th to 12th century (65 cm high).

Obviously, from what has been mentioned or illustrated here, it is evident that the fair was enormously successful in presenting splendid examples of Asian art. Unfortunately, it is impossible to present all the excellent objects, paintings and furniture exhibited, or name, individually, all the dealers who participated. Hopefully, they will all appear again next year with many more beautiful examples. 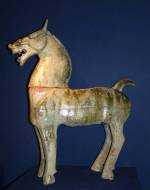 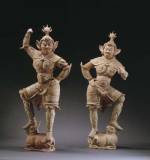 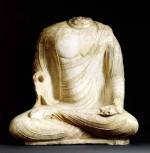 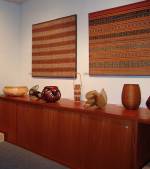 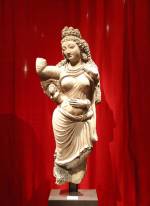 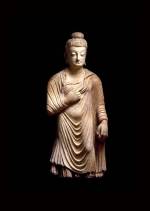