The Fabric of India

The Fabric of India

Every square inch of fabric in this exhibition has a story to tell, from a sweat-stained talismanic shirt to an opulent Mughal-style tent. The closer you look the more you will see

Indian fabric has been prized around the world for its quality and colour for thousands of years. Cotton from the subcontinent dating from 4,000 BC has been excavated as far away as Jordan. More recently (in the past few hundred years, that is) Japan and northern Europe have been avid buyers of Indian fabrics. Aside from the incredible skill of Indian weavers, Indian dyes and dying techniques were unrivalled until the invention of chemical dyes in the 19th century.

This exhibition is slick and beautifully lit. A red corridor of thread-lined walls leads to a high-ceilinged room, the centrepiece of which is a sultan’s tent dating from 1725-50. The front has been lifted to reveal the rich floral interior, which was painstakingly block-printed with recurring patterns of red poppies. This tent would have acted as a movable palace, a place to entertain on hunting trips or perhaps as opulent accommodation for military campaigns.

No less impressive are the reams of fabric embroidered and embellished with goldthreads, mirrors and silks. Even minerals such as mica were ground up and printed on to fabrics with adhesives. Nineteenth-century Indian fashions in particular seem to have dripped with glamour. A small section of scallop-edged cotton muslin from 1850 has been embellished with the iridescent wing cases of the jewel beetle (Buprestidae) and must have made a stunning addition to the dress for which it was made. It seems miraculous that something so delicate has survived for more than 160 years.

The evidence of the human hand is the most moving thing about this exhibition. Lovingly embroidered children’s cotton jackets, devotional banners and glamorous wedding saris bear testament to seminal moments in people’s lives across the centuries. But nothing tells a more intimate story than a talismanic shirt bearing the marks of its wearer. This 500-year-old garment is inscribed with the entire text of the Qur’an and carries the sweat stains of its owner. Shirts such as these are known across the Islamic world and were worn as protective items under battle dress or during illness. Who knows what dramas this particular example has witnessed?

Block-printing, a traditional technique still used by artisans in parts of India, involves carving a design into a block of wood, covering it in ink and pressing it repeatedly on to the fabric, taking care to line up the print. A short video demonstrates the process and the nimble hands required to cut the intricate patterns. It is mesmerising to watch these most skilled craftsmen at work and, perhaps unsurprisingly, this is a technique that is responsible for one of India’s most popular exports.

The floral, block-printed fabrics that became known as chintz found an enthusiastic reception in Europe – among the British, Dutch and French, in particular – from the 1600s. They were so fashionable and affordable that both servants and their mistresses wore the designs. However, the popularity of relatively cheap imported chintz fabrics began to threaten domestic textile producers and governments started to ban people from buying them, albeit without much success. There seems to be nothing made of this fact in the exhibition texts, but what is highlighted is that Indian textile producers really knew their markets.

In the late-19th and early-20th centuries, it was Indian weavers whose livelihoods were being undermined by cheaply manufactured cottons from Britain and this gave one inspired man the extra leverage he needed to start his own independence movement. In a section named Fabric and Freedom, flickering black-and-white footage of the diminutive figure of Mohandas Gandhi, wrapped in white khadi (hand-spun, hand-woven Indian cotton), tells the story of his campaign. Gandhi was a master rhetorician. During his speeches he often sat on stage spinning his own cloth, while appealing to his followers to do the same, hoping that this this would bring wealth and employment to the masses. The spinning wheel became a powerful symbol of independence and, in 1921, nationalists incorporated it in the design of their flag.

But the story of India’s fine fabrics doesn’t stop with independence from Britain. Needless to say, India still has a unique and thriving textile industry that exerts a global influence. High-end European fashion labels such as Hermès are seeking Indian expertise. A “cavalcadour” print scarf is on display here, sporting an Indian twist on the label’s classic bridle and harness motif. Beautiful red flowers, which took embroiderers in Mumbai 500 hours to complete, add an extra layer of glamour. There are also items that combine contemporary twists and western silhouettes with the traditional template of the sari, to produce incredibly elegant pieces. Western-style jackets and dresses also benefit from the skills of Indian textile experts, bringing a global collaboration and mutual exchange that has been going on for hundreds, if not thousands of years, right up to date in the final room of this stunning exhibition.

The Fabric of India is a true eye-opener. It caters to fashionistas, textile geeks and historians alike, while providing a portrait of India in textiles, with all its variety, colour and splendour. But you don’t need to have an interest in fashion, or even fabrics, to appreciate the beauty and skill on display in this exhibition. There is something universally gratifying about getting up close to the work of masters of any creative endeavour. 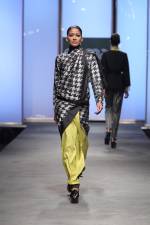 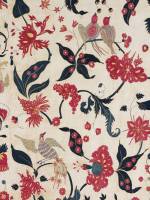 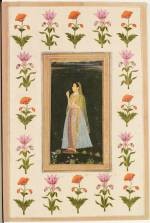 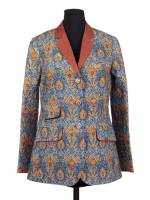 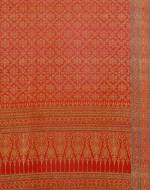