The Bunker Artspace – Art as autobiography

The Bunker Artspace – Art as autobiography

Given a test run last autumn and reopening on 2 December, The Bunker, a private venue fronting the collection of curator-collector Beth Rudin DeWoody, is a trifecta of firsts; first to give Palm Beach a serious art scene; first to show art as an evolving aesthetic and first of what I anticipate will be the new trend – the show space as self-portrait 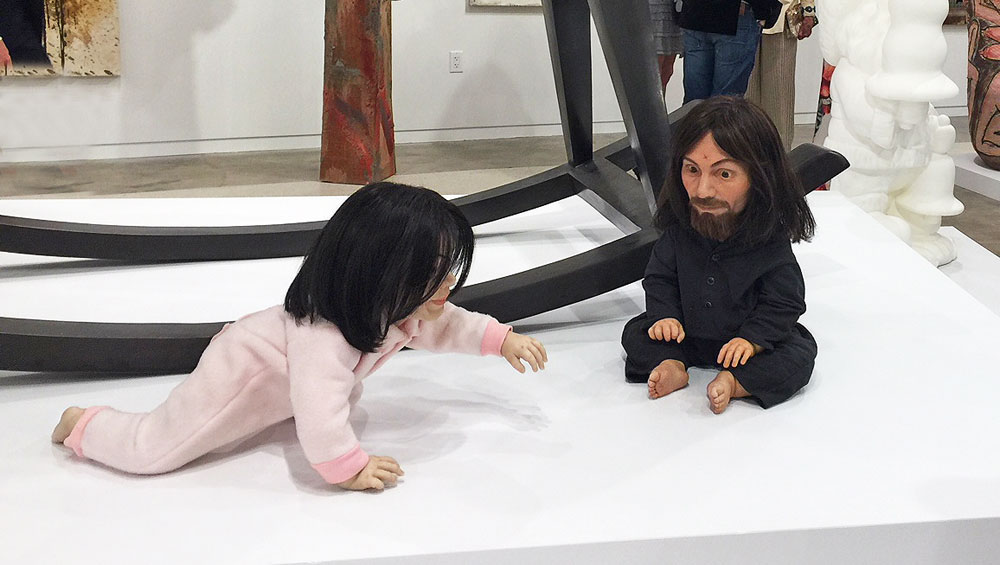 Building up to the frenzied diorama of Art Basel Miami Beach 2018, heavy action in West Palm has been vying for pre-opening attention. Advance word about the newly expanded Norton Museum is strong, but very much under wraps until its formal opening (stay tuned) on 9 February 2019. More immediate, given its soft opening last autumn, is Beth Rudin DeWoody’s The Bunker. This welcome new venue showing art then and now gathered a by-invitation-only crowd for the inaugural event – a sort of trial run, as it happened, because, although both building and art were ready for their closeup, they drew a visitor response that overwhelmed staff and scheduling. My review, among others, was embargoed and the space closed to viewing until new logistics were worked out. The deed, so to speak, was nonetheless done, viewing appointments were set up and with a new show in the works to time with Art Basel Miami Beach 2018, the inaugural one has been garnering attention. 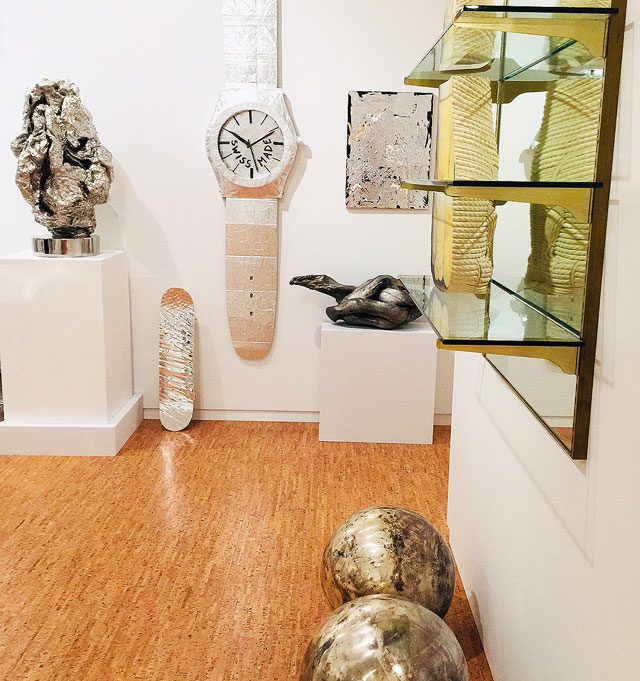 The idea for a dedicated venue came about as the alternative to warehousing 30,000 works of art that DeWoody wanted shown, a collection that evolved from exposure since childhood to artists and art movements on both coasts of the US. Speaking to wide-ranging interests, DeWoody has been collecting in a spirited, self-taught manner that one might call “multi-eclectic”. Beanie Babies and Swatch watches gave way to Depression glass and Rookwood pottery. Period furniture intrigued; the decorative arts entranced; sculpture muscled in. Pop art, conceptual art, California artists, photography – all found a perch. The spillover from her house in West Palm – itself a show space that leaves no inch uncovered – crowded the walls of her Manhattan apartment, overflowed to a flight of apartments in Los Angeles, and eventually filled a warehouse, where the agglomeration nagged at her like a pet begging to be let out. 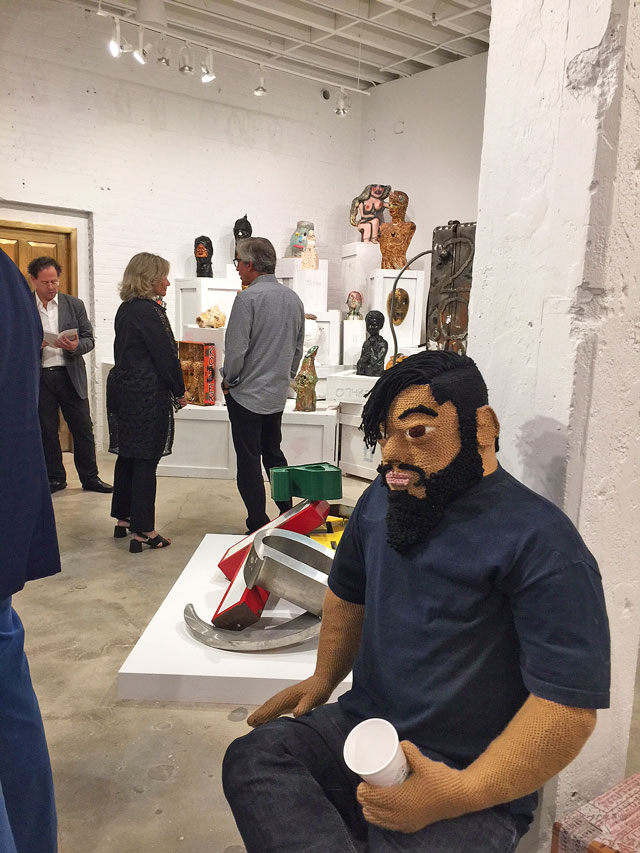 Scion of a real estate baron, DeWoody seized on the opportunity presented in 2015 by a rundown art deco structure in West Palm. Built as a munitions factory, remodelled and tucked away in a side street, it was far enough from Palm Beach to eschew “chic” and close enough to DeWoody’s estate to attach it emotionally as home. The resulting 16,000 sq feet of exhibition space allows for only 300 or so works to be on view at one time, inviting close enough editing to engage three curators to rotate the art through the year and stage a new exhibition annually to coincide with ABMB fair week. 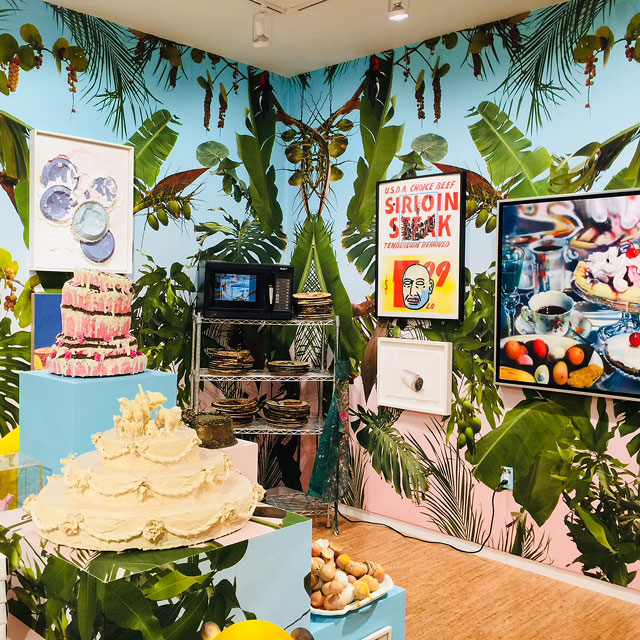 Still up, the inaugural show – an abundance of multimedia works smartly nestled into warmly lit galleries. Commanding two floors, they flow into each other but are curated for intelligibility into themed “rooms”. Some, like the works lining the Food Room and the Silver Room, hold fast to their allocations; others, loosely grouped in the two spacious East galleries, are all over the place, mixing up generations, ethnic groups, movements and materials. Refreshingly absent in our politically driven art scene is the heavy agenda. There are African American artists (Henry Taylor, Sam Gilliam, Nick Cave, William Pope.L) and female artists (Louise Erhard, Lynda Benglis, Nicole Eisenman, Nancy Grossman, Sherrie Levine). There is scatological art (Paul McCarthy), tough art (George Condo, Edward and Nancy Kienholz) and funk art (Paul Waters, Tom Friedman). Refreshingly missing is the currently popular “issue” art that deliberately targets racism, gender and economic inequality. Art about Art, the title of a gallery gathering work-by-appropriation, in its broader context represents all. Happily free of pronouncement, the stand-alone works ignore pedigree and provenance and the installations are not curated to teach or transform. 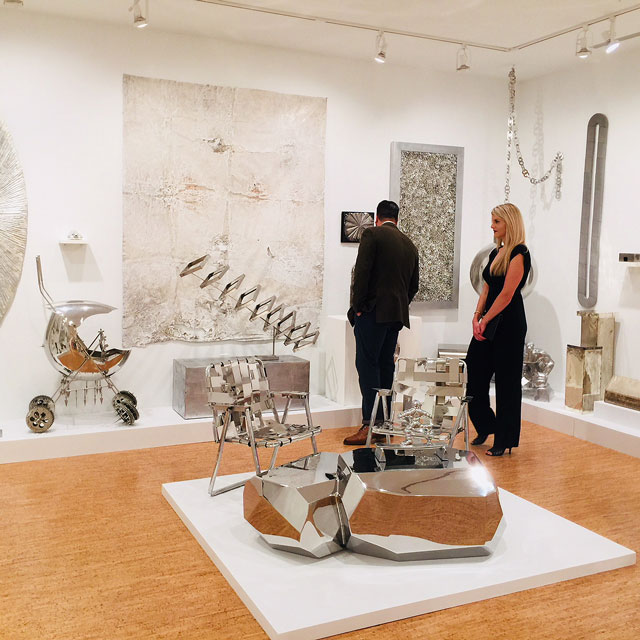 In the Silver Room, Michael Brown’s hurricane-bashed chairs speak to luminosity not doom. In the Food Room, packaged white Wonder Bread messages: “Let’s cut it open and slather on peanut butter.” Comestibles may not convey gravitas – indeed, humour has a field day here – but lest you think them frivolous take a closer look at the artists who have addressed food – Man Ray, Kenny Scharf, Sylvie Fleury and Robert Gober among them. 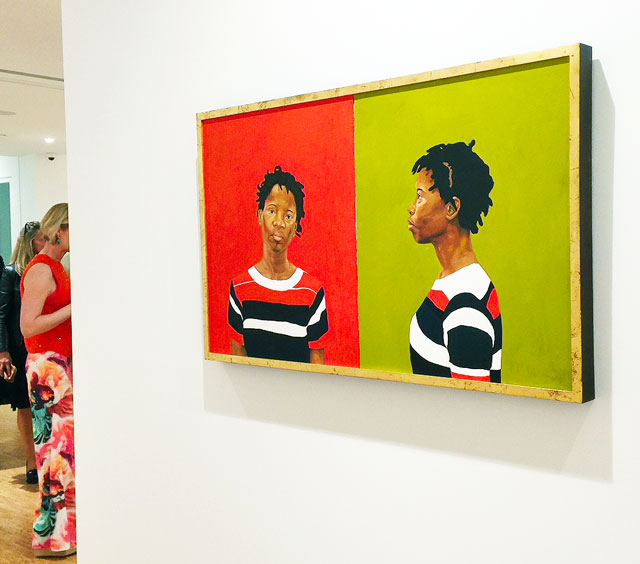 In the East Galleries, where the curators let it rip, the aha moments come from atypical work, first encounters, or a reimagining triggered by early work newly seen. A drawing of a native American by Edward Hopper? A Cindy Sherman collage? A Plexiglas work by wood-master Louise Nevelson? They are all here – as well as an enamelled Jim Dine sculpture, a non-figurative Joel Shapiro iron box and a George Rickey that does not articulate. Formally curated installations act as palate cleansers: in one corner a gorgeous black and white op art conversation between François Morrellet, Francis Celentano, Victor Vasarely, Günter Fruhtrunk and Sybil Wilson; in another, the lyrical translucence of early acrylic formalist sculpture by DeWain Valentine, Peter Alexander, Aaronel deRoy Gruber and Vasa Mihich. 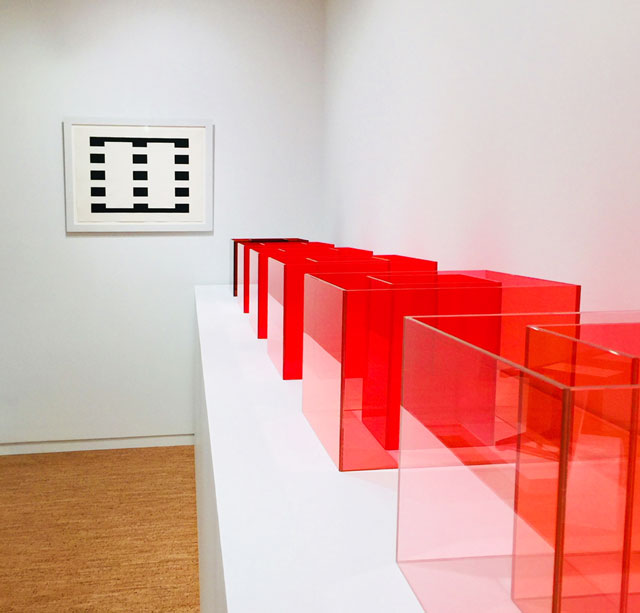 Reflected in another section, photographic self-portraits evidence DeWoody’s expanding interest in photography: in conjunction with the Norton Museum and guided by Firooz Zahedi, the noted photographer she had commissioned for a family portrait years ago, and married in 2012, she established the $20,000 Rudin Prize for Emerging Photographers, with the first award going to the South American artist Analia Saban. 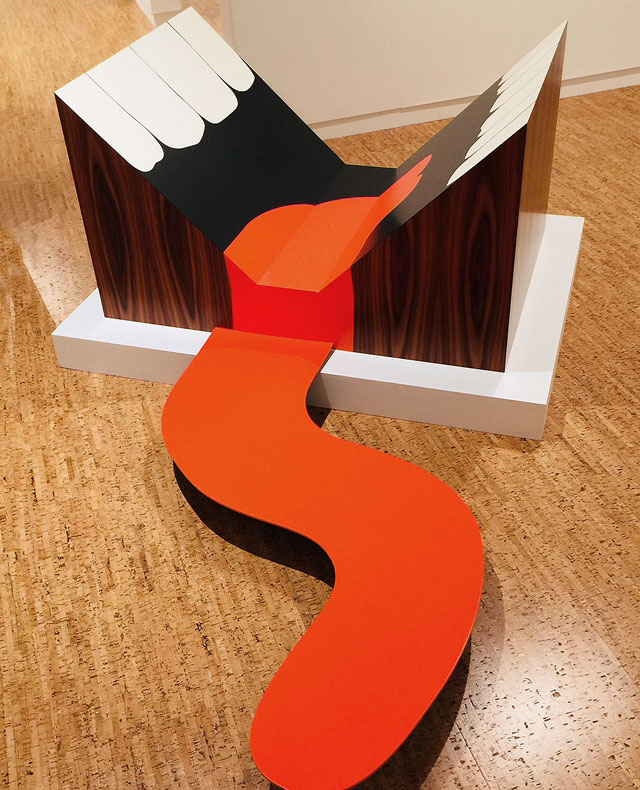 It will be interesting to see how much will be changed around for the 2 December installation; whether the themed-room concept will hold and the spirit stay unbridled. If the collection is uneven, that is its charm, and – as I see it – all of its point. This is not the greatest-hits list of so many current brand-name show spaces. It says something that DeWoody owns art by Jasper Johns, Jeff Koons, Chuck Close and Ed Ruscha, but chose not to open with it. This is collecting as adventure; go down one path, take its measure, explore another, move on, circle back, form, hone, play, sharpen, evolve.

Her designated curators are on call to give shape to it all, but that DeWoody the collector, a curator herself, has the ultimate say, is clear from the wit, serendipity and sheer exuberance of the installations – not properties generally sought from art open to viewing. Happiest is the absence of dry vitrines and the obsessive documentation of those classification systems that have been dulling the edge of so many recent exhibitions. Arguably, DeWoody’s overriding principal of building on what appeals to the self-trained eye itself constitutes a system – one that I am hopeful will change the direction of the glossy private show spaces that are springing up wherever a rising economy is enabling the luxury. 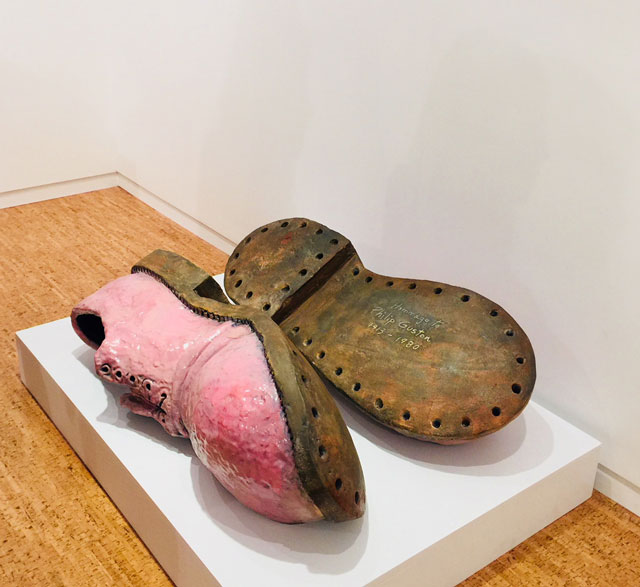 Countering the deadening one-upmanship of “my brand-art show-space is bigger than your brand-art show-space”, The Bunker is closer to a studiolo than a vanity museum, more an intimate conversation than a formal display. Named for its street, not its owner, and cosy, not grand, it introduces the idea of collecting as a shared joy, of a show space as an oasis of delight and of a destination exhibit as ennobling its environs, be they town or resort. That it is open for now by appointment only is hopefully but a holding pattern for tomorrow; given the tremendous response from the community, it is difficult to believe that arrangements won’t be made for more public viewing. 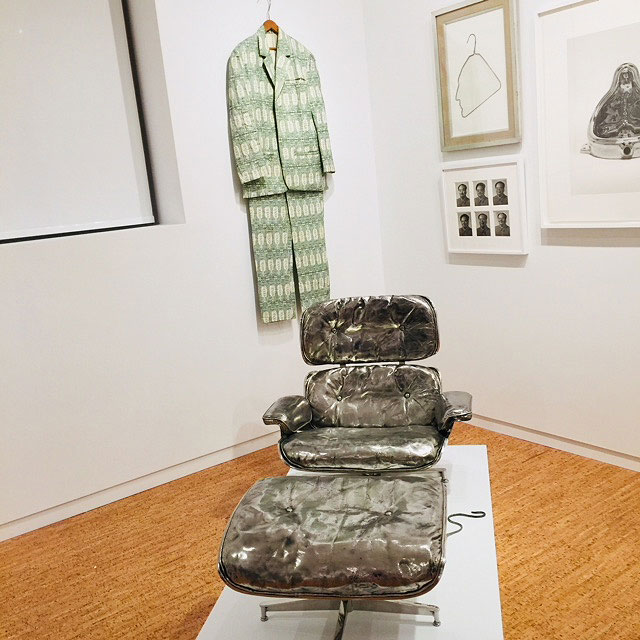 • Bunker Artspace is at 444 Bunker Road, West Palm Beach, Florida. It is currently open only on Thursdays, by appointment only. 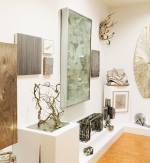