It is a fine New York moment for California. For no reason that art-worlders can explain, six of Los Angeles’ slow-to-emerge, mid-60s-generation artists have taken over major venues in the city and, with no competition from West Chelsea’s summer shows – the majority held over from spring – are holding court like rock stars.

To explain their divergence is to reveal their commonality. All trained as painters, some studied together, some hung out together, and Irwin, Price, Foulkes, Ruscha and McCarthy came on the scene with solo shows at LA’s famed Ferus Gallery. Their work split apart on methodological and intellectual lines. Turrell, Price and Baldessari investigated colour; Irwin and Turrell stripped away matter to leave only light, then strategised matter and optics to convert light to a spiritual material; Price and McCarthy explored the pathology of deviant sexuality; and Foulkes and McCarthy worked through performance art to skewer the Mickey Mouse/ Barbie Doll idols of American innocence.

It is wondrous to be able to visit, in the span of a New York subway ride, the mature work of all six, and wondrous too, that with the exception of Price, who died last year, all have more shows in the pipeline (if Turrell’s herculean Roden Crater can be considered a show) that will carry their concerns forward. One might think the biggest draw would be the scatological material delivered by McCarthy’s ‘WS’ at Park Avenue Armory (the fact that admission is restricted to those over 17 years old would itself seem like honey to bees), but on the three occasions I visited, attendance was scant and the comments I overheard were more “ugh” than “wow”. I have not fully worked out why my own reaction was a yawn parsed by a double “ugh”. Possibly, it is because McCarthy first erupted in the public consciousness with a vocabulary of shock already at full gallop, leaving himself nowhere to go but a larger format. Certainly, it is because the unremitting assaults on orifices and eardrums of suburban rooms harbouring dark secrets, two myriad-screen videos showing Snow White performing fellatio, and the plasticised libido of a creepy fake forest, which together swell like a tumour in the Armory’s great belly, lose all sexual power through positioning (inadvertently?) the viewer as analyst. The attendant show at the downtown Hauser & Wirth feels like an add-on; more videos, more violations. For those uninitiated into McCarthy’s lifelong preoccupations with burlesque debauchery, the verdict comes quickly – the artist has serious issues. More fatefully, the noise and unyielding flirtation with porn leave the viewer exhausted and demoralised.

More compelling, if no less easy on the eye, is the Foulkes retrospective at the New Museum. Very much the rebel artist, albeit a rebel with a cause, Foulkes baited critics with his cross-discipline talents. He had a rock band, played on a music machine of his own devising, painted, assembled found materials, channelled Surrealism and manhandled Pop. But the seeming chaos of his work earned him respect in the artworld by staying on message. His wild performances, serial send-ups of Mickey Mouse, and bloodied bewigged politicians were stomach punches to the gut of an America inured to the fallout of political injustice and elective war. To revisit salient pieces such as his self-portrait as witness to the American Nightmare – a highpoint of magical Surrealism – is to rattle any lingering pride in the achievements of our compliant culture.

The show to cleanse the palate is the shining retrospective of Price at the Metropolitan Museum, partly for its teaching moment of how to create a world of weird and bring your audience with you through a mastery of form and surface; partly for the seamless transition from craft to art achieved with clay wrestled into avatars of the half-conscious; but, above all, for its uncanny beauty. The only obvious relationship of the early work – teacups skewed into small structures by contrasting colours and geometrics – to the bulbous, smooth-skinned bioforms of the later years is their complex ambiguity. (To the question: are they craft or art, Price once famously answered, “Yes”). The obvious geometry of teacup is vessel, handle and the accessory round saucer, whereas a Price cup is an invitation to play with planes and angles, much like the exercise for a Frank Gehry building, which gives the frame that Gehry has designed for the show’s grand finale piece a poignant significance. The evident smoothness and solid colour of Price’s later bioforms is belied on close inspection by a skin built with up to 70 layers of acrylic paint, which is then pocked, cragged and resurfaced with cotton buds and deep sanding to allow the latent colours to glimmer through. Even the trophy piece commanding Gehry’s intervention, a giant charcoal slug curled back on its swollen self, broadcasts such an essence of dark greyness as to irradiate the space built for it.

Baldessari, showing at the Marian Goodman Gallery with 11 works from the late 80s that comprise three installations, is a feast for the eye but a Mensa puzzle for the mind. It is useful to set out with some prior knowledge of the artist’s intentions, expressed as succinctly to the press as in the classroom he has influentially presided over for decades: “I was trying to find out what was irreducibly art,” he has said of the lettering on canvas spelling out such enigmas as “Pure Beauty”. “I do not believe in skewering the bourgeoisie” relates to his jokester reputation for poking fun at the establishment. “A photograph and a painting are essentially the same” explains his interchangeable use of the two techniques in a single work. Armed with these mission statements, you will immediately understand that whatever meaning there is in the juxtaposition of polar bears, camels, movie stars and burning man is up to the viewer to figure out, but also up to the viewer to not figure out and just play with, as one might with images cut at random from magazines and thrown like darts at a wall. Still, if you can stay still in front of each installation to give it a measure of viewing time, you will make out a relevance between the elements of each work that, if not the artist’s intention, will make satisfying sense. Whether you relate the shapes of dwarf and rhinoceros to each other and to the shadow subsuming both, they serve the larger purpose of making you think about the essence of rhinoceros, conventionally too-short person and a shadow that seems cast by one, but not the other. At the least, they serve Baldessari’s jokingly serious purpose of making the viewer think at all.

Thinking is discouraged in the distilled world of visual perception. Skrim-Veil, the Irwin installation at the Whitney Museum is like a psychic cleansing. Step out of the lift on the fourth floor and you might walk back in, as many have done, thinking the room is bare. In fact, it has been rigorously configured to the specifications laid down by Irwin in 1977, when this defining work was commissioned for this very same space, and its art-for-art panache serves as a swan song to the Whitney’s relocation downtown. You will need to honour the commitment of time demanded by the investigations of this pioneering artist in order for the retina, and thus the brain, to adjust to the perceptual realisation that is intended here – namely total immersion in the primordial conditions of space and light created by a skrim hemmed with a black bar that bisects the 117ft-long room; a black line that defines the back wall; and the summer light that filters through architect Marcel Breuer’s rectangular window. That’s it, but that’s everything. As with all illusion become unshakable reality, the after-image is as marking as the moment of discovery. Indeed, so powerful is its impact that, whether intentional or not, there could not be a greater harbinger of the nostalgia factor that will accompany the Whitney’s historic relocation.

The show to end with, because it serves as an apotheosis to the bared souls lying on the museum floor to view its oculus straight up, is the Turrell light installation that irradiates the entire Guggenheim. Only those fortunate enough to have seen his Whitney show of 1985 will be prepared for the sophisticated optics in service of illusion because, since then, the reclusive artist has not ventured much beyond the celestial confines of the crater he is shaping to view cosmic events that recur every 12, 20, 50, or 1,000 years.

The dominating work, called Aten Reign in half-homage to the sun god that Pharaoh Akhenaten imposed on Egypt in the 14th century BC, is not equivalent, or even parallel, to those concerns, in that Turrell’s gigantic telescope is created from an existing structure, manipulates artificial light and is trained not on the sky but on the mind’s eye. But what a structure! What light! His transformation of Frank Lloyd Wright’s Guggenheim rotunda is an  indivisible and immutable collaboration between Wright and Turrell. The only wild element is the mind’s eye, because it is that of the viewer. Wright’s ego may not have approved the total inversion of his concrete crater because it is so successful; white plastic cocoons the five levels, sheens the exhibition walls and leaves the famous spiral walkway exactly that – a tempting halogen climb (don’t bother, though – the hour-long line at the trail’s end leads to a dispiriting bust of a viewing experience that requires an ocular adjustment of 30 minutes but the guards allow you only five). “We’ll have to fix that,” Richard Armstrong told me ruefully. Well, yes, but how?) No matter,because the main event is all. Lie or stand at its centre and you will be enveloped by Turrell light. The experience of its bleeding all around you through every gradation of a waking day is less one of immersion than suffusion. Inversion pertains, too. Just as you watch the fairytale pink of rising dawn impregnate your white shirt, you feel it seep into your pores. Just as you surrender your “self” to the silver grey of dusk, you feel sucked into its vortex. Is the experience diluted by the crowds? Well, of course. But there is no option but to brave them. Should you not able to experience Roden Crater (thus far by invitation only) this show may be your last chance to see a powerful work by Turrell. Such an effort will not be repeated any time soon by a museum, nor may the force be with Turrell two decades on.

Fortunate enough to have entered the piece in its grey iteration, I chose to leave by it too. I thought back to Price’s charcoal sculpture. While its materiality has no place in the Turrell vocabulary, it speaks to their commonality – an obsession with taking a visual idea to its extreme – and explains, in great part, the spell that West Coast artists are casting on us, at last. 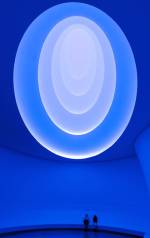 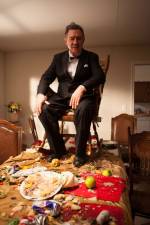 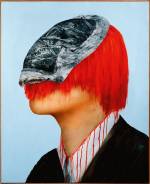 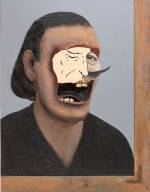