The Art of Seduction

The Art of Seduction

Seduced: Art and Sex from Antiquity to Now
London: Merrell, 2007

This book is the catalogue of the current Barbican Exhibition in London. It forms a substantial volume, divided into ten chapters, covering different specs of the subject.

The most interesting is that of Professor Martin Kemp, entitled 'Divine Love and Carnal Pleasures'. He ranges enticingly from Peruzzi's 'The Rape of Ganymede' to 'Naked Woman Approaching a Man' by Giulio Romano and onto Agostino Carracci's scene of five copulating couples cavorting in a wooded grove entitled 'The Golden and Age', embellished by loosened drapery and well-fulfilled Cupid figures. The Romano presents woman as the proactive partner, addressing a startled male. Or is he actually being subjected to rape? The historical convention seems to relate rape to an act by males upon females, while the act of seduction is perfected by women on males. 'The Golden Age' Kemp advises the reader (and viewer), was an 'undefined era of prelapsarian pleasure before sex was condemned as a sin and bore it with buckets of guilt'. Fragonard is placed in pole position with his famous painting 'The Beautiful Servant (Pointless Resistance)' - a seemingly joyful exercise revealing the minimum of flesh, seductively wrapped, or unwrapping, as distinct from the explicit scantily clad couplings exhibited by Jeff Koons and partner. Restlessly and interminably the whole study of seduction as mooted pans through several centuries.

Marina Wallace contributes four chapters. In 'Exposures', Chapter 5, she focuses upon the formative role of early photography and the exchange of ideas between painters and pioneer photographers such as Alexis-Louis-Charles Gouin in France. The interaction, for example, of a photographer, such as Ingres, and of Nadar with the socially conscious painter Gustave Courbet, and the overlap of this work with the ideas of the romantic writer Pierre Louys, picks up on lesbian and broader classical themes. Wallace here comments tellingly:

Surrealist artists were a clear case here. In a further chapter, 'The Pleasures of Reading', Catina Albano shifts focus onto the role of the written text in collusion, describing sexual pleasures and episodes running from Pietro Aretino (early 16th century) right through to Cleland's famous romping epic series, Fanny Hill (1748-1749) and the contemporaneous 'Les Liaisons Dangereux of Choderlos de Laclos'. Clearly important, if ancillary, in the realm of acute titillation, text could prove a vital catalyst, at least that is until the 20th century video revolution.

The essay by Joanne Bernstein, 'The Artist and Muse', consolidates the role of 'inspirational sex' and reaches an appropriate climacteric with Picasso's 25 etchings made at the age of 87 of Raphael and La Fornarina, inspired, it is said, by two Ingres paintings (which he would have seemingly seen at the Ingres Centennial retrospective at the Petit Palais, Paris in 1968). Picasso's delicate treatment of the joyful interaction of the sexes is deemed both explicit and comical by the author. This perhaps is indeed a rare conjunction within the overall theme of 'Seduction'. In many works there is a marked absence of wit and humour.

The exhibition organisers have chosen a difficult field, notorious for its perils and pitfalls. They have contrived to select pleasurable works. And yet to the 21st century seasoned and jaded eye, boredom and monotony soon looms. The contributions by Professors Kemp and Wallace compensate for this stretch by providing an intellectual and art-historical framework in a very short frame of time and space. The book is free of the subterranean gloom that permeates the physical spaces of the Barbican Gallery, and yet it falls short of a comprehensive appraisal, always on the edge of losing clear focus.

Will the exhibition provide British schools with an educational resource? If not, the catalogue may fall short of youthful expectations as much as of middle-aged titillation and also provide the local authority with a dilemma over the legal meaning of 'explicit'. It still ends up on the top shelf. On the positive side, the venture into seeking out the role of text, 'The Pleasures of Reading' by Caterina Albano, opens up the question of the potential of literature to activate 'still' imagery. This might be an avenue for further research. Again, video leaps ahead in the interim, as did 'blue movies' in their day. 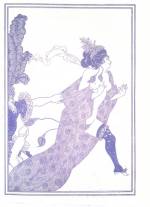