This year’s Armory Show offered viewers an impressive selection of works by a wide range of artists from around the world. Curated sections emphasised performance and installation, as well as interactions between art and technology. The enduring influence of postwar art and the historic avant garde was abundantly clear in the works from the end of the last century, as well as in more recent creations 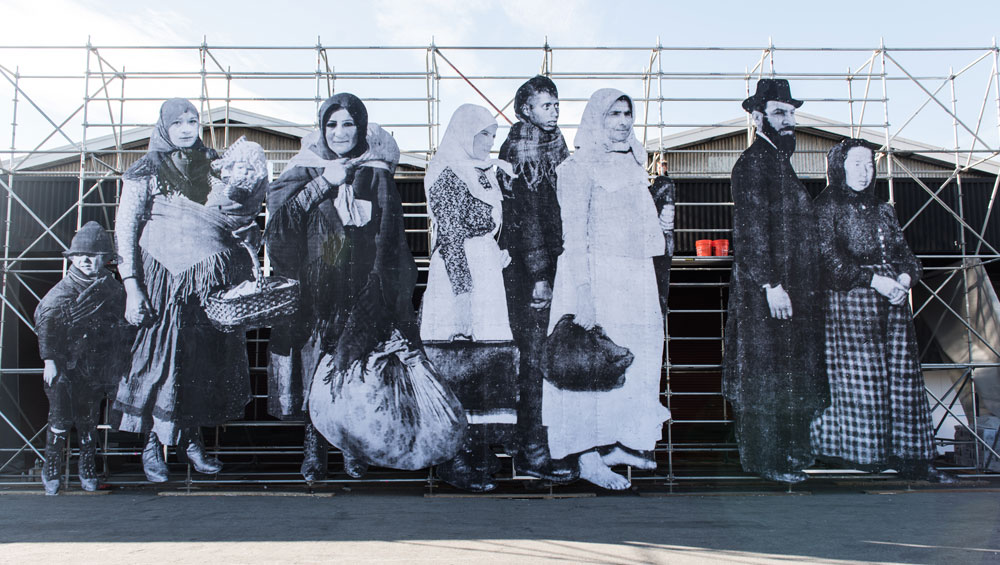 The Armory Show, as usual, dazzled with the sheer quantity and variety of art on display. The images it brought together were diverse and complex, spanning centuries, cultures and generations of artists. This year, the fair hosted 198 galleries representing 31 countries. Almost a quarter of exhibitors had never taken part in the Armory before. The organisers made a concerted effort to keep this flow of visual information manageable, limiting the space to two piers on the Hudson river. Since it is a place to sell and acquire works by some of the most coveted contemporary artists, one of the markers of the fair is its accessibility to the public. Even with the $55 (£40) entrance fee, on the weekend of its run, the fair was filled with large crowds moving through gallery booths and forming long queues outside, waiting to get in. Security personnel were kept busy, directing the flow of human traffic in, out and between the piers.

For lucidity of presentation, the fair was divided into sections, which allowed viewers to orient themselves in a maze of art. Two of them – Platform and Focus – were organised by outside curators. The Platform section, curated by Jen Mergel, which staged 15 large-scale and site-responsive works throughout the fair, stood out for its prominent installation by internationally acclaimed artist JR, whose blown-up images of immigrants arriving at Ellis Island greeted visitors entering the fair. JR made his name by drawing attention to the overlooked, understated and frequently lost immigrant, worker and the common person. His work shared the spotlight at the fair with Wilmer Wilson IV’s Measures Not Men (2017), a powerful monument to a painful and relatively recent history of lynching black people in the US. 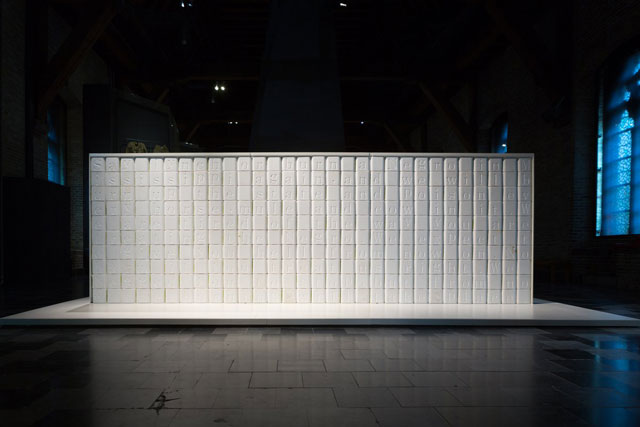 Wilmer Wilson IV, Measures not Men, 2017. Photograph courtesy of the artist and Connersmith.

A third project that grabbed attention was a remarkable performance by Alex Schweder and Ward Shelley, an architect-artist pair who recently came to prominence for their projects of what they call “performative architecture”, which hover between science fiction and reality and appear to test the limits of people’s adaptability to their environment. 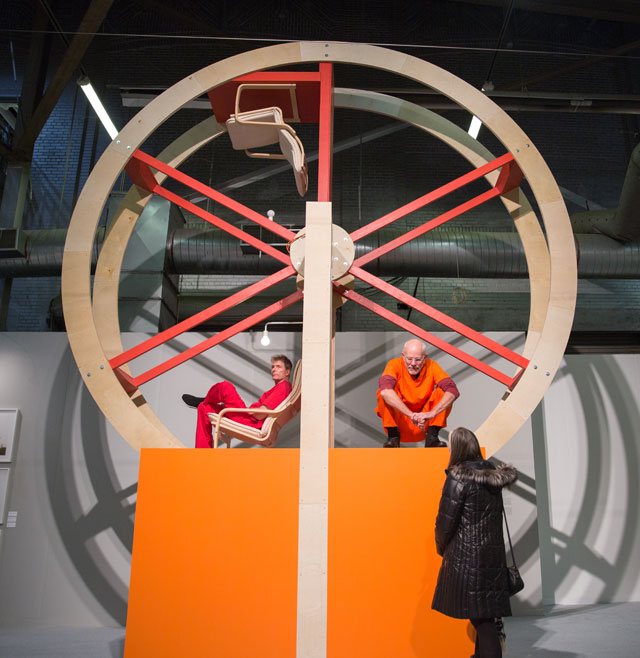 At the fair, the duo built and performed My Turn (2018), a giant wheel with two chairs fixed at opposing sides of the wheel’s curve in such a way that only one person can remain seated at one time. This work is a variation of In Orbit (2014), a similar wheel equipped with household accoutrements, in which the artists had to move in tandem in order to maintain their own fragile balance and that of their living structure. Schweder and Shelley’s work is a powerful visualisation of the interdependence of our lives, no matter how self-sufficient we appear to be.

The Focus section of the fair, curated by Gabriel Ritter and located on Pier 92, showcased artists exploring the interaction of art and technology, particularly in relation to the latter’s effects on the human body. For this section, Ritter chose 34 artists represented by 28 galleries. This section was coherent and engaging, despite an occasional work lacking a connection to the stated purpose of the section. For example, it was difficult to see any explicit link to technology in the works of Hermann Nitsch, a celebrated member of the Viennese Actionists, who references physicality and fragility of human body in every one of his blood-infused paintings, installations and performances. It can be argued that of all traditional art media, painting may be the most resistant in reflecting the evolution of art and technology, since its very mode of creation is codified according to a specific convention of an artist making a mark on a flat canvas. 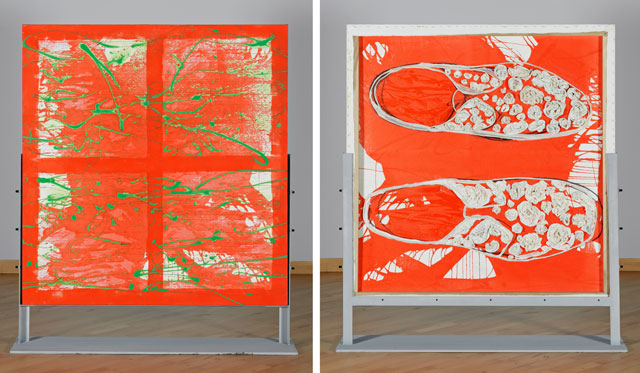 Dona Nelson’s paintings, shown by Thomas Erben Gallery, however, explore the limits of this convention. In them, the artist reveals the process and materials of the painting’s creation, be it paint, canvas or thread, by showing both the recto and the verso of a painted canvas. 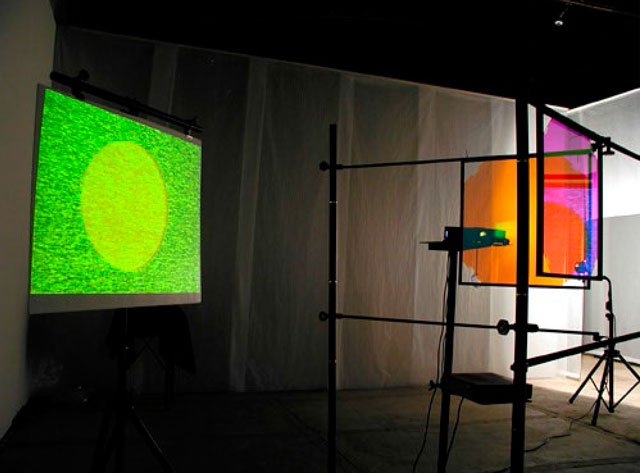 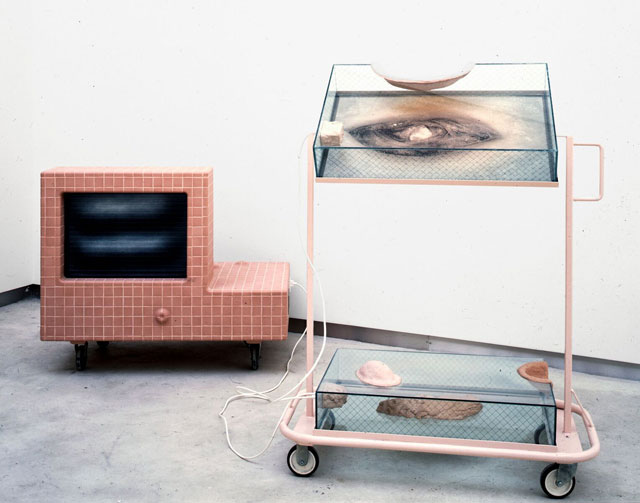 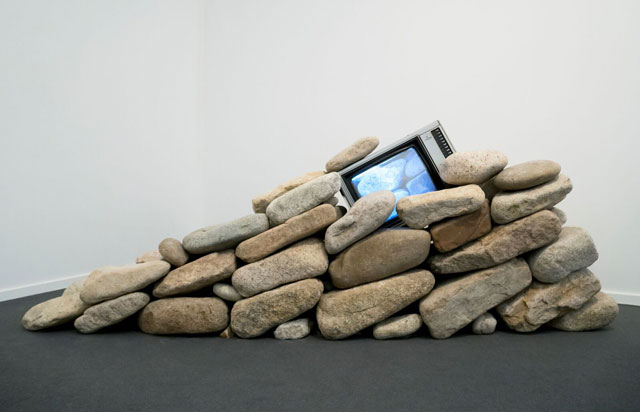 Works in other media made the link between art and technology more unambiguous. Apart from obvious art historical precedents, such as Woody Vasulka’s video and audio installations at Berg Contemporary, there was a strong contingent of artists of Asian descent who turned their attention to technology early in their careers, among them Tishan Hsu, well-known on the New York art scene in the 1980s, with his uncanny biomorphic objects that look as if they have been taken from the set of a spooky sci-fi movie; Park Hyun-ki, Korean pioneer of the exploration of technologically inspired art; and Patty Chang, a contemporary artist from San Leandro, who showed part of her Wandering Lake project at Shanghai’s Bank Gallery. In a video, photographs and manufactured objects related to this project, Chang mournfully referenced her sentiments concerning transformed and disappearing things – natural, such as lakes and whales, and cultural, such as ships and people. Her Glass Urinary Devices resemble transmogrified water bottles warped into strange shapes by unknown forces. In her striking 2016 photograph Configurations (Bread), Chang conflates the morphology of the male and the female in a striking image of herself made phallic through her art, using a piece of bread as a made-up penis. 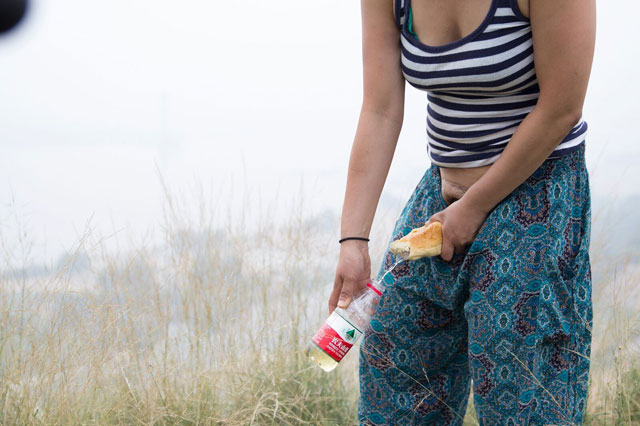 Lawrie Shabibi gallery features Iranian artist Shahpour Pouyan, who built a forbidding wooden structure that resembles both a guillotine and a trebuchet – devices that were historically used for killing people. Pouyan fused the two structures in such a way that it was difficult to distinguish where one ended and the other began. At the same time, he suspended a Corinthian capital, top of a column, from the centre of the sculpture, making a reference to the culture, which produced objects of beauty and tools of destruction. 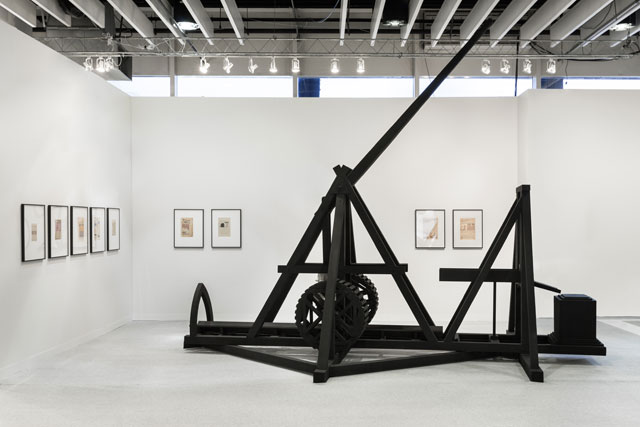 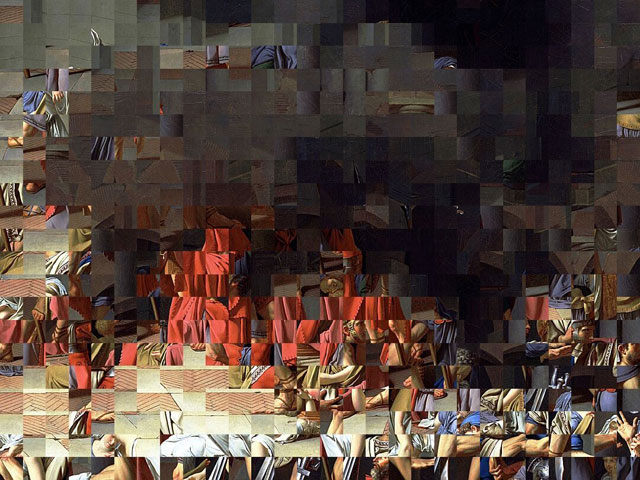 Rashid Rana from Pakistan, represented by Leila Heller Gallery, showed large C-prints of classical paintings with oriental subject matter and opulent still-lives that have been rephotographed, overlaid by a digitally produced grid and partially obscured. Only certain parts of original representation remain visible, while much of the photographic surface is covered by displaced pixelated content. Visually commenting on displacement of a certain representation tradition, Rana succeeds in conveying the sense of poignancy at the passing of an era when images were easily readable.

The other three sections of the fair – Galleries, Insights and Presents – are divided somewhat arbitrarily, according to the chronological age of the gallery or of the art it displays; where Insights focuses on artworks made before 2000 and Presents shows businesses that are less than 10 years old, and Galleries constitutes the main section with the majority of leading art businesses that deal in contemporary art. 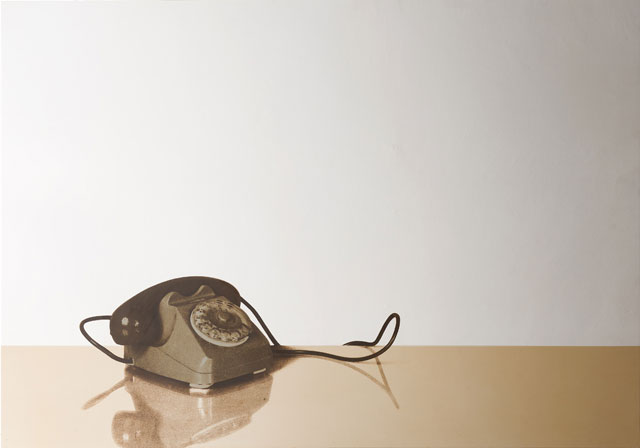 The Insights section of the fair, adjacent to Focus on Pier 92, was a good place for a somewhat scattered lesson in art history, where works by well-known postwar artists held sway. There, there were a few memorable highlights, such as mirror paintings by Michelangelo Pistoletto from the 1970s and 80s, shown by the Repetto Gallery; striking portraits and still-lifes by Wayne Thiebaud, shown by Allan Stone Projects; small paintings by Gerhard Richter and Alexej von Jawlensky in the Galerie Ludorff’s booth; and Yayoi Kusama’s glittering collages, reminiscent of precious stones, shown by Omer Tiroche Gallery. 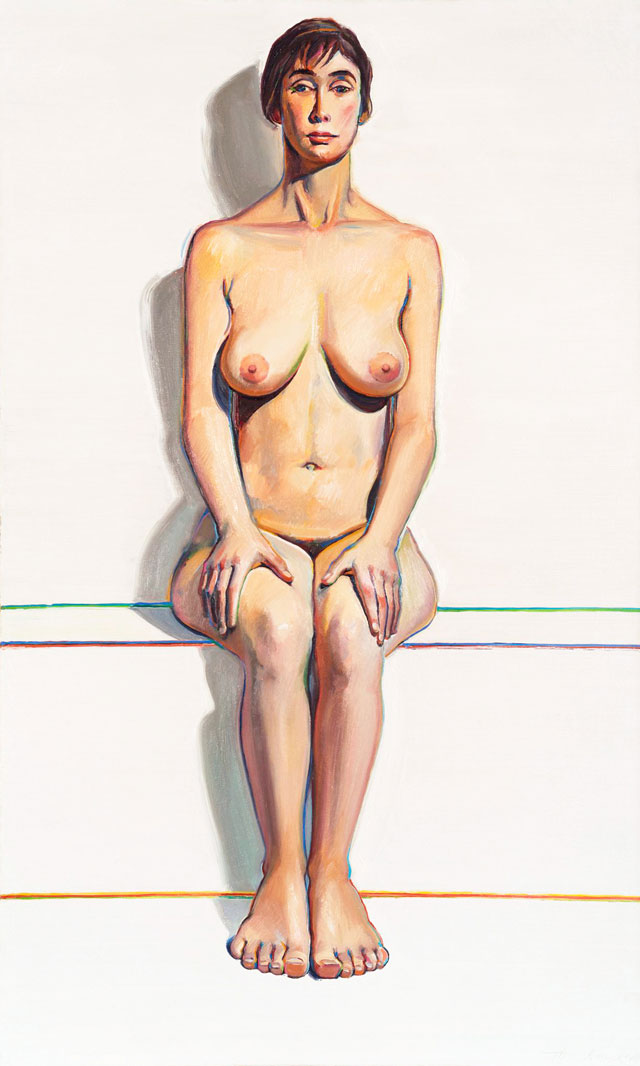 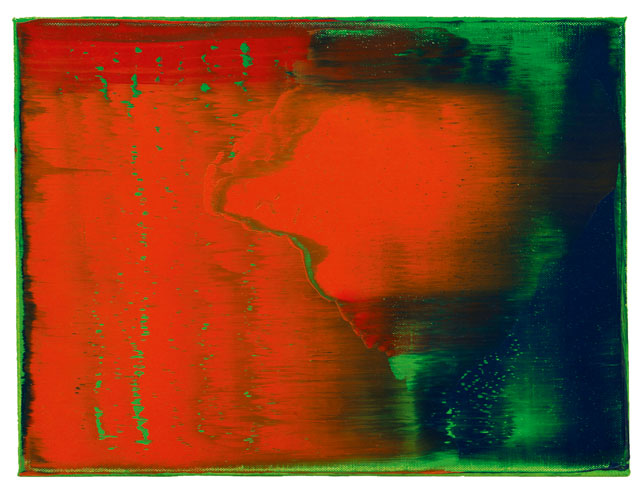 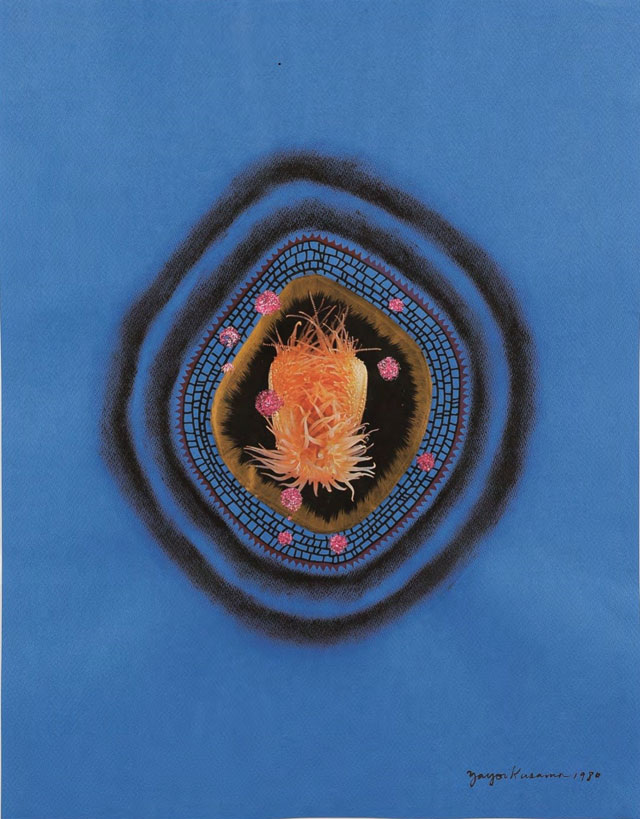 Larry Gagosian, who returned to the Armory after a long absence, presented the late work of a pioneer of video art, Nam June Paik. Occupying a central location in the main section of the fair, Gagosian honoured the Korean-American artist with an impressive showcase of his work, made shortly before his death 12 years ago. 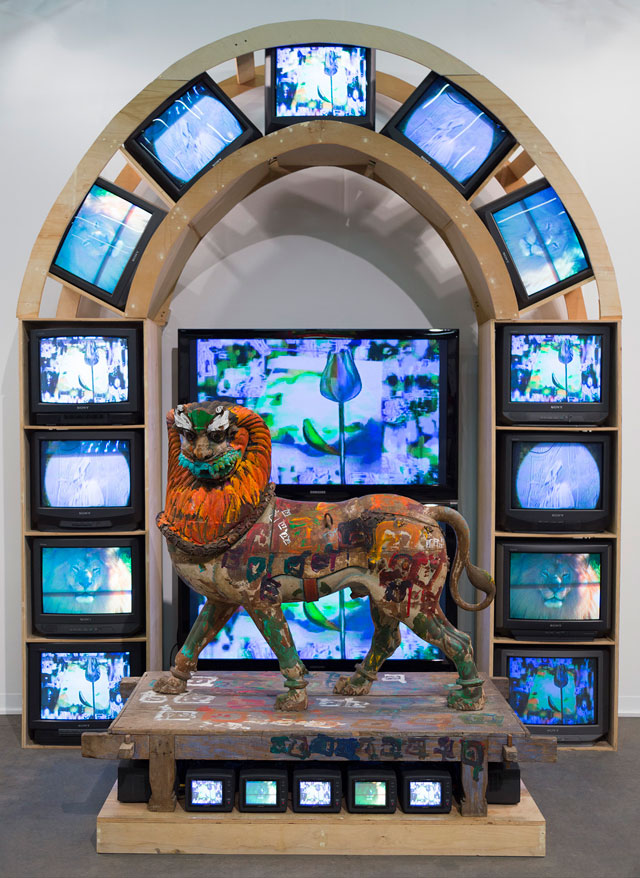 The pride of place was afforded to Lion (2005), an imposing formation of plasma and cathode ray tube video monitors with flickering screens arranged in the form of an arch with a wooden lion on top, gaudily covered in graffiti. Apart from this central work, there were multiple pastels and drawings, mostly from 90s, and a couple of one-channel video installations on old TV monitors, also covered in graffiti. This display looked surprisingly vivid and invigorating, reminding us of the sheer power of the ostentatious bad-boy image that Paik cultivated. 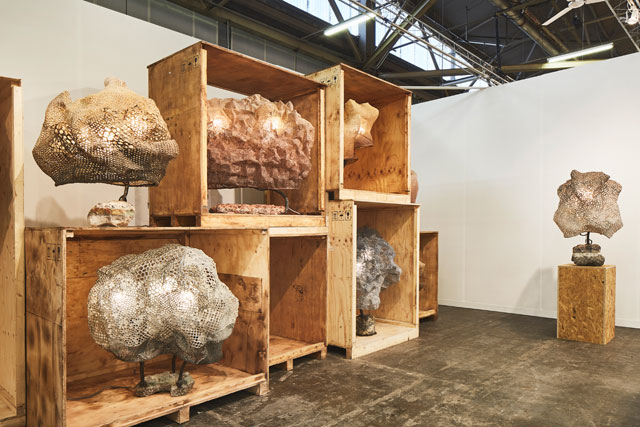 Among other booths, Galeria Plan B based in Cluj, Romania, and in Berlin, exhibited an impressive array of artists, including Ciprian Muresan, who showed reproductions of 12 pages from the book Malevich and Film. Displayed horizontally on a low platform, his monochrome reliefs of the canonic works of suprematism, a leading movement within the Russian avant garde, produced yet another soulful monument to its legacy. Another highlight of Galleries, the fair’s main section, was Carpenters’ Workshop Gallery’s display of designs from Spanish artist Nacho Carbonell. They showed Carbonell’s abat-jours for lamps, which could be called “light sculptures” as they are meticulously made by hand to create diaphanous, amorphous shapes covering the lamps. Their apparent lack of structure is deceptive, though: the lampshades are made of wire mesh, a material with a degree of resistance to destruction. Carbonell’s desire is to impart organicity in his work, and the abat-jours resemble oversized Bonsai trees, sprouting out of concrete rocks. 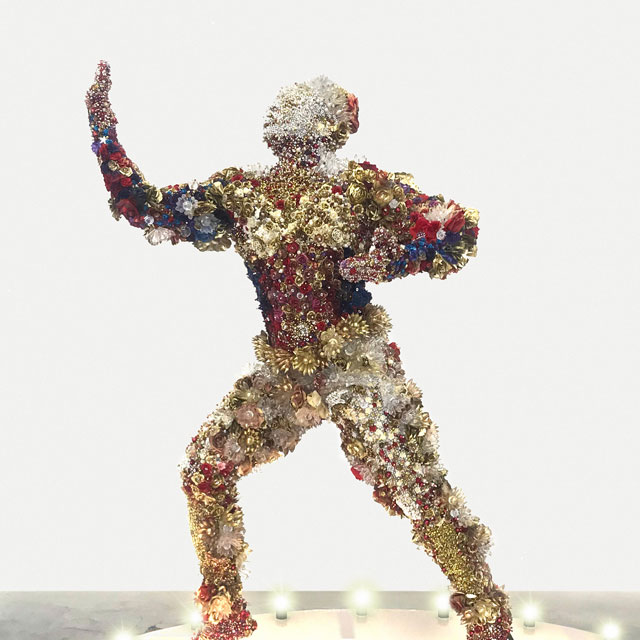 Then there was WhatiftheWorld from Cape Town, which stood out among the new galleries section, thanks to the work of South African artist Athi-Patra Ruga. Ruga creates objects that reflect his quest to investigate tradition, history and his own identity as a queer black man by creating his own myths on the basis of existing ones. Each of his woven tapestries, for instance, introduces us to a story of African beauty and resistance, which entices us by its compelling iconic presence. One of the highlights of Ruga’s works was the sculpture Proposed Model of François Benga (1906-1957), in which the artist honours a Senegalese expatriate dancer who lived in Paris and New York among other places, performing with Josephine Baker and taking part in the Harlem Renaissance. In his obsession with decoration, Ruga studded the foam sculpture of the dancer with thousands of shiny pins, artificial flowers and jewels, creating a memorable image of a body alive with movement, passion and desire. This impressive work is an encouraging sign of the strength and vitality of contemporary African art, which is able to use tradition to address important issues in today’s world.

This year’s Armory Show offered viewers an impressive selection of works by a wide range of artists from around the world. Curated sections emphasised performance and installation as well as interactions of art and technology. The enduring influence of postwar art and the historic avant garde was abundantly clear in the works from the end of the last century, as well as in more recent creations.