This year, in addition to its home-base in Kassel, dOCUMENTA (13) has satellite venues in Kabul, Alexandria/Cairo and Banff. The exhibition’s curator, Carolyn Christov-Bakargiev, stresses that she is not interested in deconstructing borders or creating a sense of utopian harmony between various times and physical locations, but instead seeks to draw attention to the importance of a specific place. Christov-Bakargiev further explains that each site (and in turn the artworks exhibited there) explores four different states: under siege, in retreat, in a state of hope and on stage. Each of these states is important because it represents a turning point – though the direction that follows is unknown.

In Kabul, dOCUMENTA (13) started well before the opening of the main event in Kassel with a series of seminars inaugurated in June 2010. While many of the works of art that have come out of the Afghan Seminars are on view in an exhibition in the Bagh-e Babur or Queen’s Palace, Kabul, the Seminars also have a substantial presence in Kassel in the Oberste Gasse 4 or the Old Elizabeth Hospital. In the first rooms of the Oberste Gasse the white-tiled walls have been covered by the Afghan artist Abul Qasem Foushanji, in graffiti in both Roman and Arabic script, with phrases as various as “Let’s dance”, “Peace sucks” and “I will never forgive you motherfucker!” Sometimes comical or cynical, even aggressive these phrases shift between what we should say or think and what we actually feel. There is a pull between what the individual thinks and has written on a public site – the wall.

While Kabul is clearly under siege yet also in a state of hope, retreating and more than almost anywhere in the whole, on stage in the media worldwide – what is the efficacy of organising artistic projects in war zones of occupied territories? Does it make us shameful voyeurs? Does it allow us to test the theory that art can intervene effectively and decrease violence? Does it normalise the outrageous events?

Interestingly, the first seminar in Kabul was on documenta and its history, a point of reference that in many ways makes the choice to engage with Kabul as an alternative site more relevant. In 1955 Arnold Bode’s first documenta was an attempt to reinstate German contemporary art into the history of European Modernism, a link symbolically destroyed by the Degenerate Art exhibition in 1938–39. Bode was not trying to re-write history, but to reconnect it, to see it from a different angle. This idea of “reconnecting” or seeking a different angle is helpful when addressing documenta’s current engagement with Afghanistan. This idea of finding a continuity with history finds its literal manifestation in the work of Mario Garcia Torres who “revisits” the dematerialised conceptual projects of artists from the 1970s.

In 1971 the Italian artist Alighiero Boetti visited Kabul, and during this trip secured a venue for a hotel, known as One Hotel, which the artist inhabited and ran until 1977. During the 1970s Boetti also worked with local Afghan women who produced a series of embroidered tapestries according his designs. The first of these tapestries, Mappa, was intended for dOCUMENTA 5 (1972), but the tapestry was never exhibited. In 2012, Mappa is included as a piece of documentary material selected by Garcia Torres’s as part of his larger project devoted to relocating Boetti’s One Hotel in Kabul. Beginning with Share-e-Nau wondering - A film treatment (2001), Torres began his search through a series of fictional faxes in which he corresponded with the now deceased Boetti about a mythical trip to find One Hotel. In 2010, as part of his project commissioned for dOCUMENTA (13), Garcia Torres travelled to Kabul where he managed to locate the original premises of Boetti’s One Hotel. This trip is presented in Kassel through Have you ever seen the snow? (2010), an audio-essay accompanied by slides of archival material and images of One Hotel from the 1970s. Boetti inhabited and ran One Hotel until 1977, but the subsequent years of war in the region had led many to assume that the place had been destroyed. Garcia Torres’s search for One Hotel was thus a quest for a ruin, a romantic remnant of a previous era that bares the scars of the present in its decay.

In 2007, the artist Michael Rakowitz began an ongoing project to rebuild more than 8,000 artifacts still at large after the looting of the Iraq Museum. This project, while resuscitative is also about the failure of rebuilding history - the surrogates of destroyed pieces in their current present poignantly highlight the absence of the original. In May 2012 Rakowitz led a seminar for dOCUMENTA 13 with the restorer Bert Praxenthaler and the Afghan sculptor Abbas Allah Dad on stone carving in a cave on the mountainside where the Bamiyan Buddhas once stood, just outside Kabul (video documentation of the seminar is screened in Kassel). In the site of these ruins, Rakowitz was not interested in rebuilding but in re-introducing the art of stone carving into the local Bamiyan community as a recuperative act, reconnecting a tradition instead of trying to fill a loss.

Afghanistan’s recent history is chaotic, fraught by periods of civil war and successive military occupations. Afghanistan’s history and our current understanding of it was considered in the seminar Archive Practicum (March–April 2012) held at the Afghan Film archive, Kabul. The Afghan Film archive includes thousands of reels of film that cover Afghanistan’s twentieth-century history. Tragically much of their film collection was destroyed by the Taliban leaving only fragments of newsreels and bits of documentary footage to give a visual angle to this history. Several of these fragments were on view in the Obserste Gasse, where we can see men moving through the streets of Kabul and even the old buddha statues at Bamiyan. These old clips are tantalising, showing us pieces and places of history we can no longer visit or inhabit. These bits of old film are simultaneously ruins and our most direct link to history we can no longer encounter. By attempting to destroy these bits of film, the Taliban actually added to their importance as records; they are now as interesting for what we think they show us of the past and then in turn for making us question what the Taliban found so threatening in them.

A sense of disjointed history is explored in relation to the personal in Jeanno Gaussi’s project Family Stories. Brought up in Kabul, Delhi and Berlin, Gaussi has attempted to reconstruct a possible family identity made up of multiple fragments of stories and conflicting memories. In 2008 on her first trip back to Kabul since 1978, Gaussi met and enlisted the services of Ustad Sharif Amin, a sign painter who had a shop near her family home in Kabul, to paint a series of family portraits based on photographs found from old albums. In this project Gaussi works to both preserve her personal heritage and the artistic heritage practiced by Amin. But here memory is mediated by a third party - an attempt to reconnect is circumvented - asking us to question whether these images really are still a personal memory or a constructed reality.

In the first volume of the three part catalogue that accompanies dOCUMENTA (13), known as The Book of Books, the entry “Afghanistan: A lexicon” provides a fascinating history of the area. But the essay’s title also includes a caveat, warning that the writing that follows is “selective; may include myth, speculation and rumour as well as facts”. Fact, fiction and memory pervade both the Afghan Seminars and resulting works that are now on view in Kassel and Kabul. In this lexicon two very poignant although easily missed entries highlight succinctly how these three facets continue to overlap and sometimes clash in “legend” - a form of collective memory - and in “reconciliation” - an act which can only happen when people want to accept the truth. This notion that “collective memory” and “consensus” are needed to move past the legends of the past to reconcile its demons remains to be achieved in Kabul. This act of reconciling with the past is very difficult for most nations, as it requires coming face to face with trauma, not simply moving away from it. Kabul was selected as it is at a turning point, but as much of the seminars, works of art and the contemporary portrayal of the countries struggles in the media reveal, we do not know what direction the turn will take. 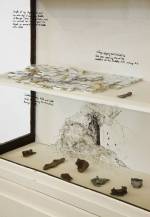