The added originality in [Petar] Milojević's technique is that by slight changes to his programming logic he can produce an infinite variety of floral textures. This seems as near 'art' as anything one has seen from computers: a poetic hint that the richness of nature and her parsimony are one and the same.

An international symposium on Computers and Visual Research was held in Zagreb in early May, sponsored by the New Tendencies movement.

It was partly the garbling of the simultaneous translation facilities that made one feel constantly on the threshold of new insights that were seldom attained. (Fortunately the papers are to be printed in bit international, a multilingual quarterly devoted to the computer and art, obtainable from Galerije Grada Zagreba, Katarinin trg 2, Zagreb, Yugoslavia.) But beyond the barrier of languages is a more serious lack of common vocabulary. The variety of different approaches to the subject is both stimulating and confusing. Here I must confess a prejudice against the approach of theoretical aestheticians, of whom there must be a heavy concentration in Germany.

The most forceful papers at Zagreb came from speakers who managed to convey that the impact of computers on art and perception is neither an esoteric subject nor a trivial one. The theme of the symposium was not apparently welcomed by the Yugoslav cultural authorities, on the grounds that it was too modern and avant-garde; and many speakers pointedly emphasized the social implications of cybernetics, automation, mass communications and the bridging of the 'two cultures'.

Among the speakers was Silvio Caccato, of the Centro di Cibernetica e di Actività Linguistiche, Milan, who has designed a model called a 'reasoning perceptron' which not only recognizes a small range of objects but can also formulate simple sentences to describe the objects' relationships with each other. The issues raised are far-reaching. Another Italian speaker was Leonardo Mosso from Turin, who spoke fluently about his ecological concept of architecture; the slides he showed were impressive and I hope to discuss his work on this page at a later date when I have received a transcript of his paper.

The symposium was accompanied, rather distractingly, by exhibitions of kinetics and concrete poetry. But there were also some computer-generated films, and an exhibition of graphics (with one or two sculptures) at the Gallery of Contemporary Art. Many of the graphics have been seen elsewhere, but there is some interesting new material (this exhibition is open till 30 August). Computer graphics are now surely well enough established as an experimental medium to call for a critical approach. Perhaps the first critical question to ask is `What in this output justifies the very expensive and cumbersome mechanical process that has been used to achieve it?' It would seem to me an inadequate justification that, for instance, the computer has been used to generate random numbers (for which one might as well use a telephone directory); or that it would have taken a human draughtsman n days to draw what the computer can draw in m seconds (which is merely putting a man out of a job). The computer must do a bit more to earn its keep.

An example of what I mean is the graphics of Petar Milojevic. They are nothing much to look at, from a conventional aesthetic viewpoint; they depict in a realistic manner the branching of plants or trees. Milojević uses the computer to generate a Fibonacci series (where each new value is half the sum of the two preceding values) to control the branching, since it has been suggested that this is how some plants grow. This technique in itself would not justify a computer, as the Fibonacci series was related to plant structures many years ago.* The added originality in Milojević's technique is that by slight changes to his programming logic he can produce an infinite variety of floral textures. This seems as near 'art' as anything one has seen from computers: a poetic hint that the richness of nature and her parsimony are one and the same.

The illustration shows a light spectacle in Kvaternikov Square, Zagreb, by Vladimir Bonacić. This works under computer-generated control, and gives a permutative effect rather like that of English bell-ringing.

I have received the first three issues of the Marshall McLuhan Dew-Line Newsletter, published in the US by Human Development Corporation and in Europe by First Run Ltd. The newsletter medium has previously been used by Charles Atlas Ltd to teach physical culture, by the Pelman Institute and the Rosicrucians to develop the powers of perception in various ways, and by analysts of the turf and the stock exchange; also no doubt by others who have identified sectors of the public which do not buy books but are thirsty for self-improvement or hot-tips.

The McLuhan Newsletter is subtitled 'An early warning system for the changing age we live in'. Each issue is prefaced with some understanding remarks as if from someone who has appreciated Dr McLuhan's genius but is able to sympathize with the reader's supposed inadequacy and bewilderment. My guess is that these introductory remarks were beamed from the master-mind himself.

The significance of the McLuhan Newsletter is in its use of the newsletter medium. No one influenced by McLuhan's ideas would think of reviewing its `content', which is in any case available much more cheaply in his published books.

CENTRE FOR STUDIES OF SCIENCE IN ART

A number of people working in London are keen to set up an organization which would consolidate the activities in art and science that have grown up in and around this city recently. Such an organization would be independent, but it is hoped that universities and colleges, especially those in the London area, will soon recognize the importance of a synthesis between art and science, and provide financial grants and other assistance. Such an organization would be neither a club, nor a launching-pad for personal reputations, but a focal point, co-operating as much as possible with such groups as the British Society for Social Responsibility in Science and the Computer Arts Society. It would be as open as possible to new ideas and new people, with no exclusivist leanings and with the minimum of rules and formalities; however, the high standards and the dedication of its members would be such as to make it unattractive to anyone without such standards and dedication.

For the sake of continuity, it seems advisable to try and develop an existing organization rather than found one from scratch, if only because the goodwill and reputation of an established organization represents a valuable investment in time, energy and money. The Centre for the Studies of Science in Art was founded (under a slightly different name) some years ago in London, and now has an international reputation. Marcello Salvadori has developed the idea of the Centre throughout the 'sixties as a practical meeting-place for science and art, with a special orientation towards architecture and environmental design. The climate of public opinion is now more favourable to the basic ideas of the Centre, which has itself been partly responsible for this change of climate. Salvadori now wishes to devote his own time to research and teaching. A small capital sum is available through private generosity to expand the work of the Centre over the next stage.

Apart from premises where people can meet, it is not yet clear what sort of independent facilities the restructured Centre should aim to provide. However, what seems to be most needed at present is an opportunity for the interchange and clarification of information and ideas. Administration should probably be kept to a minimum.

It is hoped to arrive during the summer at concrete proposals for the development of the Centre, which will be published in the form of a joint signed statement of objectives. One of the first events will probably be a one-day seminar in which a major scientific subject of wide relevance will be chosen to suggest how formal studies and creative activity can be related. Meanwhile, the address of the Centre until new premises are found is 31 Willoughby Rd, London NW3. El

Experiments in art and technology has a new address: 235 Park Avenue South, New York 10003. EAT now publishes an occasional Projects and Progress newsletter called Techne. The first number contains some notes on practical problems of maintaining exhibitions of electronic and mechanical art, including reliability statistics; also a contribution by Naum Gabo on how he made his 1920 vibrating wire, and a description of a light and sound environment by Robert Whitman recently shown in the Jewish Museum, New York.

The Power Institute of Fine Arts, Sydney, is planning to hold an interdisciplinary colloquium on science, technology and the fine arts. The organizer is Donald Brook, Senior Lecturer in Fine Arts at the Institute and also art critic for the Sydney Morning Herald. 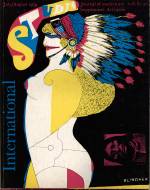 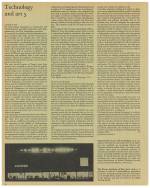