"The potential that was so evident at the 1968 ICA exhibition is still there, but the actuality has hardly advanced at all, and this is depressing. There was always a danger that the phenomenon called computer art would come to be looked back on as a fad of the 1960s..."

At the large and elaborate Computer Graphics symposium held at Brunel University, near London, in April, there were two sessions devoted to papers on computer art, and an exhibition of graphic prints to add, as the Computer Weekly put it, 'a touch of light relief'. Among hundreds of sober-suited delegates the sprinkling of art-oriented figures seemed like a troupe of licensed entertainers, surviving on the fat of a huge and flourishing industrial market. This is not the first time that art has put on the cap and bells; and we should not complain because, so far, few artists using computer graphics have come up with anything that really deserves more reverent attention.

The potential that was so evident at the 1968 ICA exhibition is still there, but the actuality has hardly advanced at all, and this is depressing. There was always a danger that the phenomenon called computer art would come to be looked back on as a fad of the 1960s. The vitality of such a project as Edward Ihnatowicz's cybernetic sculpture—which I hope to discuss in a later issue—is evidence that it is possible for artists to use computer technology successfully. But as far as computer graphics are concerned it looks as if something near a dead end has been reached. The correct moral to draw is simply that there is great scope here for new talent and for thinking a little harder.

A feature of computer technology as a whole is that everyone talks about what they are going to do so long in advance that the real thing when exhibited always seems some years out of date. This is particularly true of computer-based art, and if one rejects (as I do totally) the theory that mere description of a project is as interesting as its eventual realization, one is forced to the conclusion that there is too much talk about computer art and not enough action.

Not that one could accuse an artist like Frieder Nake, from Stuttgart University, of triviality or vagueness. His paper 'On Generative Aesthetics—Two Picture-Generating Programs' seemed to me to possess an intellectual rigour and integrity which is tragic in its misdirectedness. In saying this I am criticizing not Mr Nake personally but the whole school of aestheticians, many of them German, who have attempted to apply mathematical principles to art and poetry. This school seems to have originated with the work of an American mathematician G. D. Birkoff in the 1930s, and its most distinguished exponent is Max Bense. It is little followed in this country, and is unlikely to be taken up by people who believe that the task of criticism is essentially a registering of particular experiences as faithfully as possible.

In the course of his paper Nake defines some of his assumptions:

I find this puzzling. One might as well say 'Every given object...has its divine aspects besides its physical aspects. Its divine aspects are examined by divinity. This is necessary because there are a large number of chairs and lectureships in divinity endowed in universities throughout the world.' Aesthetics is a rather newer discipline than divinity—the word 'aesthetics' came into use in the nineteenth century to describe the judgement of art —but there are presumably a number of university faculties to keep going. I would ask Mr Nake if it is meaningful or helpful to speak of objects having 'aesthetic aspects', if they may at the same time be completely lacking in aesthetic value, relevance, significance or merits. My own feeling is that there are no aesthetic properties independently of a specific sociocultural context, and aesthetics as Mr Nake conceives it is a false science.

As for the attempt to model aesthetic preference using statistical information theory, I am sure it is true that the human brain possesses a statistical or quasi-statistical filter which, by distinguishing coincidences from meaningful connections, permits learning to take place. It is therefore likely that aesthetic appreciation depends on some system for detecting improbabilities in the environment. The aesthetic or critical criterion would then be a search for maximum meaning—or, to put it another way, minimum cliché—within given constraints. The ability of the human brain to make very powerful probabilistic assessments must be a prime reason for the evolutionary success of the species; but this ability cannot be separated from the human capacity for language—a uniquely and essentially human capacity, according to Wiener, Chomsky and others. When computer scientists have had a little more success in modelling human language (`natural language', as they call it), it will be worth considering the possible application of the information sciences to the study of human creativity. At present all the computer scientist and the information-theorist can do is provide very crude arithmeti-zations of natural language. Since we all possess in our brains a built-in automatic capability for operating probabilistically on inputs from the environment, most of us will be happy to carry on that way rather than arduously learn a plainly inadequate mathematical notation and method. Mr Nake eludes this criticism by abstracting all semantic content from aesthetics. It applies, however, to another paper presented at the symposium, 'Art as Function of Subject, Cognition and Time' by Vladimir Bonacić of the Zagreb group. How admirable is the intention of the New Tendencies group, with which both Nake and Bonacić have been associated, to desist from 'art' for several years and concentrate on visual research! And yet how amateurish it is to bring to bear on artistic experience a pseudo-rigorous string of formulae! (I refer to Dr Bonacić's theories, not to the mathematical transformations with which he programmes his light-sculptures; these from what I know of them—one was illustrated here last July—are interesting.)

Those who expect artists to be visionaries would have been disappointed by the symposium—except for the two characteristically original papers by Gustav Metzger. One of them outlined the role of computer graphics in the planning and co-ordination of his gigantic auto-destructive sculptural project Five Screens with Computer. The total project would cost two million pounds at least to realize and is open to the criticism that it is rather grandiose. It is best seen as a framework for ten or twenty years of research into computer techniques. Metzger's second paper, `New Ideas in Plotter Design, Construction and Output', suggested how existing techniques for drawing with computers could be replaced by more sophisticated systems, for instance using fibre optics and light-sensitive paper:

`The hand is a delicate thing; paper is delicate; ink, pencil, chalk, are delicate—why imprison all this in a steamroller? The stylus must have the capacity to act very much like the hand. It must be able to press hard, or gently touch a surface. It must bend at any required angle. Drawing is texture, tone and a range of difficult-to-describe actions and qualities; it is not merely that bland line of uniform density and texture that emerges from today's plotter.'

He also suggests that laser-beam manipulators, such as those developed for bone surgery, could be used in computer graphics, and reminds us that traditional graphics include `etching, engraving, and other abrasive/ incisive techniques'.

The exhibition mounted by the Computer Arts Society to accompany the symposium was disappointing, though some stylish graphics by Auro Lecci, an associate of the computer musician Pietro Grossi, are worth noting. To illustrate this article I have chosen a series of four graphics (not in the CAS exhibition) by Waldemar Cordeiro and Giorgio Moscati from Brasil. They have used an IBM 360/44 to perform transformations on a digitized image, using a standard line printer as the output device. What makes me feel that this is art rather than contrivance is the evocative choice of image. When I first saw this series I for a moment did not detect that the image depicts a male and a female head on the left, and still more ambiguous are the two standing figures on the right. Cordeiro and Moscati seem to be interested, like Richard Hamilton, in what Richard Morphet describes as 'the knife-edge border between legibility and illegibility'.1 The possibilities of effecting this kind of modulation in films seem very hopeful. Cordeiro's and Moscati's series seems like so many stills from a film sequence, exploring, perhaps, an elusive human relationship without the need for actors.

Computer-animated films are also an interesting and fairly virgin field, and moreover a sound economic proposition since they genuinely mechanize a tedious and expensive manual job. The same cannot be said of the computer program ART1 devised by Professors Katherine Nash and Richard H. Williams, of the universities of Minnesota and New Mexico respectively.2 The logic of this seems to be that the computer industry is emphasizing more and more the importance of programme 'packages' for various professionals, so that doctors, accountants, draughtsmen and others can use the computer effectively without having to bother themselves with software or hardware 'internals'. The artist is conceived as someone who wants to make a `personal statement' in the form of various squiggles, spheroids, etc., which he could draw for himself with a ruler and pencil in two minutes. For some reason Professors Nash and Williams think it helpful to provide this person with a set of programming facilities so that he can make these squiggles, etc., at much greater expense and more laboriously. The justification claimed is that the artist does not have to find out about computers before using the programme. The fallacy is that of regarding the artist as a specialist with pre-defined professional needs. The programme ART1 would be acceptable if it were presented more modestly as a teaching-aid for use in education at an elementary level.

An exhibition held in May at the Camden Art Centre contained some examples of the logical, systematized approach to art that the exhibition's name, 'Manufactured Art', implied: notably Rory McEwen's neat irridescent [misspelled, iridescent] multiples priced at under £2. Other contributions, such as work-in-progress on water and light by Marcello Salvadori's environmental research students, seemed far from any intelligible definition of manufactured art. It has been shown already that exhibitions of `high-technology' art can be usefully energizing-as no doubt this has been-even when weak in overall concept. I must nonetheless point out that the time is now ripe for exhibitions that present a more coherent theme.

Page 248:
1,2, 3 and 4
Waldemar Cordeiro—Giorgio Moscati, Sao Paulo Derivadas de Uma Imagem 1969
The image, originally from a Valentine’s Day poster, was digitized at 7 levels of darkness. Each printout is a transformation of the preceding one. The computer programme scans the image for horizontal and vertical breaks. 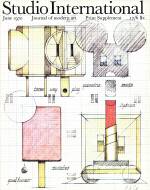 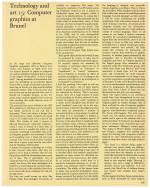 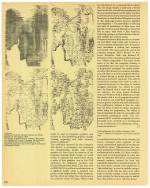