An artist can acquire such [technical] skills for himself or he can borrow other people's.

THIS ARTICLE INTRODUCES A NEW COLUMN TO APPEAR MONTHLY, DEVOTED TO THE RELATIONSHIP BETWEEN SCIENCE AND ART. CORRESPONDENCE, CONTRIBUTIONS AND INFORMATION WILL BE WELCOMED.

Anyone who wishes to explore the new media of expression offered by technology faces various obstacles. One obstacle is the problem of acquiring technical skills which may have been lacking from an education in the arts. An artist can acquire such skills for himself or he can borrow other people's.

It may be possible for him to acquire them himself. Hopefully, there will soon be better institutional structures than exist at present for helping people trained in the arts who wish to extend their technical and scientific education. It is not just academic teaching that is required, but also practical experience of the kind which can only be got by making a contribution to some technical project. At present, most artists who want to acquire specialist skills and knowledge will have to use their own initiative.

The alternative is to borrow other people's specialist skills. This raises the issue of group collaboration in art, an issue which nowadays seems to me rather important. It has long been one of the most telling criticisms levelled by the 'plain man' against artists that they are incapable of teamwork. The criticism is of course absurd if the term 'artist' is understood to include professionals in architecture, films, theatre, opera and so on. But it has some validity where the post-romantic visual arts are concerned. The Groupe de Recherche d'Art Visuel's 1961 manifesto (quoted in full in Jack Burnham's Beyond Modern Sculpture) attacked the 'cult of personality' in art—and the phrase with its political resonances is apt. Unfortunately the orthodox career-path open to an artist today—via galleries and museums—depends very much on his establishing some personal unmistakable style. Where collaborative groups have been formed, they have tended to break up for one reason or another.

It may be helpful to compare the activity of, say, a sculptor with that of a modern architect. The sculptor may delegate some of his work (for instance, procuring the right materials) to specialists, but on the whole he will be relying entirely on his own experience. An architect has to coordinate the work of numerous contractors, sub-contractors and specialist advisers, but the result may bear his personal individual stamp as clearly as does the lone sculptor's output. So in a way it is unimportant whether the skills they co-ordinate are primarily their own or primarily other people's: what is important is the creative process of coordinating or organizing technical resources. By this I do not mean any simple superimposition of order, but a more elusive organization which often cannot easily be analysed or paraphrased by an observer or by the artist himself. It is likely that the next generation of artists will not be physically and psychologically isolated in studios, but professionals of the same kind as architects or film directors. (Of course, the organizer of a project has his own loneliness to cope with, if all the members' separate activities can only be comprehended as a whole by him.) Essentially, technology may be seen as a storming of the citadel of memory: a progressive systematization, or making explicit, of functions for which human skills were previously necessary. At a simple level, it is plain that the computer supplants the office clerk, the washing-machine, the laundress, and so on. Occasionally a new invention presents a completely new dimension of experience, or appears to; but as it is developed the original skills that made it possible become quickly redundant. One example, from the field of computers, will suffice. The 'operating systems' now available enable many of the computer-room functions previously performed by operators, schedulers and other staff to be taken over by sophisticated software (programs) supplied by the manufacturer with the hardware. Interestingly, some of the old computer hands who have been involved with electronic data processing since its beginnings are having the same difficulty, on a reduced scale, in re-orienting to a new environment as did the office staff whom they originally supplanted. The balance of responsibility has shifted to highly-qualified soft-ware experts who design 'operating systems'.

As technology opens up more and more of the secrets of memory, so the true technological elite becomes smaller and smaller (with huge potential economic power, which we have only seen the' beginnings of in the BOAC pilots' strike and similar incidents). So while it is at present an excellent thing for artists to learn about electronics, or computer programming, the artistic imagination is unlikely to be satisfied for long with narrow and ephemeral skills. If technology is explicitness, then intelligence becomes knowing what can safely be forgotten or delegated. Once the principles of computer programming, for instance, have been learnt, the artist will want to press on to consider more `comprehensivist' problems such as man/ machine communication, systems analysis, and project planning and control.

'Comprehensivist' is a term borrowed from Buckminster Fuller, who has said 'If nature wants to develop a specialist, she does, and if nature wanted you to be a specialist, she'd have you born with one eye and a microscope fastened onto it.' In this column, I hope not only to keep track of developments in the field of art, science and technology, but also to open discussion on ideas which are consolidating to form a new comprehensivist sensibility. 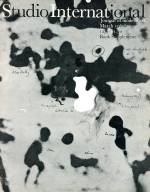 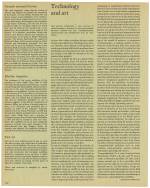