'Recuerdos de Mexico' ('Memories of Mexico'), an exhibition of paintings by prominent Santa Fe artist, Susan Contreras, was on view at the Parks Gallery in New Mexico, from 15 October-7 November 2005. The exhibition presented remembered images of Contreras's time there as a child (she was born there) and on visits to Mexico thereafter. Contreras became fascinated by the culture and artwork to which she was exposed in Mexico over the years and the cultural drama and colours of Mexico are evident in her new paintings. Born in Mexico City in 1952, Contreras received her education at the Santa Fe Institute, the University of California at Santa Barbara and the Skowhegan School of painting and sculpture in Skowhegan, Maine. 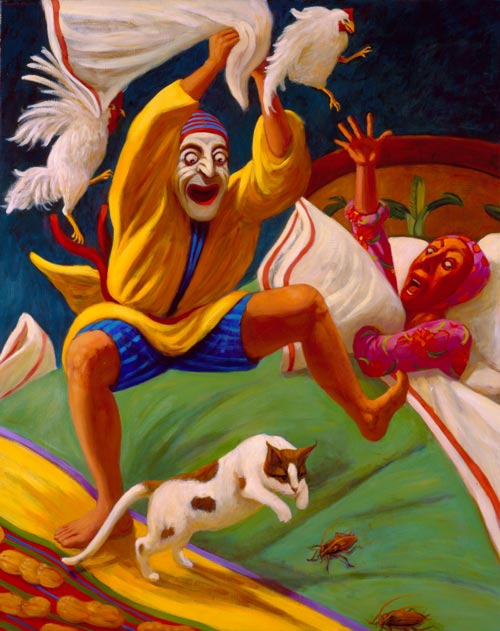 As has been the case with all of Susan Contreras's paintings in the last ten or more years, all the figures wear masks, as in 'Los Trabajadores' ('The Workers', oil on linen, 50' x 60'), 'Las Cucarachas' ('The Cockroaches', oil on linen, 58' x 46') and 'Sonrisas Dulces' ('Sweet Smiles', oil on canvas, 40' x 50'). With masks, Contreras creates an alternative reality on linen or canvas. Masks enrapture her; she collects them, uses them as models, and transforms them into animated figures. As she said in an interview for the magazine Southwest Art in November 1998, 'A mask has a spirit of its own that belies the emotions of the character wearing it.' They are witty and wonderful escapes from constraints. As she noted, they can provide her with 'a great freedom.' She claimed, that 'as a shy person, I viewed the masks as liberating. They presented an opportunity for extroverted, unrestrained behaviour.' Rick Romancito wrote in Tempo Magazine/The Taos News, 4-10 November 2004, 'that among the Pueblo Indians of the south-west, when one wears the mask and costume of certain spiritual figures, they become infused with that spirit. They cease to remain human and become something else.' As Contreras has claimed, 'I use masks as my subject matter because they have a transformative quality. They amplify the drama of real life by twisting consciousness and reaching the unexpected.

Contreras uses rich textures and colours in her paintings - bright reds, vivid yellows and dark shadows left by glowing rays of light blend with the fanciful subjects of her narrative paintings. The primal power and dreamlike nature of masks fill her works. Contreras has been collecting masks since she was a child, when her mother would take her to fiestas where they were prominent. Contreras claims that every time she gets a new mask it inspires a new painting, and when she gets an idea for a painting, she runs around to see what characters from her masks would fit in.

Sue Contreras's early paintings did not depict masked figures. In fact, they chronicled aspects of typical American life that were slightly offbeat, mostly in a humorous way. In the 1980s, many of her paintings depicted circus scenes or carnivals, as in 'Good News' of the mid-1980s (oil on canvas), or carnivals, as in 'Magic' (1988, oil on canvas, 62' x 79') and 'Carnival Goldfish' (1989, oil on canvas, 78' x 58'). 'Good News' presents the clowns of the circus doing their thing in quirky poses that tempt circus goers to laugh, as at the clown pretending to sit without a seat under him and read the newspaper with all sorts of circus activities taking place around him. 'Magic' depicts the fire eaters, oriental spirit figure and dragon masks, and other masked or costumed figures functioning in an atmosphere with more mundane figures, such as a man with a cane nonchalantly walking through the scene carrying a plastic bag of water with goldfish in his left hand, and a partial figure of a passerby breathing out smoke, apparently from a cigarette, taking in stride the magical goings on around him. 'Carnival Goldfish' is filled with colorful types of the midway of a carnival and its cotton candy, snow cones and goldfish in plastic bags. To create her chronicled episodes from daily American life, Contreras used photographs as a reference and sometimes friends as models.

It was in the early to mid-1990s that Contreras's paintings began to feature masked figures and mask-faced caricatures, inspired by her experience of costumed rites and festivals of Mexico, Central America and, later, Peru. Her fantastic figures all wearing masks, as in her 1998 painting 'Solar Eclipse,' (oil on linen, 50' x 40'), in which a group of figures wearing masks of chickens, a crow with a devious smile and a three-eyed creature, amid other childlike figures, gesture wildly at the solar eclipse taking place above them, which seems to evoke wonder, and possibly fear, in a moment of supreme natural magic. Another emotionally charged scene appears in 'Coattails and Ties' (1998, oil on linen, 42' x 54') with the altercation of men with masks in aggressive grimaces and actions to match. In other paintings of the late 1990s, the figures go about familiar outdoor activities such as fishing, picking fruit, chasing fireflies, buying plants, flying kites or participating in festivals. However, with the addition of masks, the ordinary becomes extraordinary. In these paintings, Contreras brought in landscape elements that add another dimension to the scenes.

A dynamic painting, entitled 'Lovesick Fools' (2002, oil on canvas) depicts a group of masked figures in billowing costumes prancing and dancing as if to proclaim the love that animates them. Another animated outdoor scene can be seen in 'Trampoline' (2004, oil on canvas, 64' x 56'). These masked figures, arms raised and legs bent, jump into the air as if rising from a trampoline, although the trampoline itself does not appear. The figures are seen against a lush background of sky and desert landscape typical of the area in the Gallisteo basin near Santa Fe. A white bird flies above the figures emphasising their flight into the air.

Apart from the masks worn by the figures, what is typical in all these paintings is the perfect sense of proportion of the scene and the way it fills the picture space, as well as the vibrant colours used - reds, dazzling gold, earthy browns, ephemeral blues and luscious greens. These colours, even brighter and more dazzling, also appear in Conteras's newest paintings in her latest exhibition at the Parks Gallery in Taos. 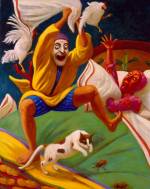 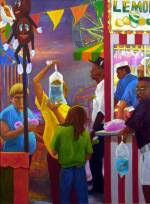 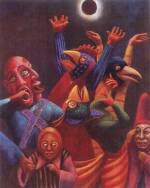 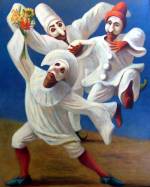 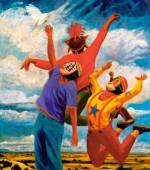