This is a powerful, scholarly, and enlightening exhibition. Wilton and Barringer together at Tate Britain help us towards a proper understanding of 20th century developments in American painting, sculpture, and indeed land art 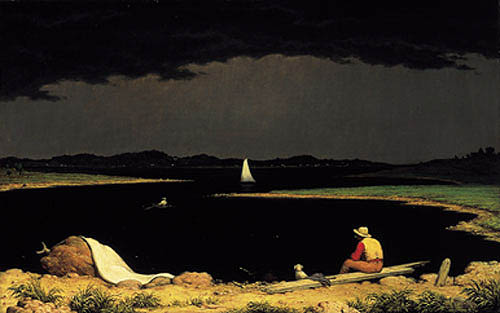 In the opening column of the curator Andrew Wilton’s excellent catalogue summary, The Sublime in the Old World and the New he refers most appropriately to President Thomas Jefferson’s famous government scientific expedition, carried out by Captain Lewis and Lieutenant Clark. Two years were allocated to the quest for the true course of the great Missouri River, tracing it up from its confluence with the Mississippi at St Louis to its source in the Rocky Mountains, to cross the continental divide and then to follow the Columbia River to its Pacific exit.

In contemplating a conclusive exhibition such as ‘American Sublime’, Jefferson can never be far from the source of ideas, for he had already discovered and embraced the idea of the sublime long before. As early as 1765, at the age of 22, he had acquired the key ‘works’ of William Shenstone, who first set out the principles of the jardin anglais, and had absorbed Edmund Burke’s Essay on the Sublime and the Beautiful. Jefferson’s own library at Monticello indicates a voracious pursuit of landscape and garden literature of the time. In a visit to the west of England with John Adams in April 1786, he carried with him Thomas Whateley’s Observations on Modern Gardening, the second edition (1770). Such places as ‘Capability’ Brown’s Wotton and Moor Park greatly impressed him. Sadly he had missed Brown, who died in 1783, by just three years. But Brown’s reputation was still at its height then. Noticeably too, Jefferson shows no liking for picturesque ruins in his notes, nor, significantly in that vein, did he ever include the books by Uvedale Price and Humphrey Repton. 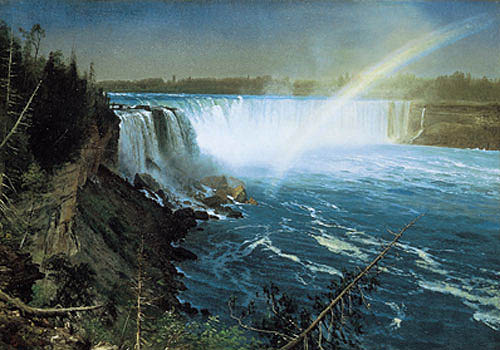 Jefferson of course, was fundamentally a classicist, and embraced pastoralism from that standpoint. There could be two agendas for the expedition of 1805. The official, government purpose was scientific: but the quest for a sublime landscape was certainly embedded in the mind of Clark, who could not resist comparing the scenography to that of Salvator Rosa, and was explicit in acknowledging the sublime in these discoveries. The American public were for their part not to be disappointed. The expectation was that the American Sublime Landscape was indeed more magnificent, hence more insurpassably transcendental than any previously European experience.

The globalisation of the concept had commenced, recognising too the oppositions inherent in the sublime and the beautiful. Over the following years up to 1820, the sublime principles of both Immanuel Kant and Edmund Burke broadly consolidated the definition.

But there was, too, in the formation of the American version, a more religious quest; a search for spiritual reaffirmation of ‘God’s purpose’, an aspect, as Andrew Wilton avers, of ‘the broadly devout American consciousness’, itself derived from the puritan exodus from the post-Cromwellian British Isles through the later 17th and 1l8th centuries. The exhibition commences skilfully to weave a primarily natural course through the development of American landscape painting until l880: yet this reverie is traumatised early by the nightmare sequence of Thomas Cole’s ‘The Course of Empire’, five highly theatrical and ultimately disillusioning tableaux representing human achievement and decline from the ‘Savage State’ to the state of ‘Desolation’. As co-curator Tim Barringer’s essay – The Course of Empires – covering this development argues, a clear agenda to sanctify America’s untouched wilderness – under threat but as yet uncontaminated by European decadence – existed in Cole’s intention here.

Jefferson lived on into the l820s. Cole, in his ‘Course of Empire’ sequence, laments the passing of ‘the peaceful republic of self-contained rural communities’ proposed by Jefferson. He realises that the kind of utilitarianism espoused by President Andrew Jackson (author of the Indian Removal Act of 1830) had changed that course forever.

This room, No 2, is a brilliant insertion plotted by Wilton and Barringer together. It gives both a hard edge and a lingering pathos to all that follows. Yet, not Cole, but Frederic Edwin Church (1826–1900) emerges as the outstanding and most prolific painter of the exhibition period 1820–1880. Church was fortunate to be able to take stock of such works from England as John Martin’s massive triptych, ‘The Great Day of Wrath’, ‘The Last Judgement’ and the ‘Plains of Heaven’, painted from l851–3, and exhibited following Martin’s death in 1854 and in New York in 1856. Such dramatised paintings were more evidently transferable as an influence than the works of J M W Turner had been a generation or so earlier. (One might here claim that England, not America, seeded Hollywood: Spielberg, Stone, and other authors of the recent spectacular genre of movies.) Church’s work consolidates the majesty of nature over man, providing a golden filament that runs through the exhibition after room 2. The oil sketch, ‘Landscape with Sunset’ (1860–70) – see illustrations above – boldly presents – as phenomenal – an unusual sunset, noted near his home, casting a glow over the Hudson landscape, with the distant Catskills a diffuse blur. Church is drawn by natural phenomena – volcanoes, icebergs, thunderclouds, as he travels the northern and southern American hemispheres. 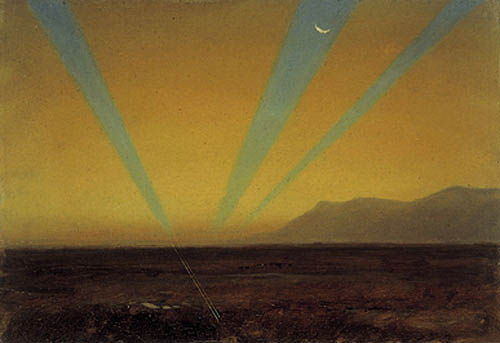 And so begins our contemporary quest for the roots of an American painting. It can indeed begin at this exhibition. Church, of course, provides a trajectory of growing reconciliation with nature, once humanity can experience her true power. But such paintings as ‘Approaching Thunderstorm’ by Martin Johnson Heade (see illustration above), executed in l859, have not been drawn by John Martin, or even the Dusseldorf school, also familiar in the United States earlier. Heade had taken over Church’s studio, and the two were friends. But with Heade we find something new, if simpler, even minimal at times by comparison. Heade, son of a farmer from Pennsylvania, has increasingly captivated collectors of Americana in the later twentieth century. The impending civil war, looming as this painting was made, seems also to contribute to the sombre mood and dramatic hard edge colouring. John Frederick Kensett (1816–1872) especially in his coastal Connecticut scenes, reveals a similar skill that captures minutes of ‘stillness’, contemplating a spatial quantum that is undistractedly American (see illustration) as in ‘Eaton’s Neck, Long Island’ (1872). Kensett had an admiration for Claude (on his European tour in the early l840s he assiduously copied, ‘Seaport with the Landing of Cleopatra at Tarsus’, but this exercise seems to have been purely academic. Kensett is moving forward in exploring an American sense of space.

This is a powerful, scholarly, and enlightening exhibition. Wilton and Barringer together at Tate Britain help us towards a proper understanding of 20th century developments in American painting, sculpture, and indeed land art. This last illustration (Kensett) reminds one of Robert Smithson’s rejection of the picturesque for the sublime. This exhibition will travel to Philadelphia and to Mineapolis, albeit in abbreviated form. Sometimes it is good to carry coals to Newcastle.