Showcasing his work from 1921 to his death in 1964, this exhibition allows the visitor to fully appreciate the artist’s interest in going back through his older sketches and paintings to find inspiration 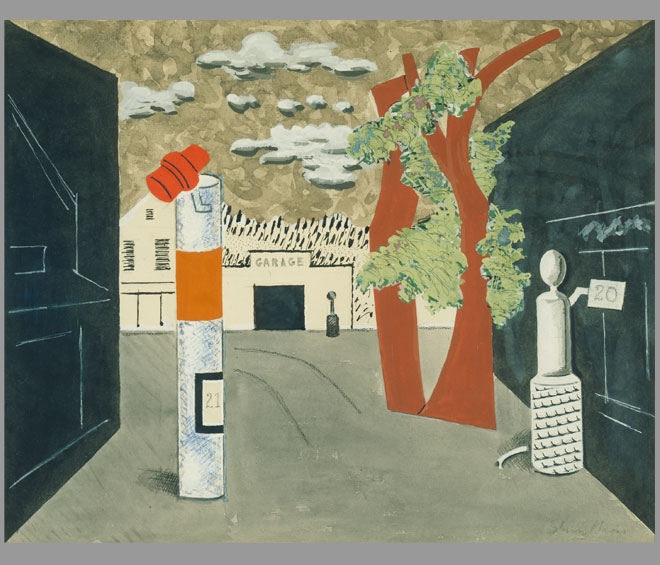 On 23 June 1964, after watching a French film on television, artist Stuart Davis added the word “fin” to the painting resting on his easel and went to bed. Later that evening, he suffered a stroke and died in the ambulance on the way to New York’s Roosevelt Hospital. This painting, posthumously titled Fin (1962-64), also serves as the conclusion to the beautifully selected and focused exhibition devoted to the artist’s paintings on view at the Whitney Museum of American Art, New York. While it is tempting to see the tragic coincidence of the last addition to the painting and the artist’s death as a decisive, or even prescient, acknowledgment of an ending, the incomplete nature of the painting, with masking tape still clinging to the canvas, evokes an ellipsis. Beginning in the late 30s, Davis had begun to look to earlier paintings and sketches for inspiration, recycling older compositions in a manner he described as akin to a jazz musician taking a series of musical notes and reworking them into an endless series of improvisations. Painting the three letters – F, I, N – on the canvas was a flourish, an addition to a composition that Davis might have hoped to return to and build off of in a later variation.

Davis was born in 1892 in Philadelphia, where his father worked as an illustrator. At 16, with the blessing of his parents, he left high school and moved to New York City to study with Robert Henri, a leading figure of the Ashcan School and an old family friend. From Henri, the young artist learned that art can not be separated from life, a belief that would shape Davis’s practice for the rest of his career. Like so many American artists of his generation, Davis was greatly influenced by the Armory Show in 1913. He exhibited five watercolours in the show, but it was the paintings of Paul Gauguin. Henri Matisse and Vincent van Gogh that proved a revelation. Davis later explained that, after attending the Armory, he began a period of apprenticeship, during which he attempted to master the colours and forms he had seen in the works of the French artists he so admired.

The exhibition at the Whitney includes no works for this early period. Instead, we meet Davis in 1921, at a breakthrough moment when the artist completed his first group of tobacco still lifes. While the style owes much to the collages of Georges Braque and Pablo Picasso, the subject matter is distinctly American, drawn from the advertisements and commercial packaging of cigarettes and related mass-produced smoking paraphernalia. During the 20s, Davis’s work quickly evolved from these compact, neatly ordered paintings to sparse still lifes populated by such objects as a lone bottle of Odol mouthwash. In Odol (1924), the pithy slogan “It Purifies” adds a playful comment on the contents of the bottle as well as the clean lines used to delineate its form and the clinical simplicity of the composition. Though Davis pared down his forms to their essential shapes, he felt conflicted about pure abstraction; he sought a way to balance communicating the experience of modern American life with finding an equally dynamic and progressive artistic style.

In 1925, Davis first encountered the work of Fernand Léger at an exhibition organised by the Société Anonyme at the Anderson Galleries on Park Avenue, New York. Davis’s admiration for the French artist was immediate and enduring. During his 13-month stay in Paris between 1928 and 1929, Davis made several trips to Léger’s studio and he bonded with the Frenchman over their shared interest in how technological advancements were changing the world. They were fascinated with how the telephone, cinema, radio, and air travel now made it possible to receive news and travel faster than ever before. These developments seemed to break down boundaries of time and space, a phenomenon Davis captures in New York – Paris No 2, 1932 (1932) by combining the cityscapes of Paris and New York City into a single composition with multiple, juxtaposing views. Here, subway platforms, advertising columns, lampposts, postboxes and buildings overlap and at times seem to merge into one another as the two cities meet in the tight space within the picture frame.

As the Great Depression worsened in the 30s, Davis threw himself into political activism, campaigning on behalf of artists’ economic rights and for freedom of expression. Although Davis’s output was limited during this decade, he did produce a number of murals, several of which, along with accompanying studies, are on view in the exhibition. In the mural commissioned in 1932 for the men’s lounge at New York’s Radio City Music Hall, Davis reduced his palette to black, white, red and blue, and created a homage to masculine pursuits: sailing, cards, horses, cars, smoking and even the barber shop. Here, the simplified linear forms seen in Davis’s still lifes from the 1920s are mixed with the compositional dynamism inherited from Léger: the densely packed scene keeps the viewer’s eyes in constant motion. There is no central focus, just a cacophony.

One of the greatest strengths of the latter part of the show is the grouping of related paintings, often separated by decades, which allows the visitor to fully appreciate the artist’s interest in going back through his older sketches and paintings to find inspiration. When viewing Landscape (1932/1935), Shapes of Landscape Space (1939), Tournos (1954) and Memo (1956), the strength and depth of Davis’s pictorial improvisation comes to the fore. As Harry Cooper, curator and head of modern art at the National Gallery of Art, Washington DC, explains in his excellent catalogue essay, the inspiration for these four works was most likely a scene in Gloucester, Massachusetts, where Davis summered for a number of years. In an interview with John Wingate from 1957, Davis states that Memo has a “beat up subject”, an apt yet evasive explanation of his process: after four variations, the composition has metamorphosed away from referential exactitude while never losing the original subject. A harbour scene, with a small building standing on the left of the pier with the outlines of schooners and their rigging just behind, is easily legible in Landscape and perhaps even more clearly in Shapes of Landscape Space, in which the word “fish” has been added to top of the small building and the black outlines of the first canvas have been replaced with blocks of bold colours. In Tournos, the background flattens to a field of red, and the central scene is reduced to a patchwork of white, black, blue and green, as colour and shape come to dominate the composition. The lines from Landscape return in Memo, but inversed, white on black. Yet the curved forms in green and red that spread from the lower left corner towards the centre of the canvas pull the painting into a new, more riotous direction. To say that Davis is working with a “beat up subject” is not to imply that it is worn out, but that through numerous variations he pushes its limits. For Davis, a single subject had infinite improvisations. 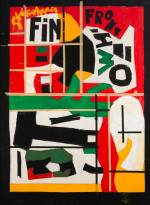 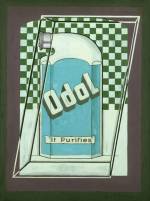 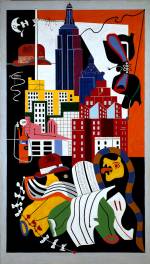 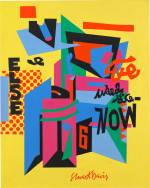 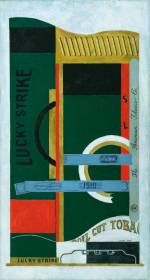