Stillness in Motion: The Photographs of Fan Ho

Stillness in Motion: The Photographs of Fan Ho

The small but intriguing selection of photographs by Chinese photographer and filmmaker Fan Ho, on view at the Laurence Miller Gallery in New York, offers a rare treat; for these images created a half-century ago are alive with nuance. Fan Ho's compositional mastery will delight the eyes as the deeper content of the photographs invites curiosity and further inquiry. Described as a 'poet with a camera', Fan Ho creates images that are at once vintage and modern, stark, and laden with symbolism. 'Fan Ho: Hong Kong, 1952-1964' is, indeed, an event, for it represents Fan Ho's first one-person photography exhibit in the city. With merely a dozen of Ho's photographs of daily life in the streets of Hong Kong, the exhibit will draw viewers into the world of an extraordinary artist.

Now in his seventies, Fan Ho lives in San Jose, CA, but spends about half his time in Hong Kong and Taiwan directing films. He is far better known overseas for his photography and film credits. During the past 50 years, he has won more than 250 awards for his work. He is a Fellow of the Photographic Society of America, the Royal Photographic Society and the Royal Society of Arts in England, and an Honorary Member of the Photographic Societies of Singapore, Argentina, Brazil, Germany, France, Italy and Belgium. During his long career, he has taught photography and filmmaking at a dozen universities. He has also written a number of books.

The experimental nature of Fan Ho's vision is immediately apparent in these photographs, which are notable not only for their altered perspectives, dramatic compositions and surreal abstraction, but also for the view they provide of the markets, streets and slums of Hong Kong. As a chronicle of life in a country that is beginning to experience major political and economic change, the photographs serve as documentation of the effects these changes had in individual lives and on the landscape. Historically, Hong Kong served as a gateway for China's regional and international trade. After 1949, when the People's Republic of China was established, Hong Kong was subject to embargoes imposed by the US and the United Nations, increased immigration and the need to develop local industries within an increasingly isolationist regime.

Although unfamiliar with Fan Ho's work before this year, gallery owner Laurence Miller moved quickly upon seeing a selection of Fan Ho's photographs at photoLA 2006, held in Los Angeles in January. 'I discovered Fan Ho's work hanging in another exhibitor's booth and was immediately taken by their power and inventiveness, like a Chinese Ray Metzker, whom we also represent', Miller said. 'They felt like direct descendants of the Bauhaus, yet they were made in Hong Kong. They were abstract and humanistic at the same time, and I knew they were for me. They were priced so affordably that I purchased every good one available - a total of 26. When they arrived in New York, I quickly sold half of them to one prominent collector'.

An artist that Fan Ho might consider a kindred spirit, Metzker (b. 1931) received a master's degree from the Chicago Institute of Design, and there encountered the principles of the Bauhaus. Metzker chose inner-city Chicago at the close of the 1950s as the subject of his graduate thesis. Like Ho, Metzker's work in black and white is strongly geometric and, with its contrasting light and shadow, highly dramatic. Born one year apart and nearly a world away from each other, Metzker and Fan Ho embraced the Bauhaus early in their careers. Looking at Fan Ho's 'Windows and Shadows', one might easily recall the work of prominent Bauhaus artist Laszlo Moholy-Nagy (1895-1946). For example, Moholy-Nagy's 'Bauhaus Balconies' (1926) and Fan Ho's 'Windows and Shadows' (1952) share a similar geometric magnetism. Born in Hungary, Moholy-Nagy moved to the US in 1937 to direct the New Bauhaus, a short-lived venture. Two years later, he founded the Chicago Institute of Design to teach and continue the Bauhaus aesthetic. Like many Bauhaus artists, Moholy-Nagy was extremely versatile, known for his painting, sculpture, photography and typography. His work included film, stage and industrial design. In Moholy-Nagy's 'New Vision' for photography, the camera became an experimental instrument, capable of revealing what could not be detected with the eyes alone.

Born in Shanghai in 1932, Fan Ho later moved with his family to Hong Kong where he began to take photographs using a Rolleiflex given to him by his father. Initially, Fan Ho considered photography an engaging pastime. But as he roamed the streets and alleyways of Hong Kong, he was drawn to the city and its inhabitants. He used his camera to search for the stories obscured by surface details and to find what had been missed by the naked eye; the slump of a shoulder as it bears the weight of a basket ('Line and Shadow', 1953); capitulation to the fatigue and loneliness of life in the city ('Down', 1961; 'Lonely Stroll', 1958); and the urge to keep moving as an antidote for social dislocation and confusion ('It's Raining', 1955). Capturing moments within strong visual frameworks, Fan Ho also reveals the restlessness beneath the stillness of his figures. They are engaged in a variety of pursuits, some apparent ('Horizontal Market View', 1962) and some that can only be guessed at ('In the Still of the Night', 1958), leaving viewers to create their own scenarios.

Suspension within motion is a recurring theme; figures drift through the scenes and their lives, engaged in purposeful pursuits as if these activities are what ties them to the earth. Some figures are literally suspended, and it is these images that will likely continue to haunt viewers. 'Man on the Ropes' (1960), which opens the show, is a good introduction to Fan Ho's ability to cause a catch of breath with an unusual combination of reality and abstraction.

Mark Pinsukanjana, director of Modernbook Gallery in Palo Alto, CA, which exhibited Fan Ho's work at photoLA, commented that, 'These vintage photographs are a document of Fan Ho's life in search of a beauty sometimes hidden amidst the overcrowded chaos of everyday life and survival in Hong Kong in the 1950s and early 1960s. The artist experimented with camera angles and developing techniques - anything that would get closer to the essence of the internal feeling inside a visual image. He would crop one image to two inches high and a foot wide. On another image, he would elongate a figure by bending the paper beneath the enlarger'. The jarring effect of distorted, enlongated figures can be seen in 'At the Crossroad' (c. 1960), with figures that resemble cardboard cut-outs placed before a funhouse mirror.

Ho's films are equally exciting for the variety of perceptives and techniques he uses. According to Pinsukanjana, Ho's favourite of his films is 'Lost' from 1969; this film is included in the national film archives in Hong Kong and Taiwan. 'In "Lost", one will see the chaotic life of one man in Hong Kong', Pinsukanjana said. 'The film follows him and finds the beauty that surrounds him; he is lost because he never saw it. I think that one can say that this is similar to Fan Ho's photographs in the sense that Hong Kong is crowded, busy and chaotic to many, but for Fan Ho, he was able to convert [what he found] and find beauty'. Modernbook has been working with Fan Ho for several years and introduced the artist to the US market. In July, the gallery will release Fan Ho's book, Hong Kong Yesterday,in standard and limited editions; and in the fall, the gallery will hold an exhibit of 100 examples of Fan Ho's work, 'Vintage Photographs'.1

It may seem to those discovering Fan Ho's work for the first time that they have missed a well-kept secret, but with exhibits on the east coast at the Laurence Miller Gallery and on the west coast at Modernbook, along with the forthcoming Hong Kong Yesterday, now may be a good time to catch up with an artist worthy of attention. 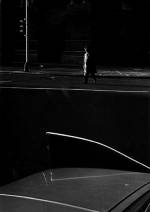 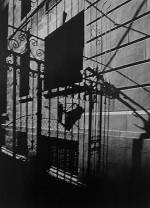 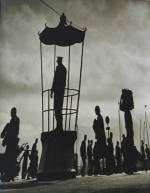 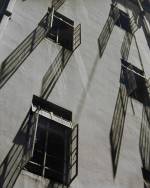