Spencer Finch: The Opposite of Blindness

Spencer Finch: The Opposite of Blindness

In his third solo exhibition at the Lisson Gallery, Finch attempts to take visitors beyond the limits of natural vision and into a parallel reality occupied by insects, GPS equipment and Martian light

Watching a bee in flight is a hard thing to do: one feels a sense of dizziness in the struggle to keep up with its random dashing, darting and looping. In his third solo exhibition at the Lisson Gallery, Spencer Finch attempts to take visitors beyond such limits of natural vision and into a parallel reality occupied by insects, GPS equipment and Martian light. The exhibition’s title, The Opposite of Blindness, is a line taken from Anne Carson’s Autobiography of Red, a “novel in verse” that sets out to transform fragments of classical poetry through a modern lens: it’s an apt reference for Finch, preoccupied as ever here with uncovering new perspectives on the natural world via scientific methods.

Finch was born in 1962 in New Haven, Connecticut, the child of a chemist and an elementary school teacher. It was this upbringing, perhaps, which influenced his preoccupation with scientific methodologies. Throughout his career, Finch has used patient scientific observation to interrogate human experience. To many, Finch is most familiar through his public art: in New York’s Morgan Library, High Line park and, next year, Paddington Crossrail station, the artist creates installations made up of coloured glass panes, playfully transforming familiar spaces with kaleidoscopic light that changes throughout the day. As in these public artworks, The Opposite of Blindness sees Finch using shifting light and colour to draw attention to the temporal and provisional nature of what we think of as visual reality.

The first works on show introduce the playful oscillations of perspective, which form a backbone to this exhibition. Sunflower (Bee’s View)is a trio of pastel on paper drawings, mesmerising facsimiles of sunflower heads seen at close range, rendered in shifting browns, greens and yellows. As the exhibition notes are quick to point out, the arrangement of these seeds follow the Fibonacci sequence, as do all 70 species of the sunflower genus. Finch follows the sequence with painstaking accuracy, and the more one looks, the more these drawings stare back at you, resembling the compound eyes of the bee observer.

Opposite is Meadow #2 (following a bee), where soft pastel abstracted flowers are arranged seemingly at random, with a faint line negotiating a rendezvous with each on a meandering route across the paper. The largest in a series, this piece is inspired by Emily Dickinson’s poetry: “To make a prairie it takes a clover and one bee, / One clover, and a bee, / and revery.” In its creation, Finch followed a bee around his garden with a GPS, tracking his own pursuit and marking the bee’s stops along the way. Juxtaposing the microscopic scale of Sunflower (Bee’s View), the work provides a distant overview of the bee’s flighty energy, and there’s a light-hearted undertone in the idea of Finch’s wild bee chase.

Finch photographed each flower the bee visited in order to recreate the colour accurately later in pastel, and this diligence is also seen in his watercolour still lifes, of which the exhibition boasts three quartets. These pictures feature traditional still life subjects – mandarins, tulips and fruit – abstracted into rectangular licks of watercolour. As Finch puts it in the exhibition notes, the works were created using “a light booth made out of foam core … so that I could mix colour consistently regardless of the ambient light in the studio”. He observed the colours of his subjects throughout the day to demonstrate that “the still life is not really still, but totally relative and constantly changing”. The range of colours within each set is subtle and surprising, and Finch succeeds in his aim of making the viewer stop short: the paintings’ methodical organisation suggests a palette of colour swatches, inviting one to reimagine classic, museum-bound still lifes, previously thought of as static, with this new understanding of natural light’s mutability.

The exhibition’s standout artwork is the new installation Mars (Sunrise). Here, 70 fluorescent tubes are arranged in a radial pattern evoking a sunrise: each is a dazzling striped confection of bright neon blues, greens, oranges and reds, which together blend to create the specific type of pink light found on the surface of Mars. The fixtures were calibrated, Finch tells us, from measurements taken by Nasa’s Mars Pathfinder rover, recreating a type of light that no person has physiologically experienced. The invitation to ponder one’s definition of natural light is, however, submerged slightly by the eye-catching potential of the structure itself. Finch is experienced in working with fluorescent neon lighting, assembling dazzling three-dimensional stars – 49 Years Ago (Starlight) (2011)– and jagged cloudscapes – Sunlight in an Empty Room (2004); in comparison, Mars (Sunrise) appears somewhat static.

Finch has been described as a jack of all mediums, and with Clouds (Gasherbrum IV,1984) he translates photographs into mosaic. Small square glass tiles lie in rows, each a different shade on a spectrum of subdued blue, grey and white. We are told this work is a representational mosaic of a mountaintop during a mountain-climbing disaster: however, in the absence of the six other mosaics that make up this series, such a reading is not obvious. The subtle colour variety within a repetitious structure evokes Finch’s landmark installation Trying to Remember the Color of the Sky on That September Morning (2014) at the September 11 Memorial Museum, made up of hand-painted rectangles bearing different shades of sky-blue, one for each of the dead. With its uneven surface and roughly cut tiles, Clouds (Gasherbrum IV, 1984)is an abstract work, evoking white noise, but with enough contours and jagged details to catch the wandering eye.

Such features are explored further in the Fog (Lake Wononscopomac) series, seven new pastel and pencil drawings depicting murky monochrome landscapes. Or so it would seem. As Finch explains: “Although they all appear ‘grey’ there is actually a wide range of colour in the drawings; fog, it turns out, is rather colourful.” Such mistaken perceptions are also gestured towards with the sculpture Lump (of concrete) Mistaken for a Pile (of dirty snow) #1, 2010, which sits ambiguously in the courtyard. Each foggy picture’s seeming featurelessness conceals details such as land, water and the horizon: through fog’s imposition of near-blindness, we are encouraged to look more carefully than ever. Finch explored the aesthetics of fog before in his earlier work Thank You, Fog (2009), and indeed much of this exhibition sees the artist revisiting well-trodden territory. Newcomers to Finch’s work will find The Opposite of Blindness an intriguing introduction to his ideas, while those more familiar may find themselves too comfortable. 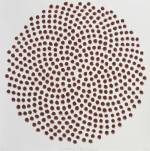 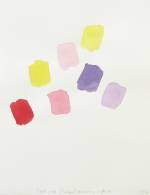 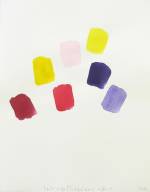 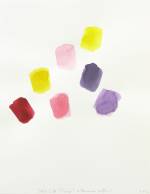 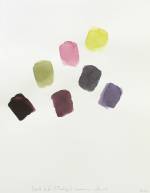