South Africa: The Art of a Nation

South Africa: The Art of a Nation

This exhibition is packed with fantastic items that tell stories of resilience and resistance. But they are not given the space they deserve 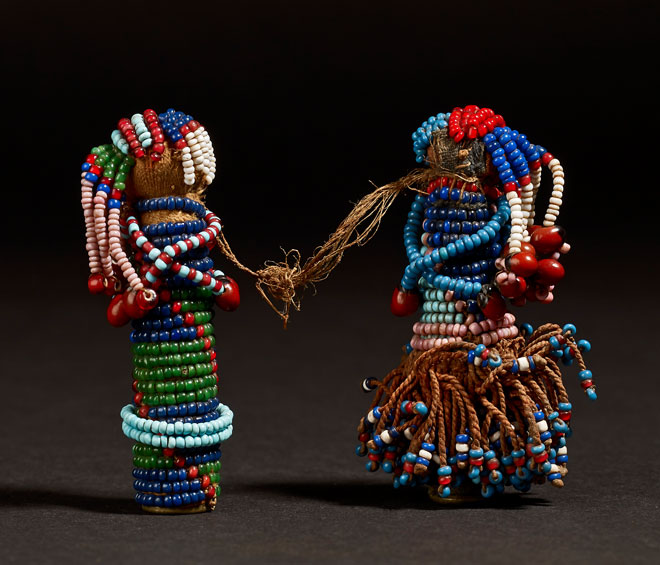 South Africa: The Art of a Nation is full of poignant and powerful objects that hint of stories untold and epoch-defining events, struggle and triumph. But this exhibition tries to hammer home too many points, and in doing so looses something in the process. Rather than focusing on any given period of time, the curators have tried to cram nearly a million years into a disappointingly tiny display.

Among the first items visitors encounter is the Kathu Pan hand axe, a beautiful piece of crafted ironstone thought to be about a million years old. Too thin to be practical, archaeologists believe it to be an ornamental object, or a demonstration of skill by its maker. But an item this old was not made by human hands, but rather by an earlier human species called homo ergaster.

This is a remarkable object, proving to all those who believe art started in Europe, that Africa was not only the birthplace of the human species, but also of artistic creation. But its inclusion here (with a ridiculous caption stating “maker’s name unrecorded”) seems altogether incongruous. I struggle to imagine an exhibition that would cover one million years of French art, for example, let alone one that would include the hand axes of the Neanderthals.

From rocks to riches, we leap to the 800-year-old golden rhinoceros of Mapungubwe, an item of special significance in South Africa. It was found in the 1930s at the site of the first kingdom in southern Africa, but was kept under wraps because it contradicted the apartheid narrative of terra nullius, the myth that the region was empty before the arrival of white colonisers. It is now the symbol of the order of South Africa’s highest honour, which was first presented to Nelson Mandela in 2002.

Objects made of more humble materials are no less powerful. A plate decorated with postage stamps by one Mrs Hamelburg shows not only breathtaking ingenuity and artistic skill, but also remarkable resilience in the face of horrific circumstances. She was one of thousands of Boers and black South Africans (mainly women and children) taken into concentration camps by the British army in the early 1900s. It is difficult to imagine something so fine being crafted in the squalid conditions in which at least 48,000 people died.

Resistance, too, could take unusual forms. A finely beaded necklace supporting two snuffboxes is thought to carry a subversive message. The lids of these boxes are made from medallions sporting the head of George V. The text speculates that, far from showing signs of allegiance to the British crown, these snuff boxes refer to the act of taking heads as trophies, a practice, we are told, carried out by both the British and Xhosa people.

The final work in this exhibition is by the contemporary South African artist Mary Sibande. Two figures cast from Sibande’s body stand opposite each other in battling poses, not unlike frozen superheroes. One is Sibande’s alter ego, Sophie, dressed in a bright blue Victorian maid’s dress. The other figure wears a dress adorned with purple tentacles that are echoed in the strange fabric swirls that fly up behind her. Sophie represents Sibande’s mother and grandmother, who were maids in white South African households. The figure dressed in purple embodies the significance of the anti-apartheid Purple Rain Protests of 1989, so called because of the purple dye that was fired at protesters from water cannons. In the aftermath, graffiti appeared on the buildings of Cape Town declaring, “the purple shall govern”, a play on words based on the opening statement of the 1955 Freedom Charter that states: “The people shall govern.”

For a country that has 11 official languages and a history as rich and dramatic as South Africa’s, South Africa: The Art of a Nation, while fascinating, is also frustrating. It feels like several exhibitions combined into one very small one, and a reductive, if well meaning one, at that. 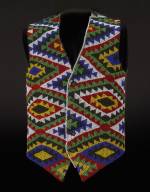