This is a staggering show, dominated by five unsettling figures, whose abstraction echoes the artist’s explanation that they are embarking on a journey of transformation

This exhibition of work by the Syrian-born artist Simone Fattal (b1942) is her first solo show in the UK and it is quite simply staggering. In creating a significant new sculptural environment, she reimagines the gallery at the Whitechapel as an enormous kiln, helped in her imaginings by the rather rough-hewn bare-brick walls of the space. It is occupied by just 21 objects, with some grouped together, so there is a great deal of room to walk around and consider objects from every angle. Despite the cavernous space and the relatively modest size of the objects, their presence is considerable and they somehow work together to convey journeys and stories according to Fattal’s accounts of history and memory. It is perfect. 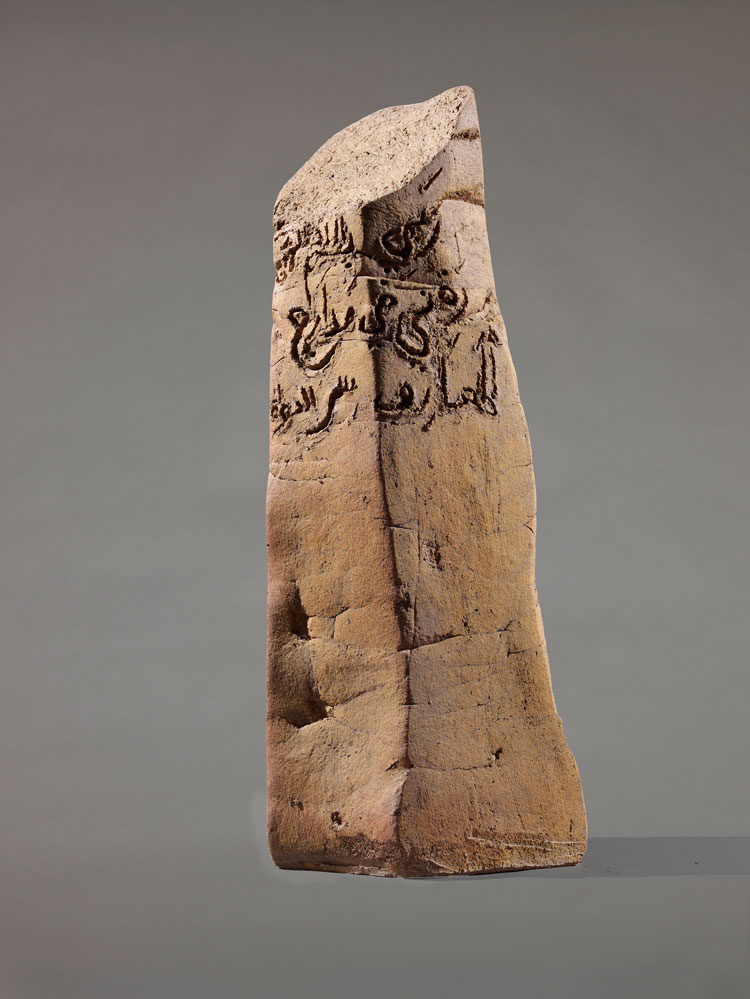 Central to this exhibition are five figures, four ceramic and one bronze, each bearing the marks of the artist’s hand. The figures are abstracted with just enough information for us to understand them as individuals. We are told that they are embarking on a spiritual and physical metamorphosis, and their abstracted construction certainly supports that interpretation. At times, they appear frail, damaged, incomplete, only partly formed, and yet their presence in front of us is simultaneously unsettling and reassuring. They may appear as strange, ancient relics, but their humanity is clear enough. The five appeared to me as sentinels in time and space, safeguarding an underworld of mythological or perhaps religious significance, defenders of the peace. Equally, they might denote the war-torn bodies of those caught in conflict. In this equation, Fattal’s Walking Man I, II, III and IV become the walking wounded. Stele (2008) and Stelai I-V (2018) are monuments of, and to, the ancient world, stoneware adorned with text and ornamentation, waypoints on the journey. Again, I think of sentinels of time and space, perhaps defending a border between worlds. Fattal says they are warriors and represent us all.

There is ample time and space to reflect in this exhibition, and the work deserves it. The larger objects, on an almost human scale, quietly draw us in, with every smudge of clay, crack and crevasse demanding our attention. They speak of human frailty and instil in the viewer a desire to help, hold and mend. In the end, of course, they are sculptures, so how do we honour that desire? We honour it, in part at least, by referring to the ideas behind the work and reflecting on them. 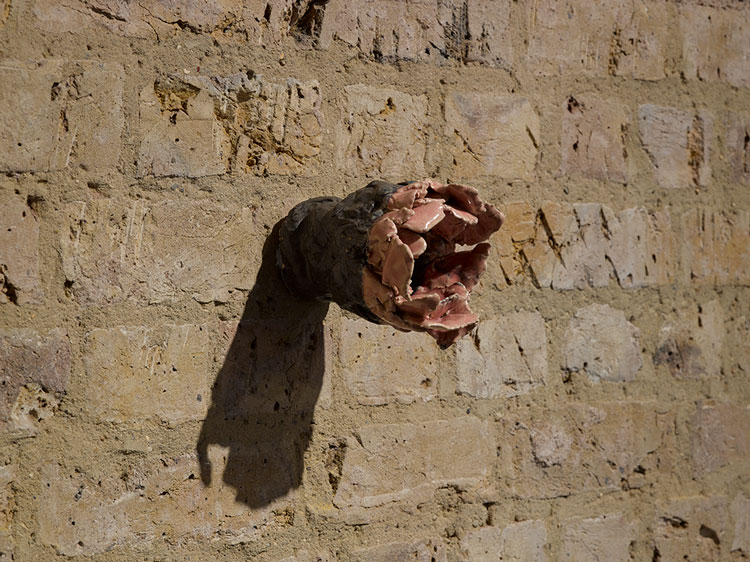 Fattal’s work has been described as a mixture of “poetry, pottery and philosophy”. It is a handy alliteration, although I would hesitate to call her work pottery. It is often stoneware, sometimes glazed, but it is sculpture. You might say this is just semantics, but these things matter. As Etel Adnan explained in 2018: “What do we mean by ‘sculpture’? It’s a three-dimensional object that transcends its utilitarian purpose and is pleasing on a higher level. That is what is meant by a sculpture.”

Now almost 80 years old, Fattal was educated in a Catholic convent in Beirut from the age of 11 and studied philosophy at the Sorbonne in Paris, where she was especially interested in the writings of Maurice Merleau-Ponty on phenomenology. When she returned to her family, by then in Beirut, she began painting and she visited archaeological sites almost weekly. She met Adnan, her life partner, in the early 1970s. When the Lebanese civil war began in April 1975, the pair travelled to California for the summer. When Adnan became ill and unable to travel, they stayed longer than planned. Failed attempts to return to Lebanon found them settling in Paris for a while before leaving for the US in 1980. Exiled from Lebanon and unable to paint in her new surroundings, Fattal established the Post-Apollo Press in Sausalito, California, in 1982, publishing experimental prose and poetry. 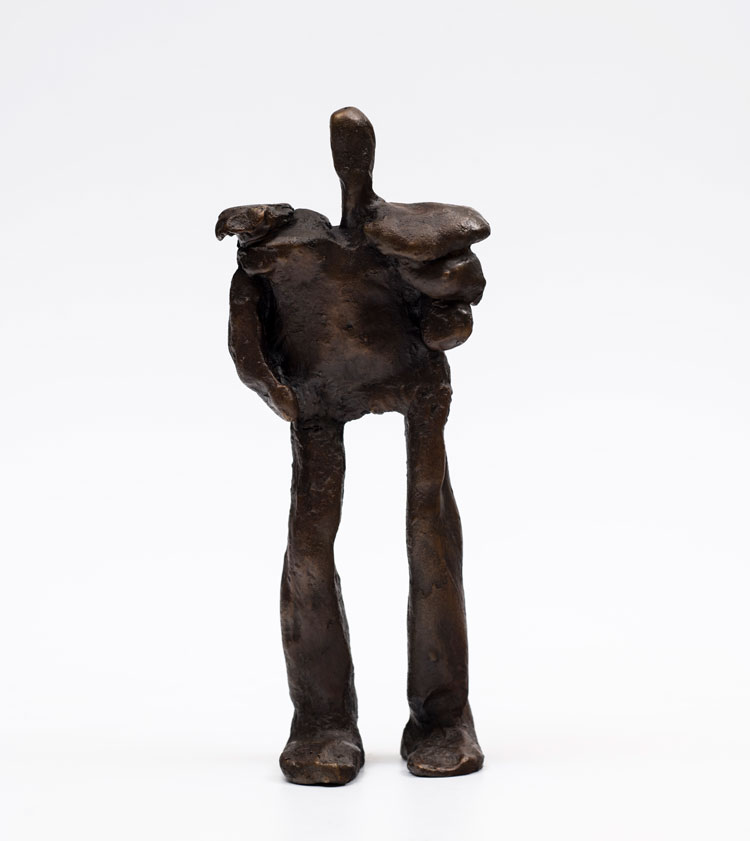 It wasn’t until much later that Fattal returned to the studio (studying at Marin College and San Francisco Art Institute) and began to make her abstracted figures. She started making her clay figures in 1988 and, between 1988 and 2000, was guided by the ceramicist John Roloff, a visual artist with a background in science. Fatall’s first solo exhibition of these early experimental clay figures took place at the Galerie Janine Rubeiz in Beirut, in 2000. Making in clay is important for Fattal, who says: “With clay, a piece is always animated. Sometimes I have to work in bronze, but it doesn’t talk to my heart in the same way.” Yet clay does not become animated by itself; it is Fattal’s treatment of it that breathes life into her work. Figures such The Master or Walking Man I are both poignant and poetic. Talking to Hans Ulrich Obrist this year, Fattal said: “Poetry has always been very present in my work. I can say that the themes I find in poetry are often found in my work, because how do you talk about other things without talking about important things?” 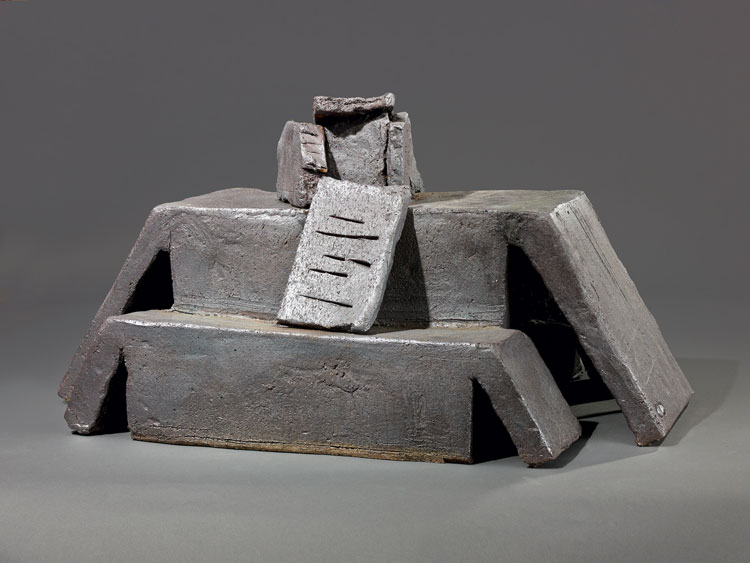 The five figures in this exhibition are not alone. They are surrounded by a number of much smaller sculptures, also made of clay, representing their inner lives. There is Angel with Shield (2021) to protect them and Tree (2021) representing knowledge. The Ziggurat (2014), seat of the gods in ancient Mesopotamia, is a temple in the form of a terraced pyramid, signifying increasing levels of self-awareness, “finding oneself”. There is The Ladder, Centaur, and Cloud, too, all from this year.

Fattal’s six black-and-white etchings, drawn from childhood memories of Damascus, act as partial maps in an otherwise bleak landscape. These images are spare with no unnecessary strokes. They are all the figures have available to navigate by. They, like us, are finding a way through life. 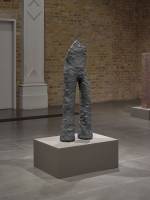 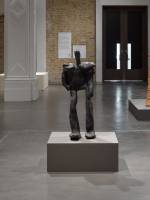