His paintings draw on the aesthetics of everyday technology, the shapes that, for example, make up a tape cassette or speakers, without referencing particular brands so that the viewer can project his or her own feelings and memories on to the image. Jeong explains to Studio International what drives his painting and his latest Interface series. 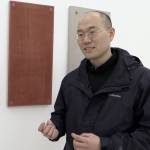