The Scythians are coming to the British Museum this autumn and we have more in common with these ancient nomads than you might imagine, as curator St John Simpson explains 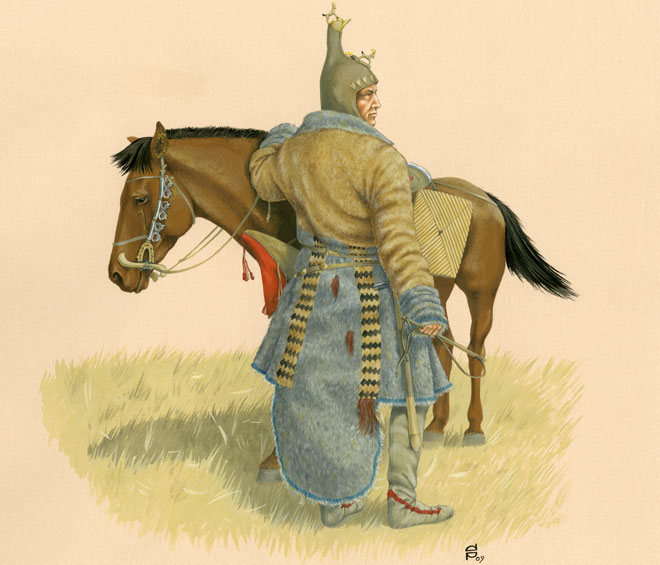 “It’s probably the oldest cheese in the world,” curator St John Simpson tells me over a cup of coffee in the British Museum restaurant. “I certainly haven’t come across any older.” The cheese in question was found buried with a horse as part of a larger complex in the Altai region of Siberia and is almost two and a half thousand years old. It was discovered remarkably well preserved in an embroidered pouch, looking to the modern eye like a ball of mozzarella. Scythian burials contained all kinds of things (and people) that were deemed helpful in the afterlife, such as jewellery, gilded weapons, rich silks, collapsible tables, drinking vessels and, rather grimly, attendants and concubines. Despite their peripatetic existence on the remote plains of central Asia, they were, it seems, appreciative of the good life. 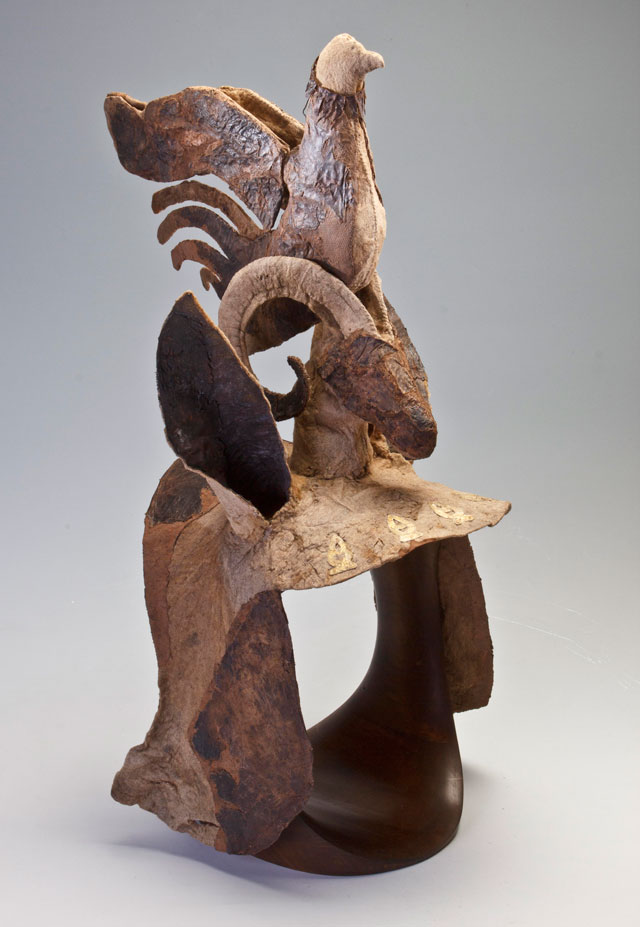 Life on the Eurasian steppe could be brutal, but aside from a penchant for sticking pointy axes into each other’s skulls, the Scythians were not all that unlike us in their tastes. Men and women wore elaborate tattoos depicting fantastical interlocking beasts across their shoulders and backs, and there is evidence of the use of acupuncture for pain relief. The Scythians are also known to have smoked marijuana. The ancient Greek historian Herodotus, who spun some tall tales in his time, has proved remarkably reliable when it comes to describing these nomadic horsemen and their habits. Herodotus talked about smoking pot as a ritual and, says Simpson: “It’s unclear whether he observed it or whether he was given a very good account.” Or joined in? “He does wax quite lyrical about it, so who knows! It’s happening on a very regular basis. Is drinking alcohol on a Friday night ritual or social? These things sort of overlap.” 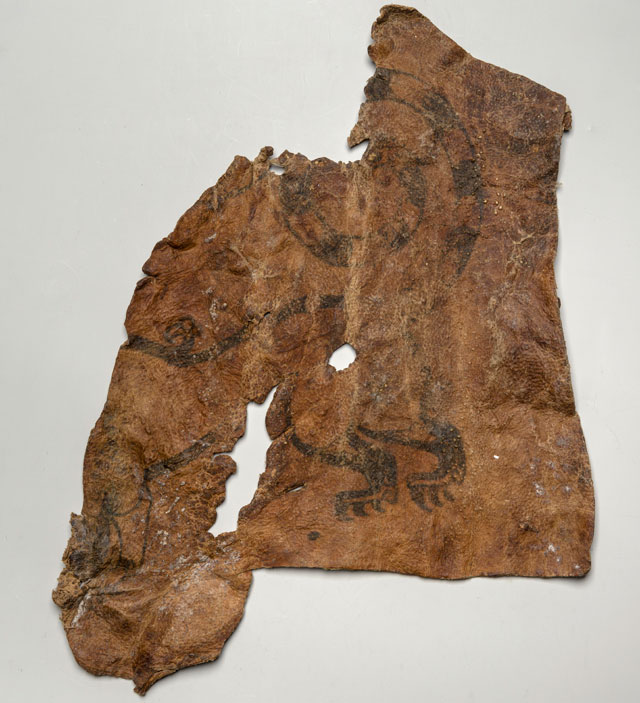 Tattoo. Part of human skin with a tattoo. From the left side of the breast and back of a man; Pazyryk 2, Late 4th - early 3rd century BC. © The State Hermitage Museum, St Petersburg, 2017. Photograph: V Terebenin.

A recreated “hemp tent” will go on display in September, along with sections of tattooed skin that once belonged to a middle-aged chieftain who died a violent death in hand-to-hand-combat. The man’s skin has survived partly due to the Siberian permafrost and partly because his body was embalmed before he was buried. More often than not, Scythians died while travelling a long way from sacred burial sites, so their remains had to be preserved until their kin could take them to the appropriate location. Summer was the best time to do this, as the ground was too frozen in winter to dig what were often huge burial complexes.

The Scythians were also fond of hats, and women balanced narrow wigs on their shaven heads. Some of these elaborate constructions reached up to 60cm in height. Herodotus tells us that the men were bearded, but only clean-shaven individuals have been found in excavations. However, the man whose tattooed remains will be travelling to London in September was buried with a false beard, suggesting that shaving the face may have been a part of burial preparations and it is possible that the tie-on version was necessary to avoid any barefaced embarrassment in the hereafter. 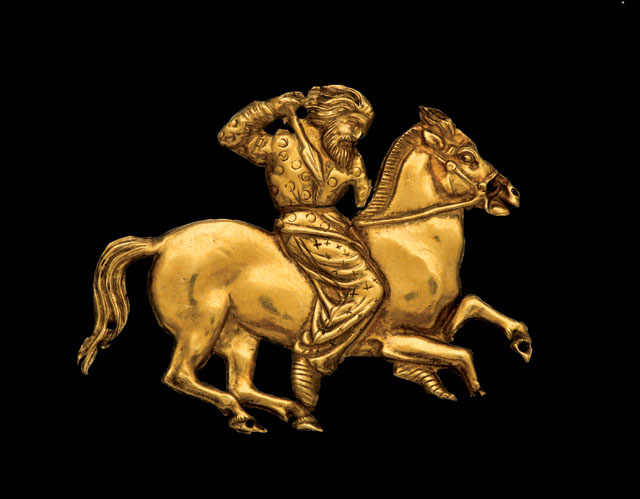 Scythian rider. A gold plaque depicting a Scythian rider with a spear in his right hand. Gold. Second half of the fourth century BC; Kul’ Oba. © The State Hermitage Museum, St Petersburg, 2017. Photograph: V Terebenin.

In Scythian culture, which lasted several centuries, fashions were frequently updated as tribes regularly came into contact with their sedentary Assyrian and Greek neighbours and swapped ideas through trade, battle and women. Brides-to-be sometimes travelled hundreds of miles to join their new families with trousseaus bursting with jewellery and curiosities. “You can imagine the social impact of that,” Simpson tells me. “It might not go down too well, but on the other hand, if you’ve never seen a mirror before, you’re going to want a mirror if you want to look good.” Men, too, coveted novel accessories: “If a man rides in from several hundred miles away with a different form of belt buckle, all the blokes will want a bit of that!” Cultural exchange cut both ways. For a few decades in the sixth century BC Scythian archers were popular subjects on Athenian pottery and the Scythians even commissioned gold jewellery and drinking vessels from Greek craftsmen.

But it wasn’t all exotic luxuries and fraternising with the Greeks. The life of a Scythian warrior was a dangerous and physically demanding existence, as the tattooed chieftain testifies to. He met his demise at the business end of an axe that was repeatedly driven into his skull. There is also evidence that women and men sustained serious injuries failing from horses and, much more surprisingly, these nomadic people also suffered from diseases that we tend to think of as purely modern scourges. An MRI scan of a young woman’s body revealed that she died of breast cancer and a middle-aged man of high status was found to have had prostate cancer. His is the earliest attested case of the disease.

There is, undeniably, a huge amount, not to mention more than two millennia, that separates us from Scythian culture. Both the strange and the more familiar will be on display at the British Museum from this September. But we have enough in common to suggest that an evening spent around a campfire with a group of these ballsy nomads might not have felt like an entirely alien experience. Sure, you might want to put some distance between you and the nearest man sharpening his battle-axe, but these people would, no doubt, have had some good stories to tell. Herodotus was certainly captivated. And I can’t help but wonder whether he was as enthusiastic about Scythian cheese as he was their hemp tents. 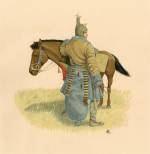