This comes as a timely exhibition, accompanied by a well organised and comprehensive catalogue,1 no less than a redefinition of the significance of the enforced exile of Kurt Schwitters for Britain, one much diminished by national indifference as much as for his own career here, so prematurely truncated by illness. Here too came the presence of the powerful creativity of the Merz tendency, a potential bonus for British art, first established in a culturally vital Berlin as long ago indeed as 1918 to describe his own work at that point, later exhibited in the Galerie Der Sturm, Berlin the following year.

Many years later, Schwitters’ own European reputation already assured, he was displaced: he first took refuge from the antagonistic Nazi Reich in Norway. In fact there had already2 been a wary review of contemporary German arts and culture of the time in this journal’s predecessor The Studio. Then in July 1938 there followed, in London, the Exhibition of Twentieth Century German Art curated by Herbert Read, intended as a response to the notorious Entartete Kunst (Degenerate Art) Exhibition, Munich 1937: but this was in the current British mood of a wary appeasement, rather too muted in its criticism. There duly followed a review in The Studio,3 ostensibly putting a good face on this effort by Read.

For Schwitters the time in Norway was soon to be limited, since Norway was rapidly occupied by Germany in April 1940. Escaping from Norway to the port of Leith, Edinburgh, in June 1940, he was the following month transferred to Hutchinson Camp (‘P’) Douglas, Isle of Man. Fortunately he was released in November 1941 and found accommodation in London at St Stephens Crescent in West Kensington London: to some disappointment he found that while a number of important galleries continued open during the war, their focus was perhaps understandably primarily on English Art, and they seemed mostly uncomprehending, oblivious of the work  and presence in their midst of this important European figure. Inevitably there had been a natural concern that all English culture was now at risk from invasion.

By December 1944 however, this had all changed and the Modern Art Gallery included in a solo Schwitters show no less than 11 collages, 18 oil paintings and ten sculptures. Herbert Read introduced the exhibition catalogue with a highly complimentary essay, which also emphasised the historic importance of Merz as derived by Schwitters, to European contemporary art. Most importantly, all of the works had by necessity been made since Schwitters’ arrival in England. On the down side, coupled with the lukewarm reception previously that his work received in London at the time, now came the news that his “Merzbau” work in Hanover had been destroyed in October 1943 by bombing.

One year later his wife Helma, still remaining in Germany caring for elderly relatives, died of cancer but not before she had written to their friends Josef Albers and his wife in America to say that she was not being permitted to send her husband’s work abroad owing to its “decadence” according to the German authorities.

To Schwitters’ compatriot fellow migratory artists, (an earlier wave had now safely settled in America) looking back at Europe, it must have seemed that Armageddon itself had been let loose. The remarkable thing about Kurt Schwitters at the period of major setbacks was his stoicism, which seemed never to fail. John Elderfield4 was right to join as one episode the exile to Norway and to Britain, one in which his spirit and yet also his practical turn never weakened so to leave him at a loss. Concepts of dislocation however became prevalent in his work.

Given the poor reception that Schwitters had found earlier in London, he now had few alternative directions to pursue. There were ties with his son, Ernst now also in London, and his own new companion Edith Thomas (initially all lived from December 1941 in St Stephens Crescent, West Kensington, London). In 1942 both moved to Barnes, West London, with his son and daughter-in-law. That September he visited with Edith Thomas the Lake District for the first time. That March he had exhibited significantly in New Movements in Art: Contemporary Art in England (at the London Museum, Lancaster House). Until 1944 this was an intensive period of renewed work, but in April 1944 he suffered a stroke with the temporary paralysis of his body, and was nursed back to health by Edith, following which he had that first solo show at the Modern Art Gallery.

At midsummer 1945 they moved to the Lake District. But he had clearly weakened further and contained himself with landscape works and portraits, for his friends. However he had a further stroke in February 1946. He remained on watch to do what could be done to save the remnants of his Merz constructions in Norway and Hanover. Indefatigably, he began work on a new Merzbau in Cumbria. But ill health was stalking him. The Museum of Modern Art, New York, had awarded him a $1,000 Fellowship, also a marker for a future Collages Exhibition (with others) discussed earlier. The grant was was ostensibly intended to support his current Merz work. But soon after he was taken to hospital with a critical hemorrhage. Although not old by current standards, Schwitters’ time was clearly running out. The Lake District, rather than London, was deemed the best sanctuary for a sickening man, and he died finally there on 8 January 1948.

It could be claimed that this victim of a repeated displacement had taken to escape too late, too critically for his career. But everything in his personal life emphasises his absolute loyalty to family, (and partner) nor ever mutually exclusive. In the core of Kurt Schwitters’ life lay a humanist ethos, expressed in the series of Merzbau, as much as in the sculptures, and as in the minutiae of the collages: reflections on the unpredictability of urban life as much as in the incidental portraits and landscapes and always graced with humility. To revisit the Hutte in Norway is to be reminded of the elemental content in Schwitters’ creativity, of the spirituality of his relation to landscape. The Lake District replicated this environment.

Where was the influence of Schwitters most felt?  Certainly by both Richard Hamilton and Eduardo Paolozzi, and indeed influencing in attitude Nigel Henderson, and so permeating through British Pop Art. Paolozzi was emphatic about this5 with a later and revealing observation. He had while still at the Slade been enabled by E. T. Mesens of the London Gallery to study the collages still there in 1946. Paolozzi commented: “Schwitters made his collages (most likely) according to the laws of chance-very much part of recent art history. Although one must retain the image of raw material-rejected rubbish such as used bus tokens-the dynamic part is the commitment of finally sticking down the objects. The excitement truly comes when the artist at that moment actually goes beyond his own preconceptions and aspirations.”

Of the later works, as postmodernism encroached upon curated reservations in the 1980s, it was evident that John Elderfield sensed a weakness there: yet Nicholas Wadley6 in his appraisal recognises the ecumenical ranging in Schwitters’ work as acceptable in sequence: a difficult admission nonetheless. More absurdly, there have been efforts to tie in such contemporary artists as Damian Hirst too; the mere idea of which seems obsequiousness taken too far. Kurt Schwitters’ vital 20th-century contribution to art was in a class of its own. This exhibition intelligently provides the fuller context for Schwitters’ achievement in all adversity. Fortunately too the live, historic continuity of his Merz concept, against all odds, has survived here too, which indeed it might not otherwise have done, given the circumstances of estrangement and displacement, which had characterised the artist’s survival in England 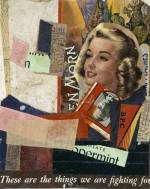 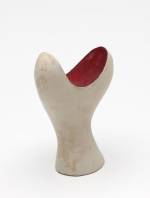 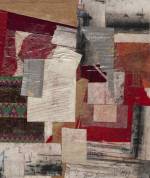 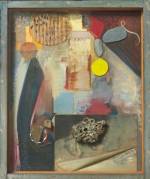