Just what is it that makes Richard Hamilton’s works so different, so appealing? Sadly, the current exhibition of late works by Hamilton (1922-2011), at the National Gallery, doesn’t really do justice to his prolific and multifarious oeuvre, but, luckily, a major retrospective of his work is due to tour Europe and America from 2014.

Nevertheless, it seems appropriate that the National Gallery should host this small-scale show, since it has long been a place of significance to the artist, who sadly died during the preparations for what might be seen now as a touching tribute.

Hamilton regularly appropriates or quotes directly from others’ art.  Alongside his allusions to Old Master paintings, he has long championed the works of Marcel Duchamp (1887-1968) (who later became a friend, and for whom he organised the first major European retrospective, The Almost Complete Works of Marcel Duchamp, at the Tate Gallery, in 1966, where he also showed his own approved facsimile of The Large Glass, 1915-23) and James Joyce (1882-1941) (for whose Ulysses, 1922,he produced a series of illustrations), as well as making reference to pieces by Roy Lichtenstein (1923-1997) (A Little Bit of Roy Lichtenstein For… , 1964) and JasperJohns (born 1930) (The critic laughs, 1968). During his years teaching at the Royal College of Art, he keenly promoted David Hockney (born 1937) and Peter Blake (born 1932), and, whilst at King’s College, Newcastle, many hold him solely responsible for the salvation of Kurt Schwitters’ (1887-1948) Merz Barn. Most of all, however, Hamilton borrows from and repeats himself, producing series of works with minimal alterations, and continually reworking favoured motifs. As an example, he was still working on a new version of his famous Swingeing London (1967-73) (news clipping- and photo-collages depicting his dealer, Robert Fraser, and Mick Jagger, being arrested on drugs charges) right up until 2009.

As I stood before the grand and intriguing Hotel du Rhône (2005), a group of visitors beside me were discussing Hamilton’s peculiar take on illusionistic painting, one whereby he is keen and competent to create the illusion of 3D spaces on 2D canvases, but simultaneously insistent on making his viewers aware of their 2D nature. “He’s playing with perspective,” exclaimed one exasperated member of the group, “so why am I trying to get a logical perspective on it?! I’m struggling!” Certainly, Hamilton is a master of such trickery. Overly smooth, airbrushed, and Photoshopped, there would be a sense of surreality, except that Hamilton’s care to facilitate “a state of maximum self-awareness and objective perception of the complex contrivance he confronts”1 is opposed to the approach of the Surrealists. Perhaps, instead, he is creating a Baudrillardian hyperreality, an existence in a digital realm, whereby the viewer is driven to question modern day life.

Undeniably his best-known work must be the collage Just what is it that makes today’s homes so different, so appealing? (1956), created for the group exhibition at the Whitechapel Gallery, This is Tomorrow (1956).  At the outset, Hamilton typed a list of categories to include in his work, which read: “Man Woman Food History Newspapers Cinema Domestic appliances Cars Space Comics TV Telephone Information.” Replete with these markers of Modernism and signifiers of 1950s affluence, the work is often hailed as the first piece of pop art, largely owing to the word “POP” itself, emblazoned on the lollipop being brandished by the bodybuilding he-man, standing at the front. With overtones of commodification, consumerism and mass consumption, this work set the tone for the rest of Hamilton’s career.

“It seems to me that the artist, the intellectual, is not the alien that he was and his consumption of popular culture is due, in some measure, to his new role as a creator of popular culture,” said Hamilton in 2003.2 And keeping up with developments on this front was also very important to him. In 1987, he was asked to take part in a series of BBC programmes, Painting with Light, and, through this, introduced to the Paintbox computer. He has used digital image processing equipment in his works ever since.

Hamilton nevertheless always referred to his practice as “painting”. An annunciation (a) (1994-2004), for example, “a direct response to Fra Angelico’s great annunciation fresco to be found in the corridor of San Marco,” depicts a bare white-walled interior, with a secondary image hanging therein. This, in turn, depicts a photorealistic image of seated female nude taking a phone call. Reading from the title, the cordless telephone is a stand in for the angel messenger – thus making this equally as much a comment on contemporary lifestyle as Just what is it…? was back in the 1950s.

In the similarly themed The passage of the angel to the virgin (2007), the angel’s wings and right foot are blurred in motion. This is a reference to Duchamp’s Nude Descending a Staircase, (No. 2) (1912). The motif of the foot also plays a significant role in what is both the exhibition’s, and Hamilton’s own, final work: the triptych Le Chef d’oeuvre inconnu (2011). Produced during the final 18 months of his life. Based on a short story by Honoré de Balzac (1799-1850), about a young artist called Nicholas Poussin, it depicts three artists, Poussin, Paubus, and Freynhofer, here in the guise of well-known self-portraits of the real Poussin (1594-1665), Titian (1485-1576), and Gustave Courbet (1819-1877), who met in Freynhofer’s studio to admire a painting of his which he claimed to be so perfect that the woman on the canvas might come alive. Echoing the tale of the emperor’s new clothes, Poussin and Paubus find the canvas to be incoherent: a mass of scribbles. All, that is, except for one perfectly painted foot. They tell Freynhofer this truth, but he can’t bear it, dies in the night, and his studio burns down. That Hamilton’s final work – his own “unknown masterpiece”, incomplete and imperfect – should relate this tale, is, then, both tragic and fitting. The greatest irony of it all, however, is that Hamilton had also been planning to ask a well-known supermodel to model the foot of the odalisque, but this never materialised, and so this – the foot – is the one bit of the final digital approximation which remains untouched, the opposite outcome to that of Balzac’s tale. 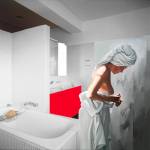 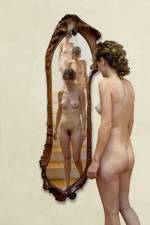 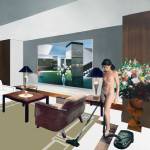