Travelling through countryside around the northern reaches of Paris, you catch sight of white escarpments of rock protruding from the landscape. Plaster of Paris is the traditional name for these mineral deposits of gypsum, found in abundance near the city. Plaster as a material predominates throughout this significant exhibition 'l'atelier d'Alberto Giacometti' at the Pompidou Centre in Paris until 11 February 2008.

Even when Giacometti could afford to cast in bronze, he sometimes painted his sculptures to reflect the matt white light of plaster. Not least, some sections of plaster wall with drawings were extracted from his studio and are now on public view here for the first time. Archive photographs illustrate the removal of the walls using techniques similar to those used when Kurt Schwitters' 'Merzbau' was removed from a farm building in Cumbria and relocated to Newcastle University.

Many exhibitions of Giacometti's work have taken place over recent years, but this is unique in its use of previously unseen material taken from his studio after his death in 1966 and archived by the Fondation Alberto et Annette Giacometti. A full history of his life is here in abundance, but the essential core is an attempt to invoke the ambience of the studio, his working process and the relationship with his models.

Although Giacometti's growing reputation and commercial success in the late fifties and sixties could have afforded him more palatial and comfortable surroundings, there is compelling evidence in this exhibition that, like Bacon's occupancy of a cramped mews flat, Giacometti's existential existence and creativity was rooted and engrained in the very walls of his rambling house and studio in Montparnasse.

The exhibition is chronological, moving through a spatially organic sequence of works from key periods, groups of unfinished works from the studio floor and photographic archives; revealingly there are many references to his interests in historic works from Egypt, Classical Rome and the paintings of Velázquez.

A key section of the exhibition has a low podium with a grainy video of Giacometti painting. In the background you can detect studio furniture, sculpture and wall drawings; look up and those same elements are there on the podium, an installation documentary. This area had a crowd permanently in awe. It was the nearest you could probably get to standing behind the artist's shoulder in his studio.

A room devoted to his surrealist works is especially strong and revealing in the way he adapts sculptural forms to provide a domestic function like lighting or a vase or decorative cornice work. One particularly amusing piece from 1931 is a plaster entitled 'Tray to dispose of pocket objects'.

This is an exhibition where exploration of the different sections initially rewards, surprises and then prompts a retreat to early parts where, you can trace the origins of influences, confirm sources and the trajectory of his career, can be tracked.

'I have restless eyes', he told the interviewer for Studio International in 1964. This magazine, like others, is displayed and points to a burgeoning acknowledgement of the artist's importance in the 1960s. The austere spiked forms of Armitage, Chadwick and Butler in British sculpture of the day were all related to the new language of Giacometti.

For a fundamental understanding of the work, the initial section on the landscape of Giacometti's childhood and his family are key. His father was an impressionist painter and engraver of note and Giacometti's early and precocious talent was undoubtedly underpinned by the cultural aspiration of his family.

The alpine landscape around Stampa, his family home, is also significant; an early painting from 1930, 'La Montagne', is full of interest with the mass and texture of mountain forms predicting the vibrant surfaces of his late figurative sculpture. The craggy surface of the mountain is incised and almost cubist, full of alpine sensibility and different altogether to the soft modulated forms of Cézanne's 'Mont Sainte-Victoire'.

Vistas were important to Giacometti and especially how figures appeared to him in space; he drew the spaces in his studio perpetually and during installations of his work he would worry about a centimetre difference in the height of a plinth.

With this in mind, one of the curatorial triumphs of this show is to encounter the careful, layered views of gaunt silhouetted figures against the glass facades of the postmodern engineered structures of the Pompidou with Sacre Coeur as a backdrop. Where the Richard Rogers building externalises its structure, by contrast the Giacometti sculptures are deeply internalised and contrast richly with this setting.

The effects are stunning and reflect Giacometti's continuous interest in how his work was perceived, the parameters of a base, the way a figure sits within a frame. The top floor of the Pompidou becomes one large space frame.

David Sylvester, in his celebrated 1994 book Looking at Giacometti said that, 'One of the most satisfying qualities in the way Giacometti's sculptures re-create appearance is how bodies disappear at their edges - a sort of three-dimensional sfumato'.1

Curiously, this very quality ensures you can still enjoy the work with a host of other people, as they ebb and flow, walking and pausing to scrutinise the tiniest plaster fragments. It all seems part of the theatre of Giacometti.

His work famously only portrays men walking while the women are static. Vanessa Beecroft's static displays come to mind as a recurrence or reinterpretation of Giacometti's grouped figures, as do the upright steel columns of Barnett Newman.

The surfaces, however, are never static; this is an exhibition that oozes material sensibility. Many works have as part of their label, 'Plaster re-worked with pocket knife and painted'. The sculpture, like the painting, is multi-layered, worried, cut, carved, incised.

In many instances the plasters are enhanced with pencil line as if there were a constant flux between the sculpture, painting and drawing. In technical terms there is ample evidence of the working processes involved.

The unexpected beauty of the armatures is in evidence, and in many cases, armature and figure are one and the same. Casting processes, seam lines, clay residue in plaster casts, parting compounds are all there to be studied and forensically analysed to try and second-guess his every move, and his motives.

Scale was not important to Giacometti, at least in the sense that while ambition and maturity with many artists goes hand in with increasing size, Giacometti was interested how he perceived figures, not a portrayal of scale-based knowledge.

Consequently, many heads are smaller than life-size and some of his most powerful figures are minuscule. The domestic scale can also be traced to the domestic-sized rooms that made up his studio complex.

It's hard to imagine a more comprehensive exhibition of Giacometti's work; it succeeds on every level. When the celebrity of so many contemporary artists confronts us daily, it is refreshing to sense the gritty determination of an artist who did his own particular thing. After the experiments with surrealism you see him calling up the rich skills of his youth and creating an output so original and unfettered by anything around him other than his primary source, the existential connection with the model in his studio. 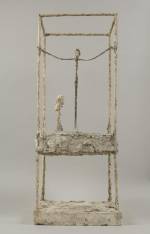 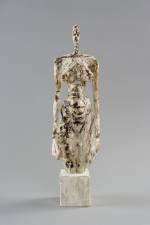 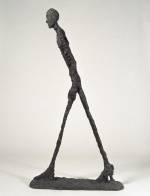