This winter a number of exhibitions in London, such as Schwitters in London at Tate Britain and The Bride and the Bachelors: Duchamp with Cage, Cunningham, Rauschenberg and Johns at the Barbican Gallery, have provided a rich atmosphere in which to reconsider the development of collage and assemblage in the last century. An exhibition of 11 paintings made between 1992 and 2009 by the late Catalan artist, Antoni Tàpies (1923–2012), on view at the Timothy Taylor Gallery, London until 13 April 2013, although small, adds another voice to the debate about the shifting conceptual and physical boundaries between collage, painting and drawings.

The works on view at Timothy Taylor are described as paintings, but in person one is immediately seduced by their tactile surfaces. In Escrits i formes sobre materia (2009) the edges of the large, sand covered canvas are inscribed with scrawled words and sketches. The thick black lines, written with a wide paintbrush reveal a macabre collection of images – a fish’s head, a severed leg, and male and female genitals are all hectically interspersed with incomprehensible words. It is like one is reading hieroglyphics written by the hand of a graffiti artist – the language is both incomprehensible and familiar. Here imprints of a hand, in the sand that covers the canvas, balance the stroke of the paintbrush, and the written line. This impression evokes the artist’s touch and transforms the work into a low-relief sculpture, yet there is also an almost childlike quality to these prints found in recognition of a shared desire to sink one’s hand into the malleable sand. Yet this imprint is also the mark of a time and action that has been, a past presence literally created by an absence or displacement of material.

Marks made in the sand also appear in Materia i diaris (2009) in a series of cruciform shapes. Again there is a sense of weight tied to the impressions, a physical connection to a body, which fights against a sense of impermanence and a fear that a wave will come. Seven ripped sheets of newspaper are scattered across the sand covered canvas. Some of these pieces of newspaper are slightly crumpled and wrinkled, conveying a physical sense that they may have once been wet and the random arrangement of the individual pieces across the surface recall an image of litter blown by the wind across the beach. These echoes of natural elements, the water and the wind, give the work a sense of movement and make one see the composition more as a landscape than as an abstract assortment of forms.

Moving closer to the canvas, one is drawn to read the fragments of newspaper, an apparently random selection filled with film times, racing tables and sports scores, economic forecasts and, most poignantly, a series of obituaries. The heading of several of these obituaries contains a cross, which creates an interesting dialogue with the inscribed cruciform shapes in the sand. In the newspaper, the function of the cross is clear, yet in the sand, these marks are still tantalizing ambiguous; one has a curved tail – is it a “t”? Four more cruciform shapes marching vertically down the center of the composition are irregular in form, suggesting that they are more random markings made absent-mindedly in the sand, rather than devotional symbols reverently copied.

Images by Tàpies are often humble and in Tassa sobre gris (2001), for example, a single cup and saucer are rendered in black spray paint in the middle of a large grey expanse of canvas. Yet the large expanse of grey could also be the face of a building, marked with a graffiti tag. Here two traditions of the “everyday”, or even low, are brought together: the simple, solitary still-life and the often assumed “base” act of marking symbols onto a wall in the streets as a form of protest. In this way, the work brings together both the personal and the public, the pairing of the private act of drinking a solitary cup of tea and the use of graffiti aesthetic. Here the humble and the solitary are raised from the trivial to be shown as a shared experience.

In contrast to the other works in the show, Extensio (1999) and Prajna-Dhyana (1993) are tightly cropped depictions of the human form. In Extensio a tightly cropped image of male genitals and lower torso is built up from the wooden support that is painted black. The male genitals are crudely outlined and the contours of the stomach subtly protrude, conveying a tactile sense of weight and of the body beneath the flesh. Yet this gentleness in the flesh is crudely set against the addition of ample pubic hair – this is no idealised and sanitized nude form. At each corner of the canvas, there are L-shaped brackets a few inches inside the corner, a simple geometric detail that heightens the sense that this is a tightly cropped viewpoint that encourages an investigation of the brutal reality of the weight of flesh and hair. It is a virile image of the male form that is also somehow fragile having been laid bare with all the imperfections.

A similar composition is used in Prajna-Dhyana, but here it is the female form, exposed and almost feral with the unashamed presence of pubic hair. But here the body is marked with a “t” on the left thigh and there are two black crosses just below the vagina. The meaning of these cruciform shapes is unclear, but the writing on the flesh is not so much a tattoo but a scar. One wonders whether the “t” stands for Tàpies and if he is thus claiming the female body or simply showing the body as living flesh that can be wounded?

It is easy to classify works such as Materia i diaris as collage or assemblage, but what of the other works on display? Schwitters always used the terminology of “painting”, “drawing” or “sculpture” to classify works that are now simply grouped under the general term “collage”. For Schwitters, the method of painting wet on wet, used by the artist in his realist work, equally applied to his practice of collage and several accounts describe his covering the entire surface of a work with paste and manipulating the individual pieces across the surface until he achieved the desired composition. Thinking about Schwitters is useful here as it directs us to think about the way in which Tàpies worked with his materials, the way he manipulated them, built up a texture from the flat surface and added objects into or onto the structure.

Since the late 1940s, much of Tàpies work has been characterised by heavily-built up surfaces constructed out of unconventional materials such as marble dust, ground chalk, sand and earth which are often scratched or gouged into with graffiti-like marks or indecipherable symbols.  The artist often scoffed at the suggestion that his art was abstract. In his enigmatic assemblages, Tàpies toyed with the associative properties of his materials and resisted the clear evocation of form or even language in his compositions. While his work often has clear ties to the material world, Tàpies often spoke about a sacred dimensions of his art, but this was removed from his strict Roman Catholic upbringing, and his oeuvre is often described as a meditation on the “void”, that sometimes lie beyond the material world but is only sensed in its absence. Tàpies palette is often limited but the depth in his work reveals itself to those who take the time to move across and over the tactile surfaces, resting upon sometimes incongruous details. 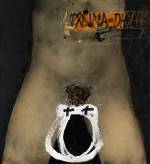 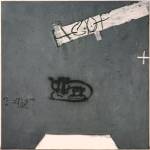