The Chapel of Nôtre Dame du Haut by Le Corbusier at Ronchamp was built between 1950 and 1956. A small, white building that lies conspicuous and easily visible on its knoll for many miles around, it signifies even from afar something extraordinary. Suddenly visible from the road, on the horizon, the form is arresting, bemusing, but easily identifiable from the literature. A piece of over-sized sculpture, rising monolithically out of the site, as if iceberg-like the remaining three quarters of it were rooted underneath the Vosges spur on which it stands. 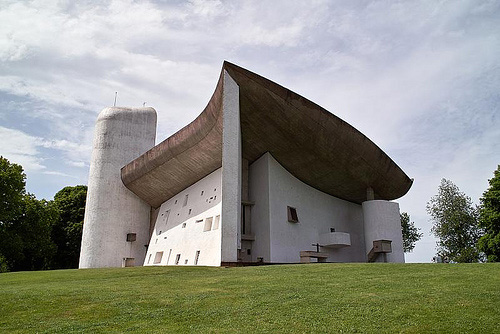 In plan it hails the four horizons in elevation and one is constantly aware of its volumetric three-dimensionality. The steep approach hill is climbed with difficulty and as one rounds a corner, the approach is now such that the chapel looms ahead. The concrete roof shell possesses an elephantine quality in mass. On the datum level, perspective becomes elevation, and one is presented with a façade containing apparently randomised windows of varying sizes, inserted in a vastly thick wall marked with a highly coloured entrance door. Walking round the periphery of the chapel one is constantly drawn out to the surrounding landscape, an outdoor altar sits at the edge on a podium that curves swiftly away, emphasising its rectilinearity (on the east front). A Virgin Mary figure can then be seen encased rather like a preserved bird in a glass case, iconic in presentation, protruding from the wall itself. From every angle the building proposes a third space, enclosed, sanctified and purified. With every footstep the scene changes, providing hitherto unanticipated angles and new formal relationships. A magnetic force seems to draw the visitor/pilgrim inside. There a priest might be saying mass and the acoustics are flawless.

Inside the chapel, where one had expected some imposed discipline of even a subtle degree of suppression and formality there is instead a feeling of freedom of the spirit, a relaxed if pious atmosphere, surrounded by a massive degree of protection within thick walls, and a gallery-full of painted windows that in their simplicity also hold a level of innocence.

If one attempts to fit Ronchamp here into the long sequence of Le Corbusier’s buildings, one immediately realises its role as a turning point. In the words of the architect, “a retrospective judgment is made on the whole of an earnest life of struggle, of honesty, of meticulous research, of constant fight.” This is no less than a personal confessional as much as an embrace by the same of the world itself, an act of redemption.  Here is his work set down, pure and white and sculptural as an offering. Amidst the sprawling naturalism of the Vosges Mountains, the isolated Swiss builder stoops, with just a trace of egocentric purpose. For Le Corbusier, his chapel also replaced an earlier mountain chapel destroyed here by wartime bombing.

Le Corbusier here found his freedom again, after the triumph of the Unite block of apartments in Marseille, and its dimensional and planning strictures. Not that he broke away from the proportional system of the Modulor which he had evolved and which so brilliantly unites the windows at Ronchamp. But in his next programme for Chandigarh there was a new freedom and a fresh approach to landscape form. In his paintings, as Jeanneret, his ‘nom de peintre,’ there was exposed his delight in pure curvilinear form, revived at Ronchamp. There comes from his paintings a constant striving to exploit the curve. The clients for Ronchamp, The Societe Immobiliere de Notre Dame-du-Haut, under the direction of Alfred Canet, were well pleased with the resulting building, which eventually placed the chapel in the architectural stratosphere. Traditional modernist architects in Europe were however unable to understand the new freedom of design ethos now displayed by the master, only later came to realise the extent to which Corbu had himself liberated modern architecture with this small but iconic building. The next most revisionary building by Le Corbusier followed soon after, the new building for the monastery of La Tourette at Eveux sur Abresle, completed soon after.

Although only a three hours drive away across the Vosges Corbu’s early Villa at La Chaux de Fond, a further 50 years back in time, joins with Ronchamp in displaying that special quality of timelessness. Today we can at last accept the measure of greatness that history endows upon both works, as we move through the 21st century. 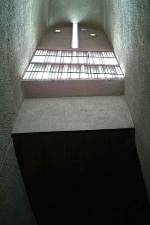 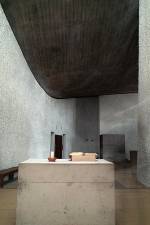